2 1835 or 1855 Letters from J. ? B. traveling in Boston, Massachusetts, to Lizzie back home, presumably Machias, Maine area 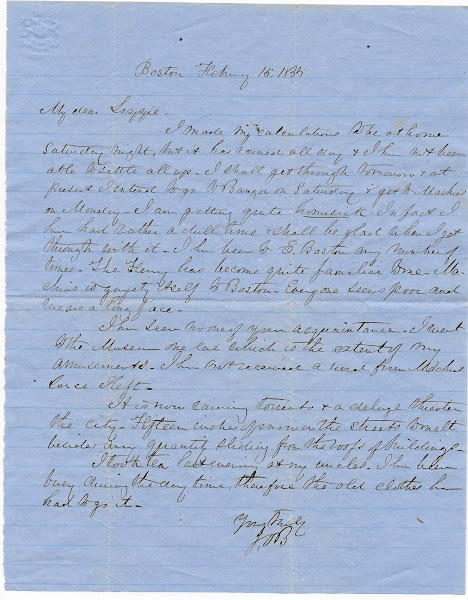 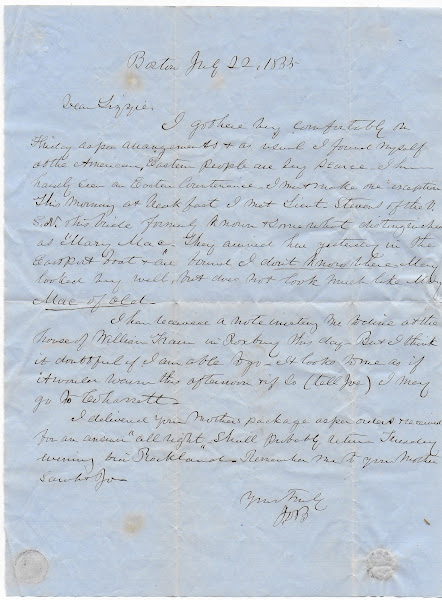 This letter has Lizzie written on the reverse. 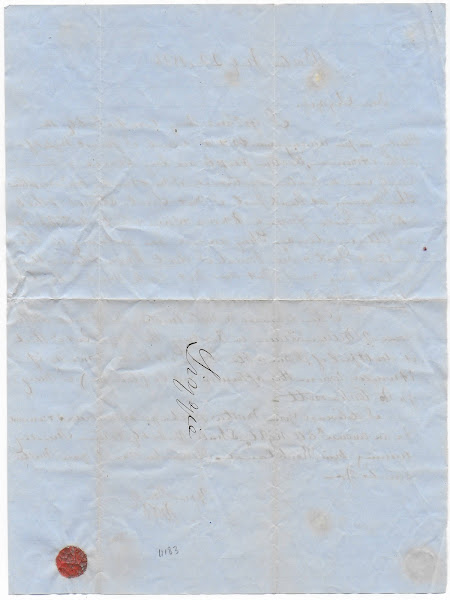 If you have a theory as to the identity of J. ? B. who had a habit of traveling to Boston, Massachusetts from the Machias, Maine, area, and had a Lizzie in his life, please leave a comment for the benefit of other researchers.
Transcriptions - please leave a comment with any corrections and/or additions
February letter
Boston February 15, 1835 [or 1855]
My dear Lizzie,
I made my calculations to be at home Saturday night, but it has rained all day & I have not been able to settle all up - I shall get through tomorrow & at present I intend to go to Bangor on Saturday & get to Machias on Monday. I am getting quite homesick. In fact, I have had rather a dull time & shall be glad when I get through with it. I have been to E. Boston any number of times. The Henry has become quite familiar to me. Machias is gayety itself to Boston. Everyone seems poor and wears a long face.
I have seen none of your acquaintance. I went to the Museum one eve, which is the extent of my amusements. I have not received a word from Machias since I left.
It is now raining torrents & a deluge threatens the city. Fifteen inches of snow in the streets to melt besides any quantity sliding from the roofs of buildings .
I took tea last evening at my uncle's. I have been busy during the day time, therefore the old clothes have had to go it.
Yours truly,
J. ? B.
July or January letter
Boston July 22, 1833 [or July 1833 or January 1835 or January 1855]
Dear Lizzie
I got here very comfortably on Friday as per arrangements & as usual I found myself at the American. Eastern people are very scarce. I have hardly seen an Eastern countenance. I must make one exception. This morning at breakfast I met Lieut. Stevens of the U.S.N., his bride formerly known & some what distinguished as "Mary Mae" [or "Mary Mac"]. They arrived here yesterday in the Eastport boat & are bound I don't know where. Mary looked very well, but does not look much like Mary Mae of old.
I have received a note inviting me to dine at the house of William Train in Roxbury this day. But I think it doubtful if I am able to go. I looks to me as if it would warm this afternoon & if so (tell Joe) I may go to Cohassett.
I delivered your Mother's package as per orders & received for an answer "all right". Shall probably return Tuesday evening via Rockland. Remember me to your Mother, Sarah & Jos.
Yours truly.
J.? B.
The map below shows the inland route from Machias to Boston, but in the 1830s or 1850s the letter writer would have traveled by sea, or, in the case of Bangor, by the Penobscot River.
Posted by Pam Beveridge at 7:14 AM