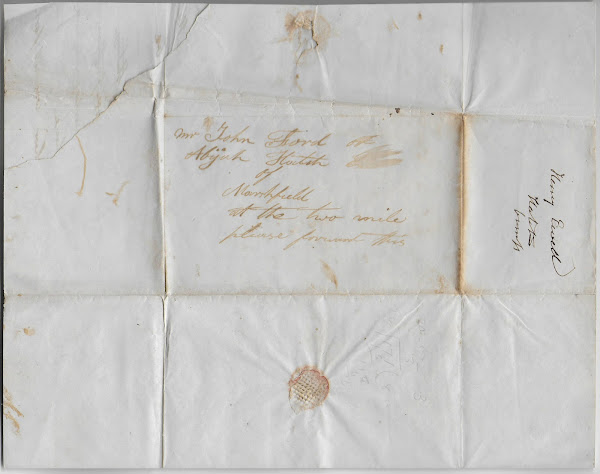 May 25, 1843 letter from Henry Ewell in Medford, Massachusetts, to John Ford and Abijah Hatch in Marshfield, Massachusetts.
Transcription at the end of this post.
The letter regards the purchase of real estate and mentions the following:
If you can identify any of these people and/or have information to share, please leave a comment for the benefit of other researchers.
Transcription - if you spot errors, please leave a comment so they can be amended:
Medford May the 25th 1843
Mr. Ford, I payd the Eighty dollars to Mrs. Conant and I sent the balance down to Abijah Hatch by George Conant and took a receipt from him and her & Abijah Hatch will acknowledge that they have received the money from me to pay the legacy that the ___ [Heirs ?] Estate was subject to - if not I will send the receipt down to you - when the deeds are made out. I want Elisha Hatch to give me an obligation to pay the encumbrance on the heirs estate through the old ladys life as per agreement - from the first of May 1843 through her whole life.
I wrote to Uncle I. Ewell and told him to act for me in the division of the marsh and what he does will be right in the dividing of the same.
I received a line from Israel Hatch stating that they were going to sell those pastures near Constant Oakman's on Thursday this week. Tell him I do not want to purchase. My object of buying of the heirs was not for profit.
I have bought all the right and title of the Estate of the late Anthony Hatch deceased of the heirs of the same. When I was down I thought that I would have the deed made out to I. & H. Ewell but I have thought different since. I want the deed made out to me and after we divide I can give him a deed of his half. The deed that the heirs give me is to have nine seals.
Yours with respect
Henry Ewell
Posted by Pam Beveridge at 6:45 AM