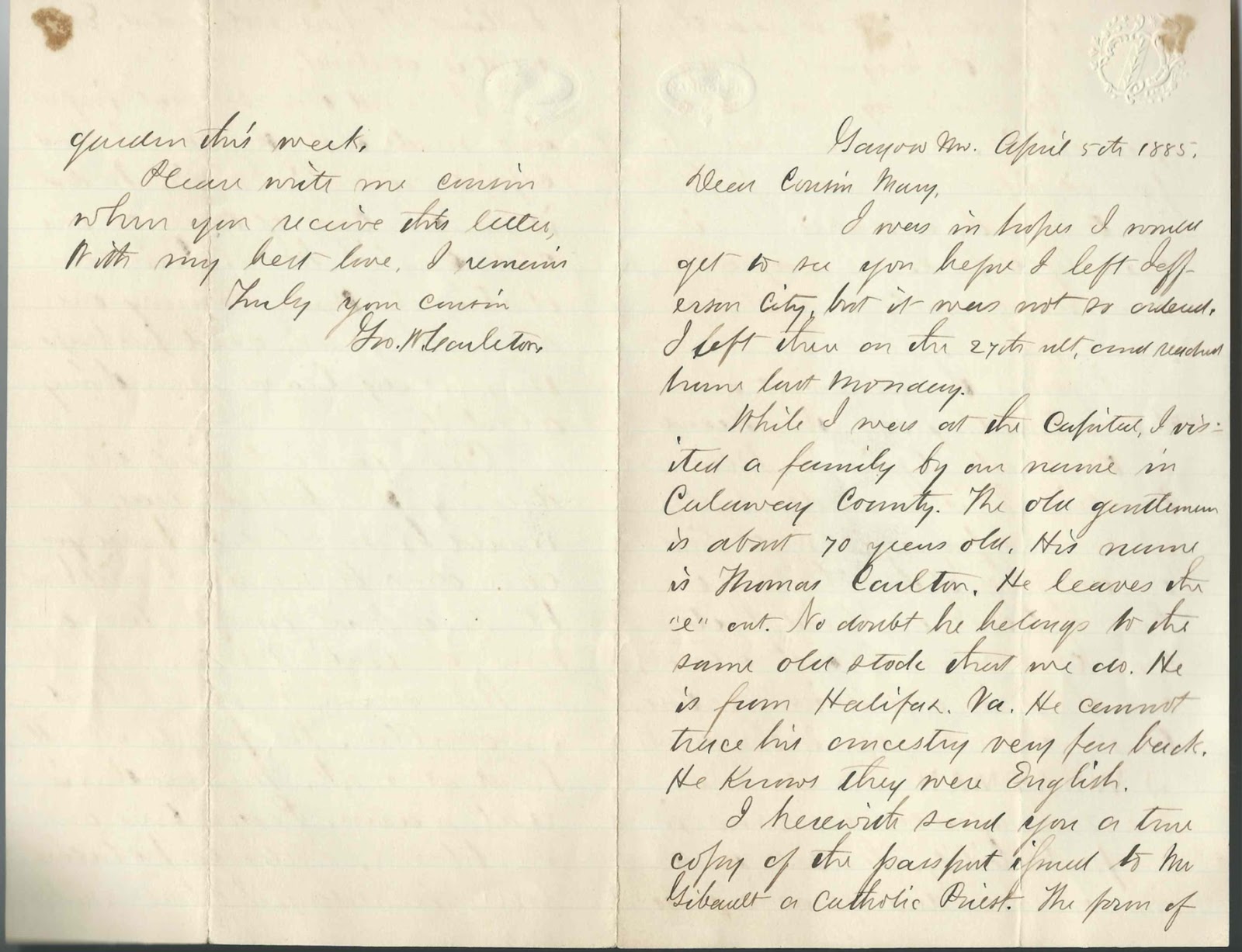 1885 letter from attorney and farmer George W. Carleton of Gayoso, Missouri, to his cousin Mary regarding their shared ancestor Sir Guy Carleton.  Transcript at the end of this post. 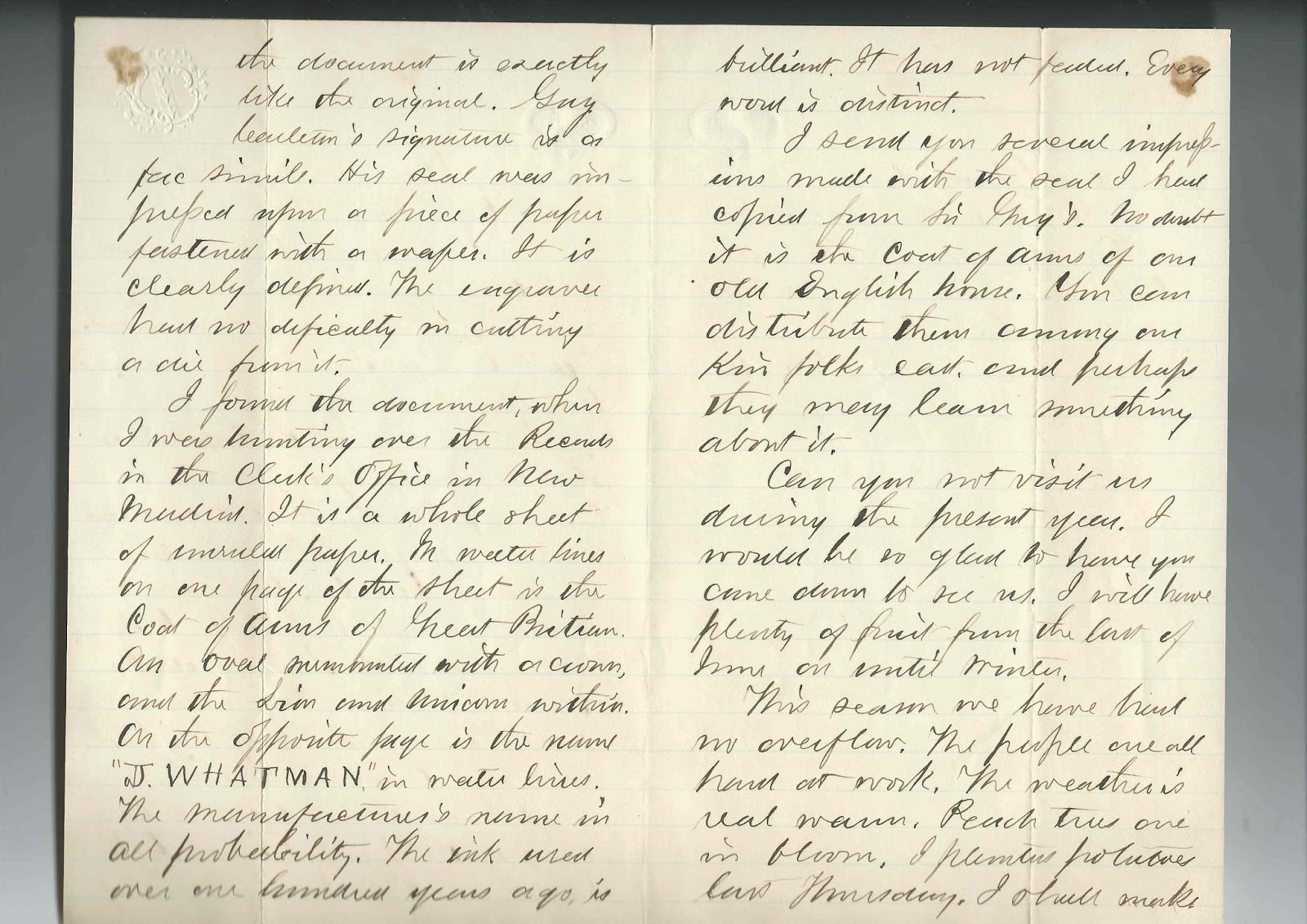 The following information, also hopefully correct, is derived from his obituary and from a short biography in the "History of Southeast Missouri", Volume I, by Robert Sidney Douglass.

Shortly after George's birth, the family moved to St. Clair County, Michigan, where they farmed.  In 1852, George moved to New Madrid, Missouri, where he taught school and studied civil engineering.  He married Somerville/Summerville Tomlin in 1853, and they then moved to Gayoso, Missouri, where George spent the rest of his life, at various times farming, working as a lawyer, publishing the "Gayoso Democrat" and serving as mayor, as county clerk and in the state legislature.

I believe George and his wife had two sons, one of whom had apparently died by the time of the 1870 Census.  The other son, William Sam Carleton, lived to adulthood and raised a family but predeceased his father in 1889, according to George's obituary.  George died in 1893 at Gayoso.


Gayoso, Mo. April 5, 1885
Dear Cousin Mary,
I was in hopes I would get to see you before I left Jefferson City, but it was not so ordered.  I left there on the 27th, ult. and reached home last Monday.

While I was at the Capitol, I visited a family by our name in Calaway County.  The old gentleman is about 70 years old.  His name is Thomas Carlton.  He leaves the “e” out.  No doubt he belongs to the same old stock that we do.  He is from Halifax, Va.  He cannot trace his ancestry very far back.  He knows they were English.

I herewith send you a true copy of the passport issued to Mr. Gibault a Catholic Priest.  The form of the document is exactly like the original.  Gay Carleton’s signature is a facsimile.  His seal was impressed upon a piece of paper fastened with a wafer.  It is clearly defined.  The engraver had no difficulty in cutting a die from it.

I found the document, when I was [hunting ?] over the Records in the Clerk’s Office in New Madrid.  It is a whole sheet of unruled paper.  In water lines on one page of the sheet is the Coat of Arms of Great Britain.  An oval surmounted with a crown, and the Lion and Unicorn within.  On the opposite page is the name “J. WHITMAN” in water lines.  The manufacturer’s name in all probability.  The ink used over one hundred years ago is brilliant.  It has not faded.  Every word is distinct.

I send you several impressions made with the seal I have copied from Sir Guy’s.  No doubt it is the Coat of Arms of our old English home [or house].  You can distribute them among our Kin folks east and perhaps they may learn something about it.

Can you not visit us during the present year.  I would be so glad to have you come down to see us.  I will have plenty of fruit from the last of June on until Winter.

This season we have had no overflow.  The people are all hard at work.  The weather is real warm.  Peach trees are in bloom.  I planted potatoes last Thursday.  I shall make garden this week.

Please write me, cousin, when you receive this letter.  With my best love, I remain
Truly your cousin,

The path of George's life from Stillwater, New York, to St. Clair County, Michigan, to New Madrid, Missouri, and to Gayoso, Missouri: