1883-1886 Autograph Album of Martha Weidner of Buffalo, New York, with many autographs from her schoolmates at Public School #31.  Some pages were inscribed to Martha's nickname "Little Marcie".

No signers indicated "New York", but I checked a few of the inscribers and found people of that name and approximate age living at Buffalo, New York.   I had trouble deciphering many of the names and may have missed the mark on some of them.  If you notice corrections that must be made, please let me know.

The album measures approximately 6-1/4" x 3-3/4" and contains the sentiments of 66 of Martha's relatives, friends and schoolmates.  An alphabetical surname list and an alphabetical list of the signers, together with any personal information they offered, appear at the end of this post. 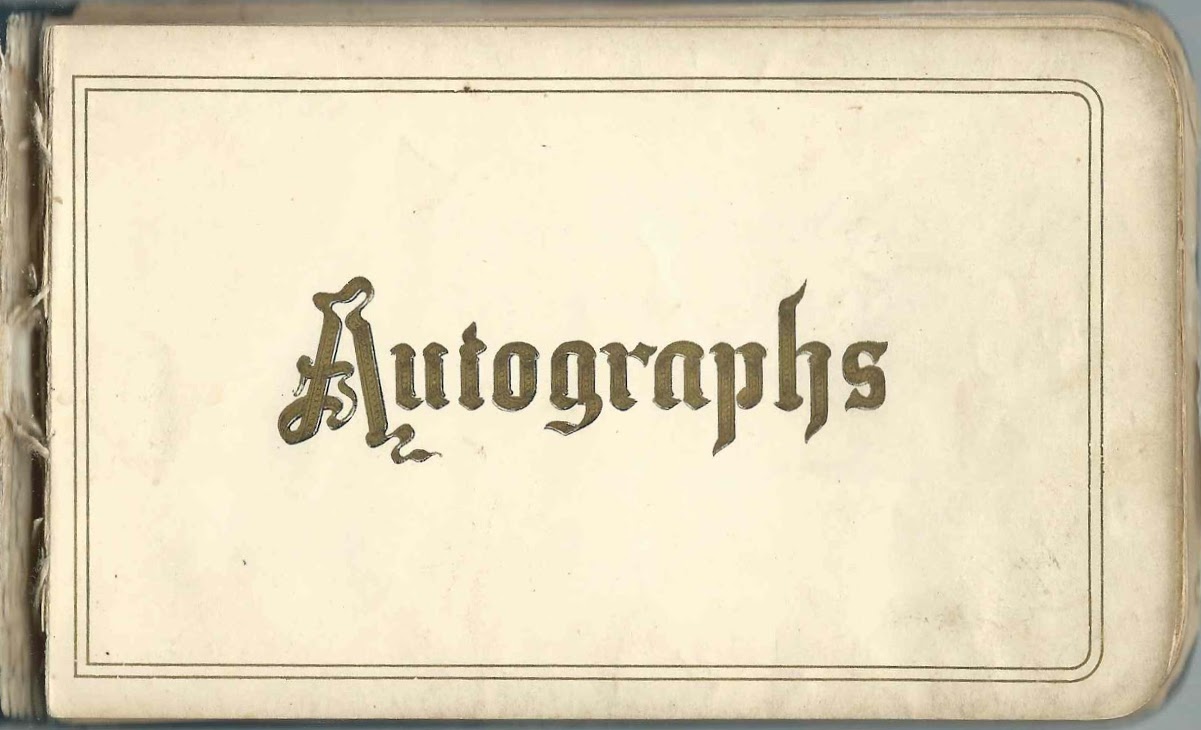 I believe Martha was Martha Emma Weidner who was born March 22, 1872, possibly at Buffalo, New York, the daughter of German immigrants Carl George Weidner and wife Clara.  This Martha had a younger brother, Paul, and there happens to be a page inscribed by Martha's brother Paul. 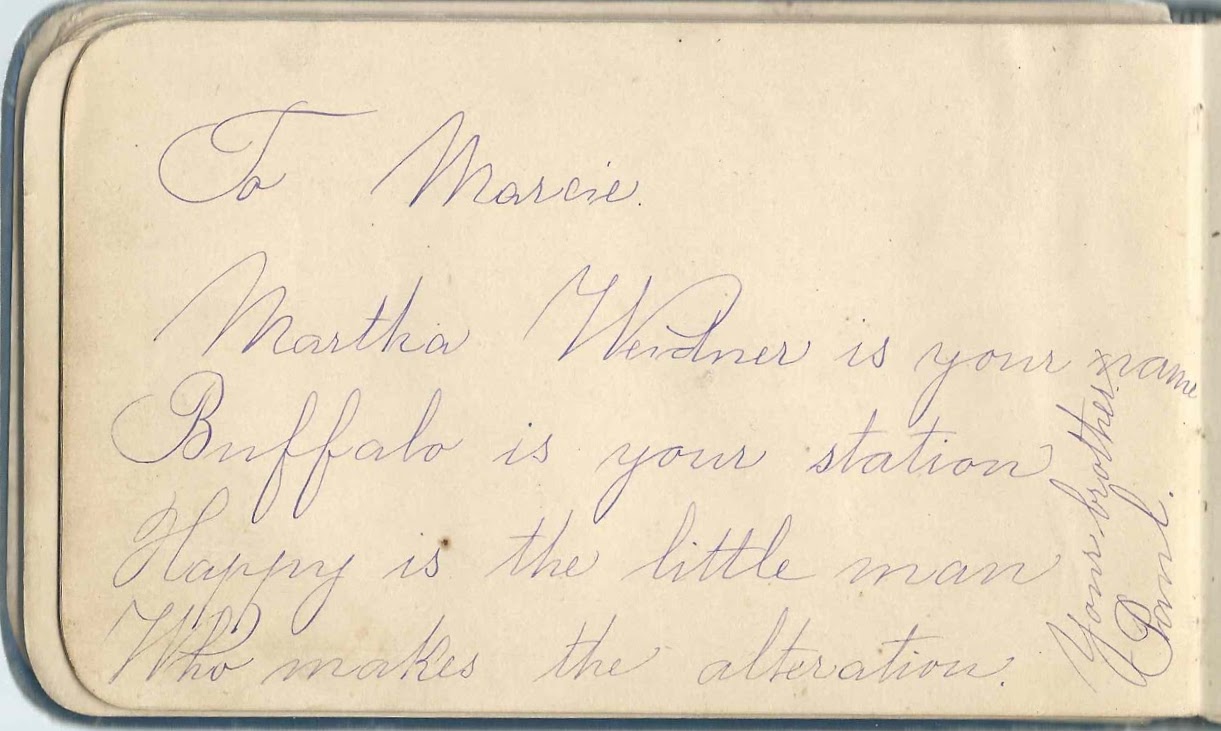 About 1894, Martha married George Robert Gibson Reister; they lived at Buffalo, New York and had at least one child, a son, George Carl Gustave Reister, who appeared to be named at least partially for his maternal grandfather.  Martha died in 1964; her husband had predeceased her in 1942.  They and their son are buried at the Ridge Lawn Cemetery at Cheektowaga, New York.

If you have corrections and/or additions to the information above, or if you feel that the album owner was a different Martha Weidner, please leave a comment or contact me directly.  Please also comment if you have information on any of the signers listed below.  Thanks!

Other signers who indicated a family relationship [and there may be more who didn't]:

The page below, written in a foreign language, was signed by a person with the surname Linke, possibly Eliza Linke.

I could use some help with the name of the person who inscribed the page below. 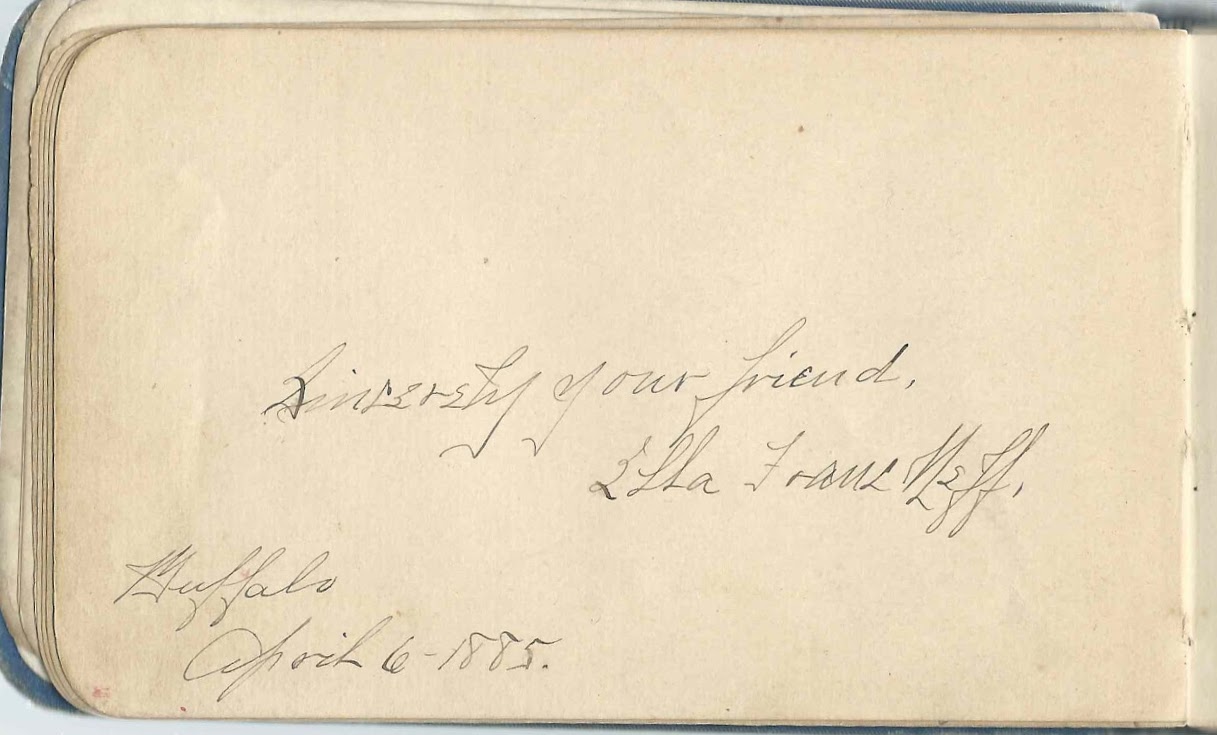 If you can translate the page below, or at least determine the name of the inscriber, please leave a comment.  [I've now been told the name is Katharina Broede, which makes sense, as there are other people named Broede who signed pages in the album.

Posted by Pam Beveridge at 3:12 PM