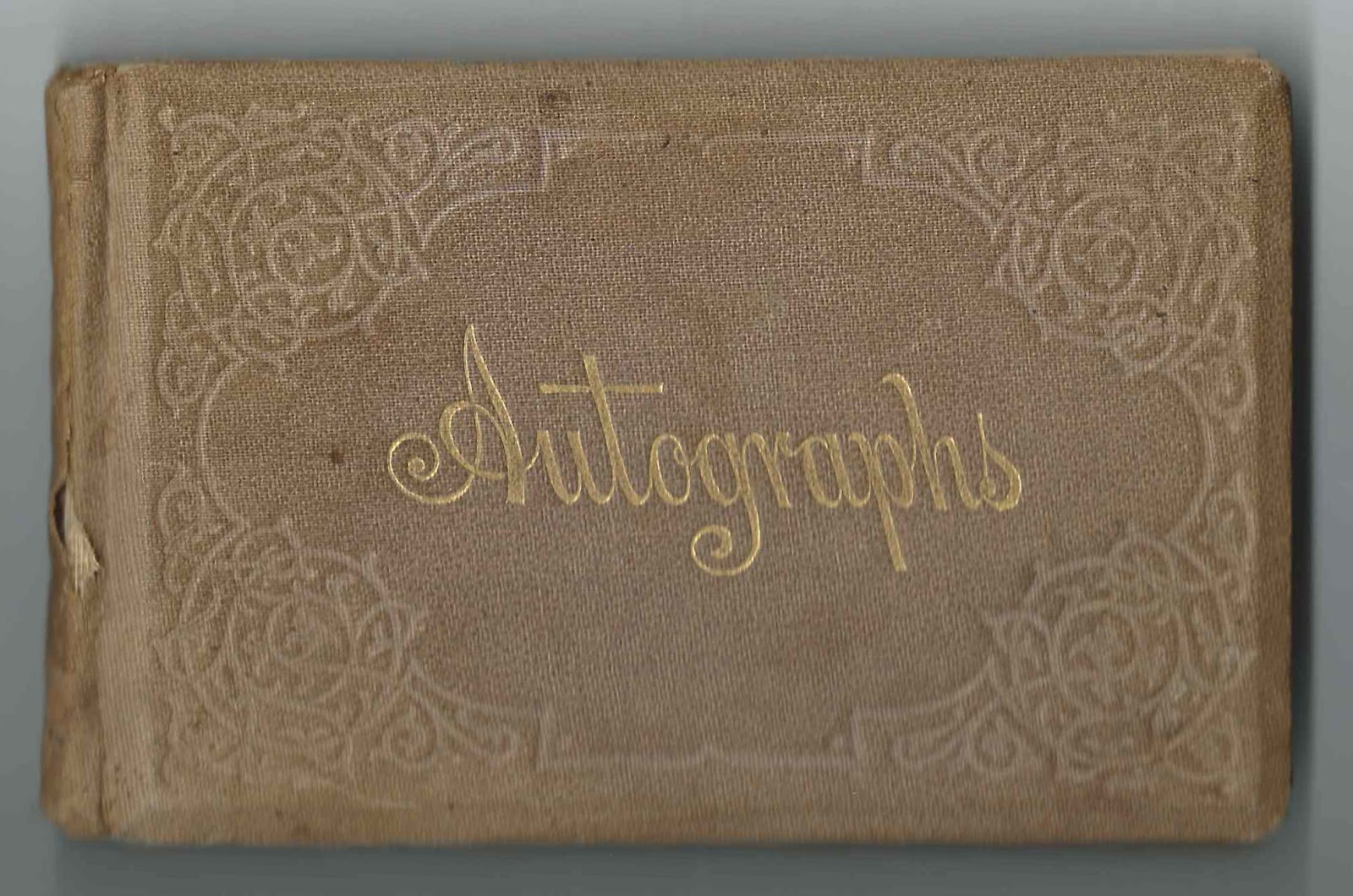 1884-1887 autograph album that belonged to Martin Luther Fenstermacher of Park, Michigan, and, later, Brady, Michigan, and Vicksburg, Michigan.   Several of the signers were students at the Normal School at Ypsilanti, Michigan, now operating as East Michigan University. 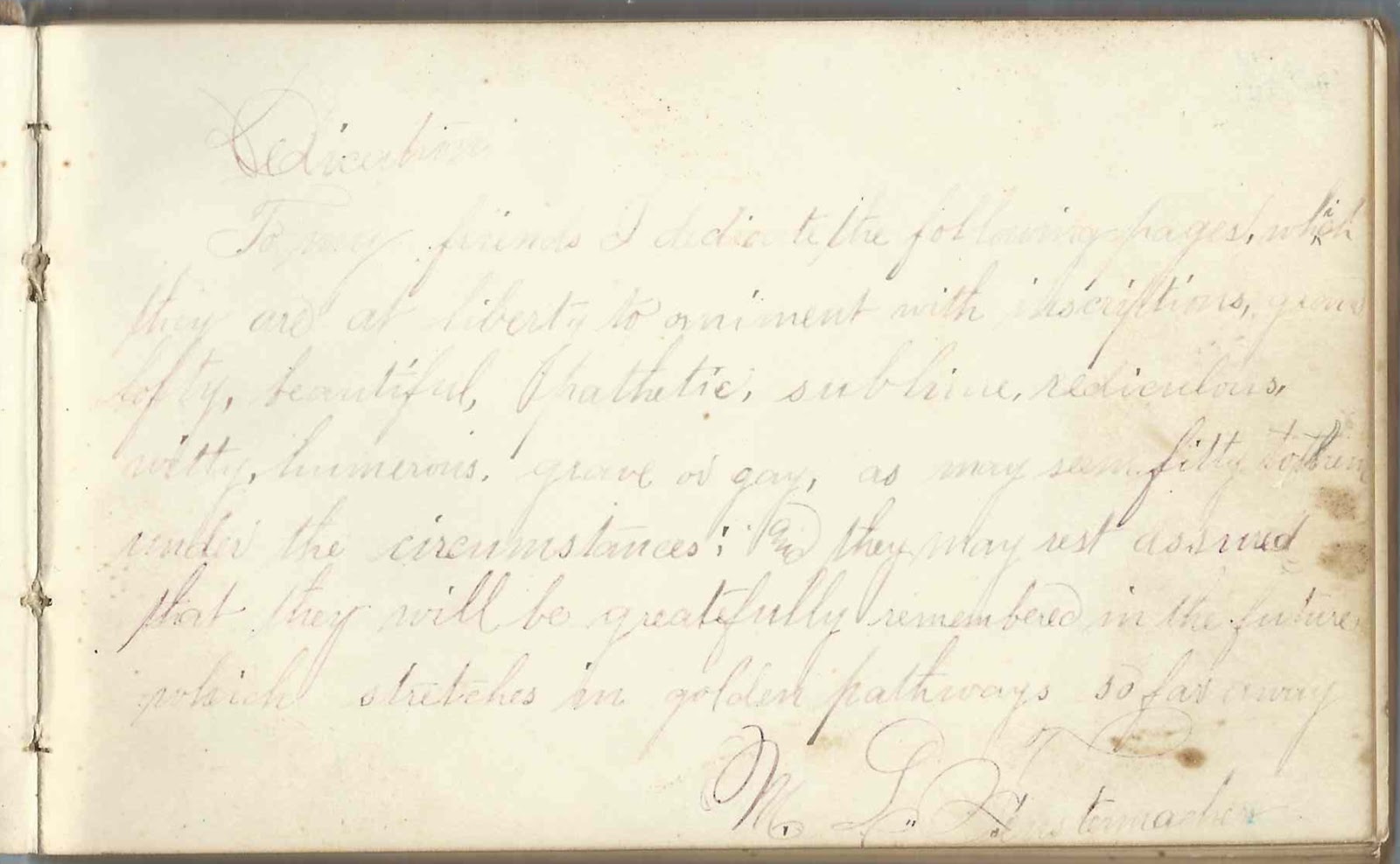 The album measures approximately 6" x 3-3/4" and contains the sentiments of 48 of Martin's relatives, friends, schoolmates and students.  An alphabetical surname list and an alphabetical list of the signers, together with any personal information they offered, appear at the end of this post.  Martin added notes to a few of the pages. 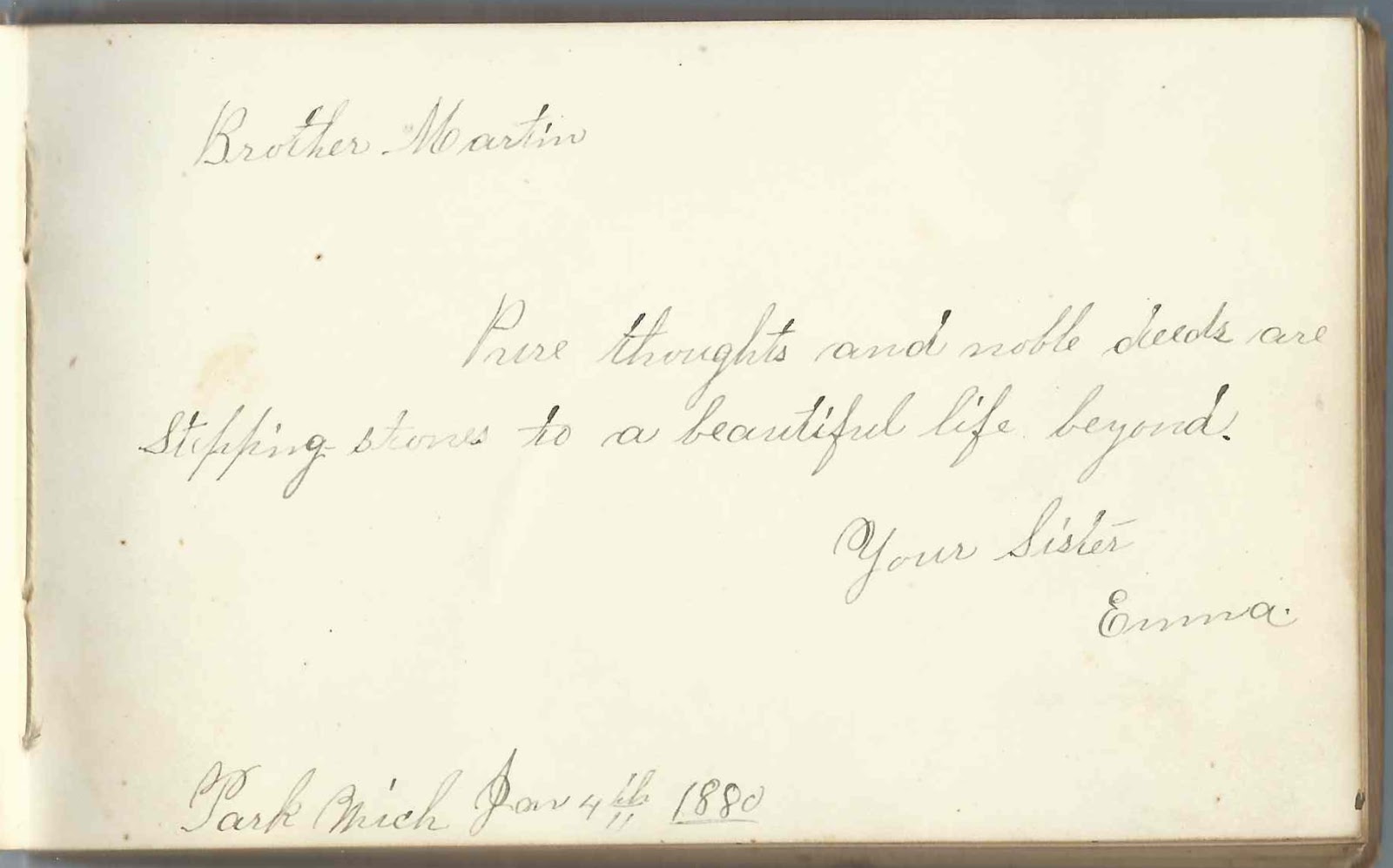 Another inscriber called herself Martin's sister, but she may have been a sister-in-law.  She was Mary E. Hall, who inscribed a page at Pavilion, Michigan, on October 12, 1881. 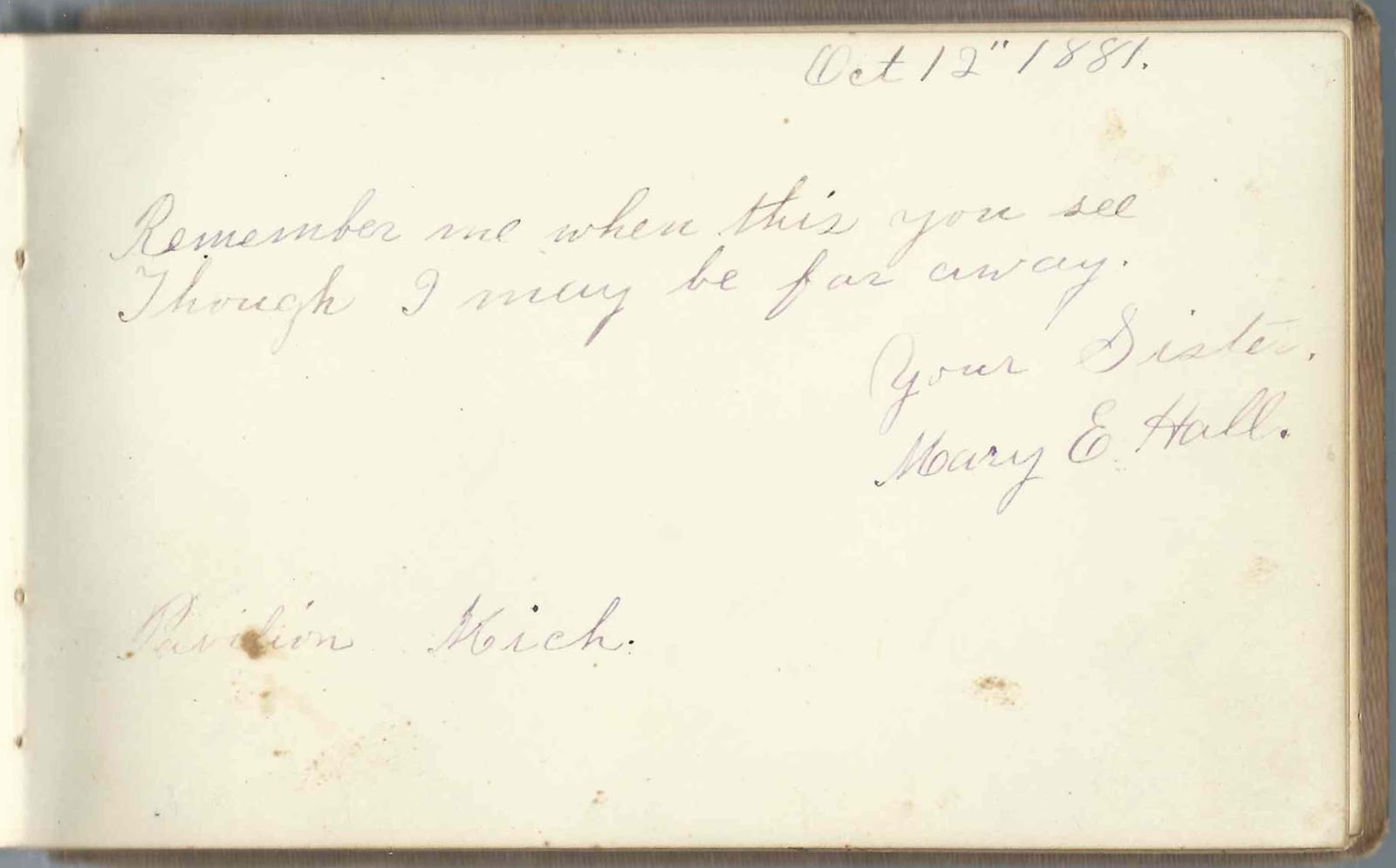 Stell, who inscribed a page on February 14, 1879, called Martin her uncle. 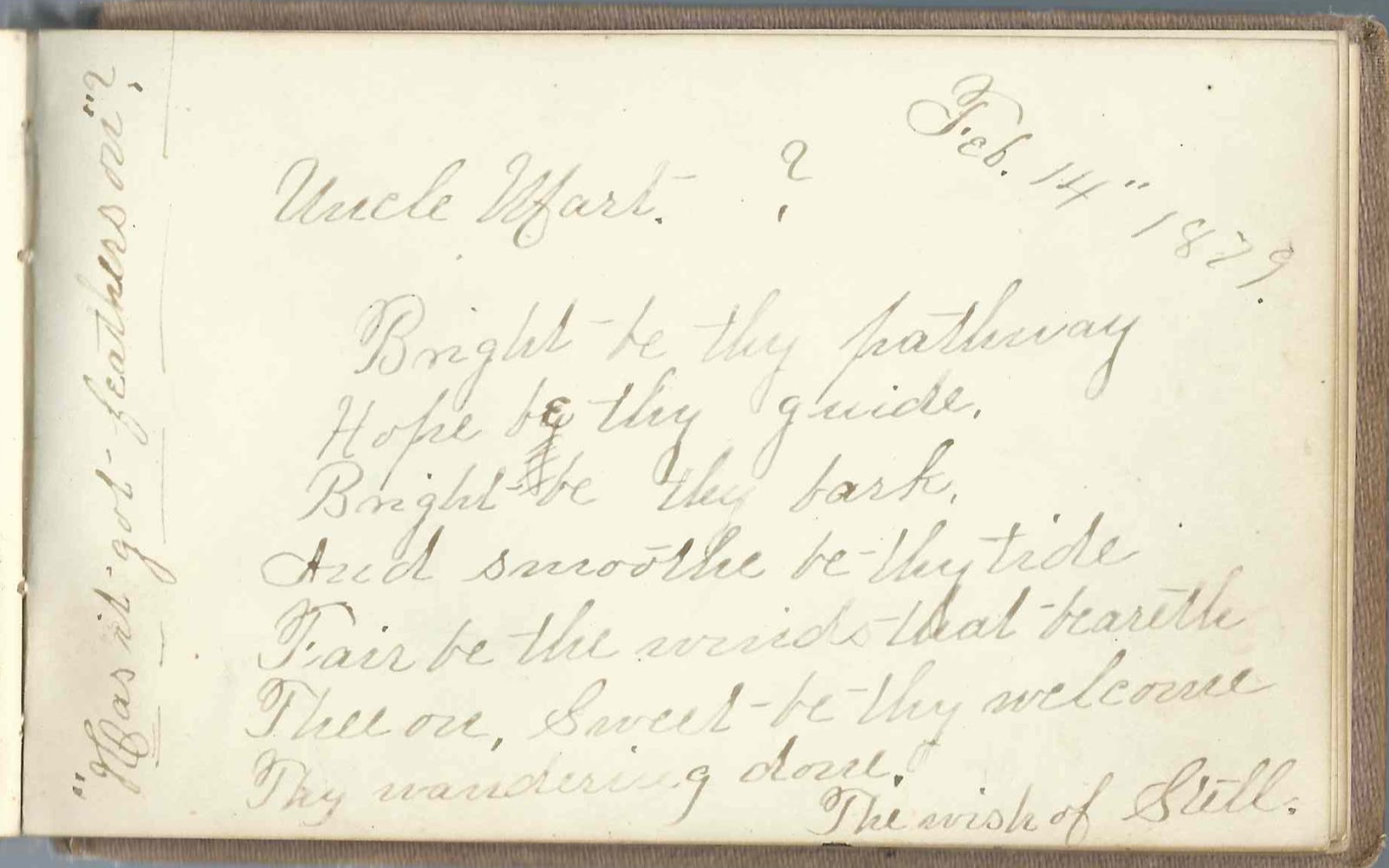 As noted above, it seems that Martin attended the Normal School at Ypsilanti, Michigan about 1874, as several inscribers mentioned that institution.  I didn't see his name in an 1874 catalog, but he may have graduated another year.  He was teaching at Brady, Michigan, by 1876, as several of his scholars inscribed pages. 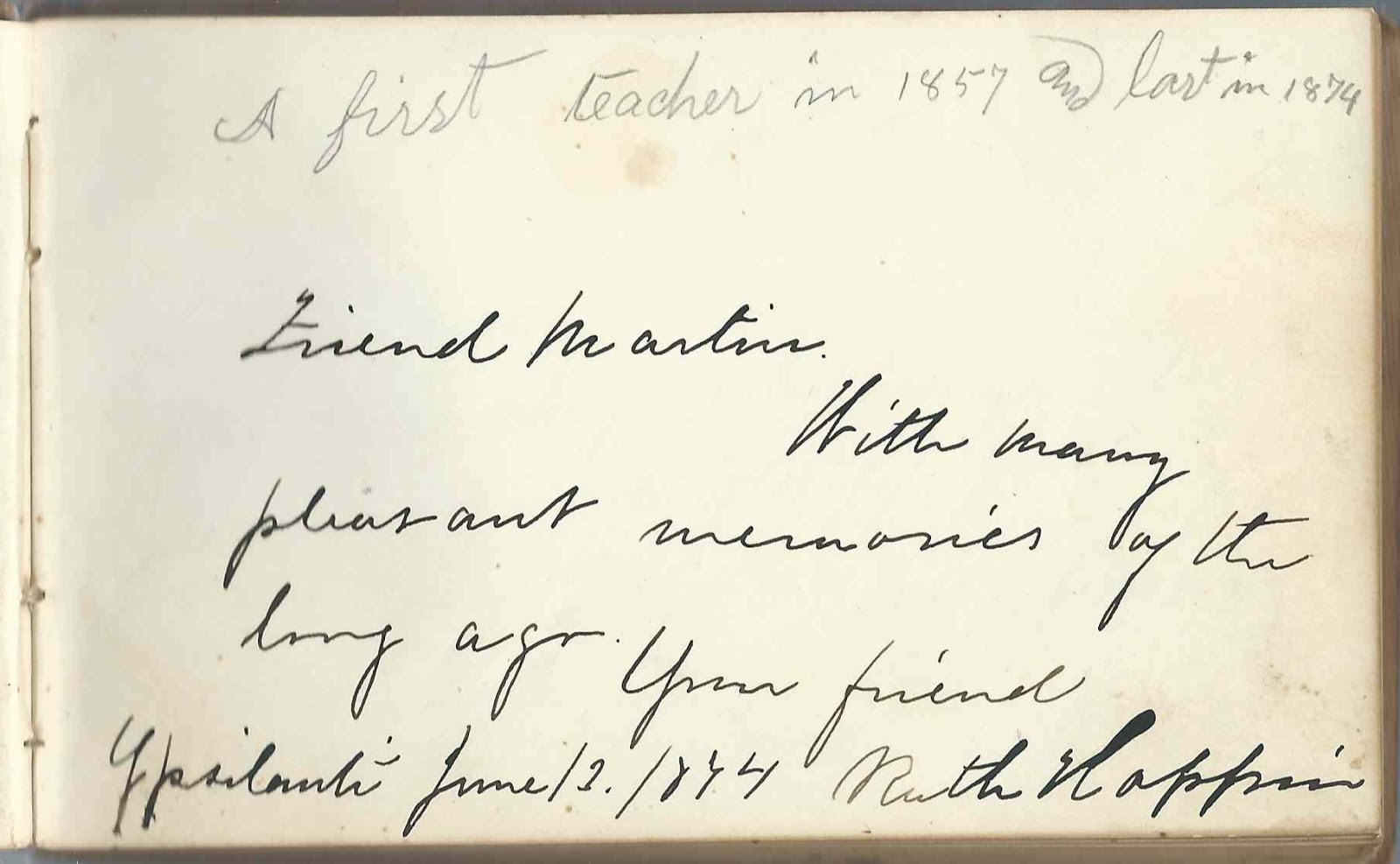 On January 1, 1880, Martin Luther Fenstermacher married Zelma King, or Zelena King, daughter of Jesse and Nancy King.  She inscribed a page in Martin's album on October 26, 1878. 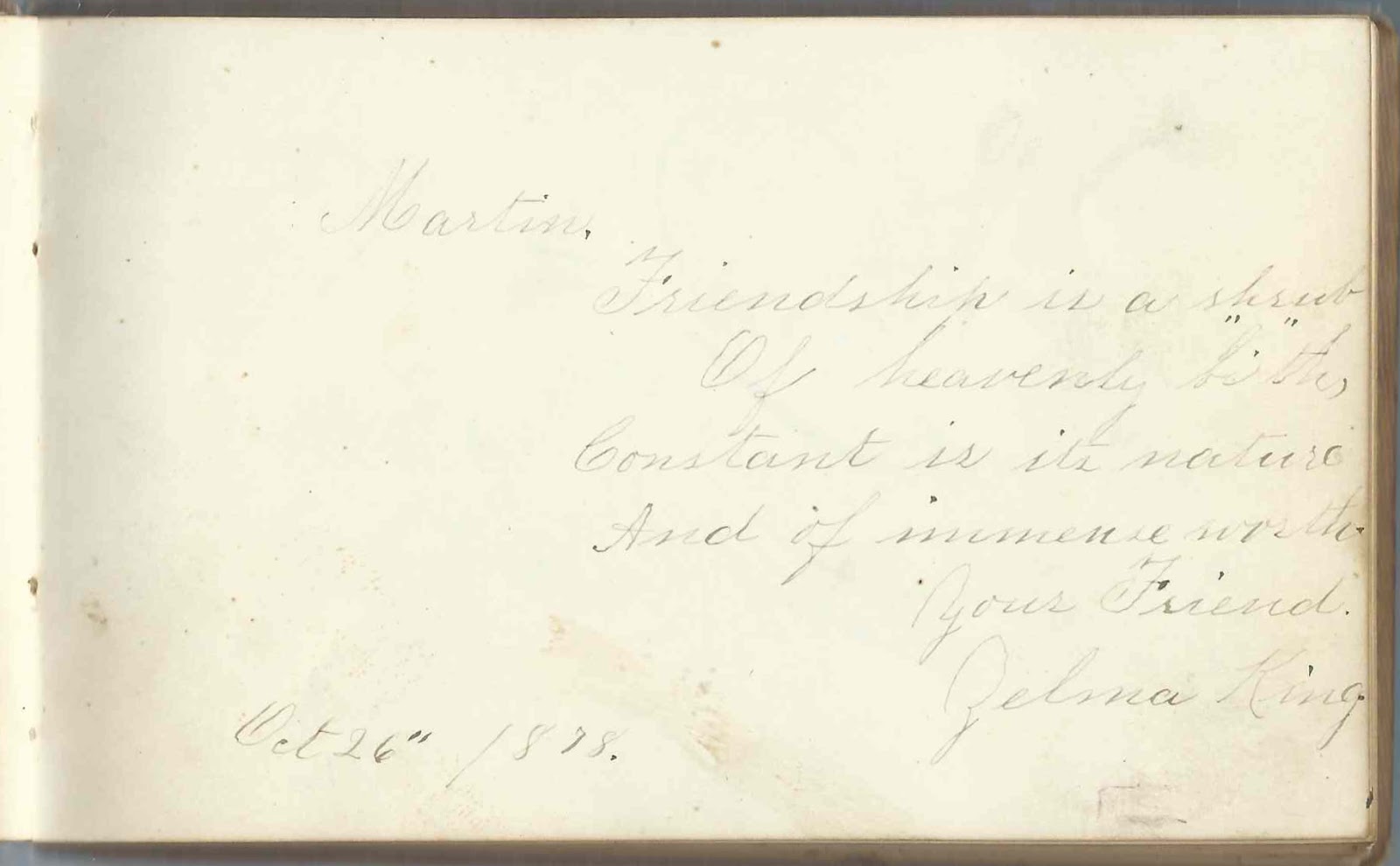 I believe Martin and Zelma had two daughters, Jessie E. Fenstermacher and Gladys Laura Fenstermacher.  Sadly, Zelma died in 1895.  In 1897, Martin married Francis Lorinda Kennedy.  They had a daughter Gertrude L. Fenstermacher.  After teaching, Martin became a farmer.  He died in 1937.

Other relatives who mentioned a family connection:
If you have corrections and/or corrections to the information above, or information on any of the signers listed below, please leave a comment or contact me directly.

Kalamazoo County, Michigan, which contains the towns of Park, Brady, Schoolcraft and Vicksburg, where Martin lived.