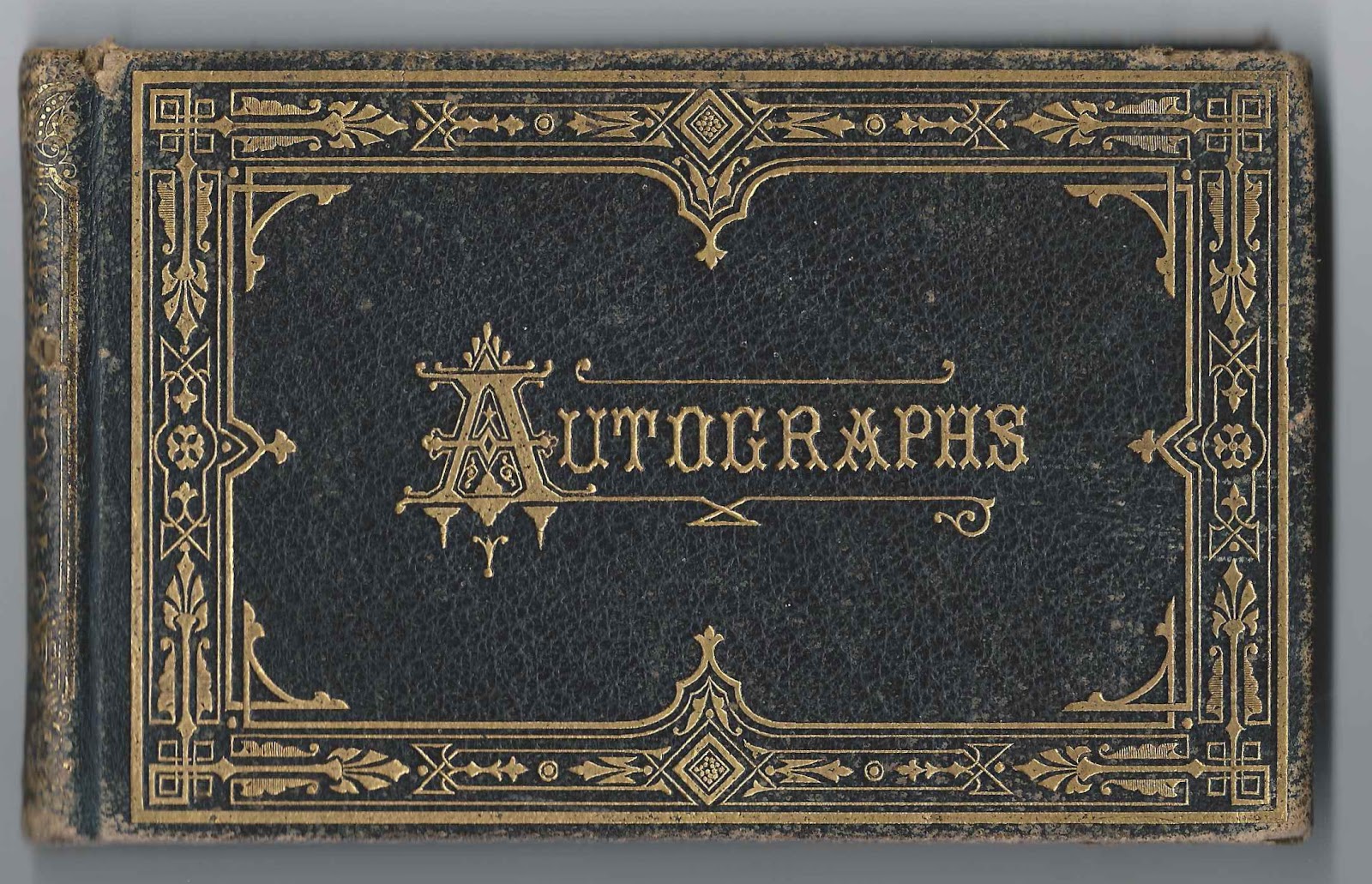 1870s autograph album that belonged to Richard A. Rice, "Dick", of Beacon Falls, Connecticut.  He also spent time at Passaic, New Jersey in the household of his sister Mary Ann (Rice) Gruber and her husband John, and took his autograph album with him. 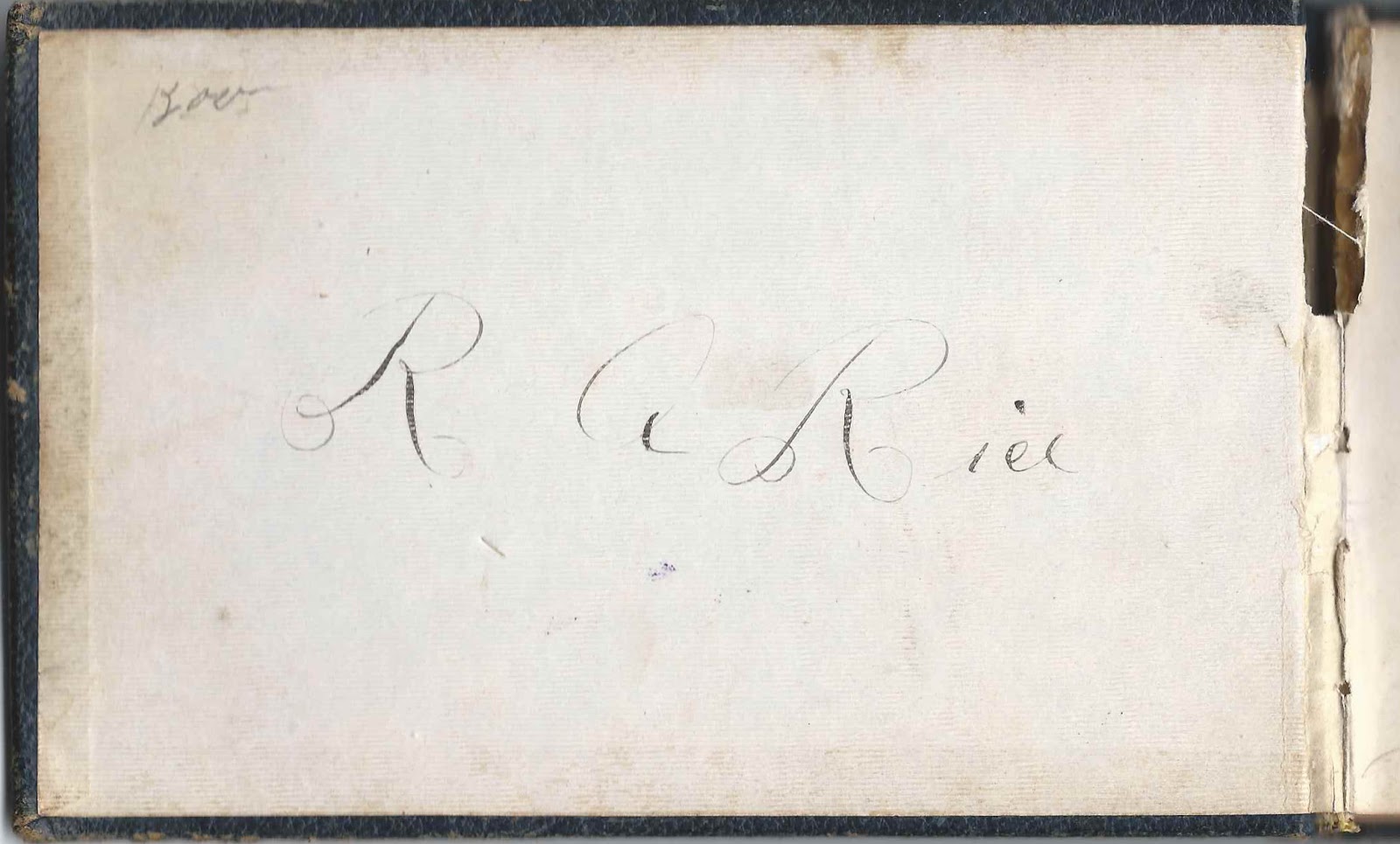 The album is approximately 6-3/4" x 4" and contains the sentiments of 26, or possibly 27, people.  An alphabetical list of the signers appears at the end of this post.

During the era when these autographs were collected, Dick was living both at Beacon Falls and at the home of his sister Mary Ann (Rice) Gruber and family at Passaic, New Jersey.  One Passaic signer implied that Dick was going through a "trying occasion".  I can't quite decipher that signer's name but it appears to be something like W. M. Marks or W. M. Manks, with possibly a preceding initial as well.  The page was signed on May 21, 1879. 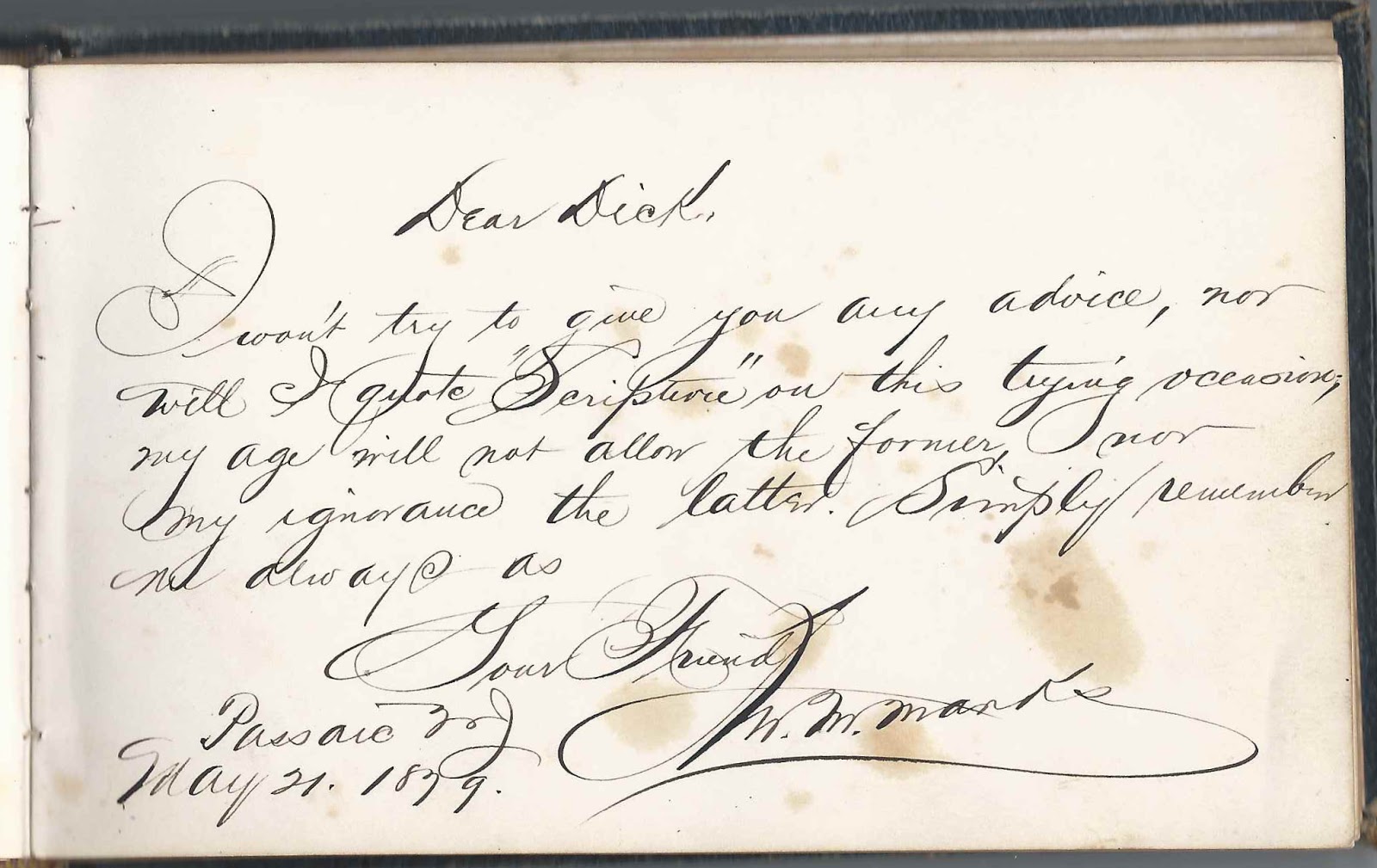 As noted, Dick's sister married John Gruber.  There is a fantastic page designed by Jacob Gruber of Hartford, Connecticut in August 1875, possibly John's relative.  Jacob must have been an artist or an architect or a perfectionist. 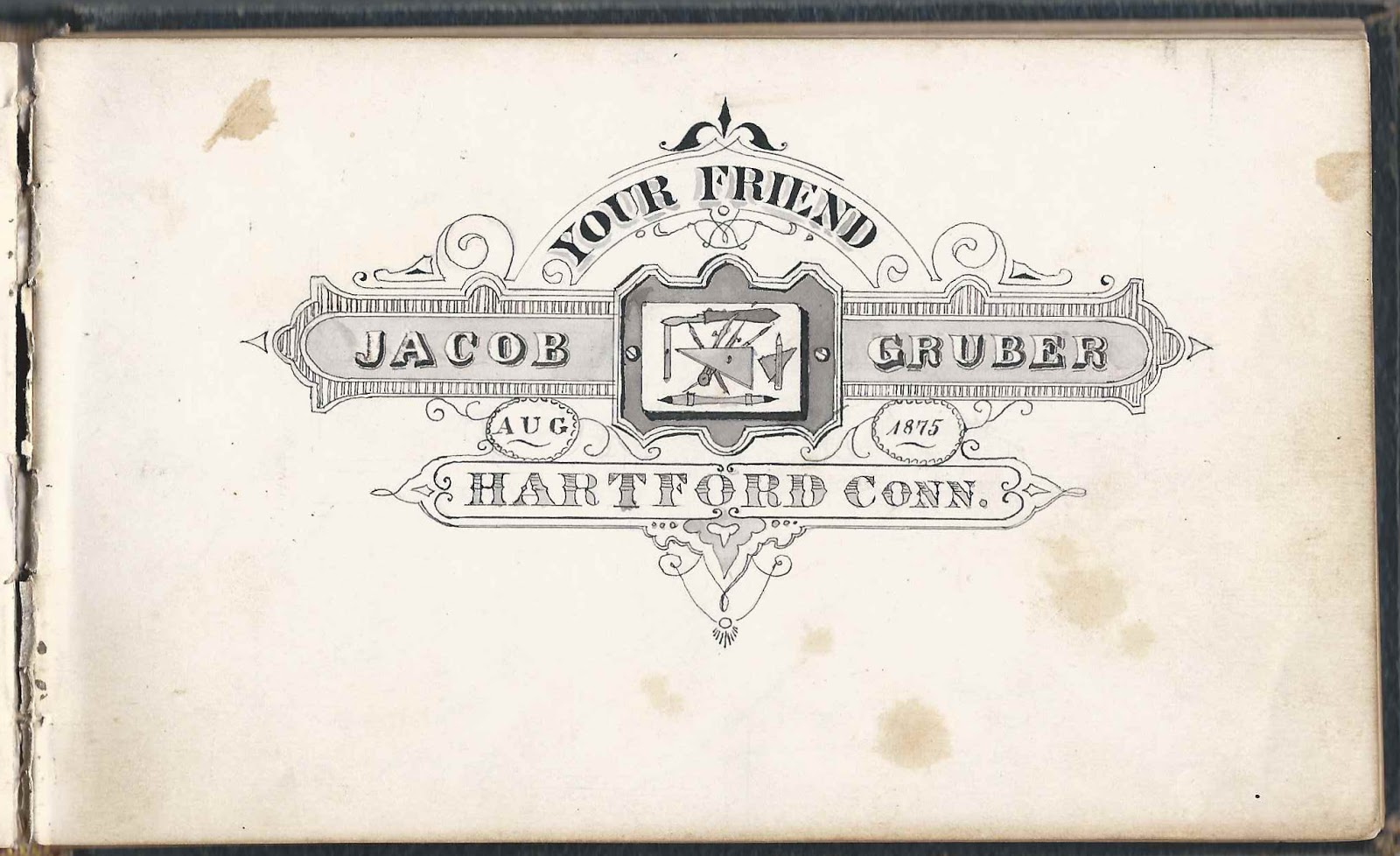 I'm not sure if Richard A. Rice, a weaver, ever married.  He died in 1929 and is buried at Pinesbride Cemetery at Beacon Falls, Connecticut.  If you have corrections and/or additions to the information above, or information on any of the signers listed below, please leave a comment or contact me directly.  Thanks!

Three people named Hart of Beacon Falls, Connecticut, signed pages in the album in 1875, two of them Robert and James, on the same day, November 14.  Below, the page signed by Julius Hart on October 20, 1875. 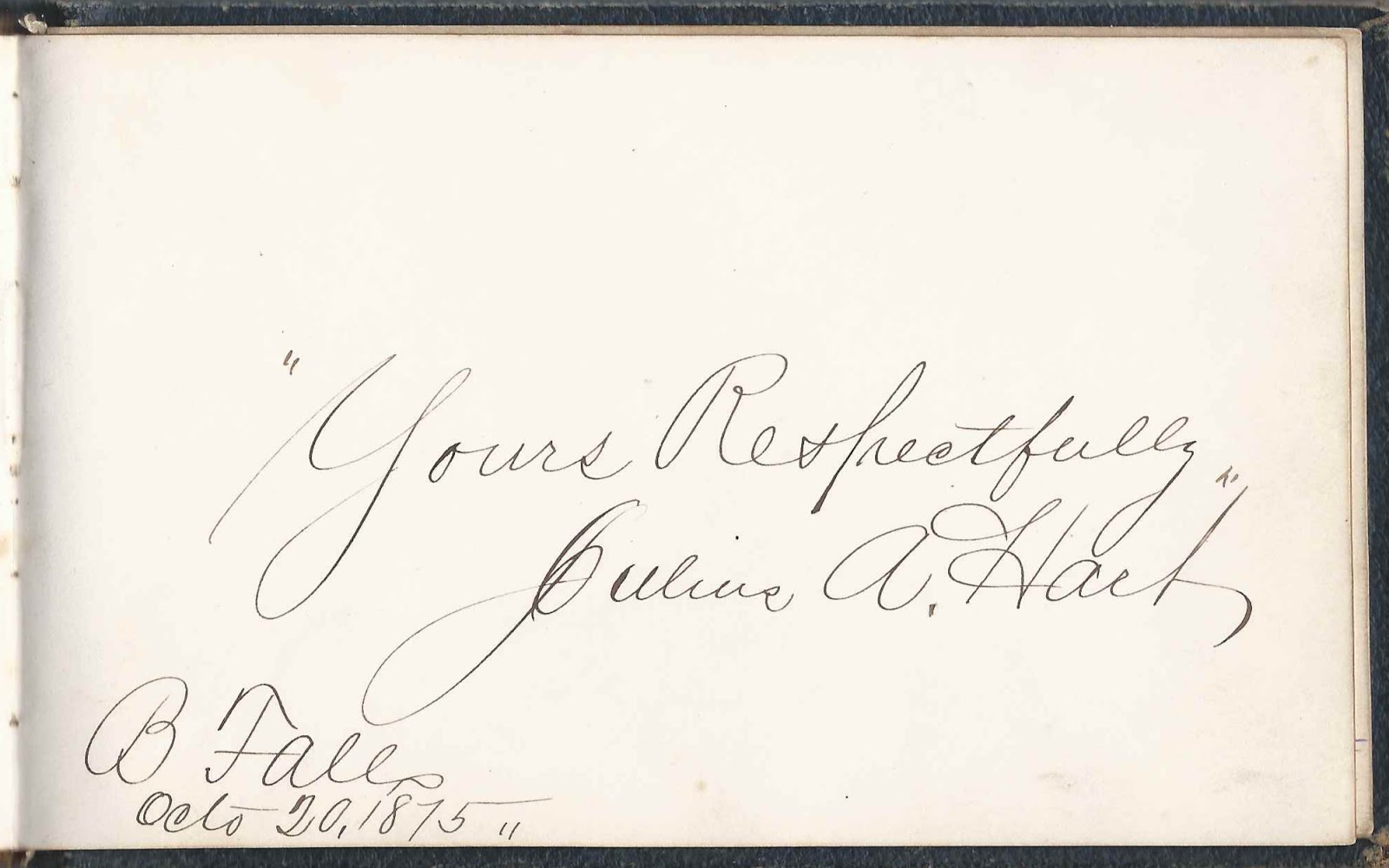 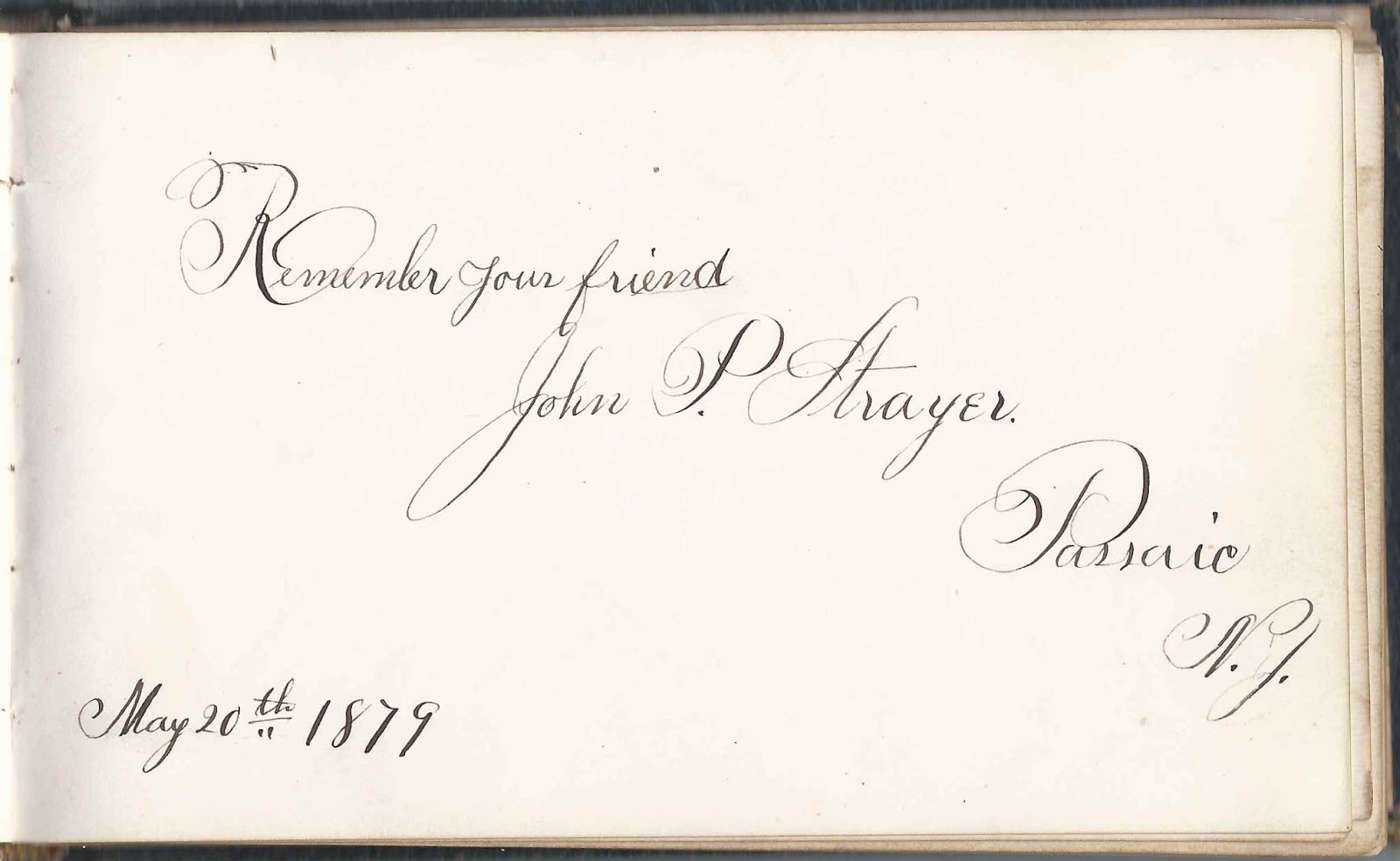 James Bryce signed a page at Passaic, New Jersey, on October 1, 1879 and sketched a bird. 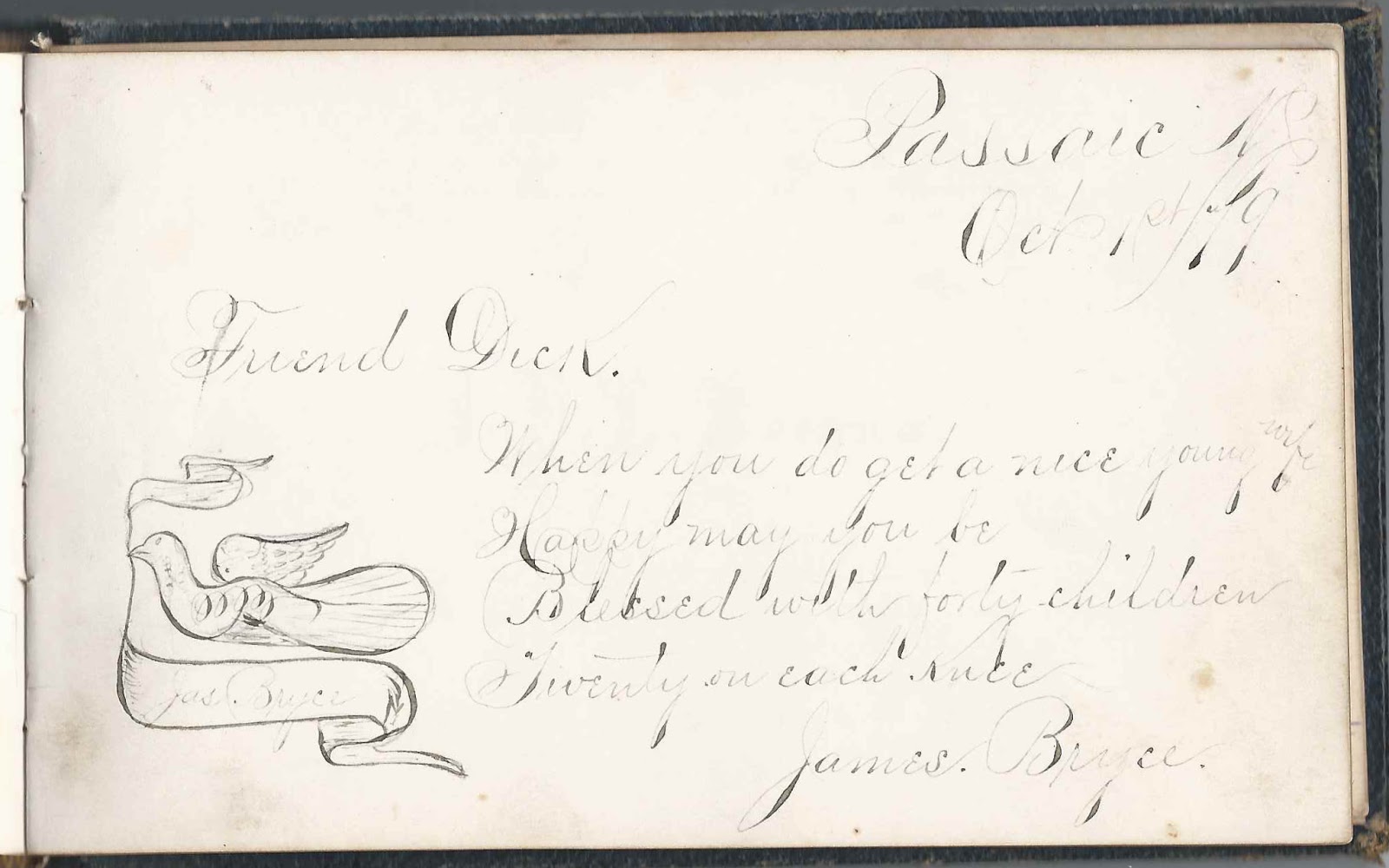 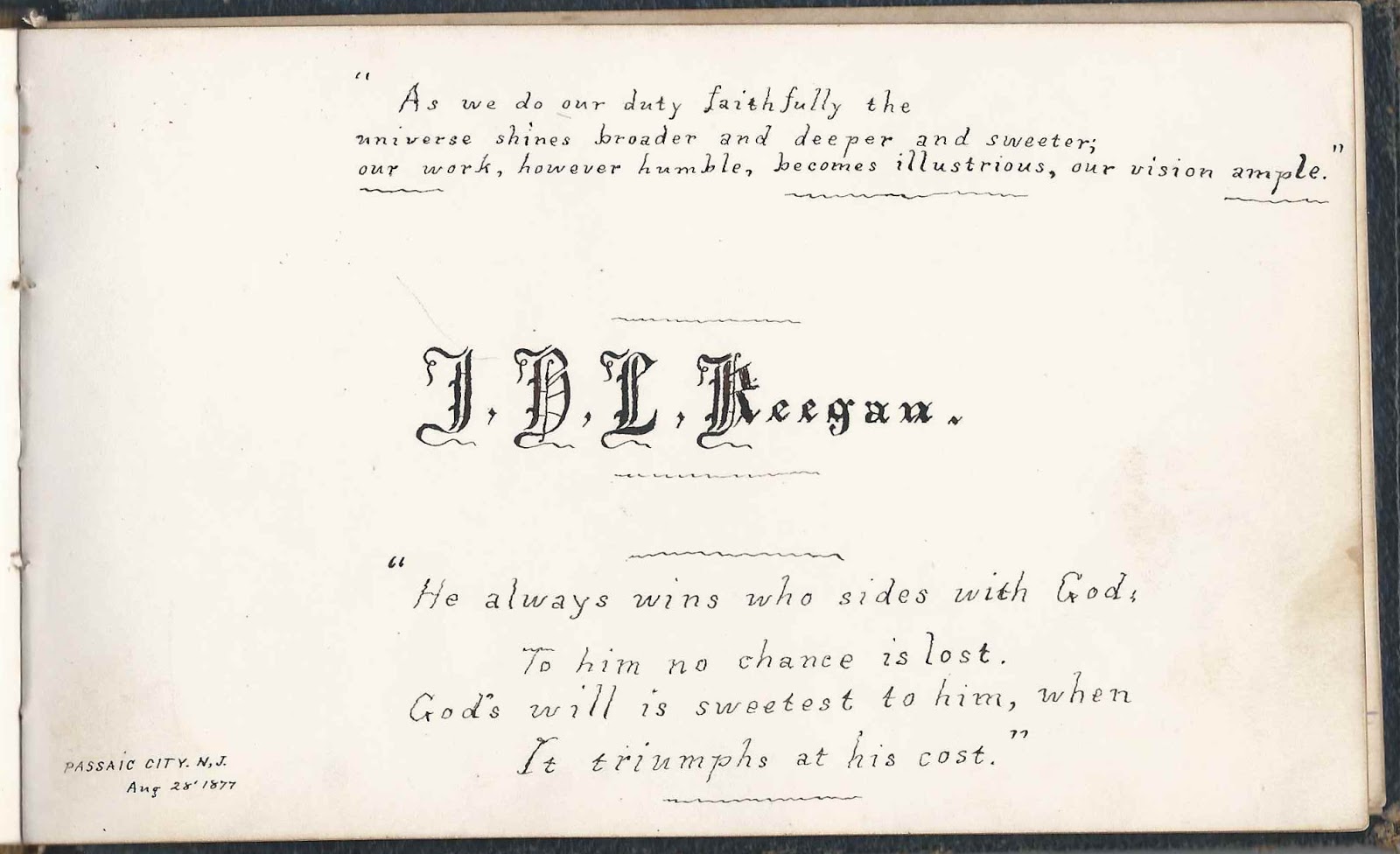 Ellen E. Twichell signed a page.  In other handwriting on the page, written on August 11, 1878, is what appears to be another name.  If you can decipher it, please let me know. 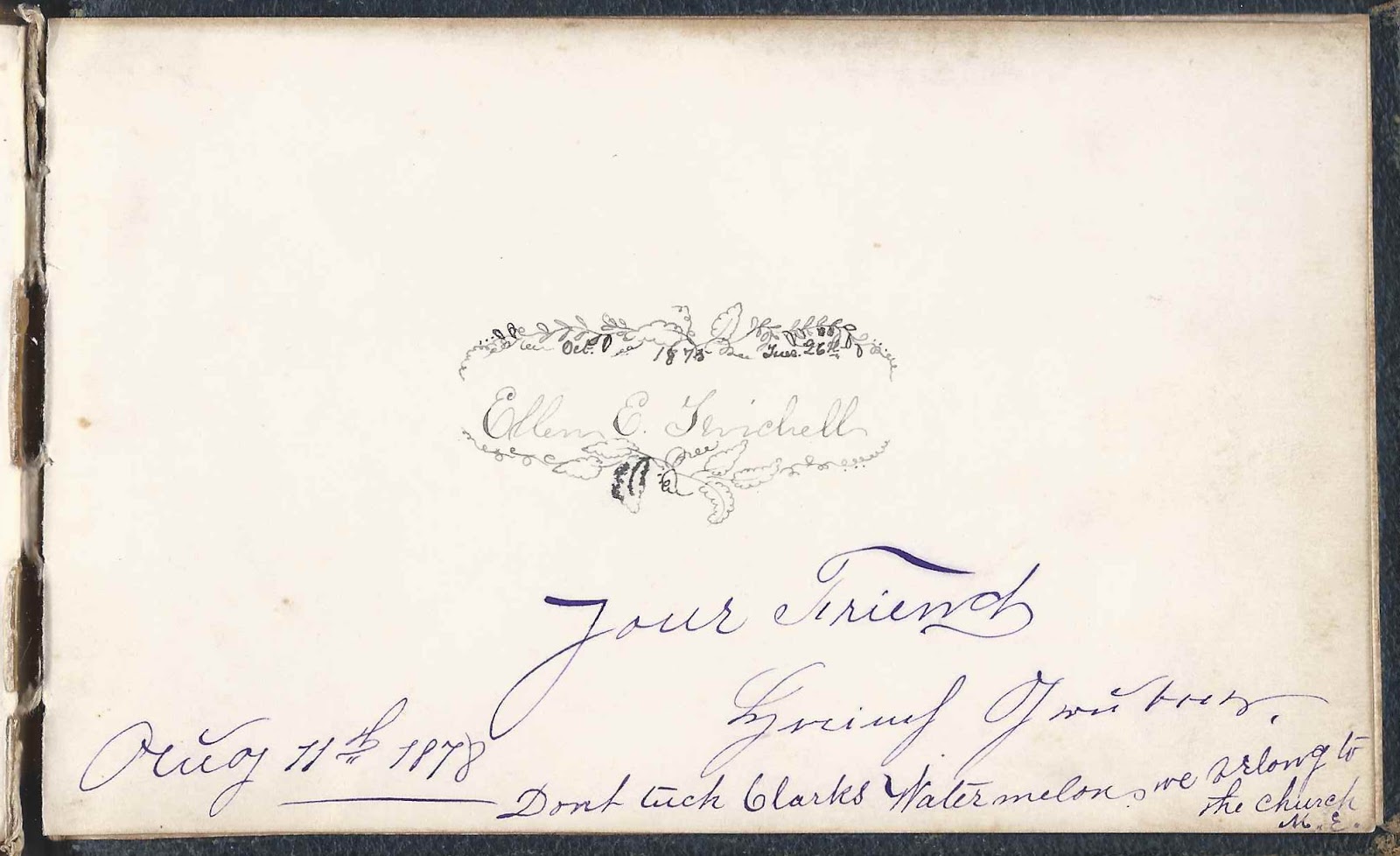 The initials on the page below are so faint and so ornate, I can't make them out, but the surname is Lloyd of Beacon Falls, Connecticut, and the page was signed on December 24, 1876. 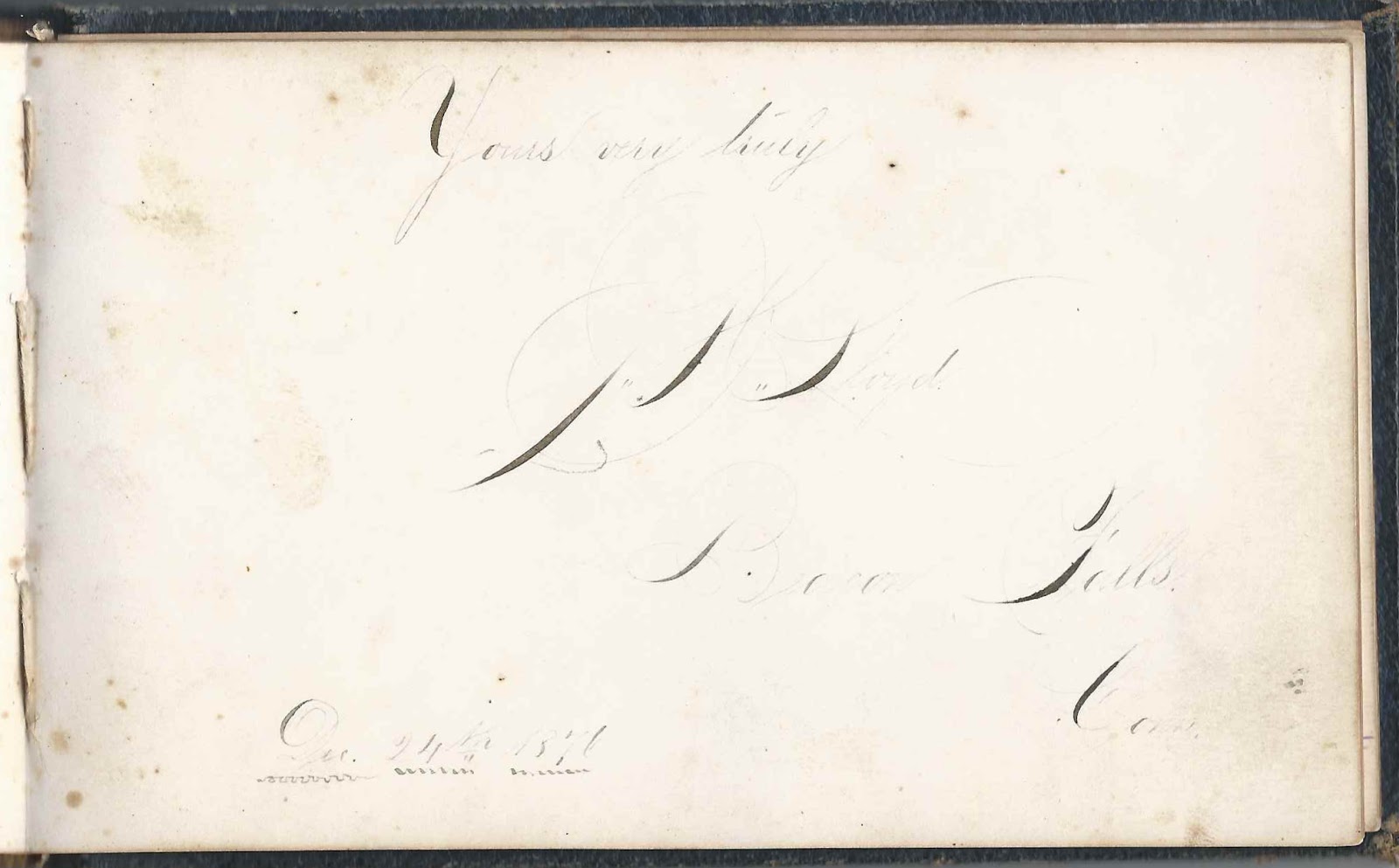 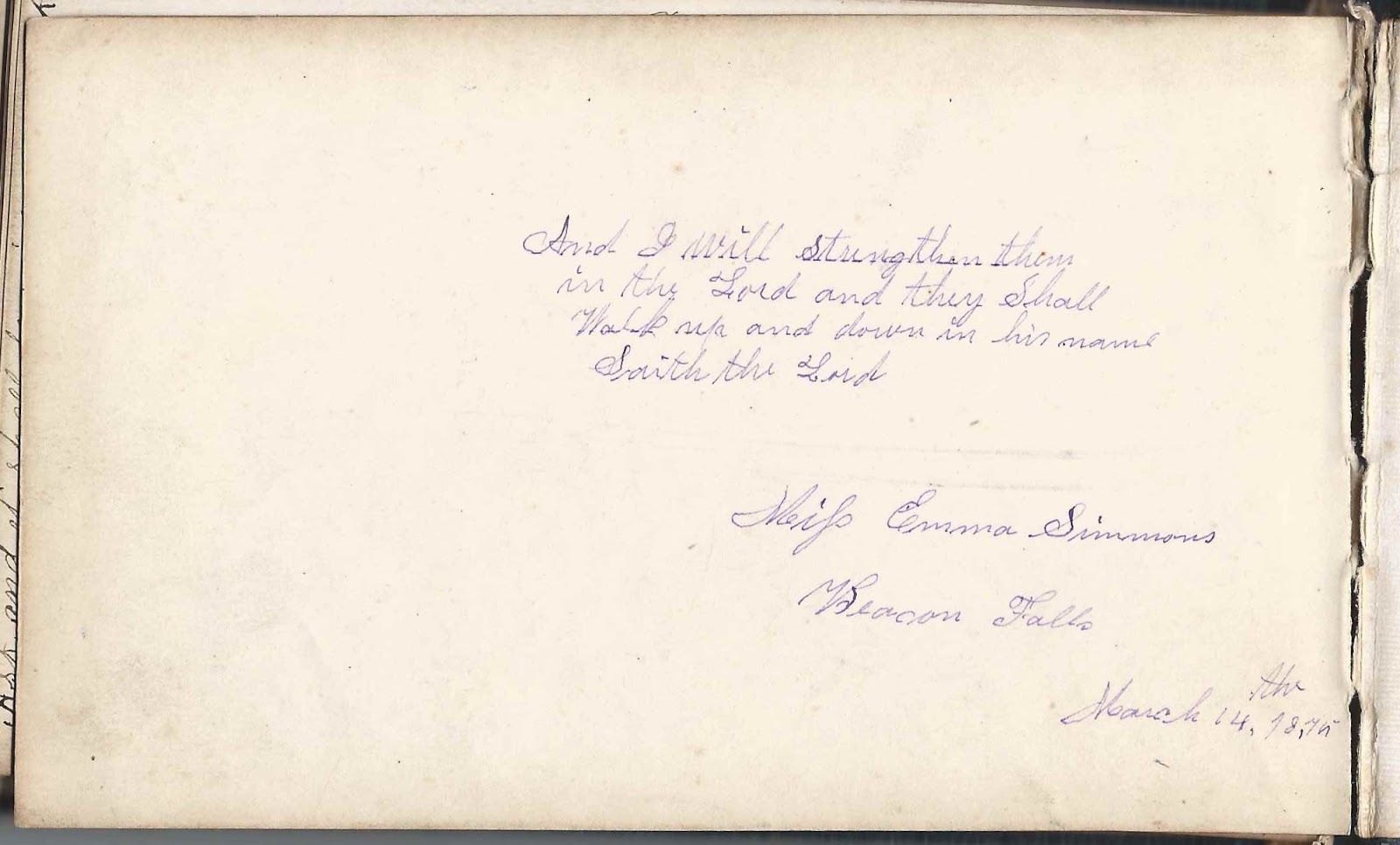 Signers in the album:  [Note: Given names within a specific surname may not be in alphabetical order.]

Posted by Pam Beveridge at 2:55 PM