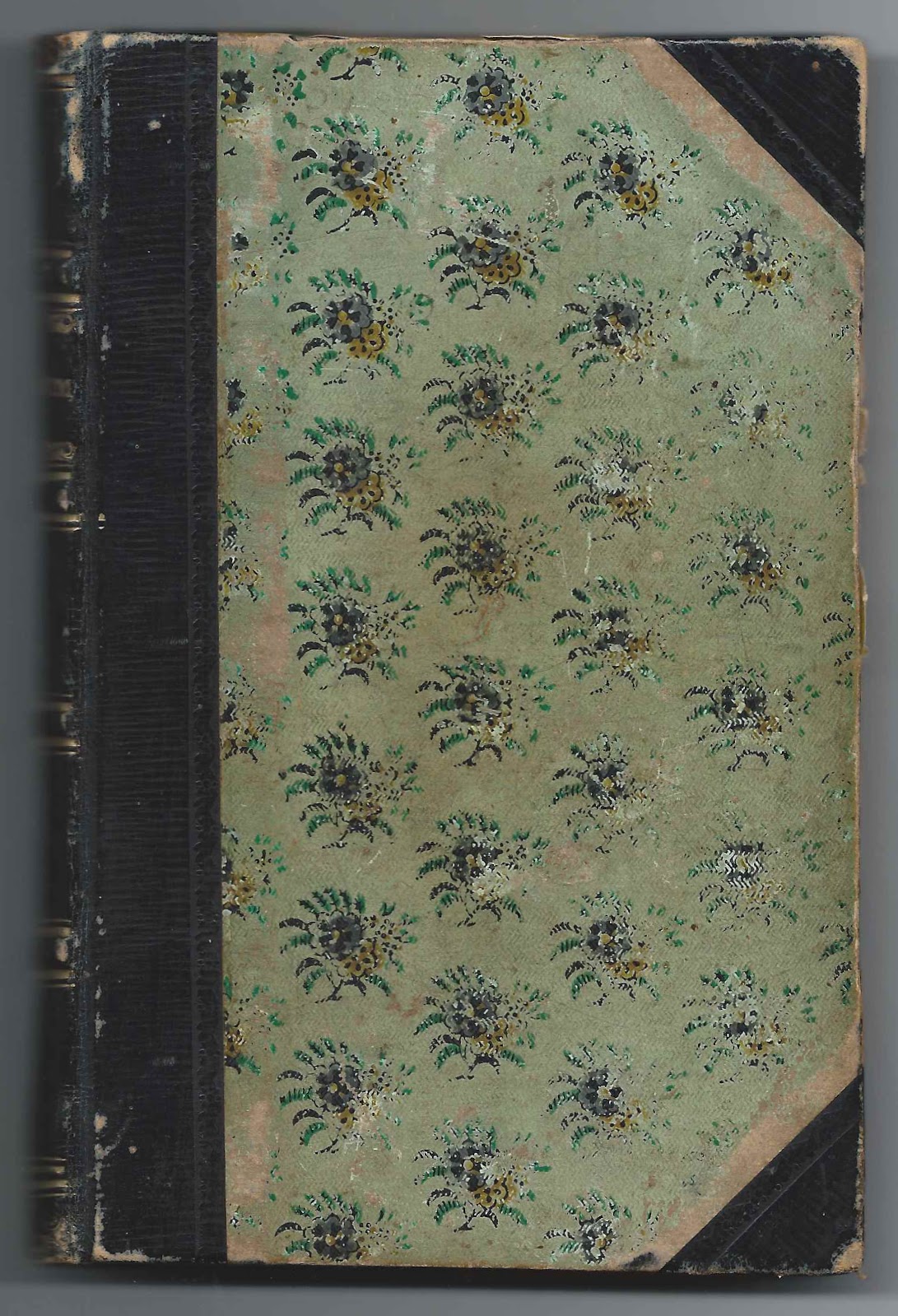 1840s/1850s autograph album of Cordelia (Shaw) Lyon of Chatham, Ohio, compiled before and after her marriage to Marcus Lyon.  Many of the sentiments were written in response to the death of Cordelia's beloved child Perla [or Perle]. 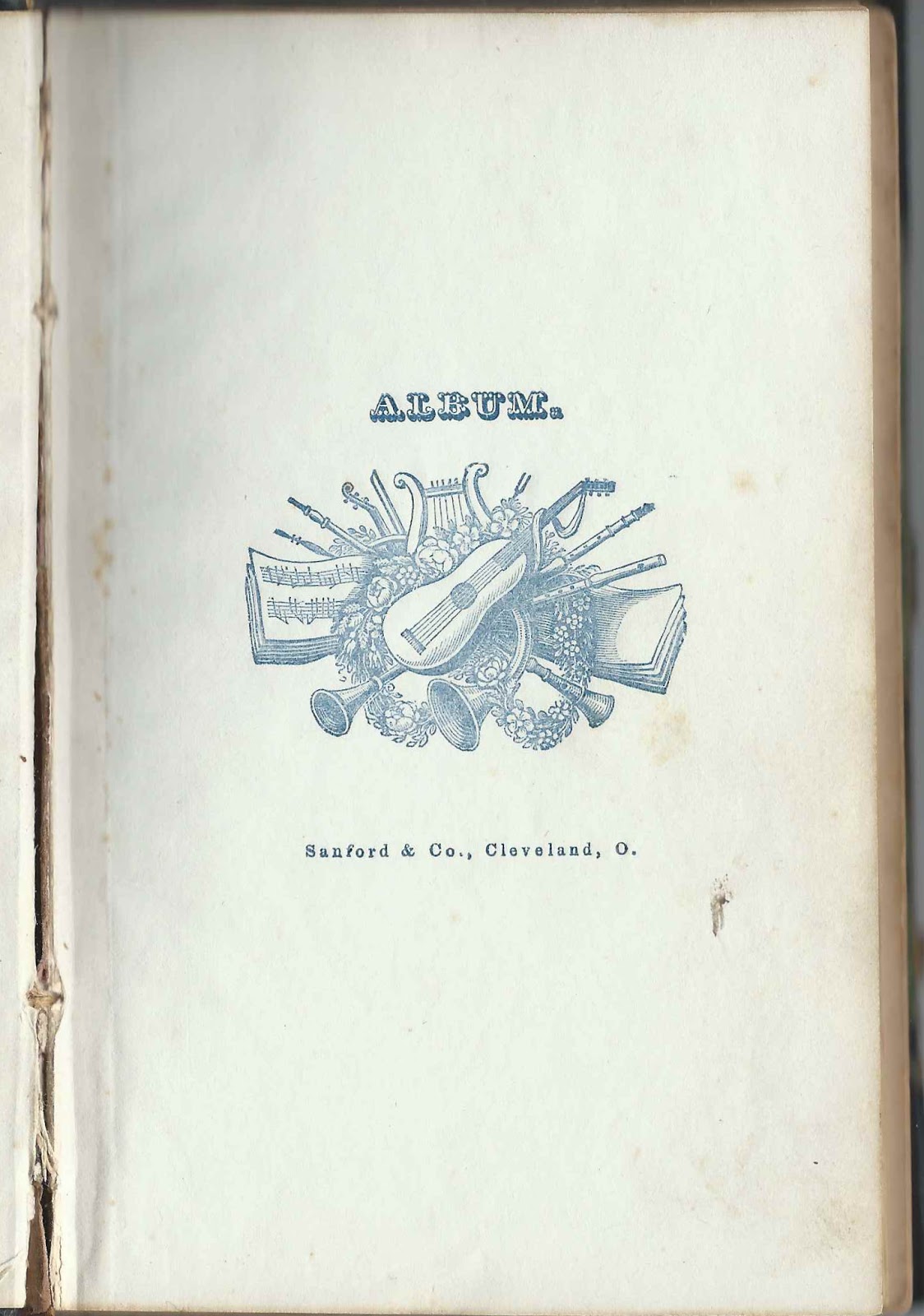 The album is approximately 7" x 4-3/4" and contains the sentiments of 36 of Cordelia's relatives, friends and pastors.  An alphabetical list of the signers appears at the end of this post.  There are two engravings in the album.

There are three pages that reflect the missionary work of Massachusetts natives Rev. Samuel Clapp Pixley and his wife Louisa (Healy) Pixley in South Africa.  Rev. Pixley inscribed his page to "Cousin Cordelia."  In the page signed by Louisa (Healy) Pixley on March 16, 1883, she mentioned Inanda, "Our Home", which was their mission at Nahal.

Rev. Pixley was responsible for the first translation of the Bible into Zulu and for arranging for the education in Massachusetts of promising student Pixley ka Isaka Seme, who was born at the Inanda mission about 1881, the son of Isaka Sarah (Mseleku), who was the sister of John Langalibalele Dube, first president of the African National Congress. 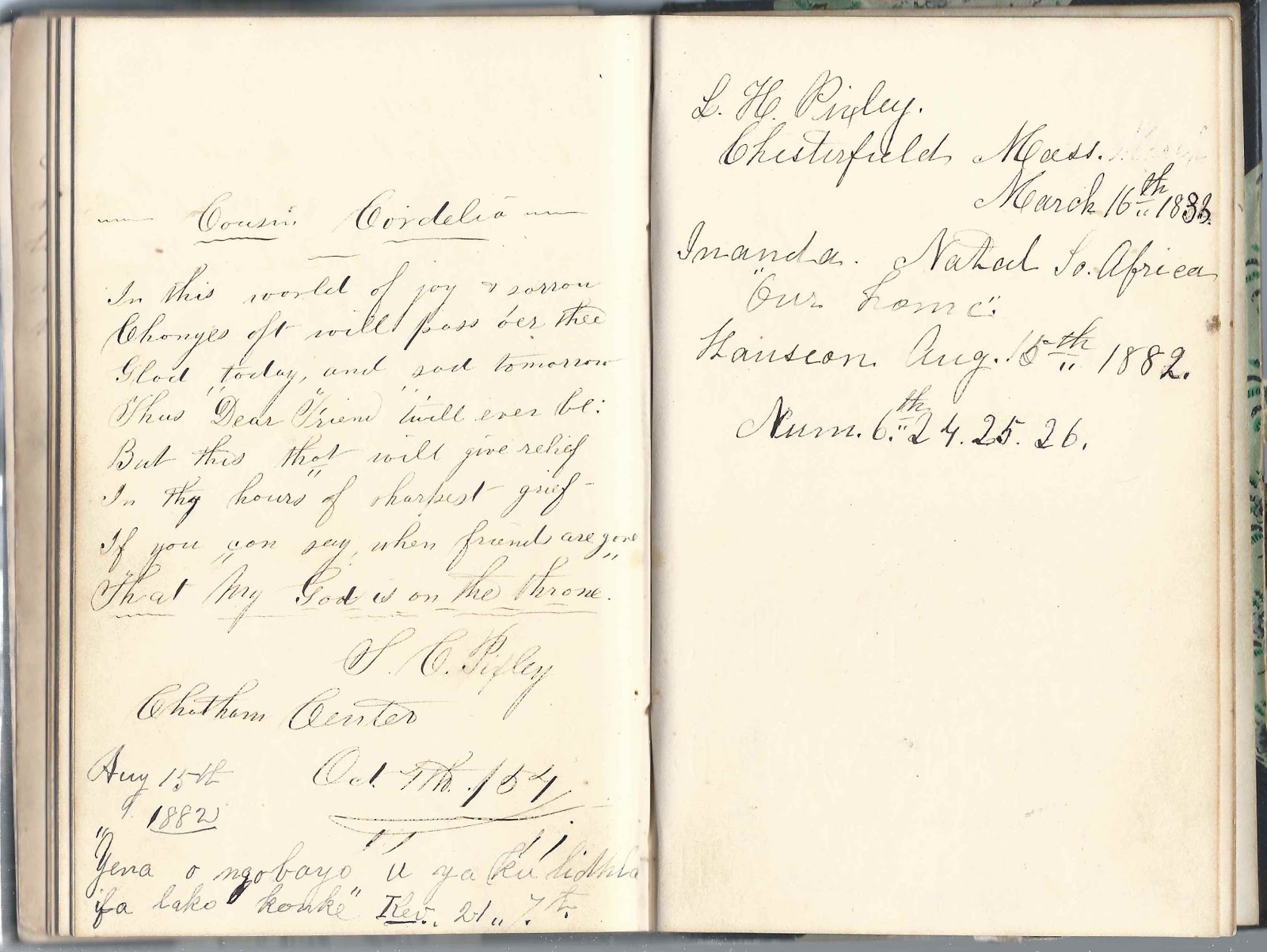 If anyone can translate the bottom of the page below, I'd be very grateful.  It's perhaps signed by two people, or maybe just one, and mentions Chatham Center, Ohio, and Amanzimtoti, South Africa, in 1861.  The signer at Chatham Center, Ohio, was Cordelia's cousin, or the cousin of her husband, Marcus Lyon. 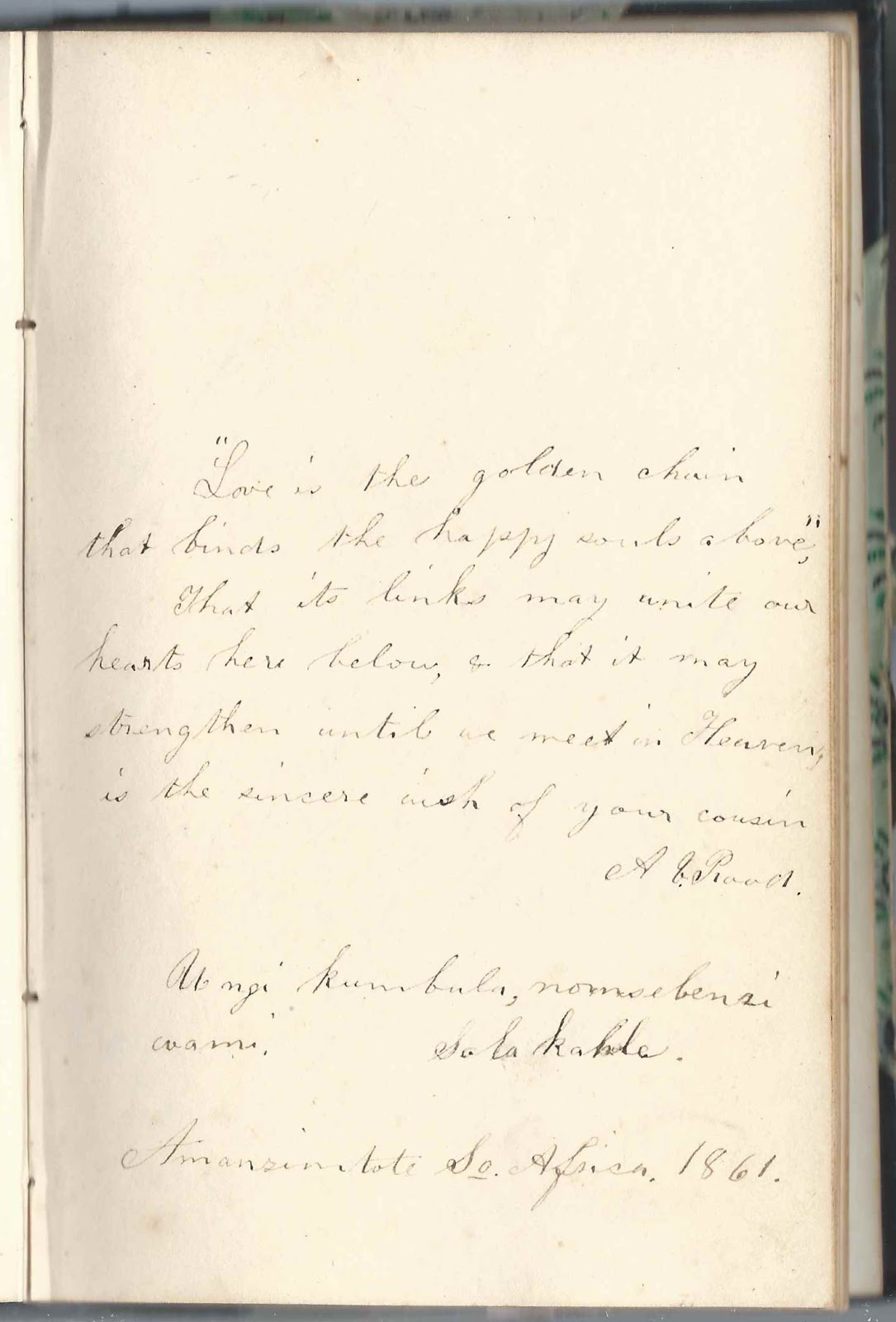 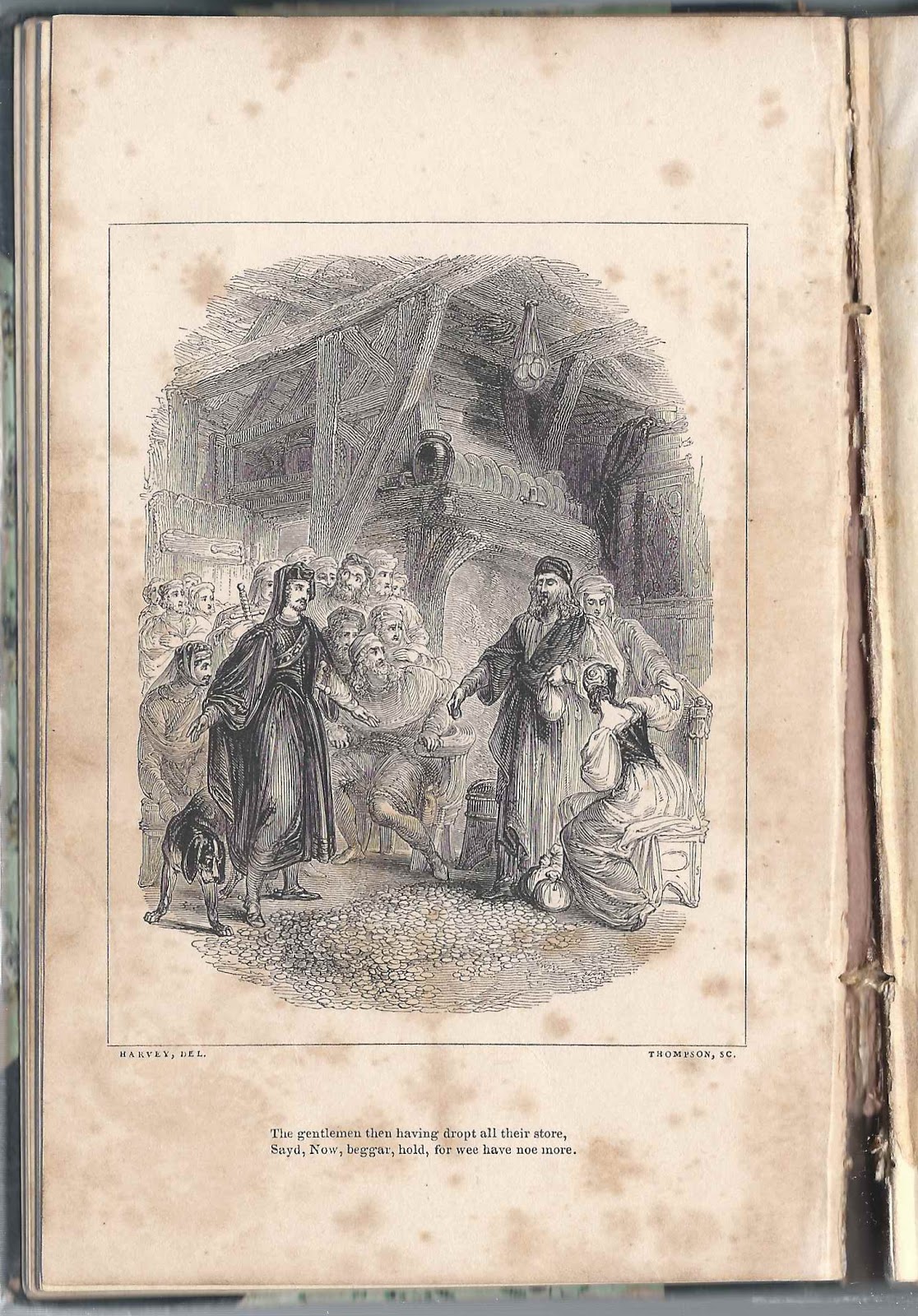 Ebenezer signed a page at Chatham, Ohio, on June 10, 1855; he inscribed the page to "Dear daughter" and attempted to comfort her in her sorrow at the loss of "Sir Arthur and dear Perla".  He mentioned that he had lost a daughter and two sons. 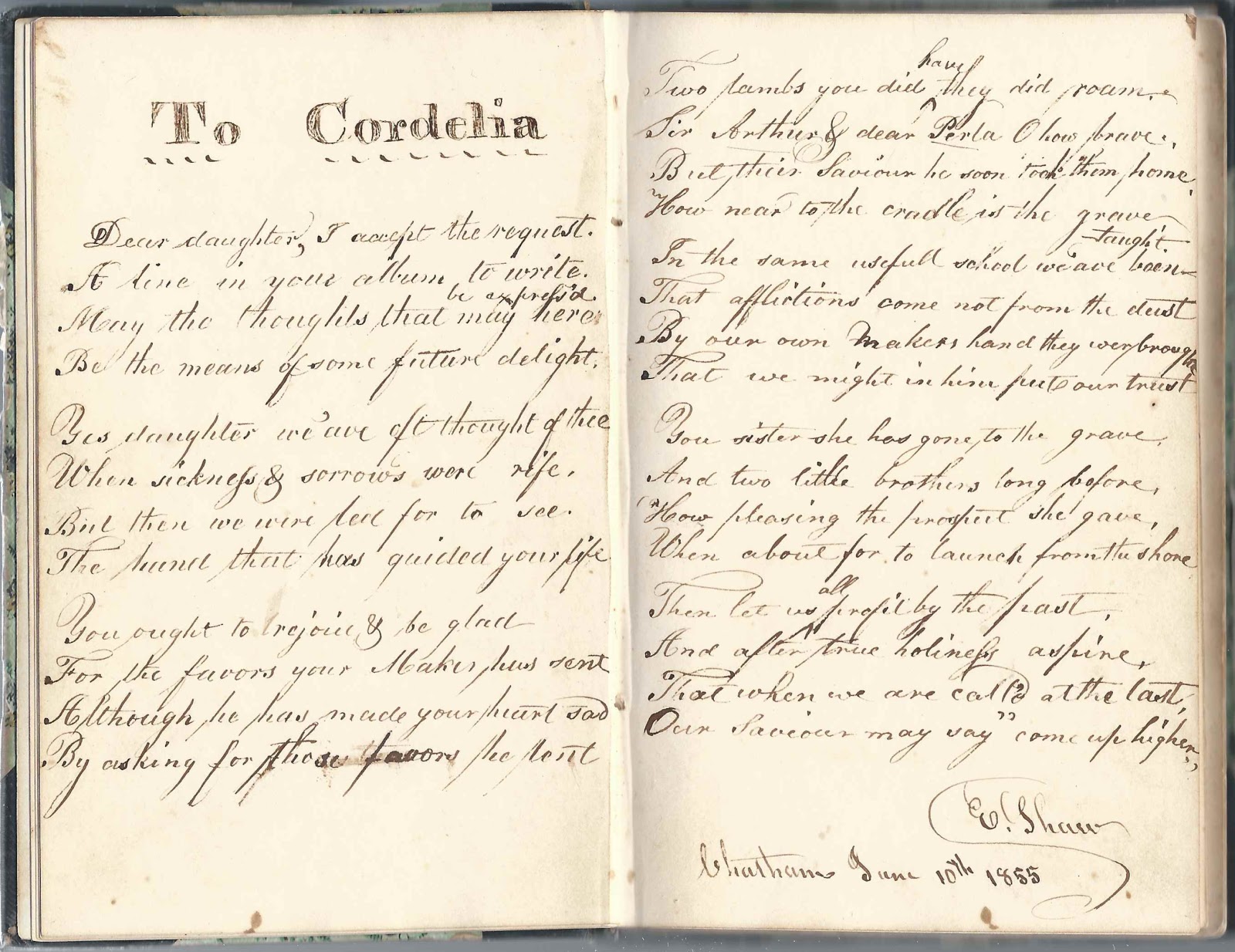 The story of how Ebenezer Shaw and family of Cummington, Massachusetts, came to Ohio is told in the History of Medina County and Ohio: Containing a History of the State of Ohio, from Its Earliest Settlement to the Present Time ... , a History of Medina County ... , Biographical Sketches, Portraits of Some of the Early Settlers and Prominent Men, Etc., written by William Henry Perrin, J. H. Battle and Weston Arthur Goodspeed, and published in 1881.  Click on the image to enlarge it. 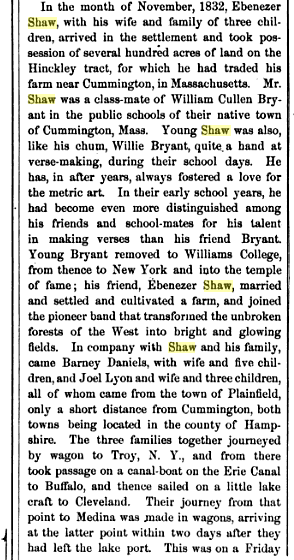 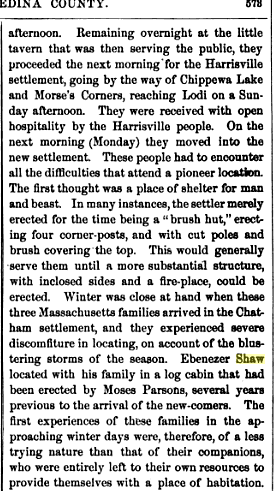 The T. Shaw who signed a page may have been Cordelia's brother or cousin Thomas S. Shaw.  I found places where his parents were given as Ebenezer and Nancy (Torrey) Shaw, and other places where he was shown as the son of John and Polly (Beals) Shaw. 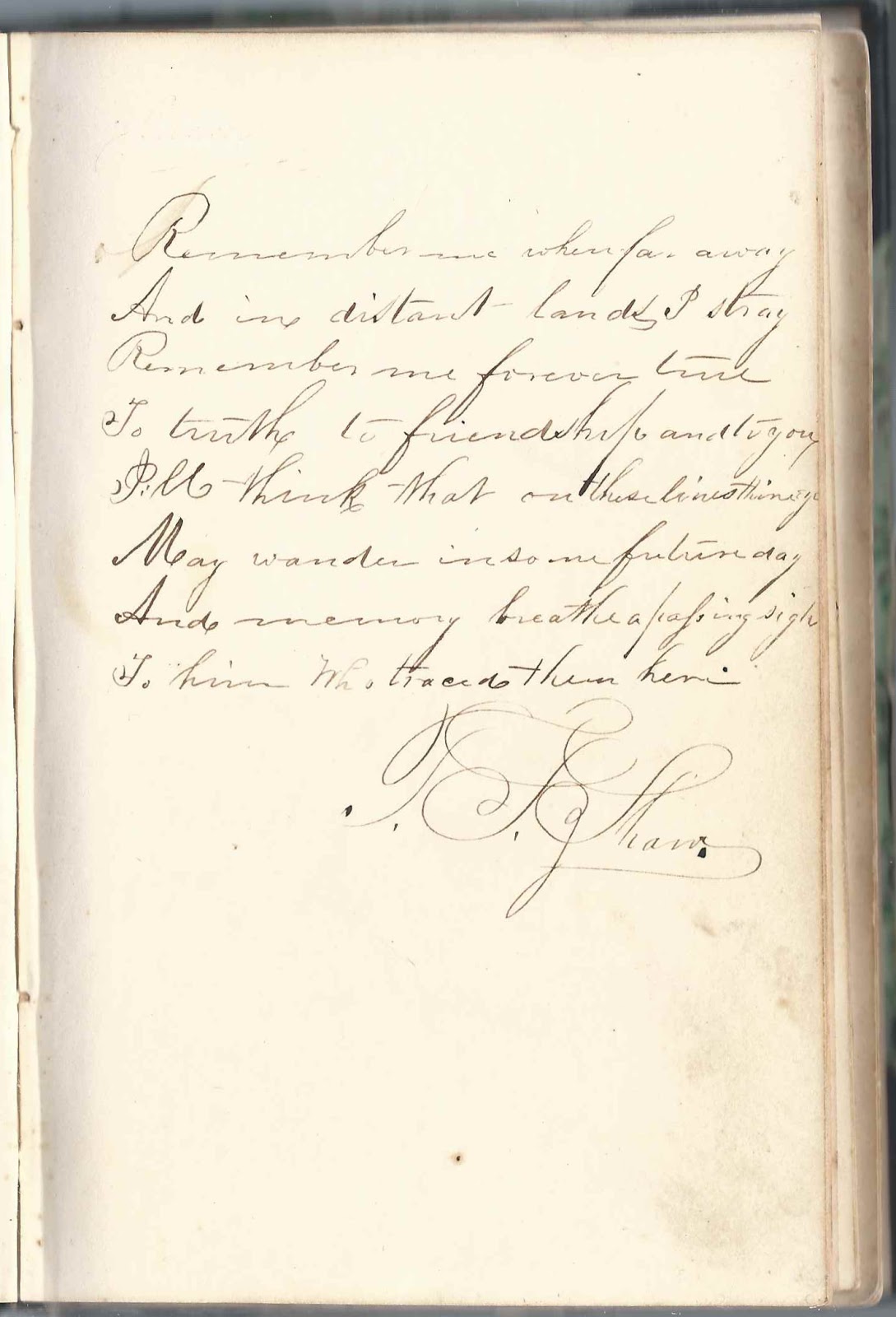 Several other people mentioned a family relationship with Cordelia, though some of there were actually in-laws.  Among these, a cousin who signed with initials at Chatham, Ohio, in October 1855.  The initials look like L. B. P., but I'd be interested in readers' interpretations. 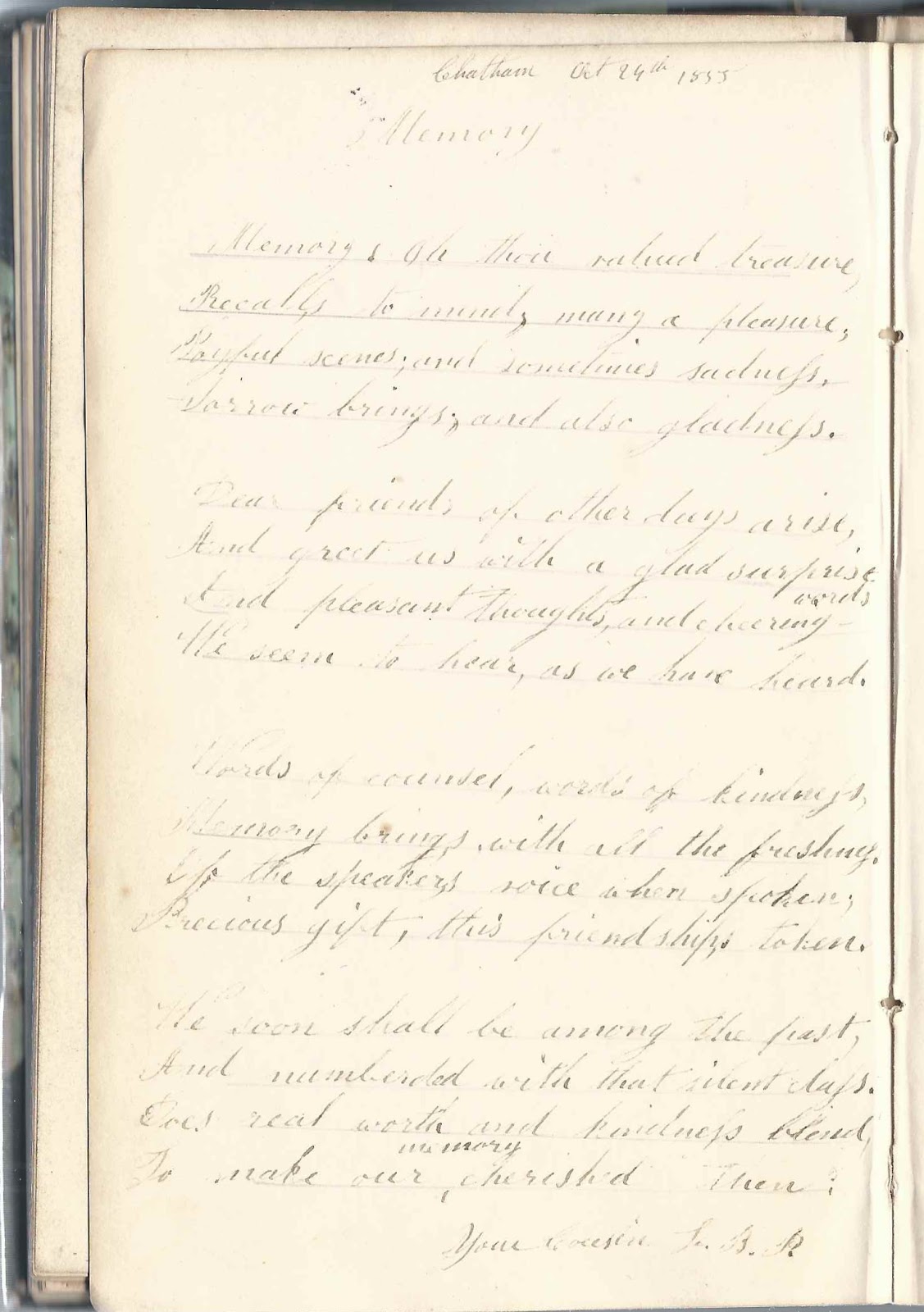 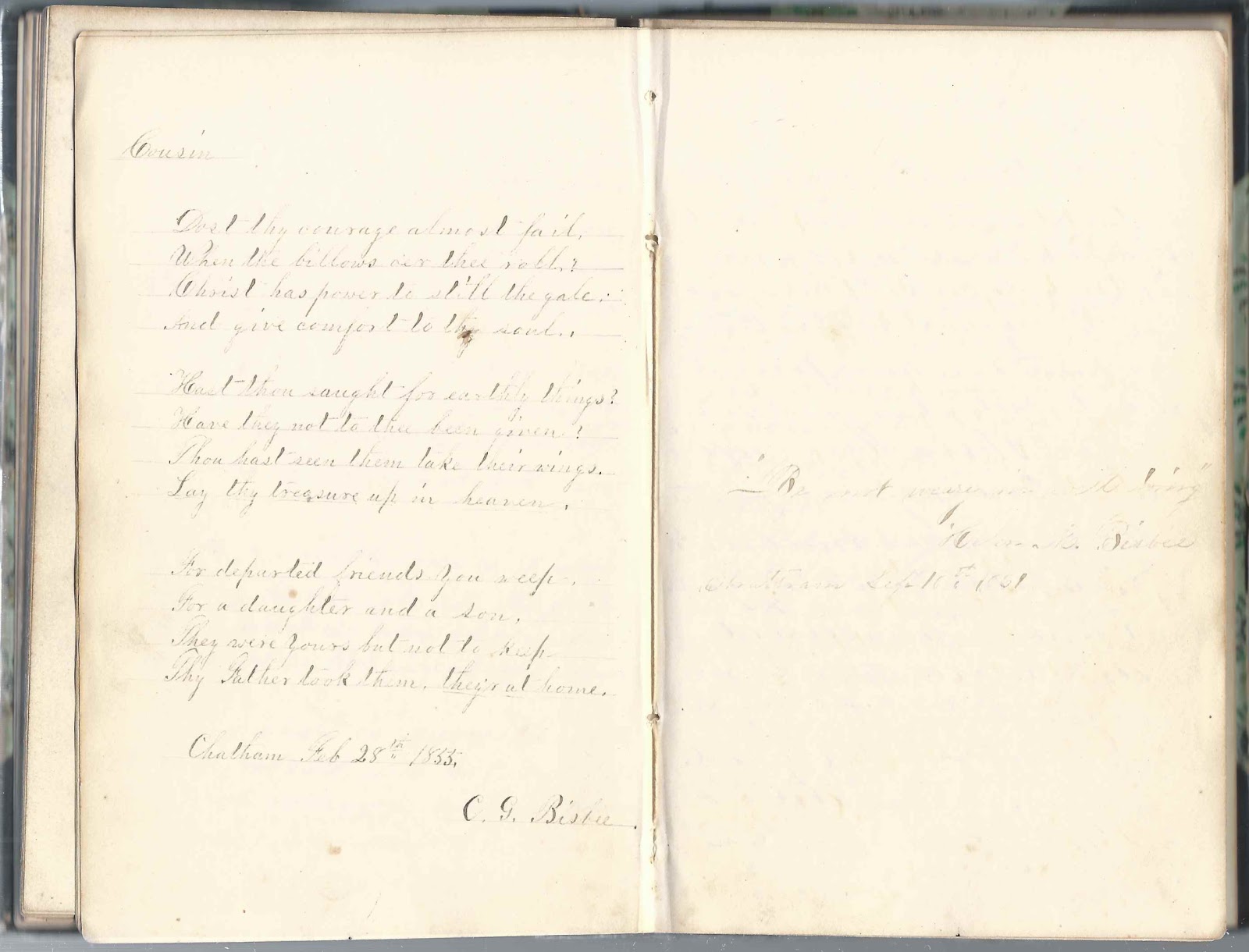 About 1848, Cordelia Shaw married Marcus Lyon, son of Elias and Relief (Thayer) Lyon, who had also brought their family from western Massachusetts to Chatham, Ohio.   Marcus was born 5 February 1827 at Goshen, Massachusetts.

From reading between the lines in the album, it appears that Cordelia had lost another child, perhaps the first child named Arthur, before she lost her Perla.  There's a male child named Perly with them in the 1860 Census of Chatham, Ohio; I'm not sure if this was another child who also perhaps didn't survive, or a nickname for son Arthur W. Lyon.  Cordelia and Marcus had at least two children who survived into adulthood:

Marcus was involved in several enterprises, chief of which was the Wauseon Flour Mill, in which an early partner was his brother-in-law Joel Brigham, whose wife was Marcus' older sister Betsey (Lyon) Brigham.  Joel and Betsey Brigham signed facing pages of sympathy and support in Cordelia's album at Chatham, Ohio, on November 13, 1857. 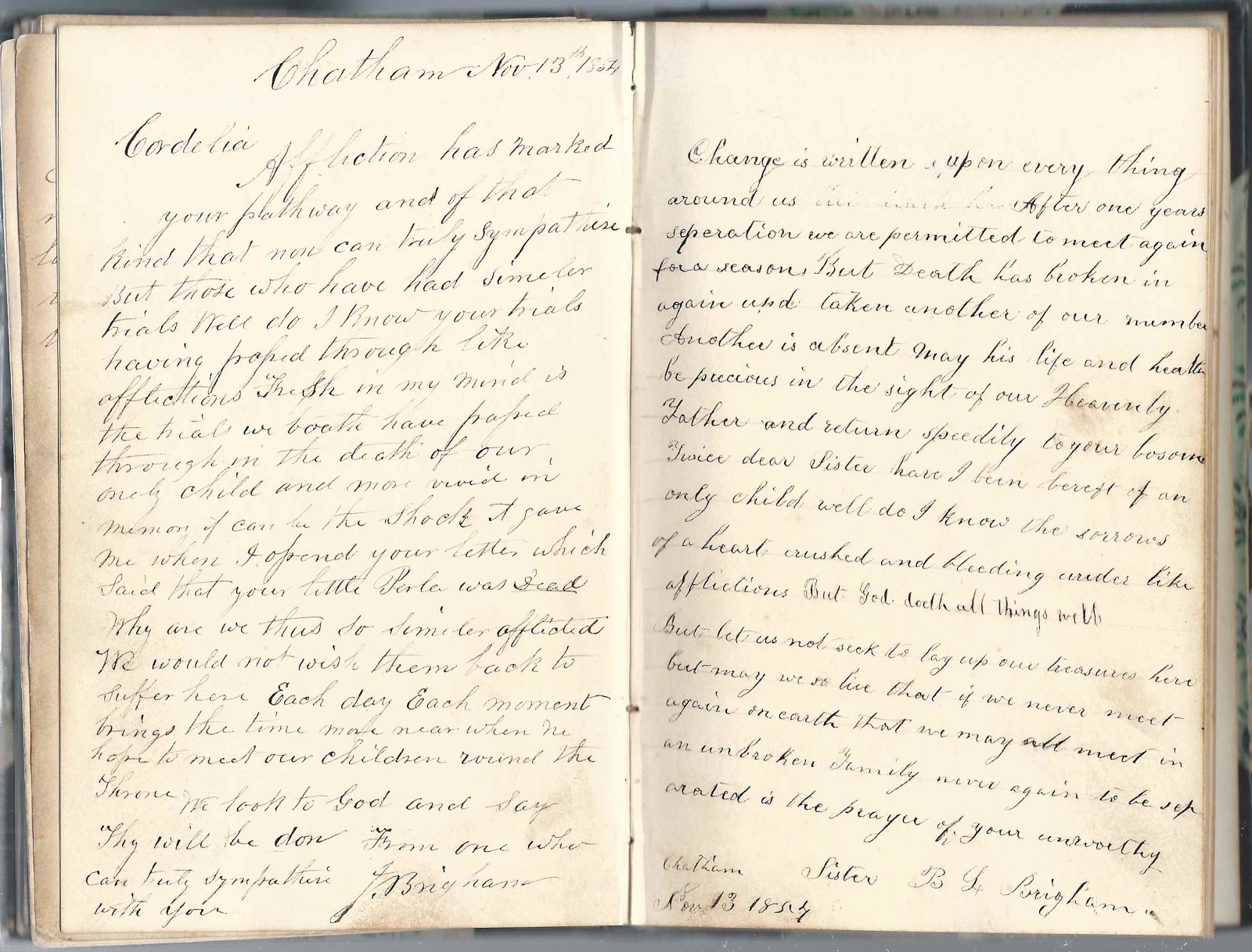 Another of Marcus' sisters was Harriet N. (Lyon) Gardner, wife of Weston Duane Gardner.  Weston signed facing pages, and Harriet signed the following page at Chatham, Ohio, on November 19, 1854.  Weston indicated that they were about to make their new home in Iowa. 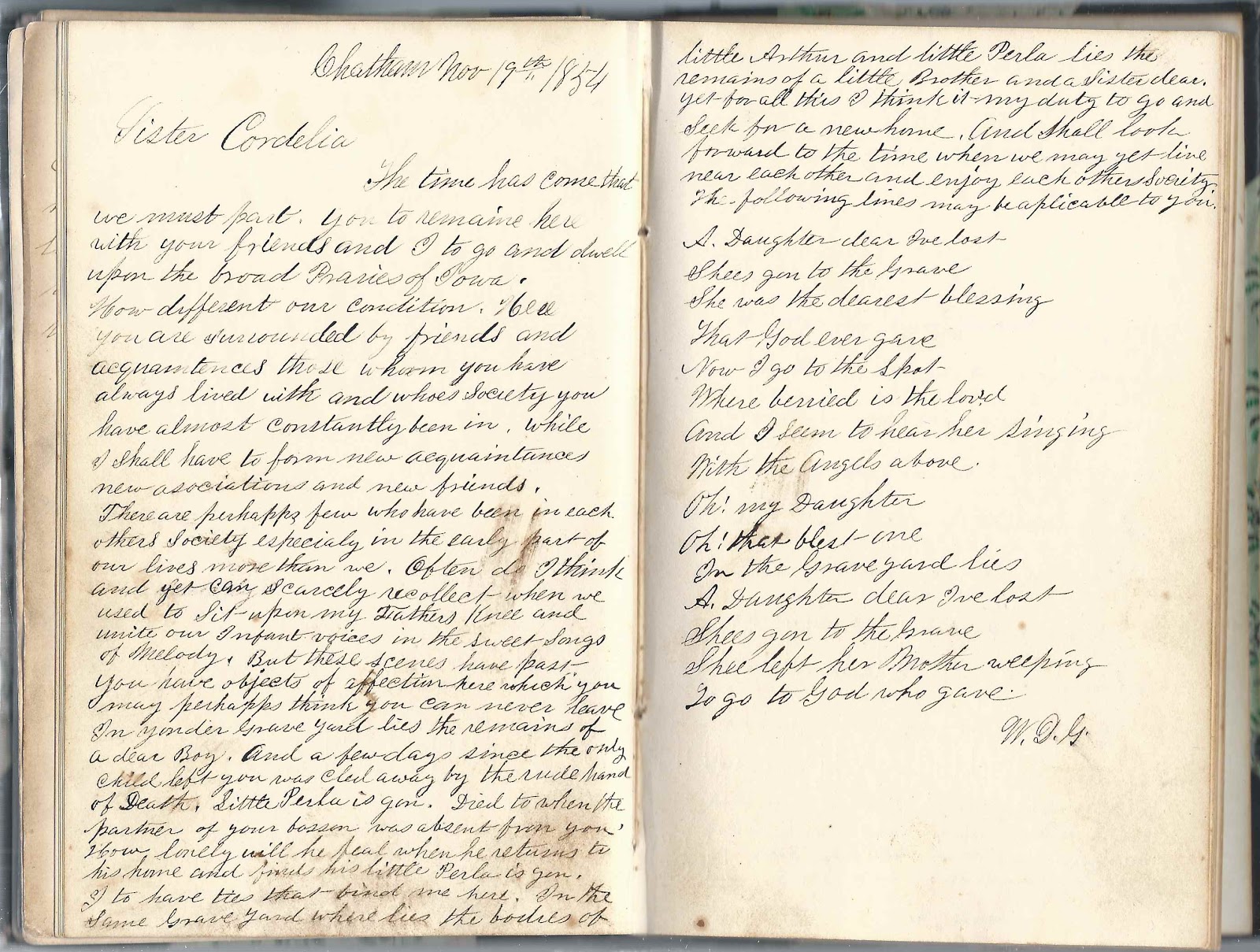 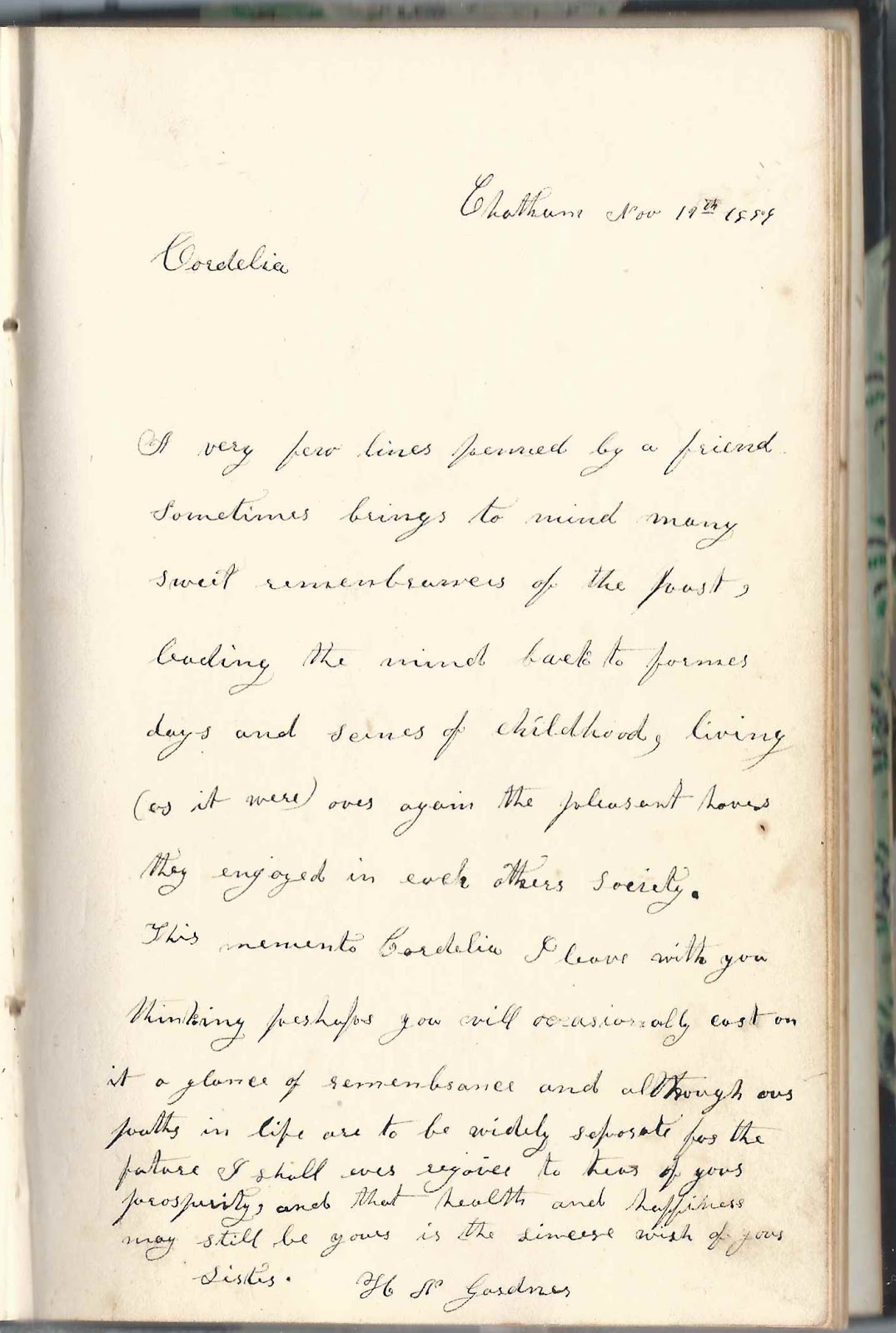 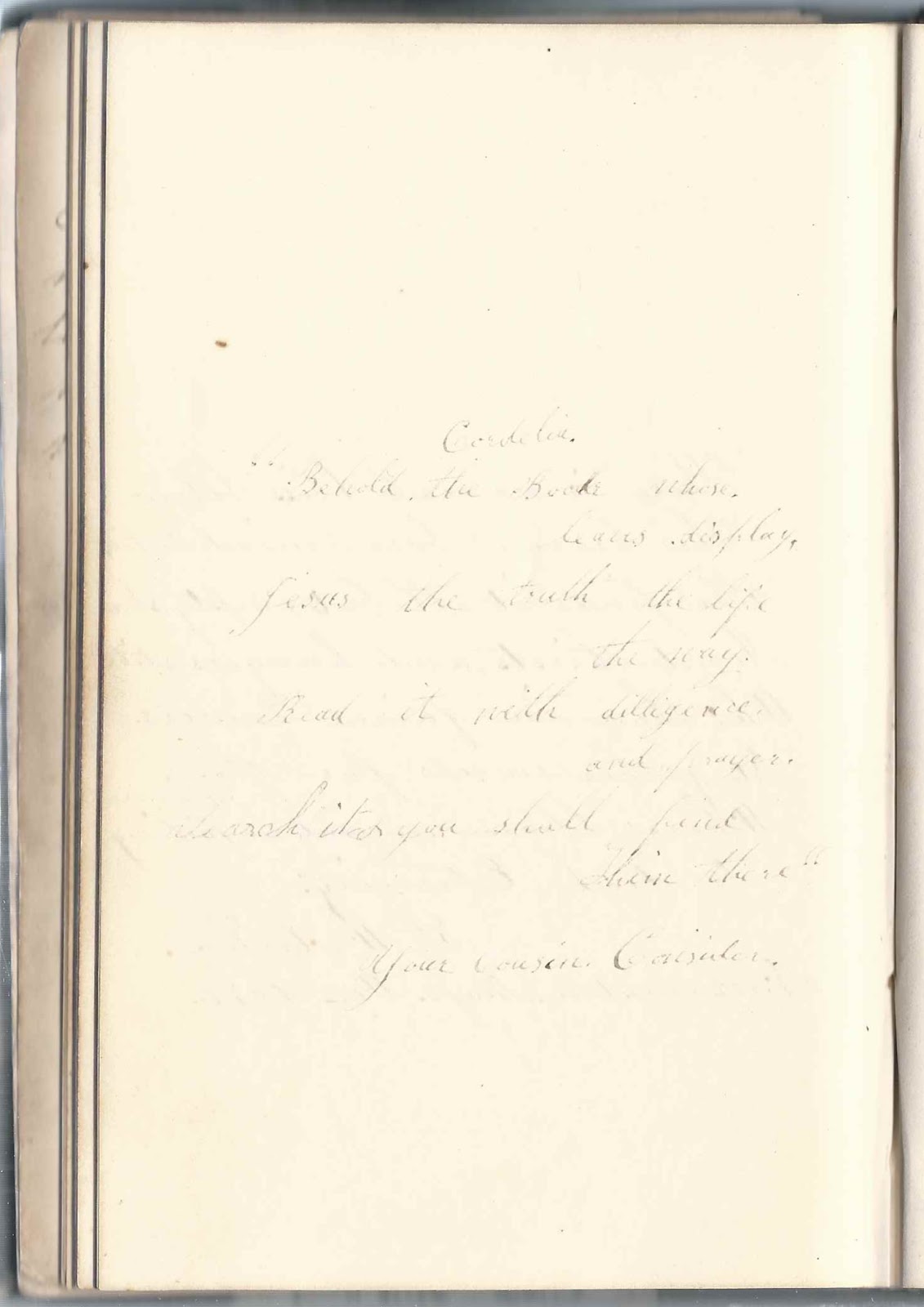 Marcus Lyon died in 1902, and Cordelia in 1916.  They're buried at the Wauseon Union Cemetery at Wauseon, Ohio.

Harriet P. White inscribed a page to Miss Shaw at Harrisville, Ohio, on February 25, 1847 and painted a theorem-like floral arrangement. 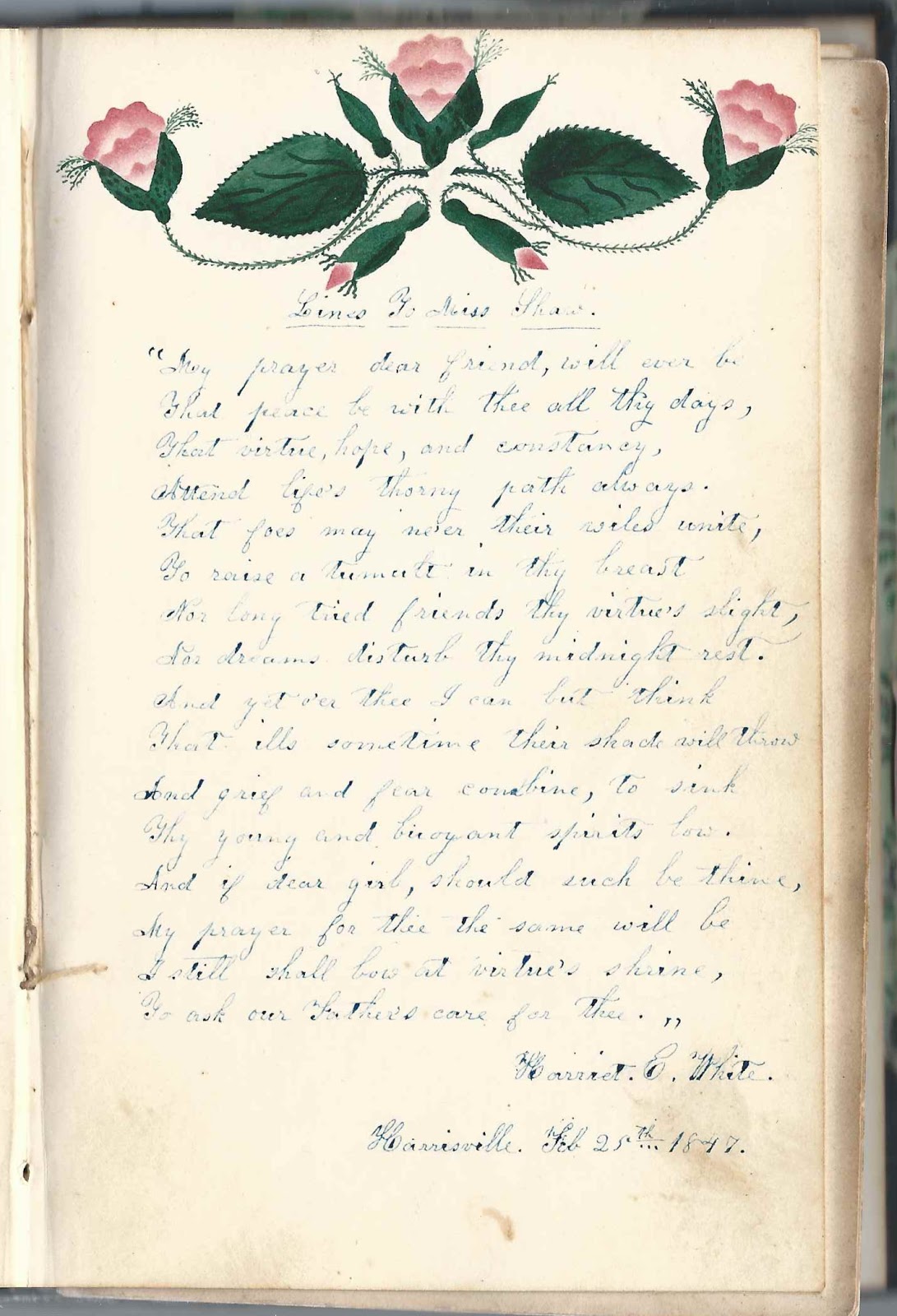 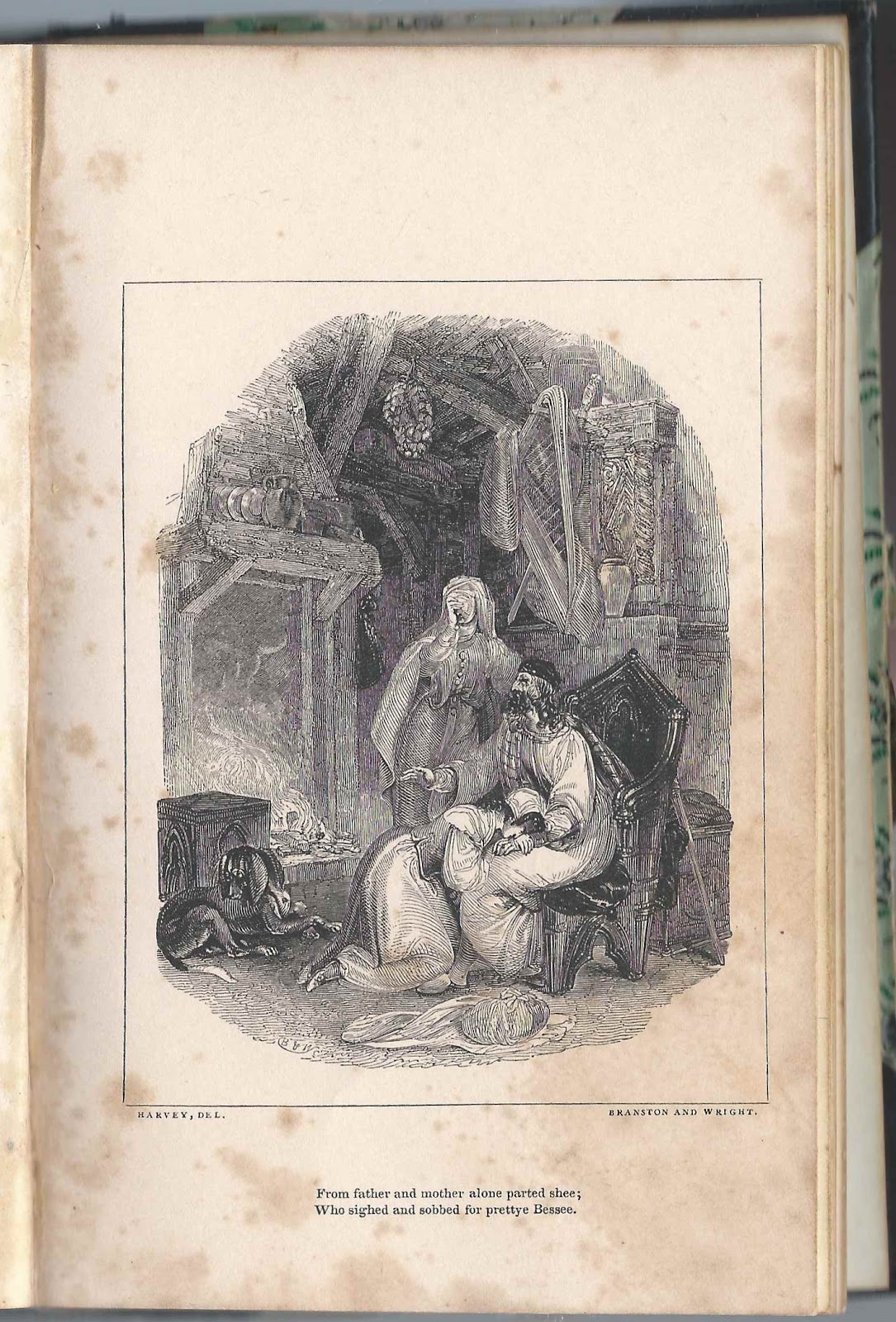 Surnames in the album:

Signers in the album:   [Note: Given names within a specific surname may not be in alphabetical order.]

Posted by Pam Beveridge at 1:07 PM