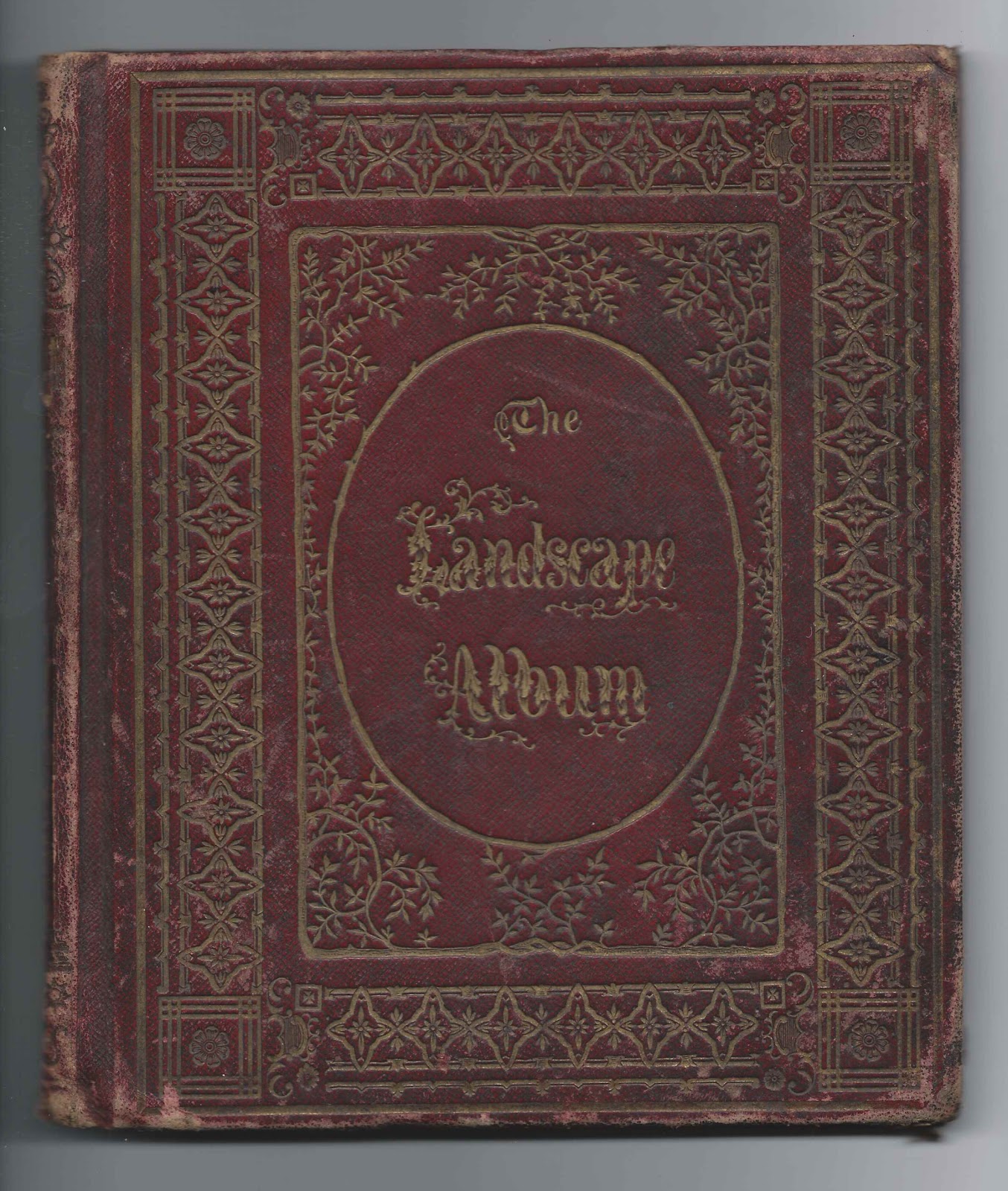 1850s/1860s autograph album of Annie Luella Caughey of Allegheny County, Pennsylvania, kept before and after her marriage to William Henry Brunt.  The album was presented to Annie in the late 1850s by a friend. 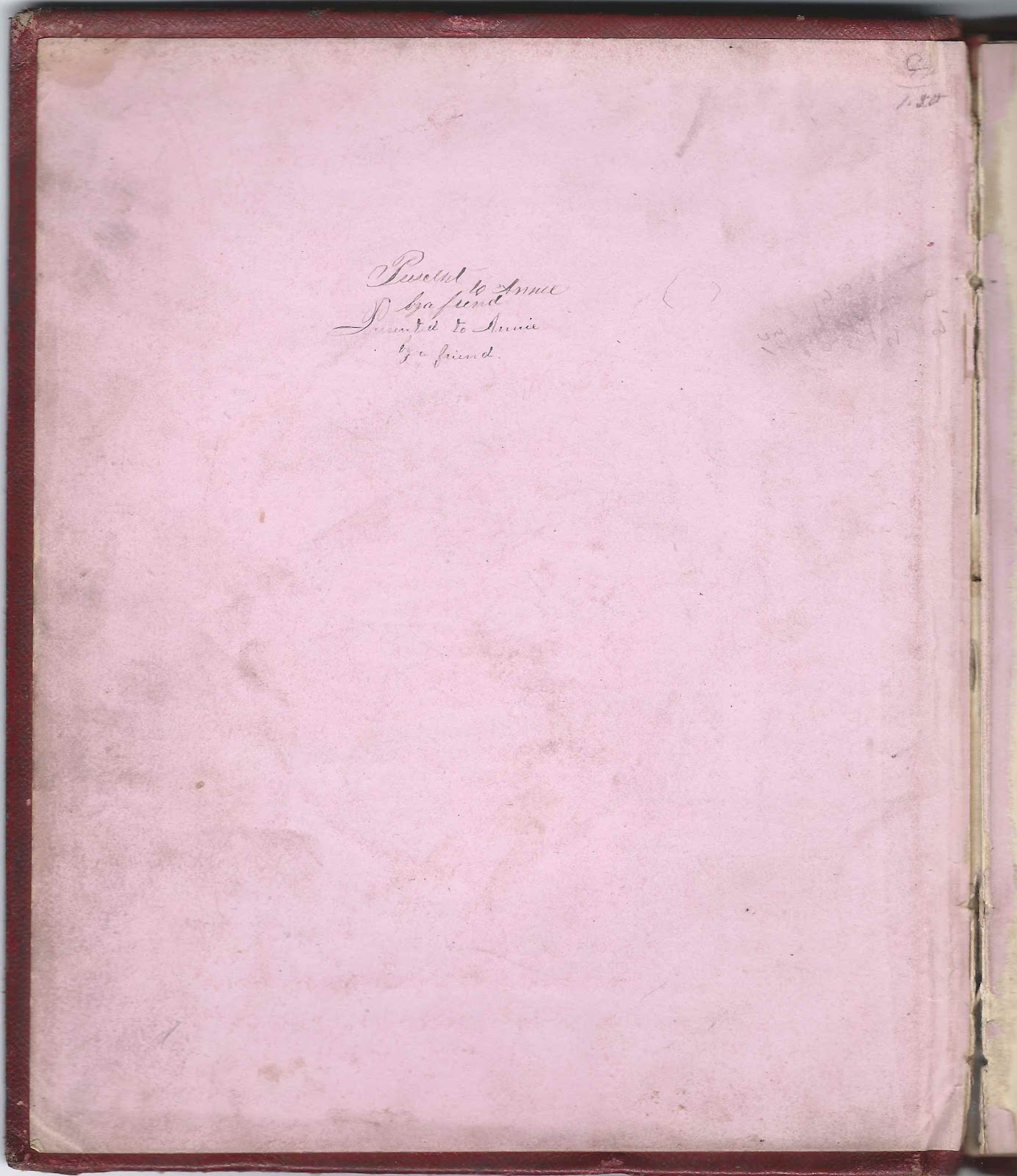 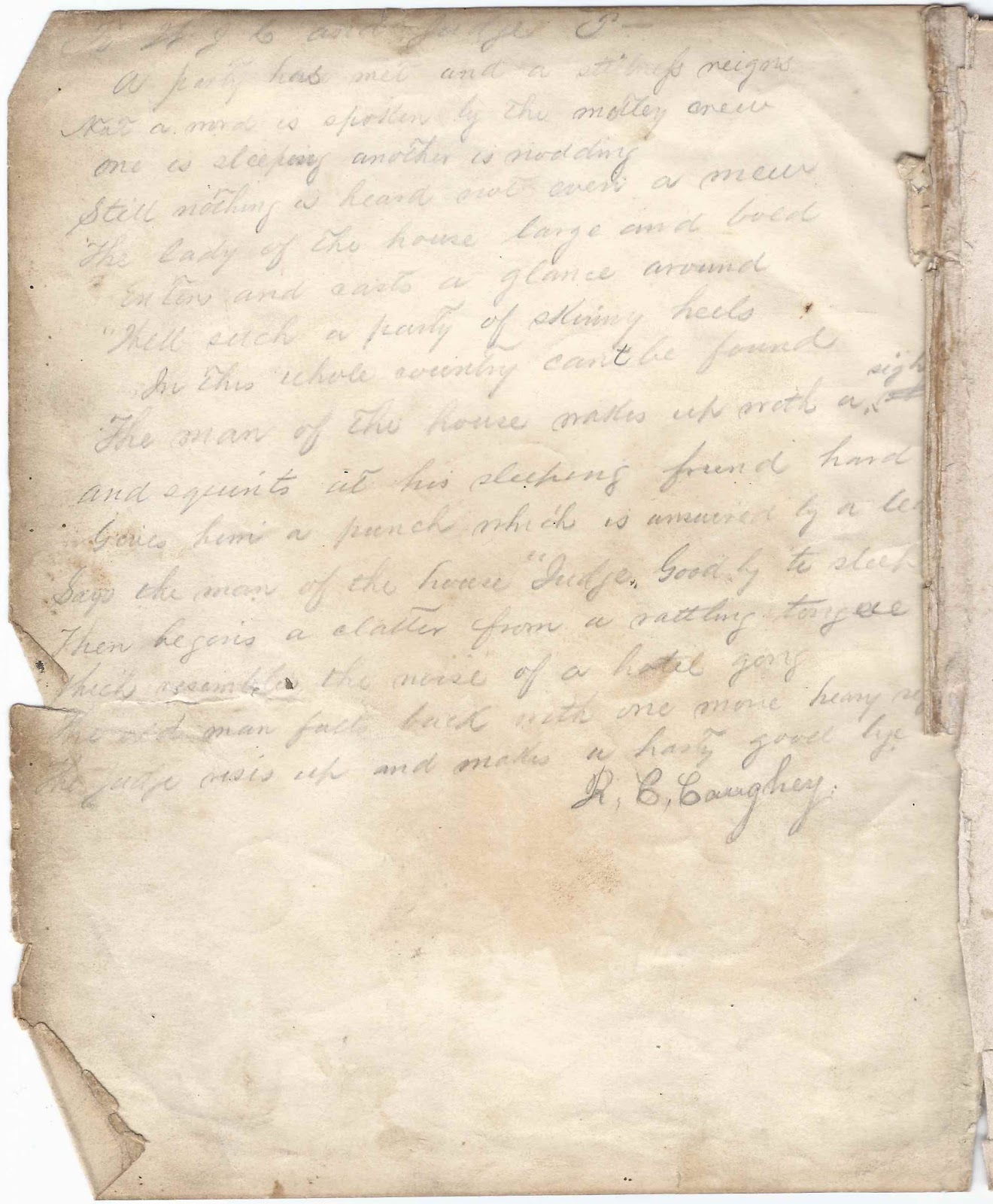 Other people named Caughey contributed to two group pages in the album, including one signed by Annie's sister Mary M. Caughey and the man she would later marry, William M. Speer. 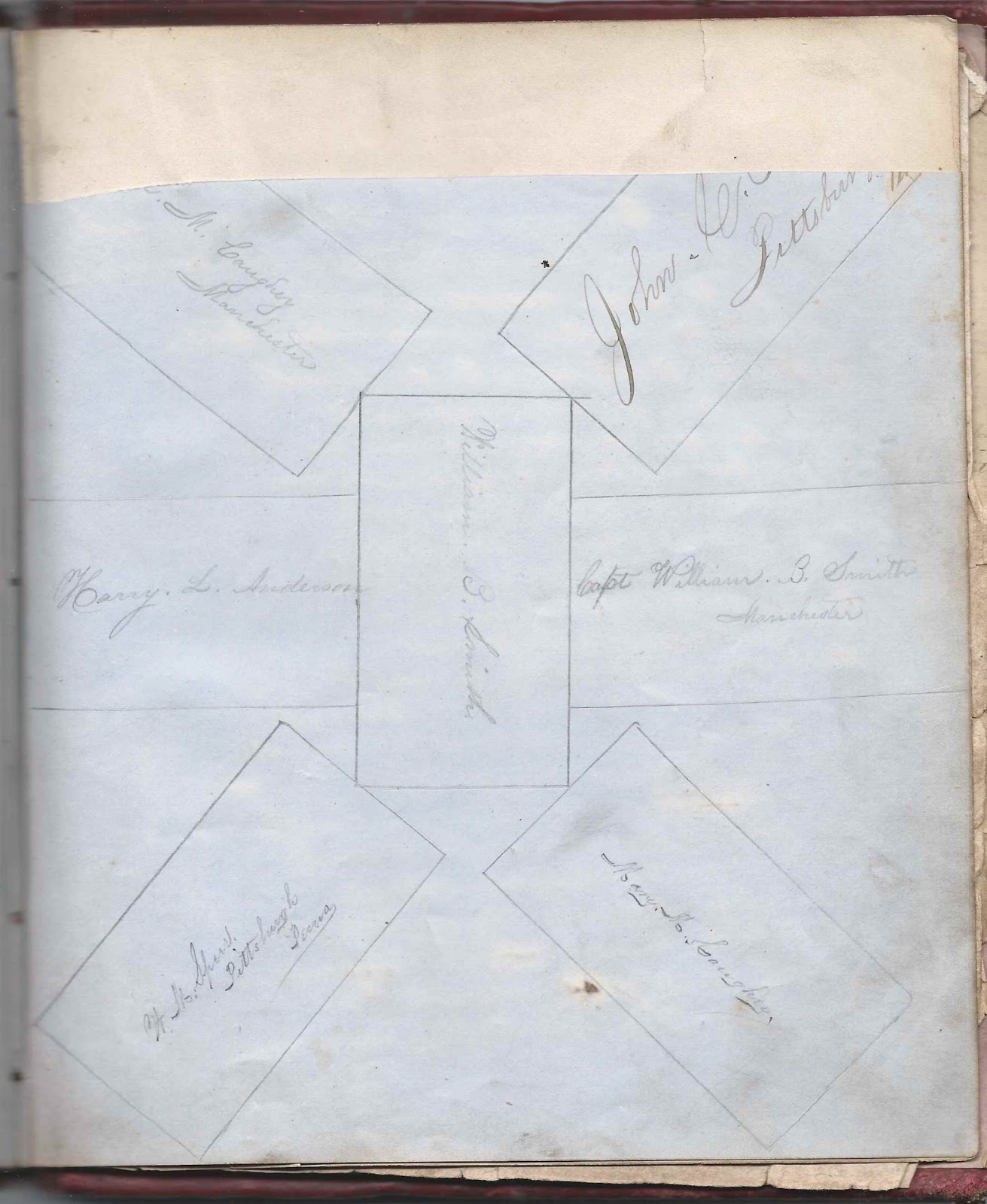 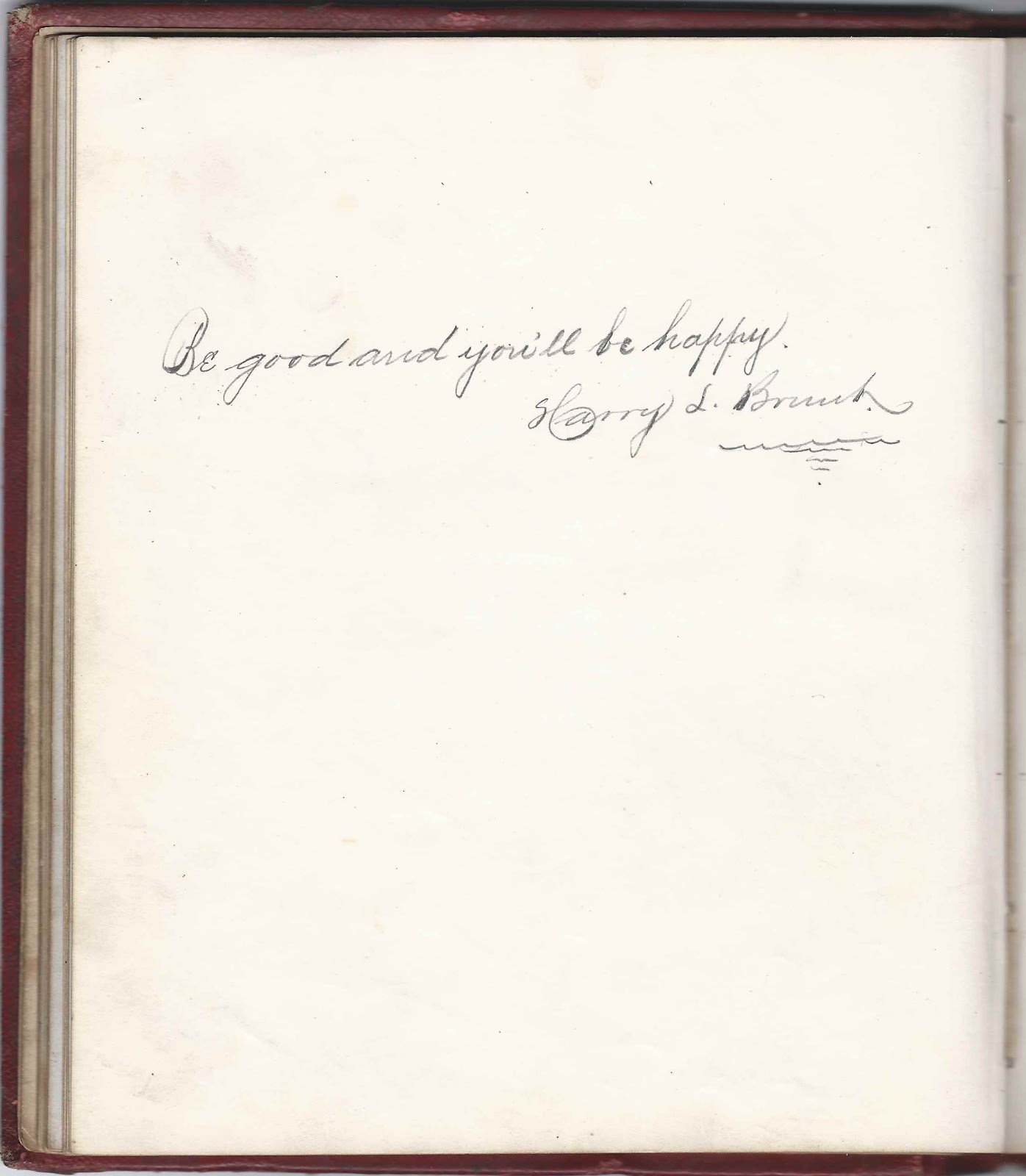 There's a very special page in the album that contains a poem written by Annie about her life and family.  A penciled note at the bottom indicates that the page was penned by Annie's husband.  Whether that means he composed the page, perhaps in honor of Annie after her death, or if he transcribed something that she had written into the album, I don't know.  Regardless, it's a wonderful sentiment that mentions her four children: 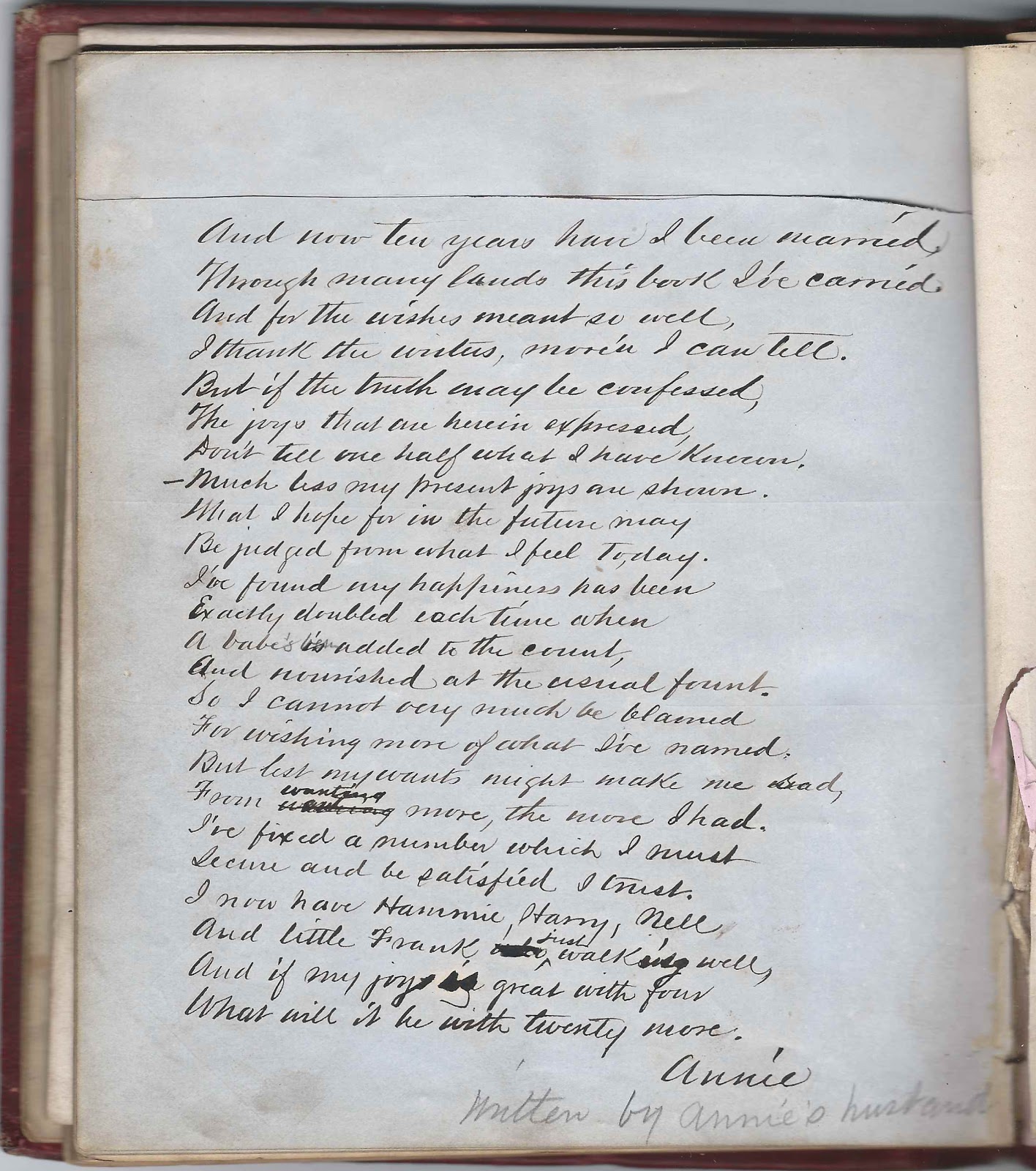 "And now ten years have I been married,
Through many lands this book I've carried.
And for the wishes meant so well,
I thank the writers, more'n I can tell.
But if the truth may be confessed,
The joys that are herein expressed,
Don't tell me half what I have known.
Much less my present joys are shown.
What I hope for in the future may
Be judged from what I feel today.
I've found my happiness has been
Exactly doubled each time when
A babe's added to the count,
And nourished at the usual fount.
So I cannot very much be blamed
For wishing more of what I've named.
But lest my wants might make me sad,
From wanting more, the more I had,
I've fixed a number which I must
Secure and be satisfied I trust.
I now have Hammie, Harry, Nell
And little Frank, just walking well.
And if my joy is great with four
What will it be with twenty more.
Annie

I believe that Annie's album came to light at a later time, and at least two of her children, perhaps all, signed pages in it.   The Nellie L. Brunt who signed a page was presumably Annie's daughter Nellie Lorena Brunt. 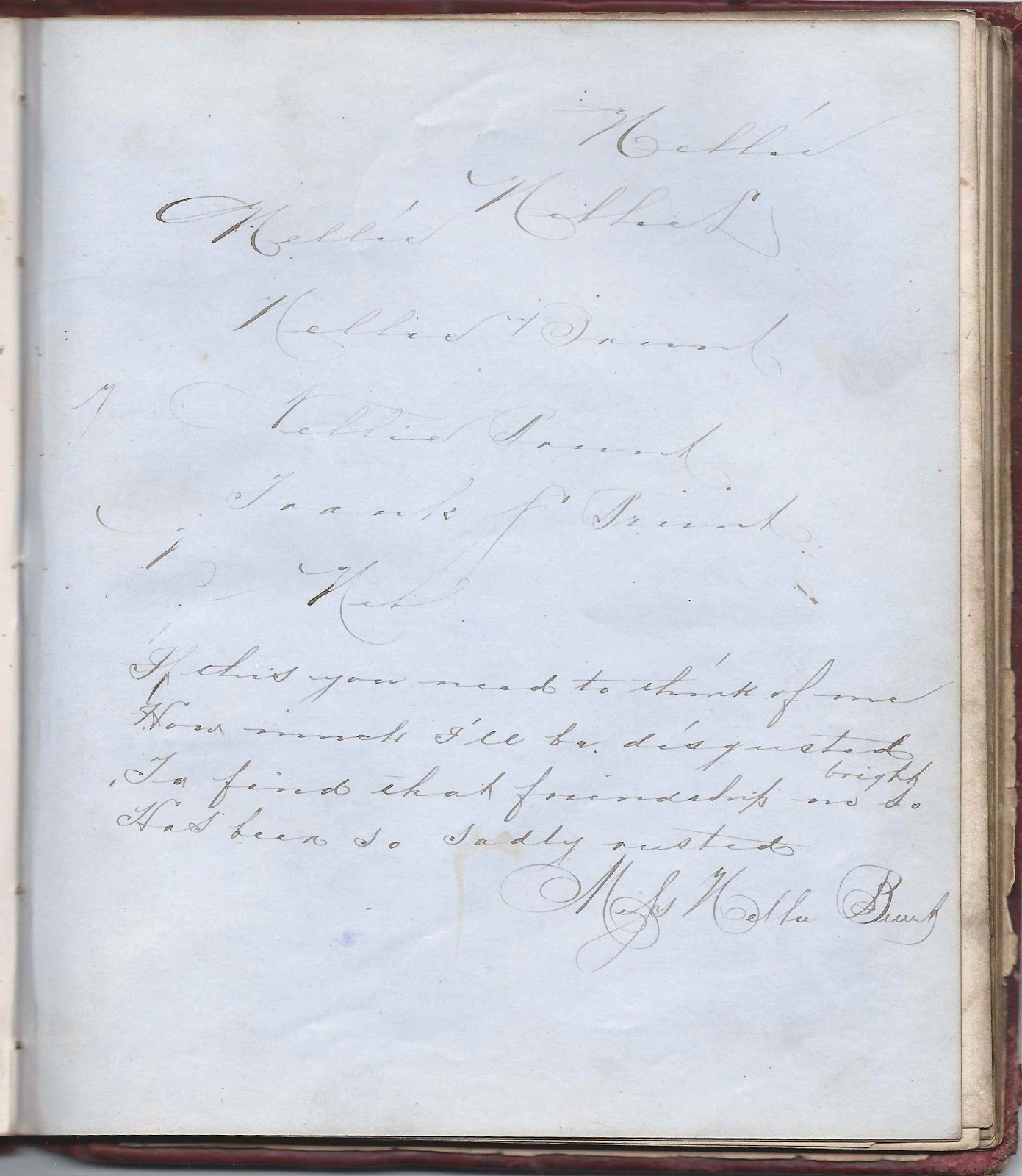 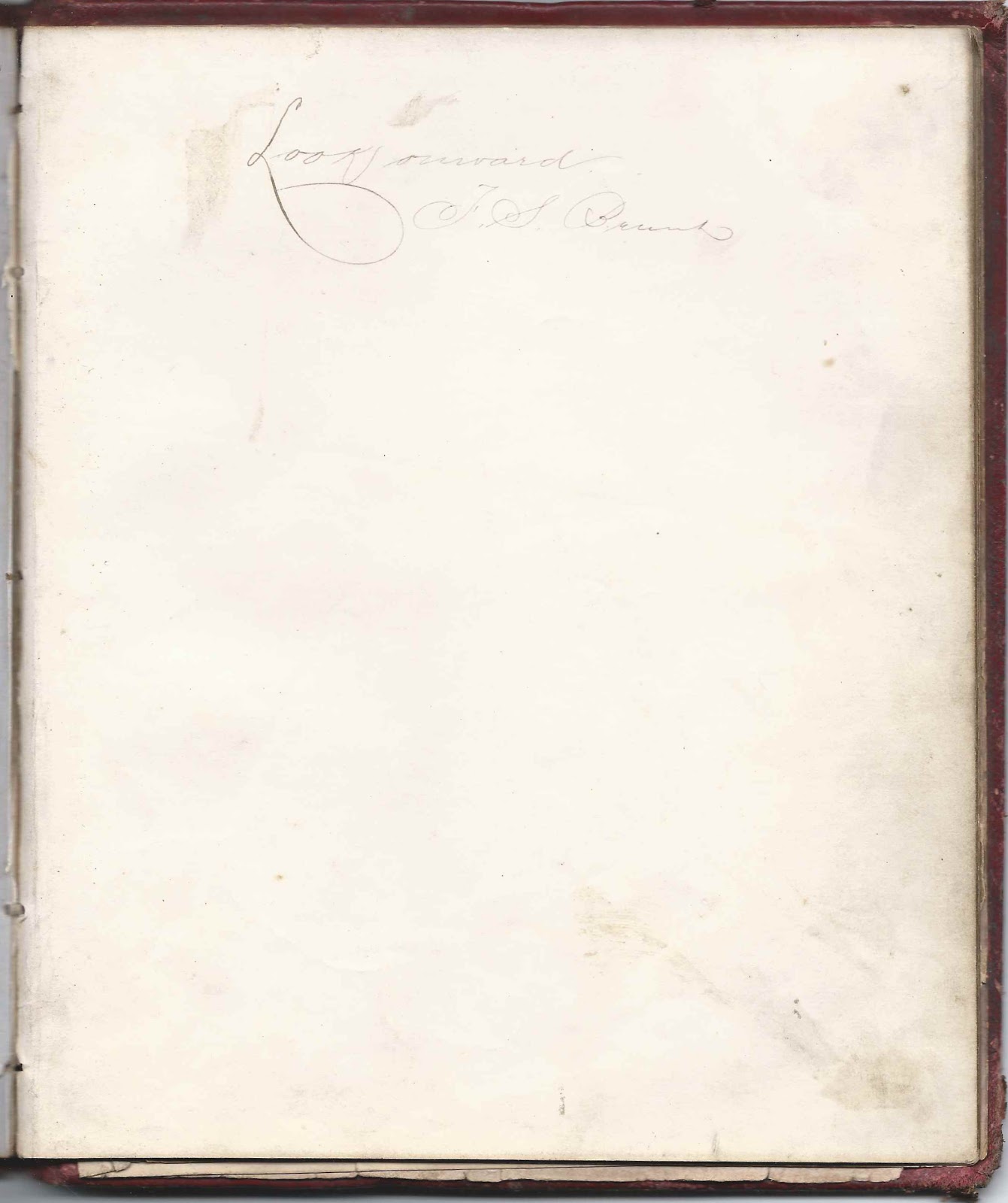 There were quite a few pages where the signers used initials or the handwriting was difficult to decipher, so other Caughey and Brunt relatives likely signed pages in the album.  Family members might be able to tease out more identities from context or from the handwriting in family heirlooms.  If so, please let me know.

A few of the pages I could use some help in deciphering, or that might denote other of Annie's relatives.  I'll number them for the benefit of any readers who might have comments and can tie the comment in to the numbered image.

1)  Appears to be Smith H. Smith, but a reader with knowledge of the families of Allegheny County, Pennsylvania, might have a better perspective. 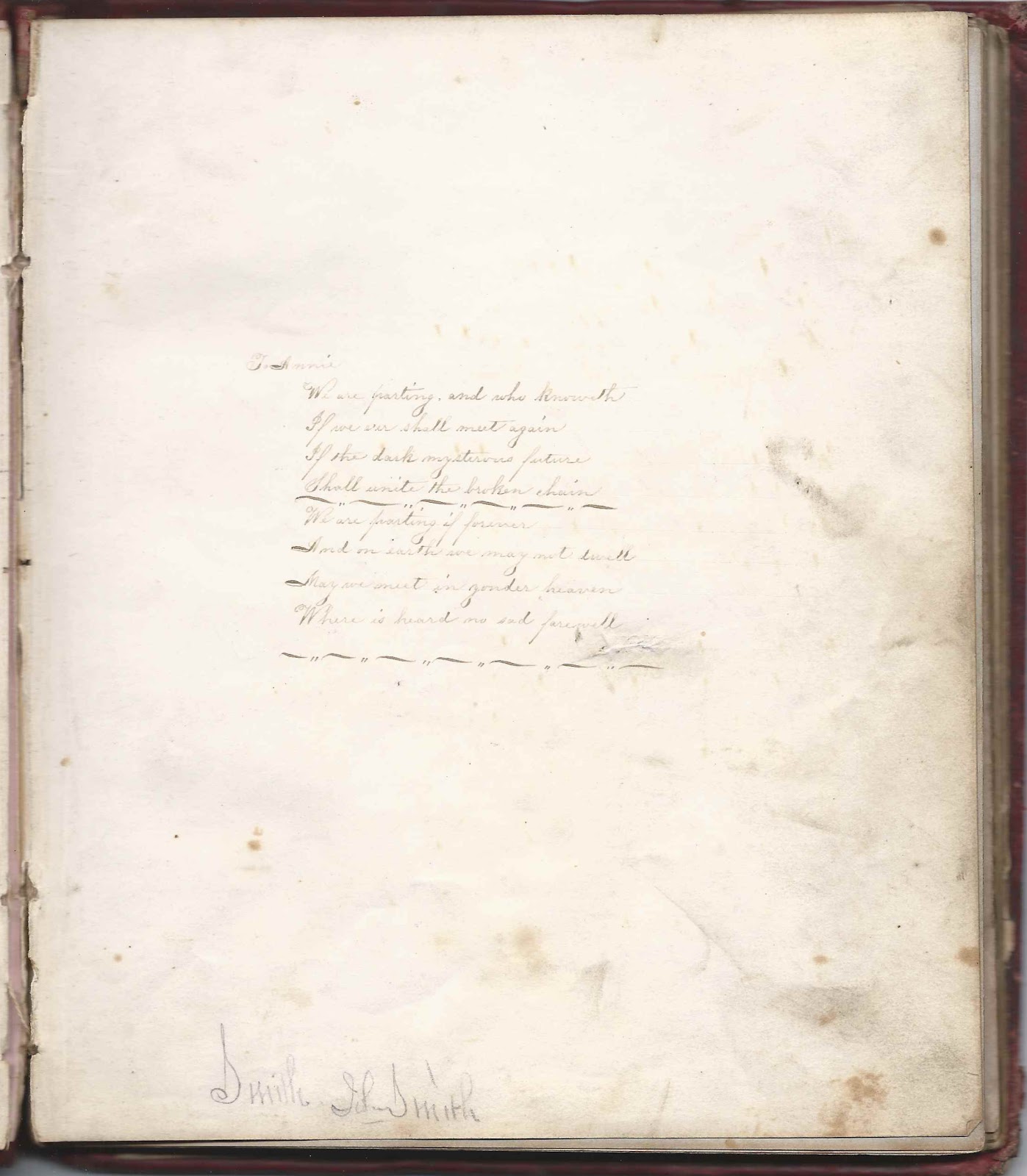 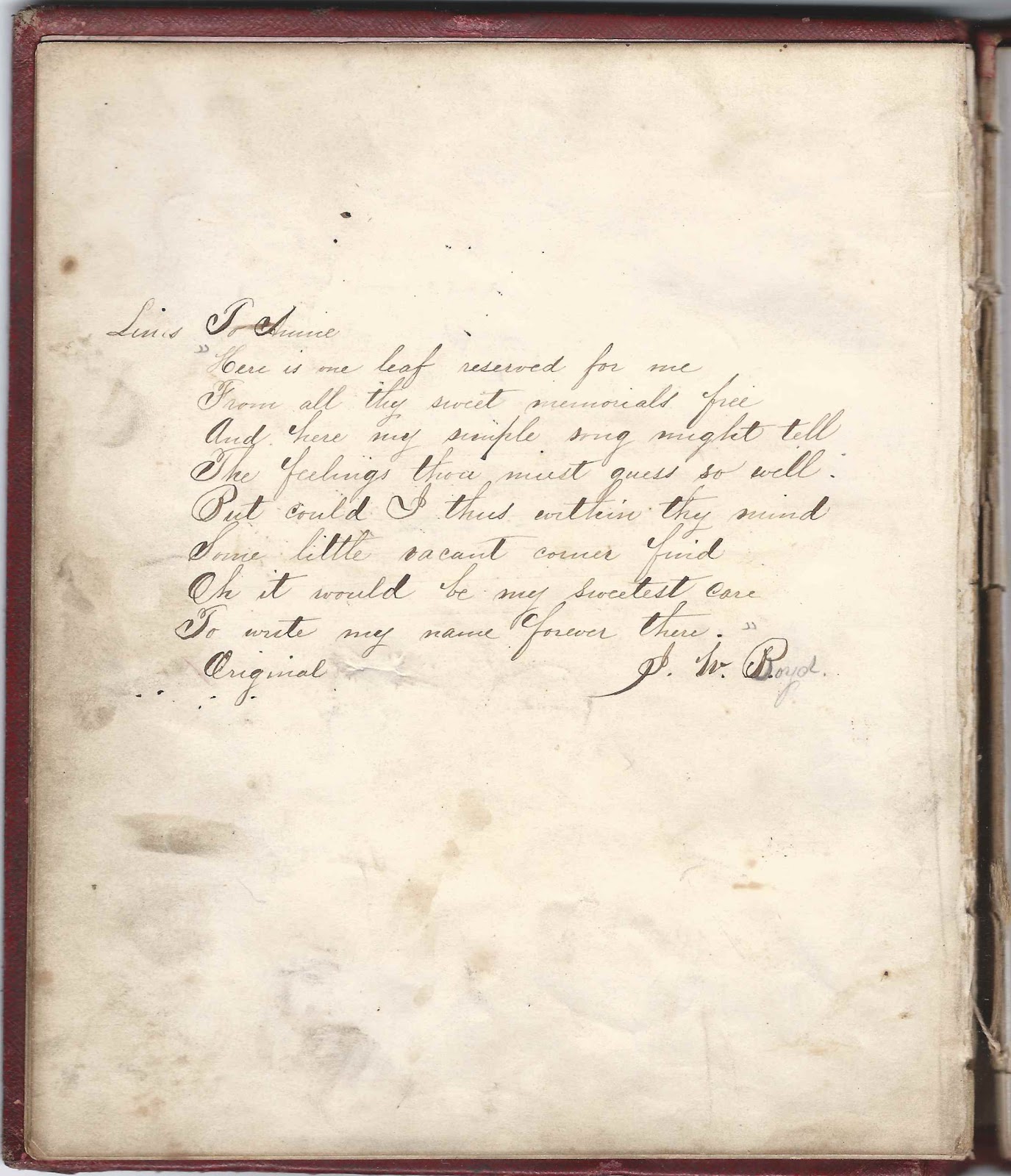 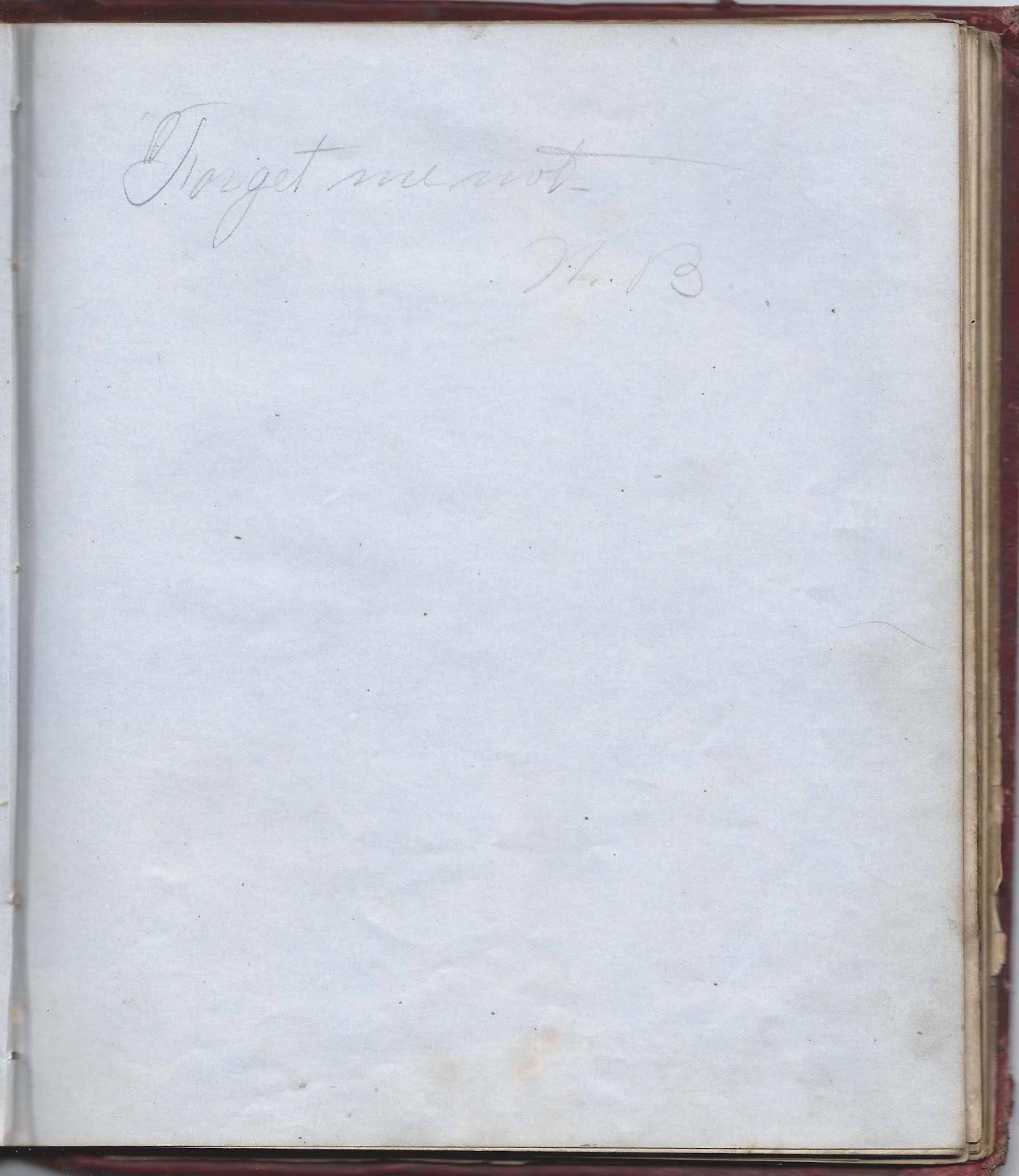 4)  Appears to be T. Fletcher G. of Allegheny City. 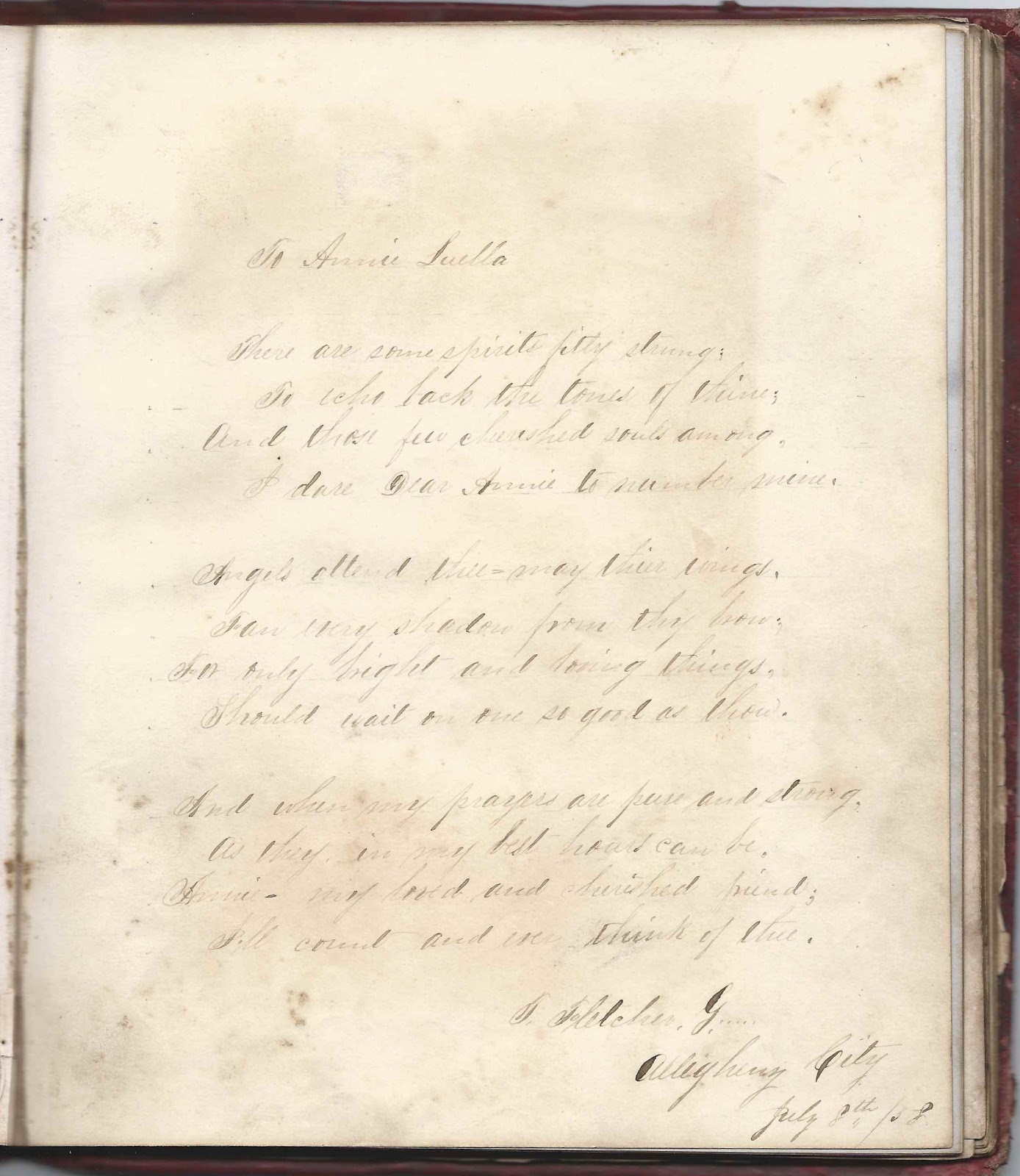 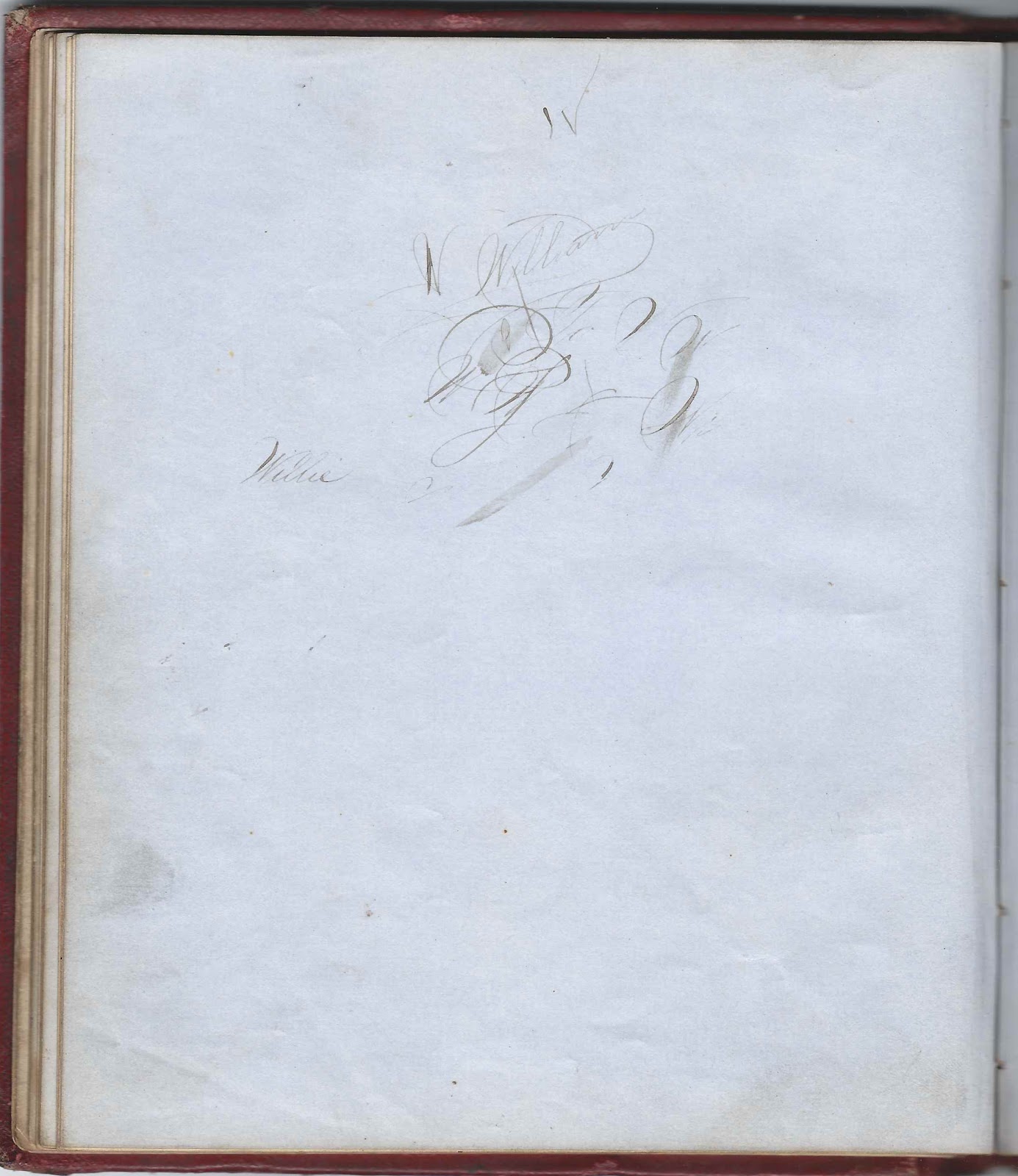 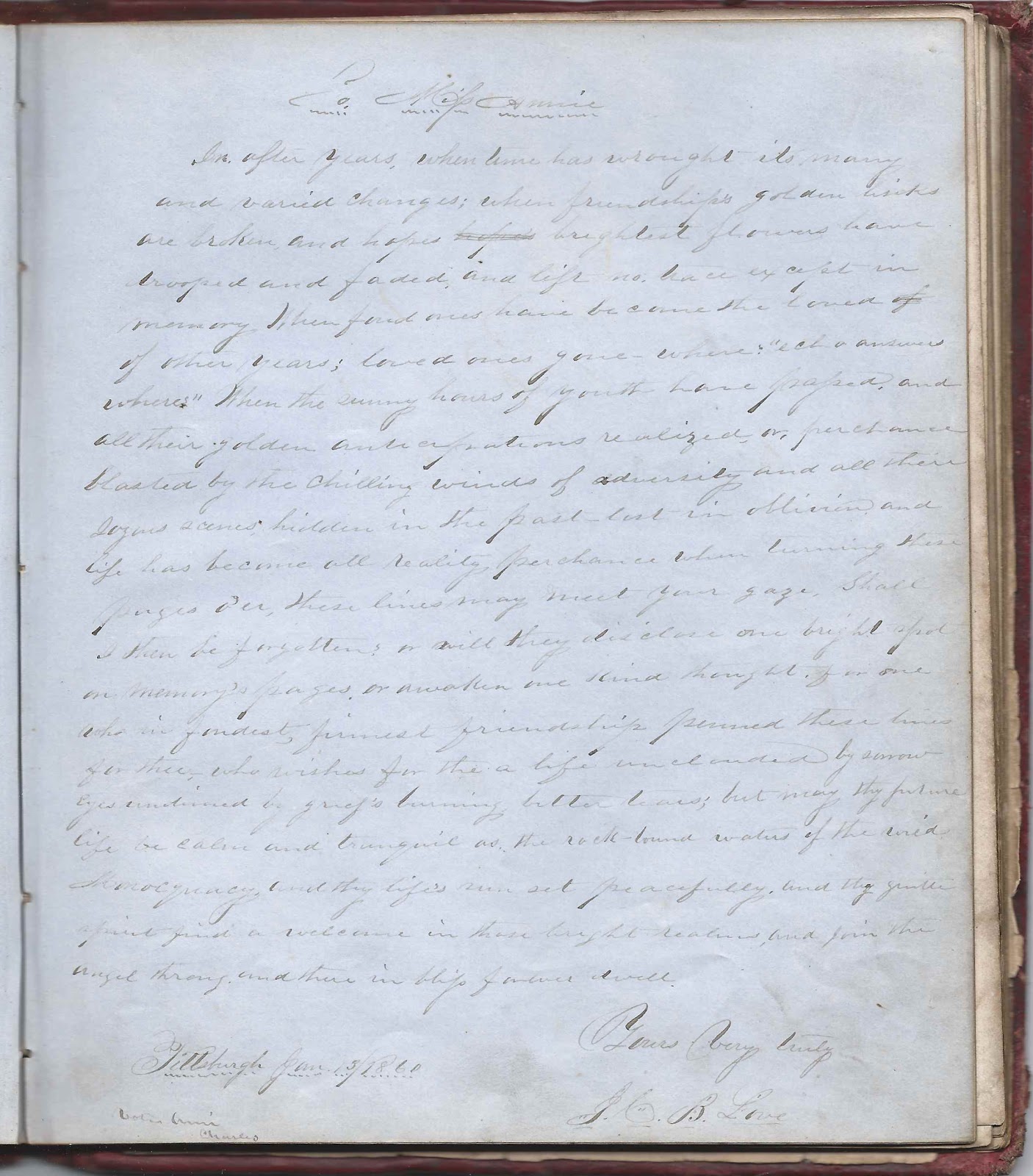 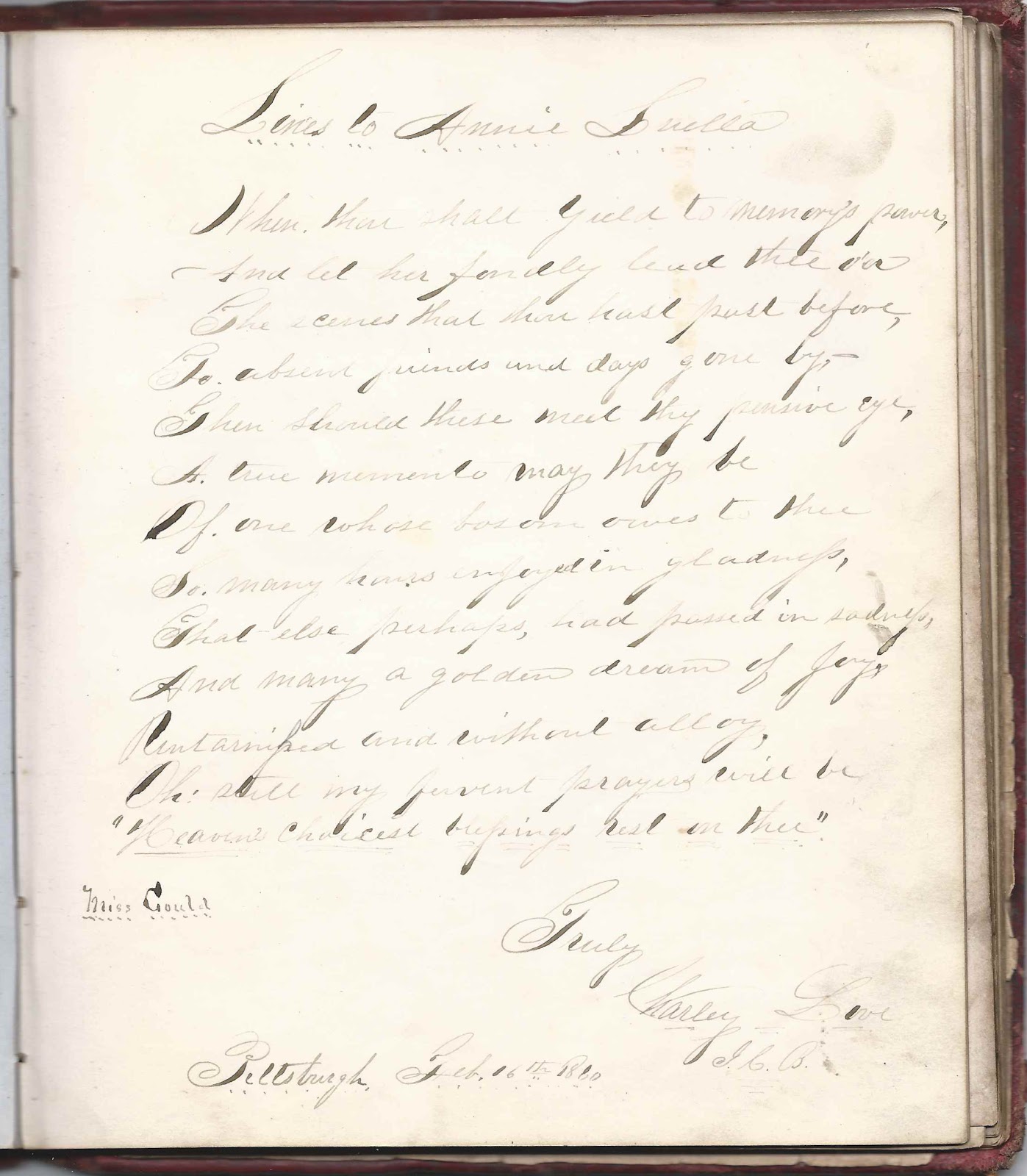 8)  Appears to be J. Calhoun B., signed at Pittsburgh, Pennsylvania; perhaps another Brunt? 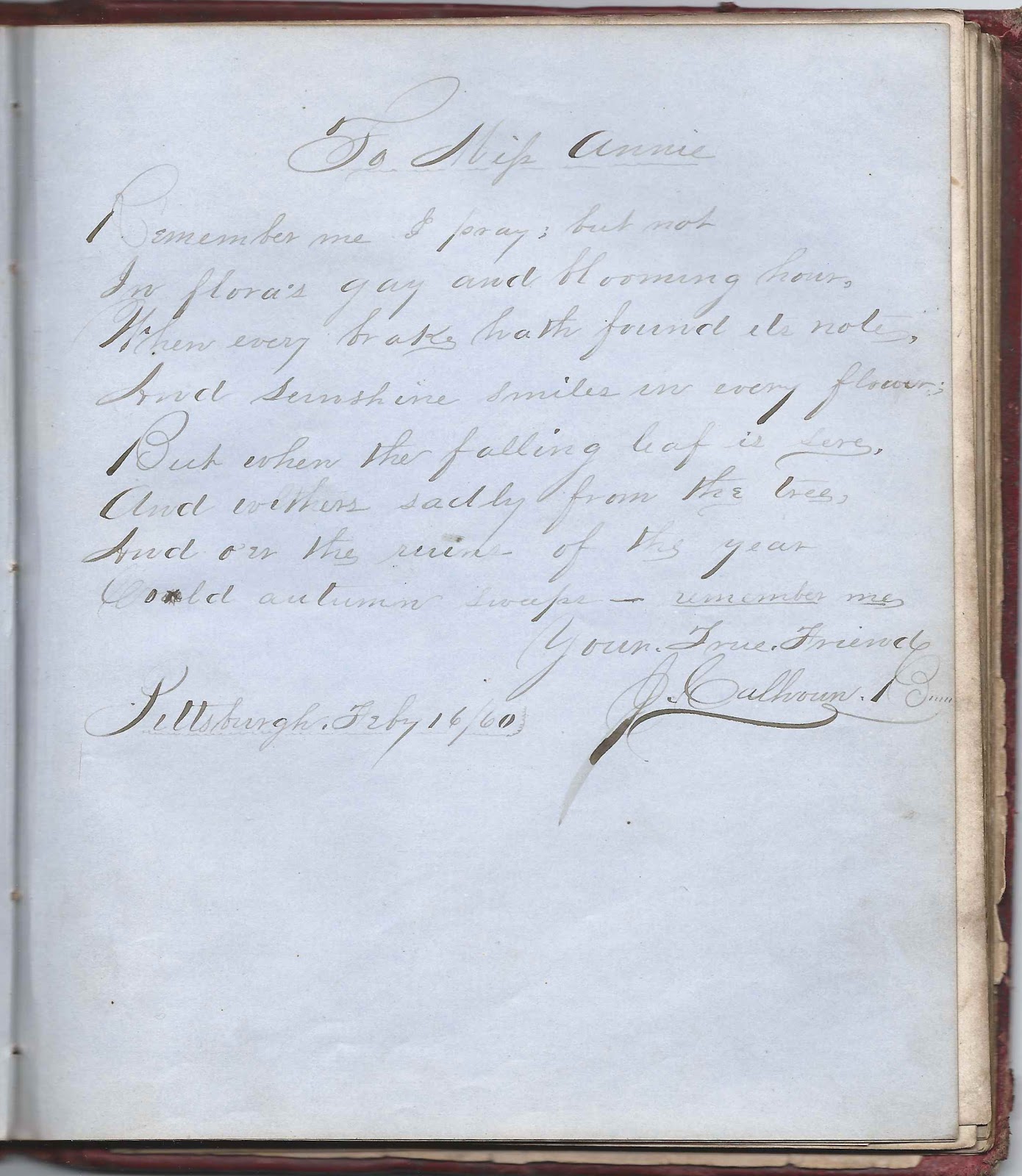 9)  Appears to be Jno. C. B., signed at Pittsburgh, Pennsylvania; perhaps another Brunt? 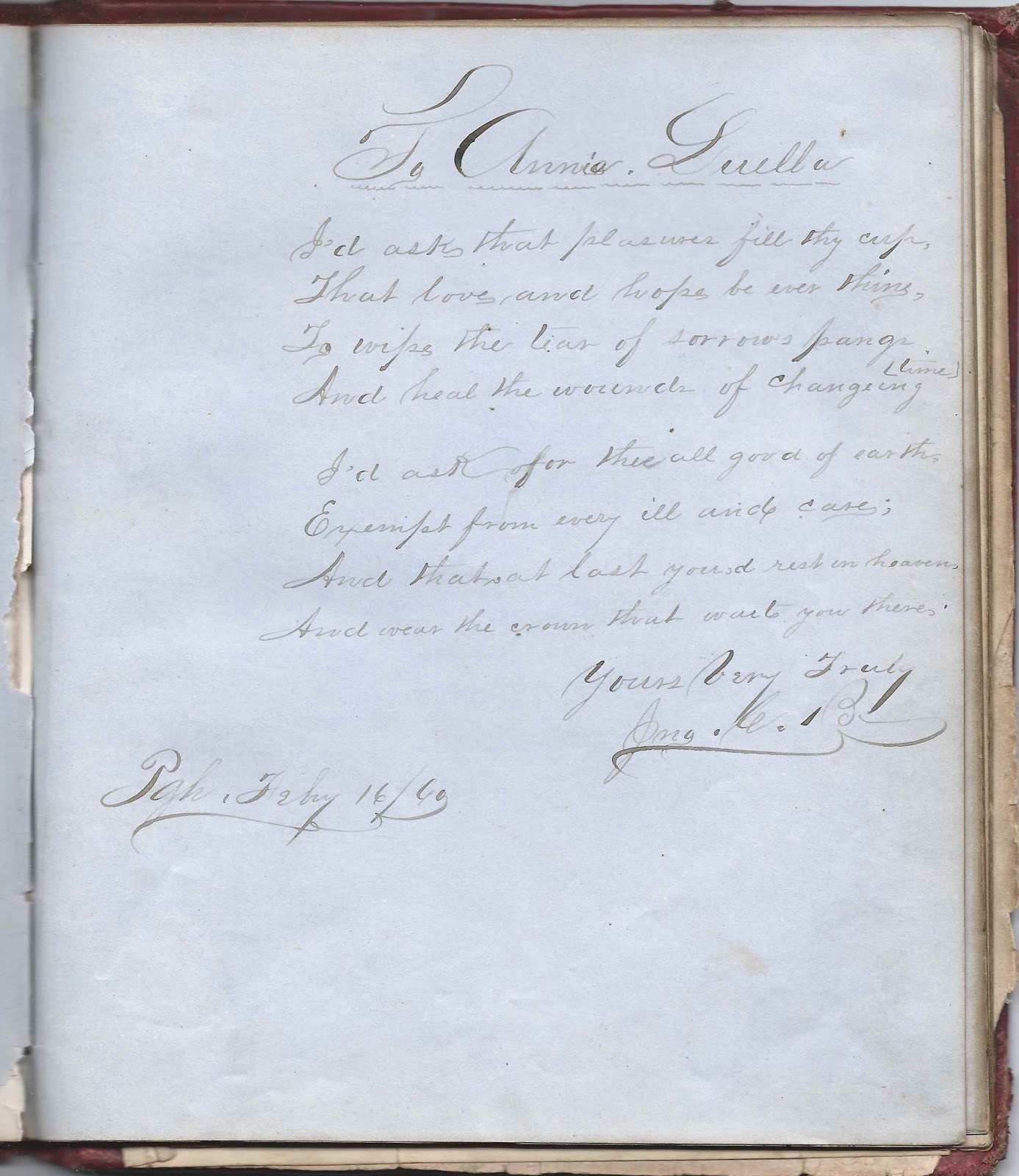 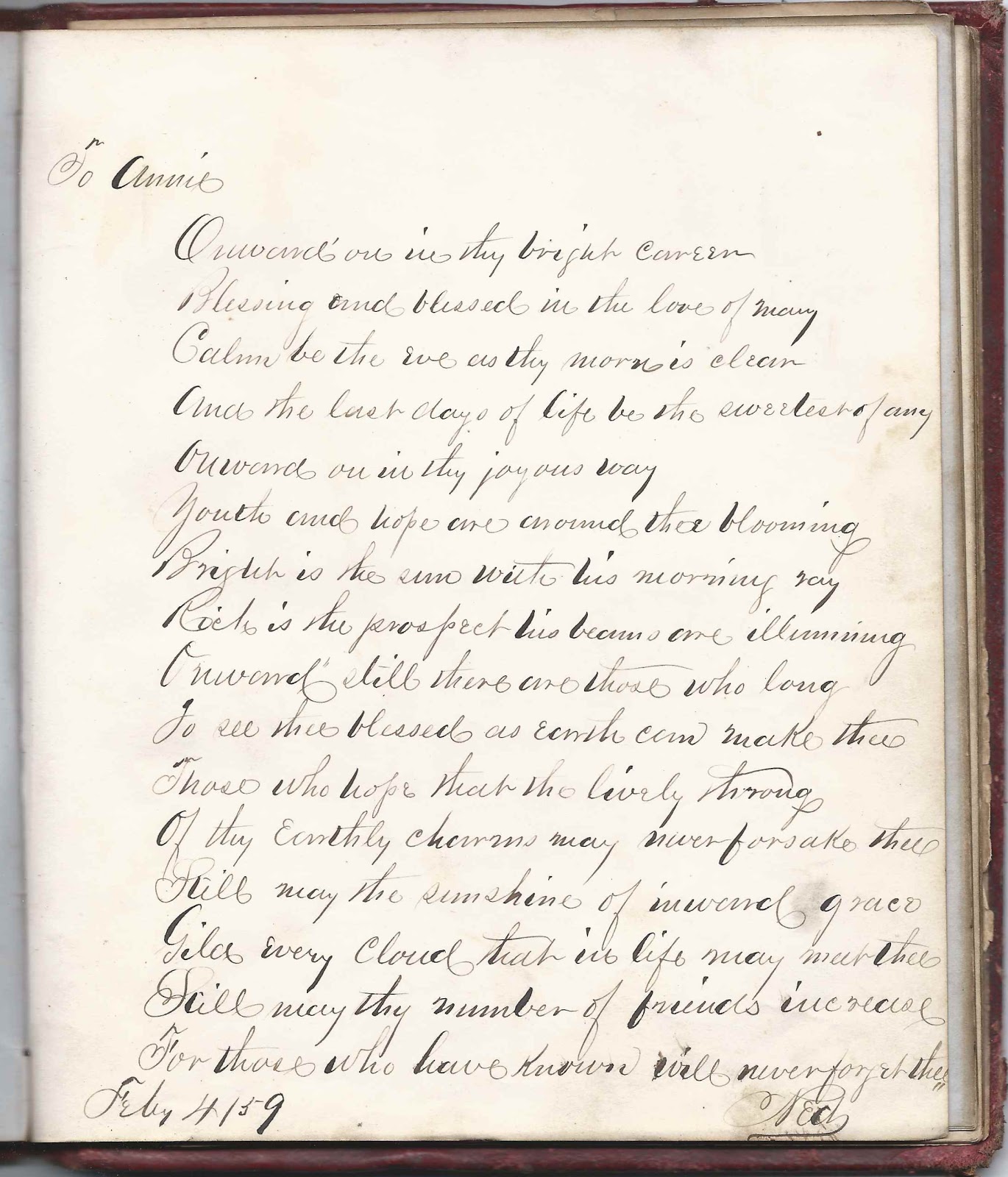 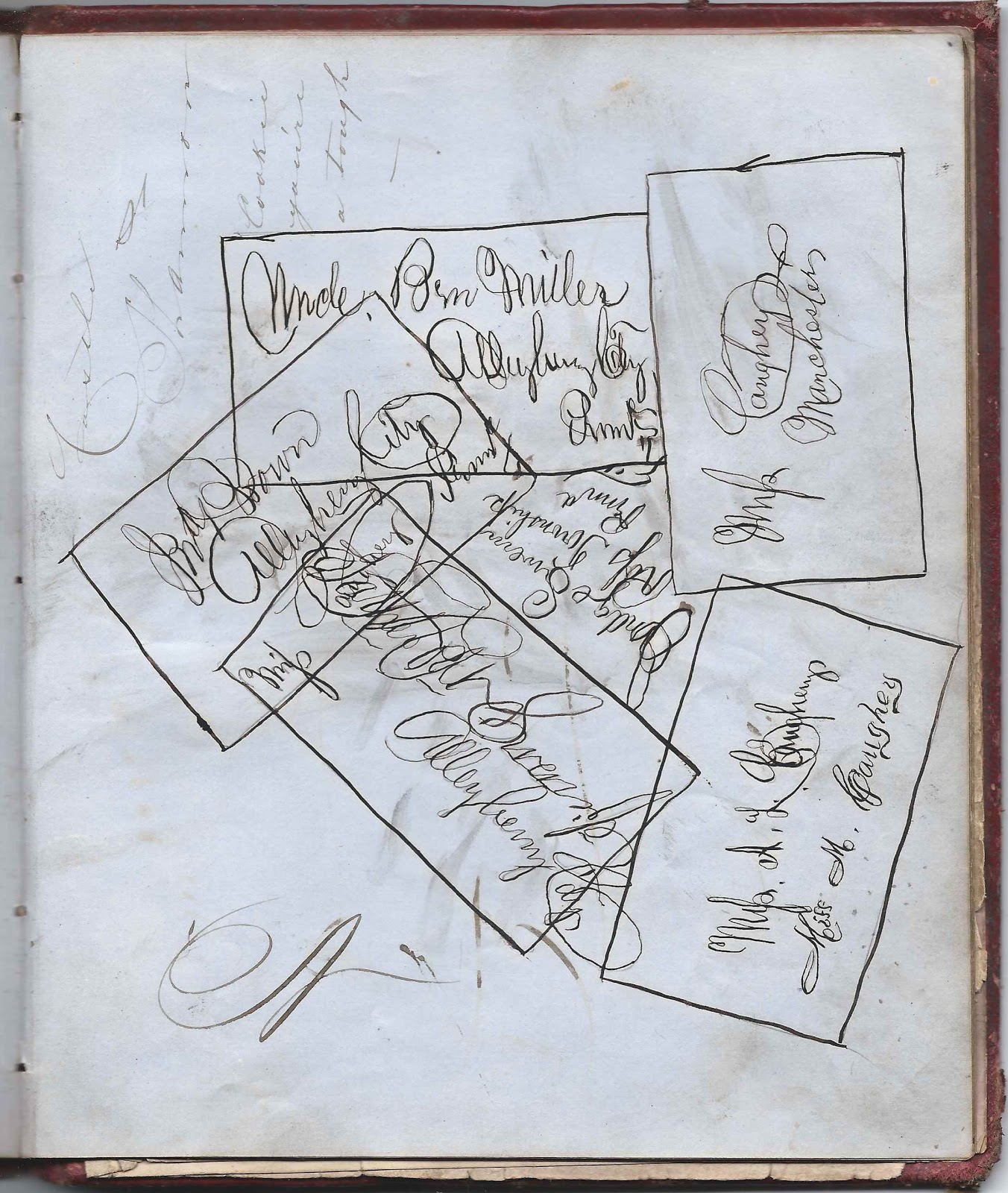 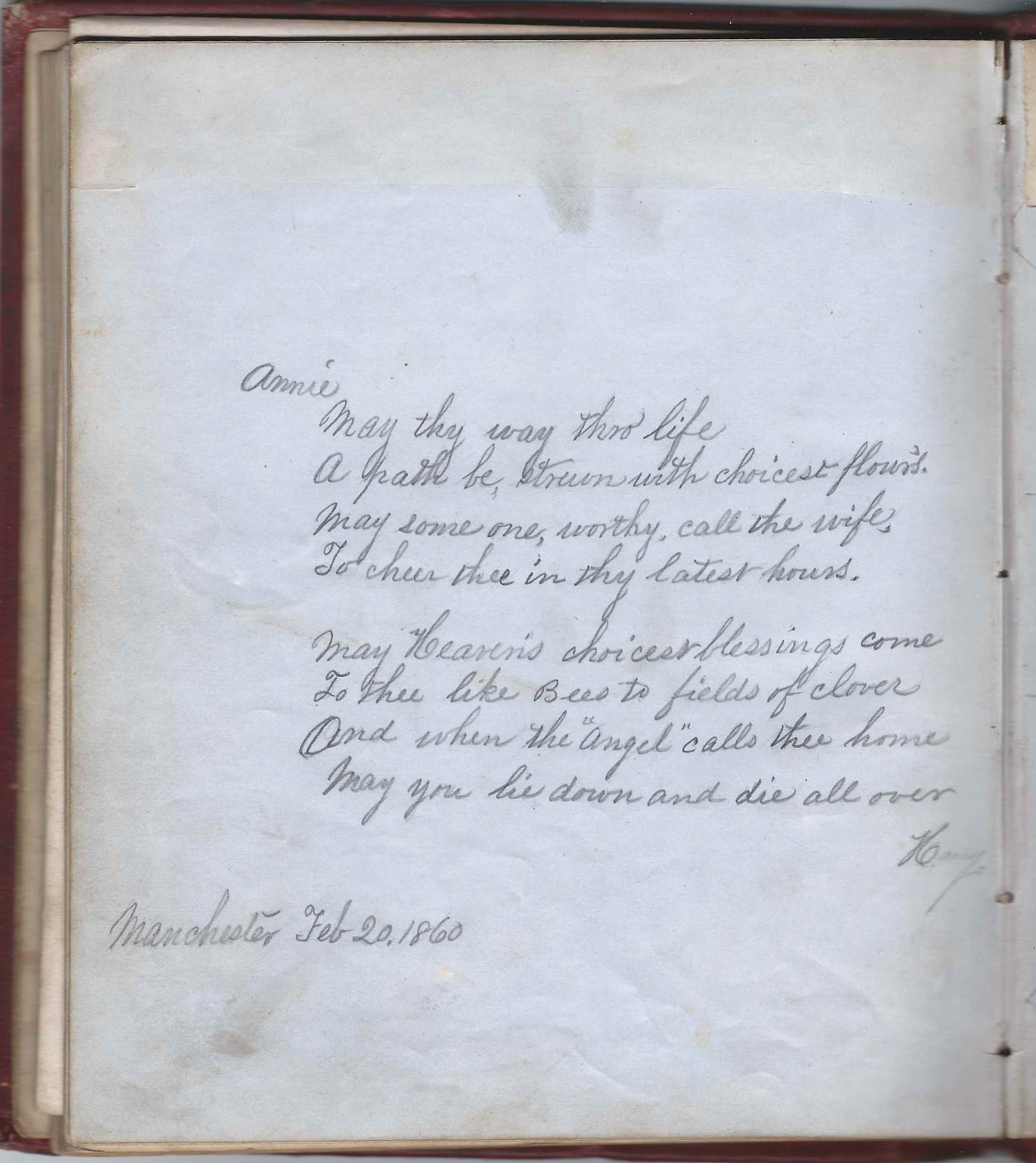 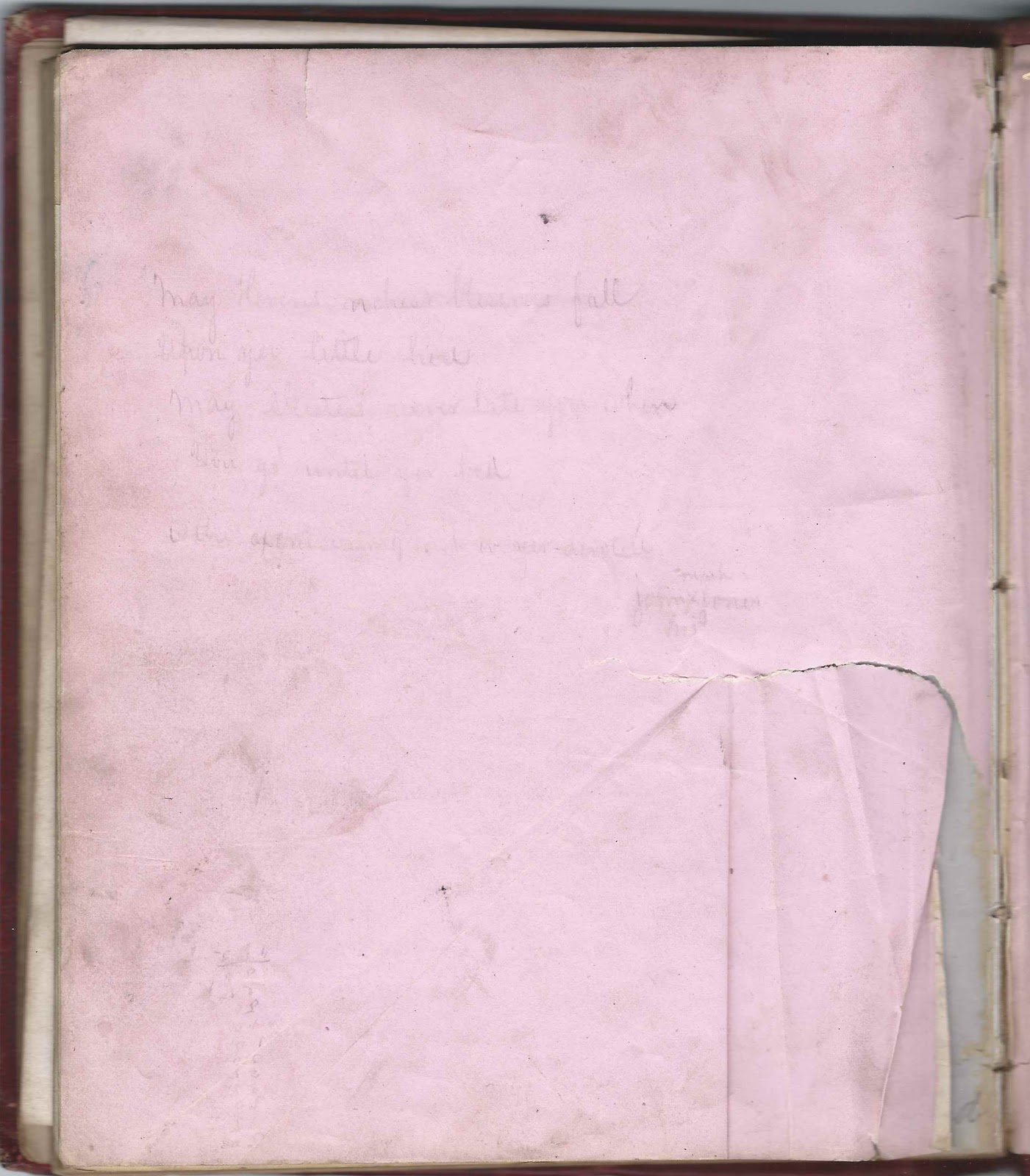 14)  Someone rubbed out most of the name, but it appears to end in "ter".  There's another page signed by a McAllister, in case that's a clue.  The signer lived in Allegheny County, Pennsylvania. 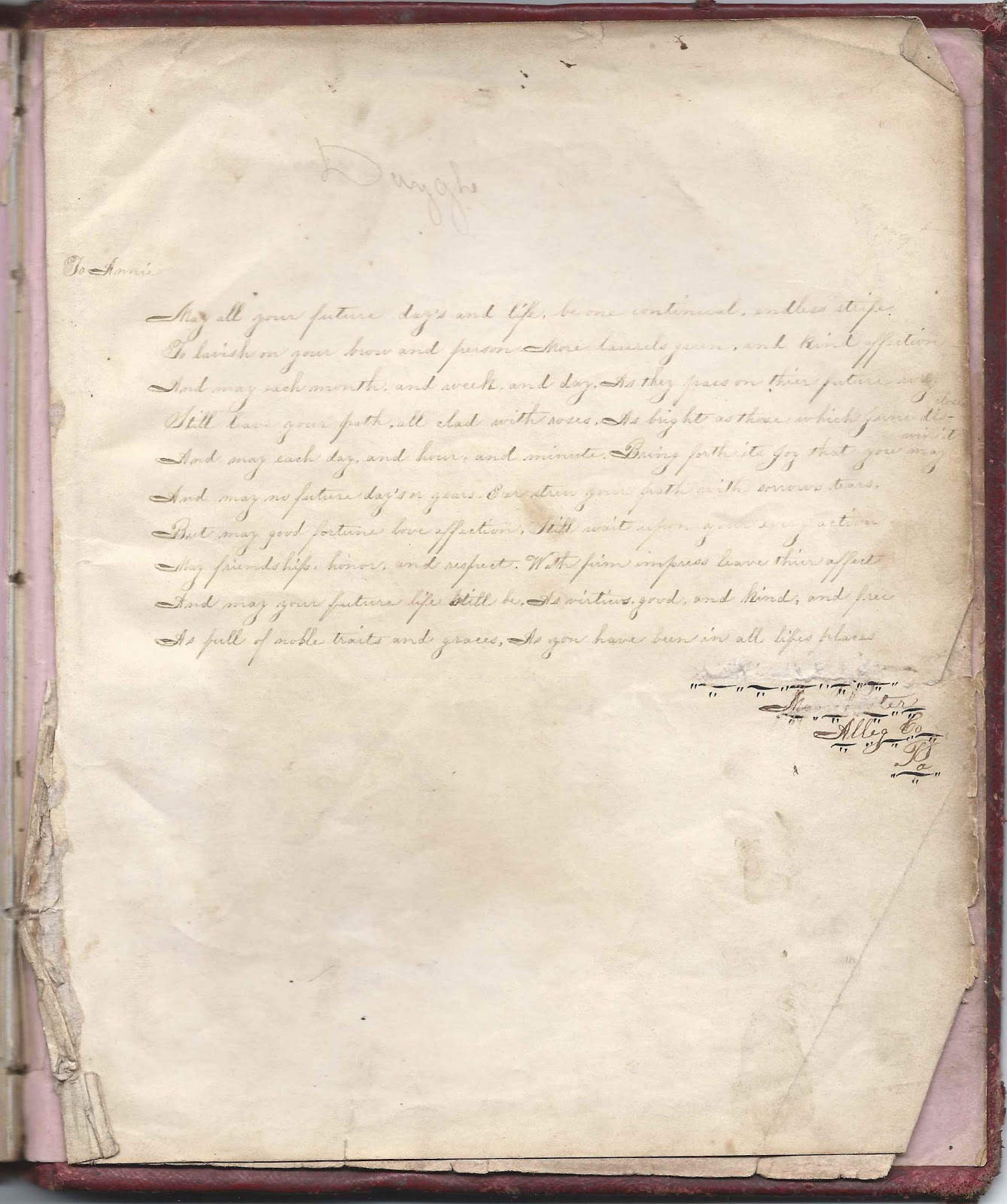 15)  Double page signed by Harry, who might be the same Harry as above. 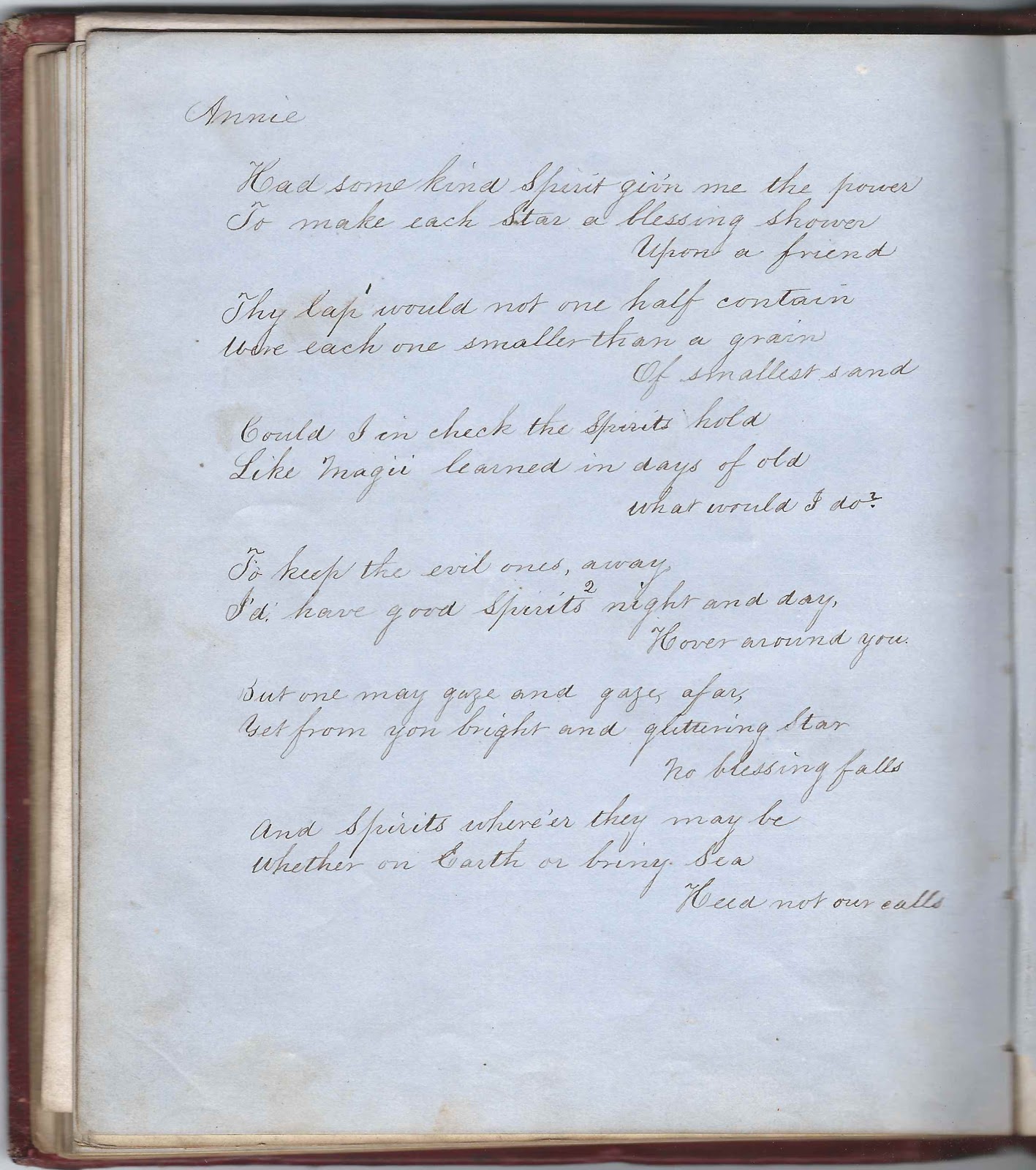 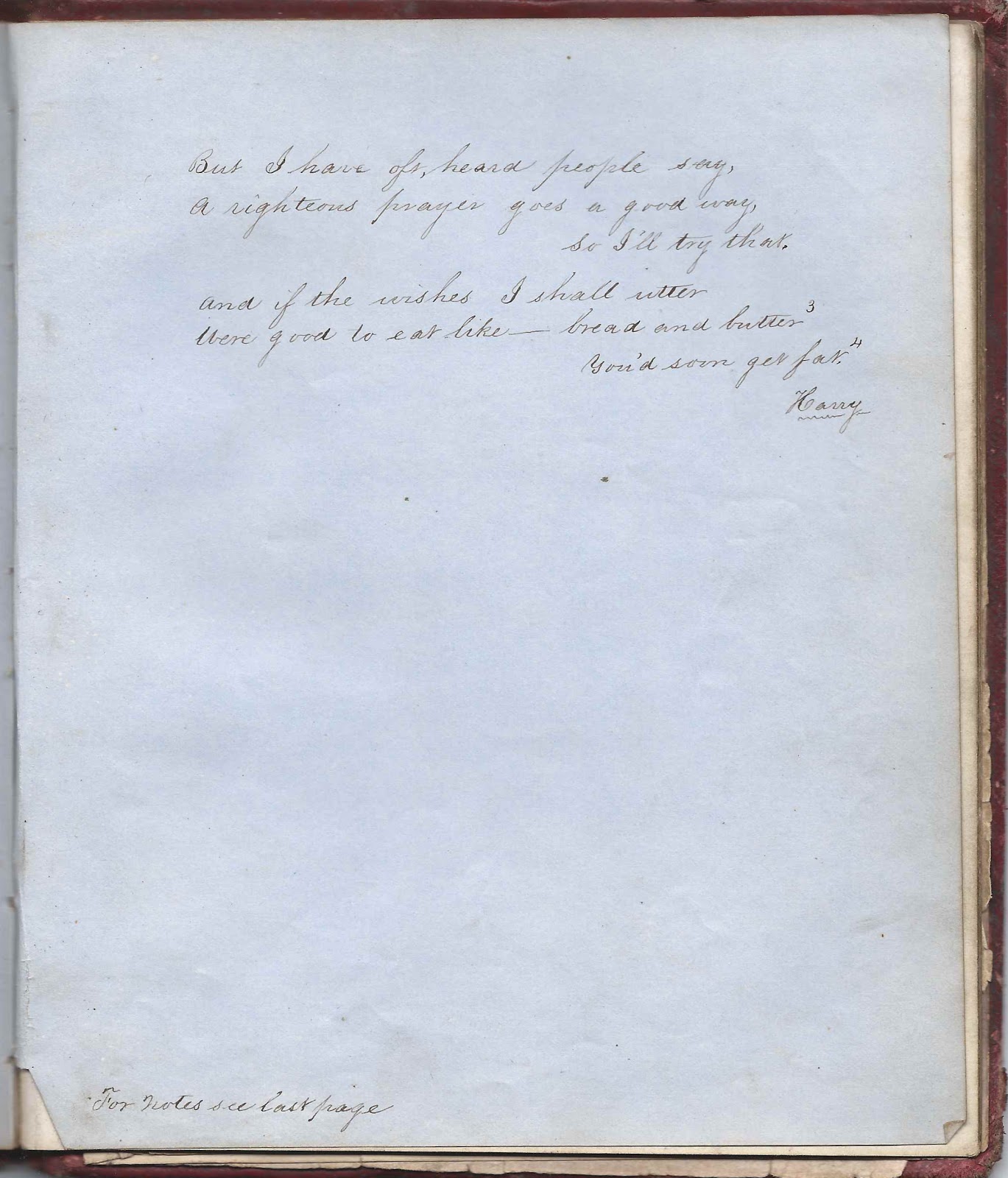 Surnames in the Album  [Some appear multiple times; many of the signers have undetermined surnames.]

Signers in the album  [Note: given names within a specific surname may not be in alphabetical order.  Also, if you feel that I've interpreted a surname incorrectly, please advise!] 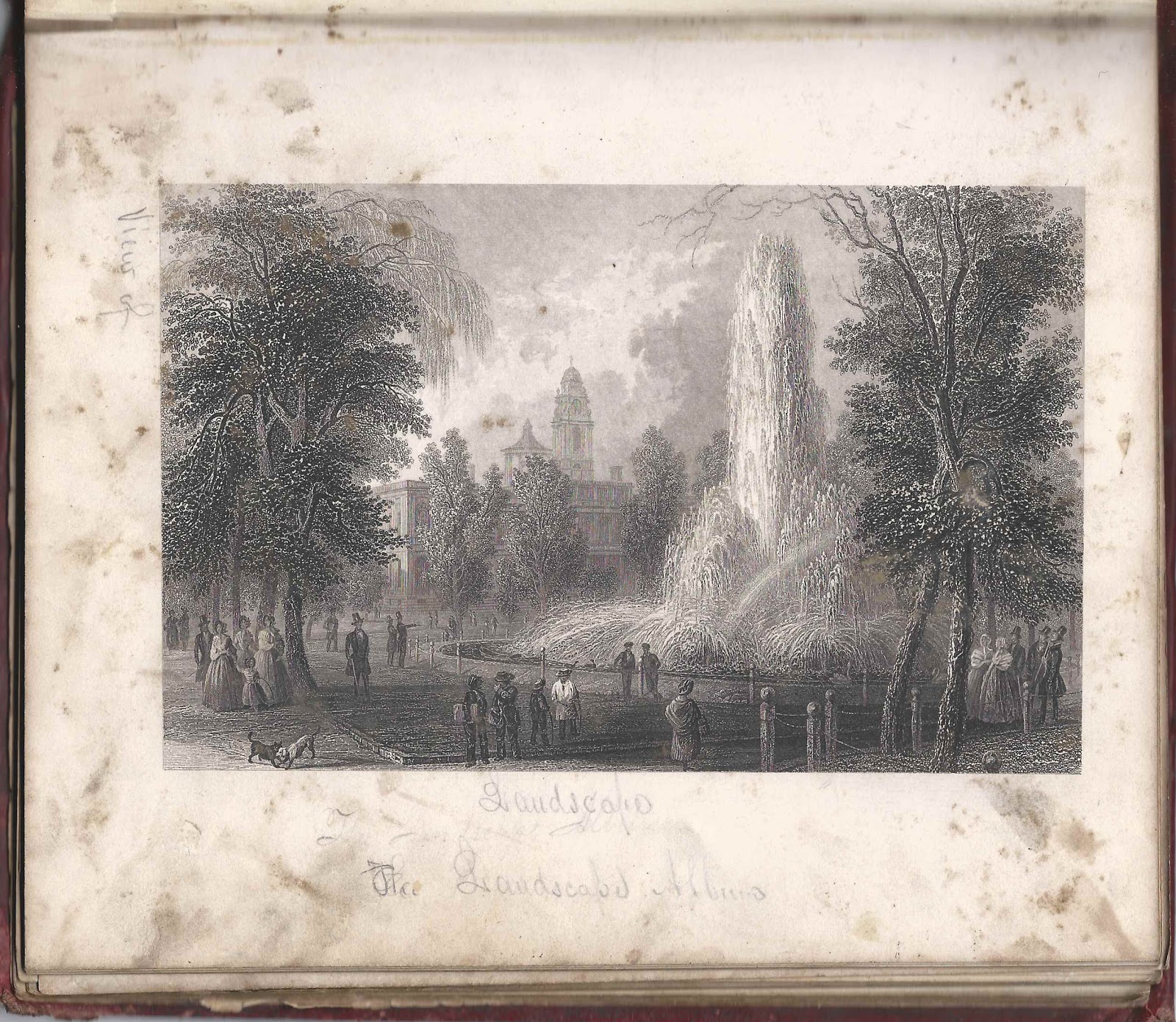 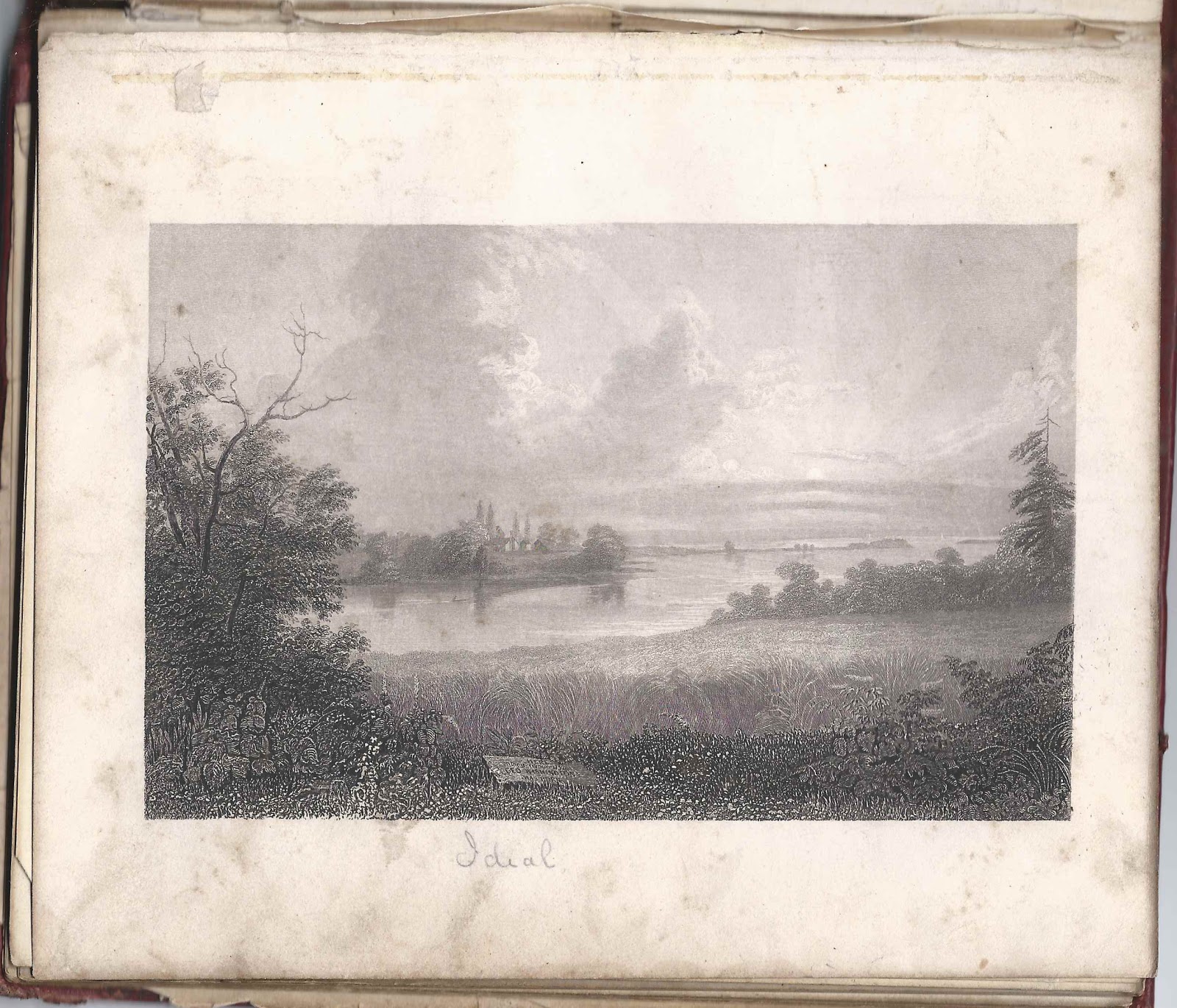 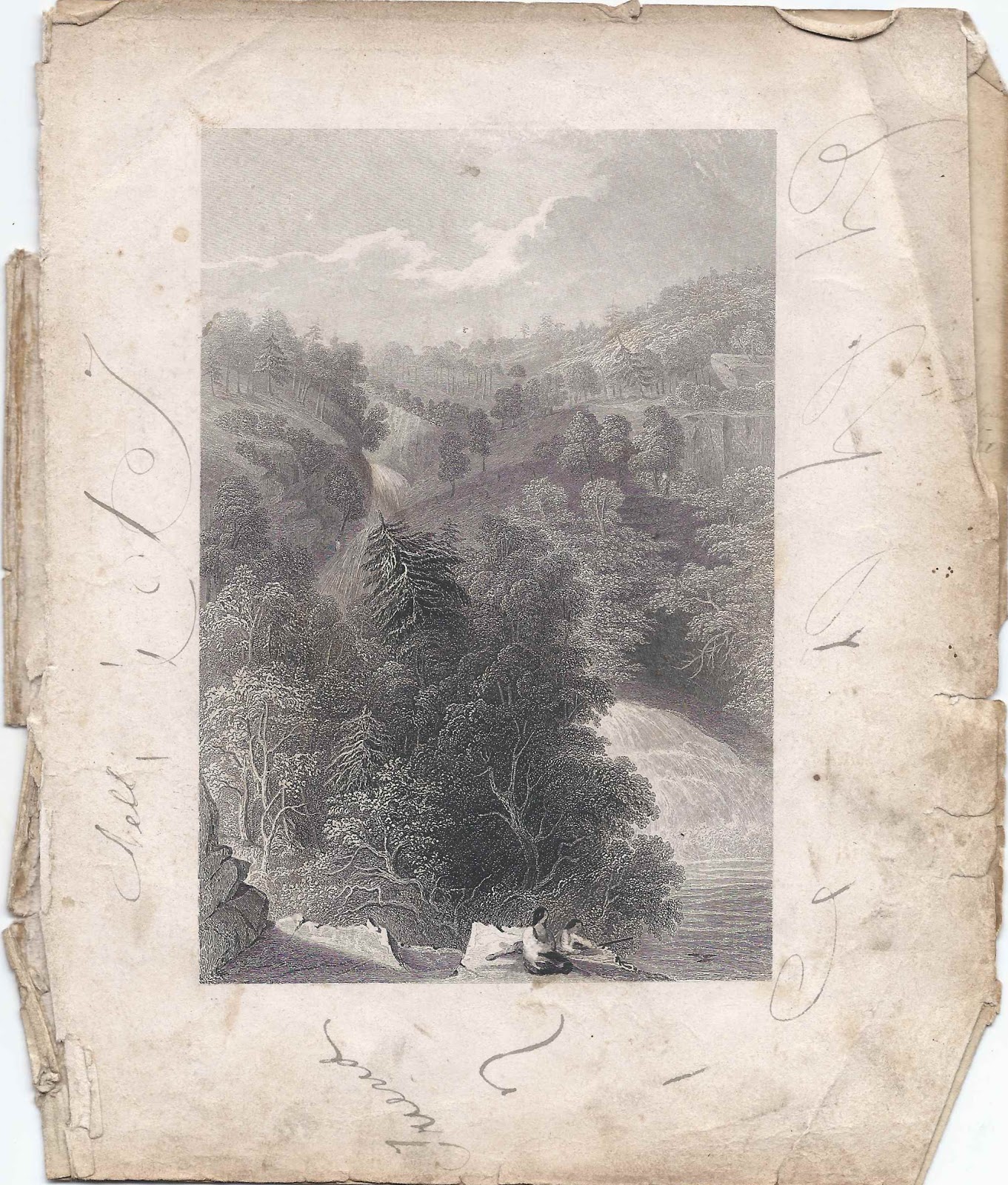