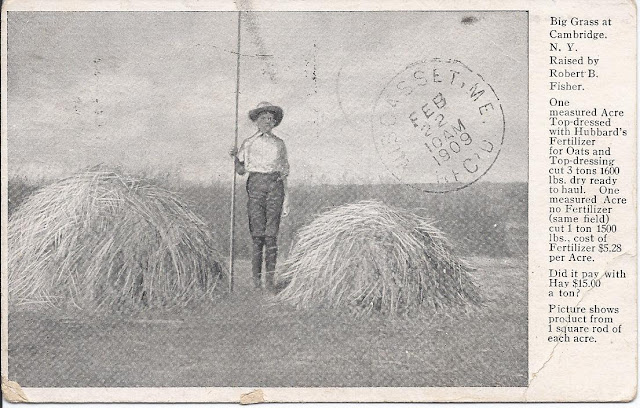 Postcard mailed in February 1909 showing the beneficial effects of Hubbard's Fertilizers of Middletown, Connecticut, on the grass crop at the Robert B. Fisher farm at Cambridge, New York.

I found a Robert Blair Fischer living at White Creek, New York, near Cambridge, in the 1900 Census.  He was born about December 1872 in New Jersey, son of David Wesley Fisher and wife Eliza.

Robert and Ethel operated a farm at White Creek and raised at least four children, three of whom were sons.

For the boy shown on the postcard to be a son of Robert Blair Fisher, the only plausible prospect was Robert W. Fisher, born about March 1896.  Alternatively, the boy could have been a farm hand or farm hand's son.

The postcard was addressed to a Charles H. Walker at Wiscasset, Maine.  I believe he would have been Charles Harrison Walker, born about October 1839 at Woolwich, Maine, son of John and Jane (Potter) Walker.  He died 13 May 1917, about 8 years after receipt of the postcard.

If you have any corrections or insights regarding the Fisher or Walker families, please leave a comment or contact me directly.