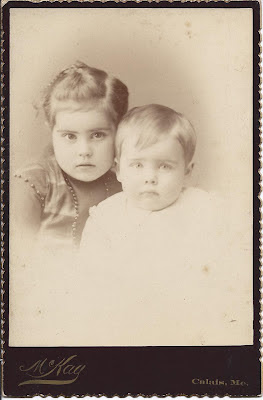 Using Census records and the names of the uncles to whom the photographs were inscribed, I'm guessing that the siblings are Helen and Harold Murchie of Calais.

The photograph above was inscribed to Uncle Alex, who might have been Alexander MacTavish, husband of the siblings' paternal aunt, Mary Adeline (Murchie) McTavish. 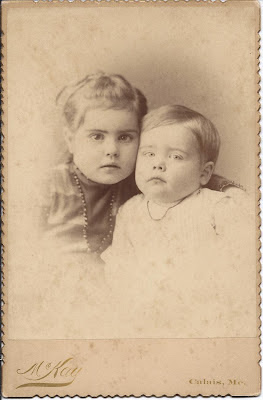 
Helen W. Murchie was born 1 March 1885 at Calais, Maine, the daughter of George Albert Murchie and Cora Hale (Harmon) Murchie, both Milltown, New Brunswick natives.  Milltown merged with the town of St. Stephen in the 1970s to become the municipality of St. Stephen.

Sadly, Helen died of diabetes on 2 July 1901.  [Ironically, Dr. Charles Best, co-discoverer of insulin in the 1920s, was born in West Pembroke, Maine, not far from Calais.]

He set up a law practice at Calais and later served in both houses of the Maine State Legislature and as Chief Justice of the Supreme Court of Maine.

On 15 October 1913, at Calais, he married Edith Jessie Ross, daughter of Henry Butler Ross and Lelia Miranda (Bridges) Ross.  She was born 23 March 1888 at St. Stephen, New Brunswick.  Her mother was a native of the aforementioned Pembroke, Maine.

If you have any corrections or insights regarding the Murchie or Harmon families, please leave a comment or contact me directly.