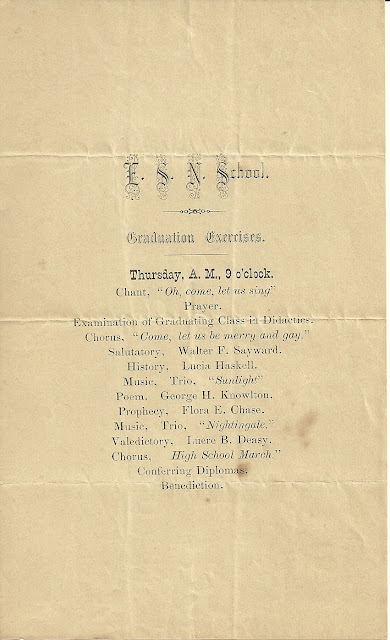 George Henry Haskell, noted in the above graduation exercises as the reader of a poem, was born about December 1856 at Sangerville, Maine, in Piscataquis County, the son of Henry and Lucinda Jane (Harlow) Knowlton.

An earlier post contained scanned pages of the graduation exercises program and the entire catalog of Eastern State Normal School in Castine, Maine, for the year ending June 3, 1881.  It contains names and home towns of the trustees, faculty and students, including George H. Knowlton.

Catherine S. (Foye) Knowlton died of a fractured skull on 26 August 1900.  The death record contained some wording that might have explained the death, but I couldn't make it out.

Her birth date was taken from a birth record, but most other records show her as the same age as George, who was born about 1856.  The birth record was a copy of an old record and could have contained an error.

George and Laura lived at Vassalboro, Maine.  They're in the 1910-1930 Censuses of Vassalboro, with George listed as a farmer.

If you have any corrections, additions or insights regarding any of the information presented here, please leave a comment or contact me directly.

A map of Sangerville, Maine:

Posted by Pam Beveridge at 2:31 PM