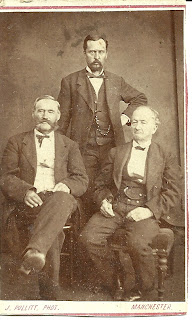 The men are C. H. Williams, J. L. Hosmer and a Mr. Wainwright, whose first initial I'm not sure of. 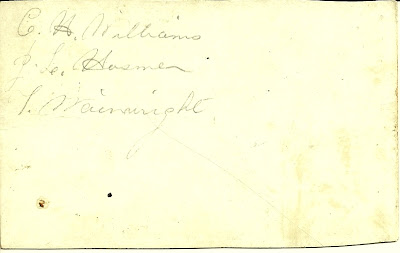 Nabby was Charles King Williams' second wife.  His first wife was her older sister, Phebe Emery, who died almost a year after their marriage, in October of 1818.  The sisters' parents were Joseph and Dorcas (Holt) Emery.

Charles H. Williams became a hard wares dealer in the Pembroke and Suncook area.   He married twice: 1) Arintha S. Greer, who died in 1858 and 2) Elizabeth G. Buss, whom he married on 10 March 1859.  In the 1860, 1870 and 1880 Censuses, Charles and second wife Elizabeth were living at Pembroke, New Hampshire.  No children were recorded with them.

I believe Charles and Elizabeth were living at Woburn, Massachusetts when the 1900 Census was enumerated.   I found Buss family members in New Hampshire and in Massachusetts, including Woburn, if that is a clue.

There was a business tie, and perhaps a family tie as well, that bound Charles H. Williams to another man in the CDV, J. L. Hosmer.

In the 1870 Census, J. L. Hosmer was living in the house of Charles H. Williams and his second wife Elizabeth at Pembroke, New Hampshire, along with Charles' father Charles K. Williams, by then age 81, and a woman enumerated as Sarah Bass Williams.  She could have been a later wife of Charles K. Williams.  Intriguingly, perhaps Sarah was a relative of Joseph Lawrence Hosmer's mother Annie (Bass) Hosmer.

Much of the following information comes from Genealogical and Family History of the State of New Hampshire, compiled by Ezra Stearns in 1908.

Joseph left New Hampshire for Indian Territory about 1885, where he worked in the cattle business in Kansas and Iowa for nearly a decade.  Whether or not his family went with him, I don't know.

Joseph returned to New England to work in the real estate business in Boston, Massachusetts, for seven years or so, before retiring to Manchester, New Hampshire in 1900.

As for Mr. Wainwright, I assume that he was another businessman of note in New Hampshire.  Hopefully a reader will recognize his face or name and provide the link between the three men, and, even better, his family history.

A map of Pembroke, New Hampshire:

Posted by Pam Beveridge at 5:03 PM