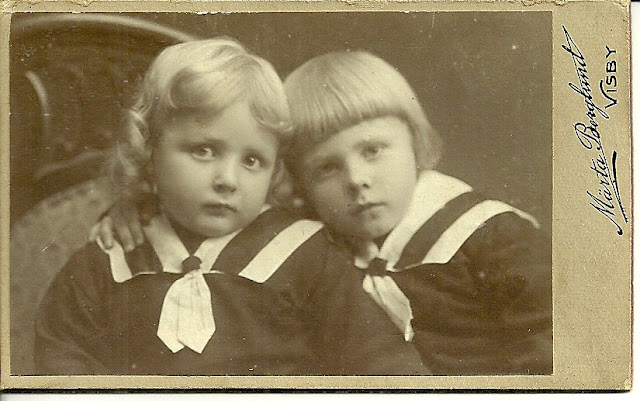 Photograph of adorable brothers identified as Otto Wilhelm Birch and Carl Erik Birch.  The photograph was taken by the studio of Marta Berglund of Visby.  I could find nothing about these boys online.

Using the Swedish word for Birch, however - Bjork - I found a reference to brothers, Otto Wilhelm Bjork and Karl Erik Bjork on a 1926 passage of the SS Drottningholm from Gothenburg to New York City.  The boys were with their mother Jenny, who indicated that she was widowed, that her mother was Johanna Stromberg from Sannas, Sweden, and that she was headed to Tomkinsville, New York.

Visby is on the island of Gotland on the opposite shore of Sweden from Sannas, but the family could have moved in the meantime.  Perhaps a reader will have an insight into whether the Bjork boys are in fact the Birch brothers. 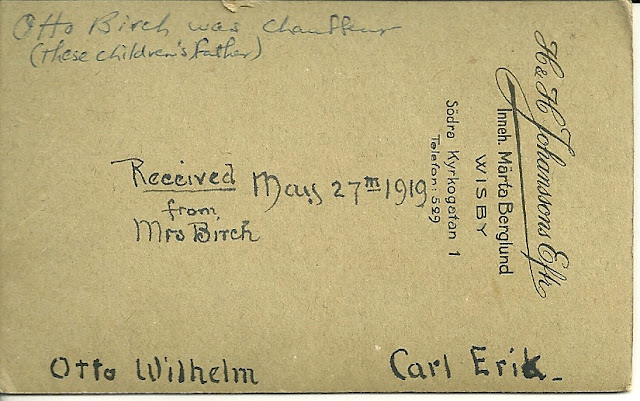 The boys' father, who gave his name as Carl Otto Birch, completed a World War I draft registration card on 31 May 1917 at Northampton, Massachusetts, while employed as a chauffeur by the Frank Lyman family of Northampton and Brooklyn, New York.  He indicated he was born on 2 February 1889 at Visby, Sweden, and was married with two children.

As the reverse of the photograph indicates, it was received by the Lyman family from Mrs. Birch on 27 May 1919, I'm assuming in a letter.

The Lymans were Frank Lyman and wife Florence Chapin (Moodey) Porter Lyman of Brooklyn, New York, and Northampton, Massachusetts.  Florence had previously been married to attorney Charles Wendell Porter, who died at their summer home in North Perry, Maine, in September of 1899 from what was termed an accidental discharge of his gun.  After Florence's marriage to Frank Lyman, the family continued summering at North Perry.

Perhaps the Birch boys and their mother had stayed at Visby while Carl Otto Birch went to the United States to work so that he could send money back home and/or save up for his family's passage.  Or perhaps the family was in North America all along.  Or perhaps it was not Carl Otto Birch's intention to settle in the United States but only to get a bit of a nest egg during what were difficult economic times at home.  Again, I hope a reader will be able to fill in the blanks.

I found a 1927 reference for a Carl Birch who entered the US at Buffalo, New York, from Ontario, in the hopes of finding work.  He gave his occupation as bricklayer, his date of birth as 1889 and his birthplace as Dalama, Sweden.  I'm inclined to think this is not our Carl Otto.  If it is, the boys on the Drottningholm were not our boys as their mother indicated she was a widow.

If you have any insights into the identity of the brothers, please leave a comment or contact me directly.  Thanks for stopping by!