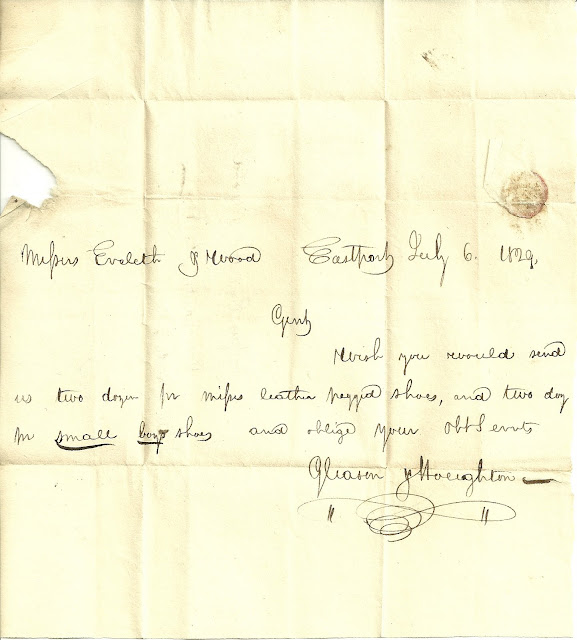 An 1829 business letter from the firm of Gleason and Houghton in Eastport, Maine, to Eveleth & Wood in Boston, Massachusetts, asking for a delivery of women's leather pegged shoes and small boys' shoes. 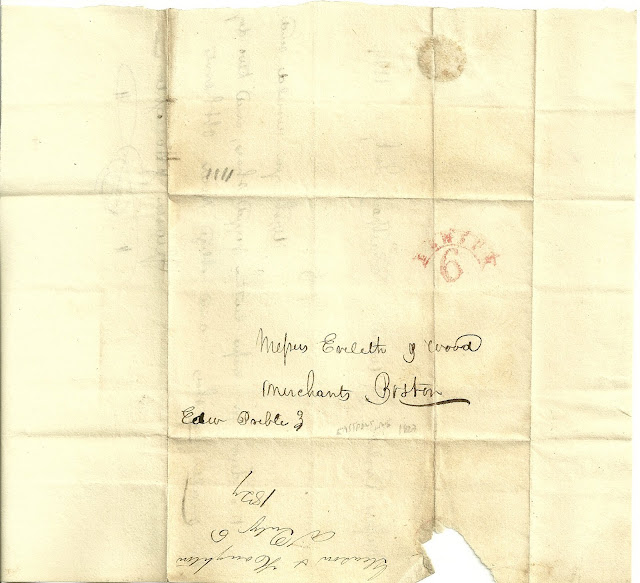 Gleason & Houghton was a partnership of Jesse Gleason and Partman Houghton.


Jesse Gleason was born 4 November 1789 at Framingham, Massachusetts, the son of Thomas and Hannah (Hill, I think) Gleason.  His paternal grandparents were Phineas and Elizabeth (Pierce) Gleason of Massachusetts.  I don't have information on Hannah's parents.


Although some online sources show a son Jesse for the couple, Jesse was actually their nephew, the son of John and Harriet (Gale, I think) Gleason, who settled in nearby Perry, Maine, where Gleason's Point is a favorite haunt, with its 180 degree bay views and wild strawberries in season.


Partman found his way to Eastport, Maine at a young age and became associated with Jesse Gleason.  On 25 June 1833 he married Olinda Ann Prince, born 19 October 1807 at Eastport, Maine, the daughter of Joseph and Sarah Prince.


Joseph and two of his children burned to death in a house fire on 24 February 1803 at Eastport.  Sarah, Olinda Ann and Joanna B. Gleason survived.  Joanna B. Gleason married Ebenezer Everett of Brunswick, Maine.  Their son Charles Carroll Everett was dean of faculty at Harvard Divinity School.


Partman Houghton served in the Maine State Legistlature, but he is probably most remembered today for a fund he set up for the benefit of elderly widows in Eastport, Maine.  I read somewhere that a particularly grim situation caused him to set up this fund, which is still operating today.

A map of Eastport, Maine:

Posted by Pam Beveridge at 4:12 PM