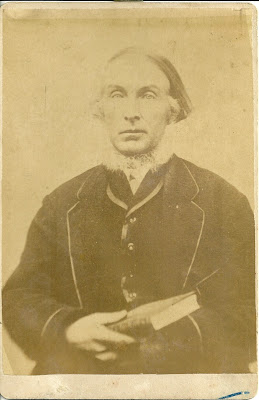 Cabinet photograph of an older man identified on reverse as "Grandpa Beattie, James Francis Beattie, Frank M. Beattie's pa".  The photograph was taken by the Whalen studio, perhaps the studio of Abel J. Whalen, who operated in several Michigan locations from 1862 to 1897. 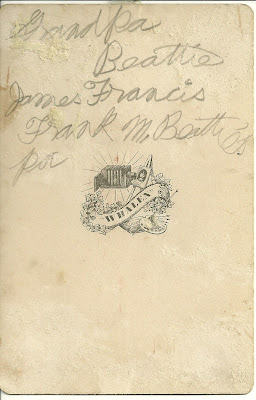 Note of September 27, 2015:  A reader has provided more information on Frank's wife Olive Myrtle Hale, which can be seen here.   The reader descends from Olive's first husband Frank Erwin Terwilliger, shown below in an image provided by the reader. 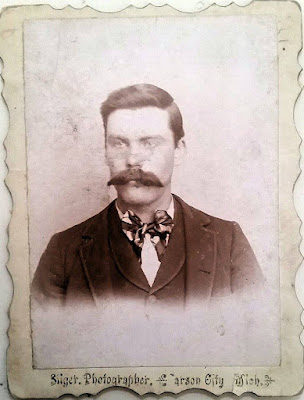 James Francis Beattie was born 21 January, 1824 at Newburg, New York, the son of Thomas Montgomery Beattie and wife Admira (Crist) Beattie, who were married at the Goodwill Church at Montgomery, New York on 12 February 1814.  They moved their family west about 1829 and eventually located in Ionia County, Michigan about 1838.

In 1847 at Keene Township in Ionia County, Michigan, James Francis Beattie married Drusilla Covert, also from a family that had moved from New York to Michigan. She was born 8 February 1831 at Jerusalem, New York, the daughter of Benjamin and Sabrina (Runyan) Covert, born in Virginia and New York respectively. The family settled in Keene Township in Ionia County, Michigan about 1845.

It would be interesting to determine the identity of the person who wrote the identification on the reverse of the photograph. I don't know if Frank M. Beattie had any children of his own, but he was a stepfather to the children of his ex-wife Olive Myrtle (Hale) who had two husbands before him, and one after. Perhaps he remained close to them.

His father James Francis Beattie had died before he would have known these children, but perhaps this photograph remained in Olive's possession.

If you have any corrections, additions or insights regarding any of the information provided here, please leave a comment or contact me directly.

Posted by Pam Beveridge at 8:16 AM