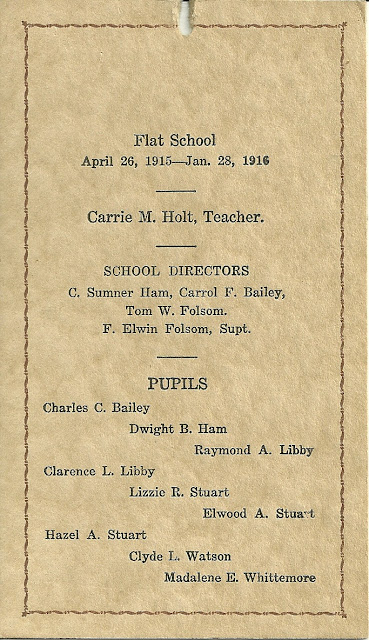 The teacher was Carrie M. Holt.  See another post that features a photograph of Carrie May Holt in a buckboard with her future husband Walter Glenwood Ring.


Carrie married Walter on 18 March 1916, not long after the end of the term indicated on this card. The earlier post contains some other items relating to Cambridge and Dexter, Maine.

Dwight B. Ham was born about 24 April 1903 in Maine, the son of Frank C. and Marcia Leola (Bailey) Ham.  Dwight married Elena B. Littlefield of Guilford, Maine, on 28 August 1926. She was born about 1900, the daughter of Sewell and Isabel (Smith) Littlefield. In the 1930 Census, the couple was living at Guilford, Maine. Dwight was working as a teamster at a lumber mill. There were no children listed with them. Dwight died in 1964 in New Hampshire.

Raymond A. Libby. I wasn't able to find out a Raymond A. Libby in Cambridge, Maine, though I did find a Libby family living there. Perhaps a reader has information about him and will leave a comment.

Clarence L. Libby. Again, I wasn't able to find out much about him, though it's possible he was the son of Leo and Gertrude Libby, who were all living at Foxcroft, Maine, in the 1920 Census. A Clarence L. Libby of Skowhegan married Della L. Witham of Oakland, Maine, on 3 July 1929.

The three Stuart siblings: Lizzie R. Stuart, Elwood A. Stuart and Hazel A. Stuart. Their parents were Harry Burton Stuart and wife Cora A. (Crockett) Stuart.

Elwood Alden Stuart was born 28 June 1902 at Cambridge, Maine. On 14 September 1929 at Cambridge, he married Verna Mae Bean, who was born 22 June 1914 at Cambridge, Maine, the daughter of Ray Earl Bean and wife Maggie May (Thurston) Bean. The couple was living at Cambridge, Maine, at the time of the 1930 Census. Elwood was a mechanic at an auto repair shop. There were no children living with them at that time, but it was early in their marriage. Elwood died in 1969 at Hartland, Maine.

Madalene E. Whittemore, possibly Madalene Bernice Whittemore, was born 20 October 1905 at Harmony, Maine, the daughter of Coney Elnathan Packard and Berle Whittemore.  Madalene's mother Berle married twice after Madalene was born, and she can be found in the Censuses listed under the surname of her stepfather of the time. On 15 August 1921 at Auburn, Maine, Madalene married Charles A. Deering, who was born about 1905, the son of Grover and Alma Inez (Chase) Deering. I lost track of them after that date.