Civil War era Carte de Visite of a woman identified as W. Maria Brewer.  She was Wealthy Maria (Hart) Hanson Brewer.  The photograph was taken by P. B. Marvin of the Addis Studio located on 308 Pennsylvania Avenue, between 9th and 10th Streets.

The $.03 stamp affixed to the reverse indicates that the photograph cost between from at least $.25 up to $.50.  The use of stamps was discontinued in 1865; therefore, the photograph was taken before her 1866 marriage to sea captain Cyrus Albert Brewer of Maine.

Cyrus, whose first wives were Mary (Tower) Coombs and Caroline Patten, was the son of Cyrus and Belinda (Brettun) Brewer.  Caroline Patten died at sea on October 29, 1865, according to a Patten Genealogy found online.   According to the information noted on the back of the painting mentioned below, Cyrus and Wealthy Maria married on March 21, 1866.

I wonder if Cyrus was Cyrus A. Brewer who was master of the Brig Charles Miller, which is mentioned as a vessel that traveled from Matanzas, Cuba, to Philadelphia, Pennsylvania, on May 24, 1864.  Among other mentions found online of Captain Brewer and the Brig Charles Miller, is a notice where they collided with the schooner N. Smith in 1850 off Chincoteague.

Maria was previously married to Noah Hanson, whom she married on June 13, 1849 at Brewer, Maine.  I wonder if he was the Noah Hanson of Levant, Maine, who graduated in the Medical Class of 1838 from Bowdoin College; or was the Justice of the Peace at Hampden, Maine, in 1843.

Interestingly, at the time of this research, a portrait of Wealthy Maria (Hart) Hanson Brewer, by Maria's stepdaughter, Elizabeth Brewer Fisher, is listed for sale on the auction site eBay.  Perhaps it's still available by the time you are reading this.

The reverse of the painting has information, including Maria's date and place of death, February 4, 1899 at Washington, D.C.  Click on an image to enlarge it. 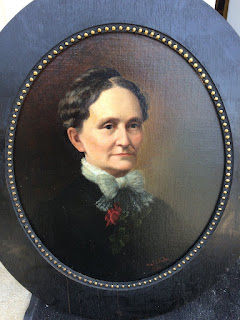 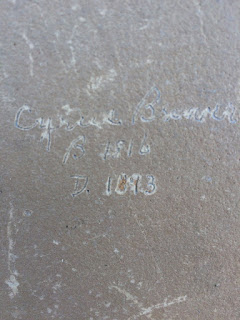 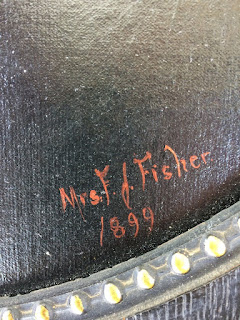 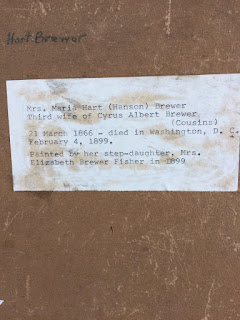