1850 letter from Isaac Farrar of Bangor, Maine, to John Thomas of Brownville, Maine 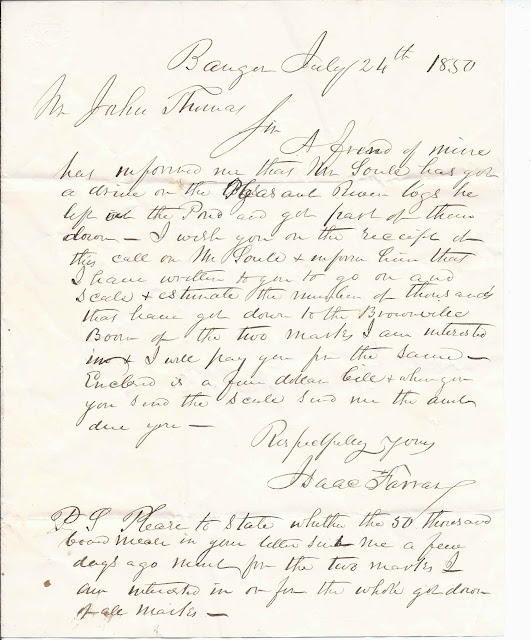 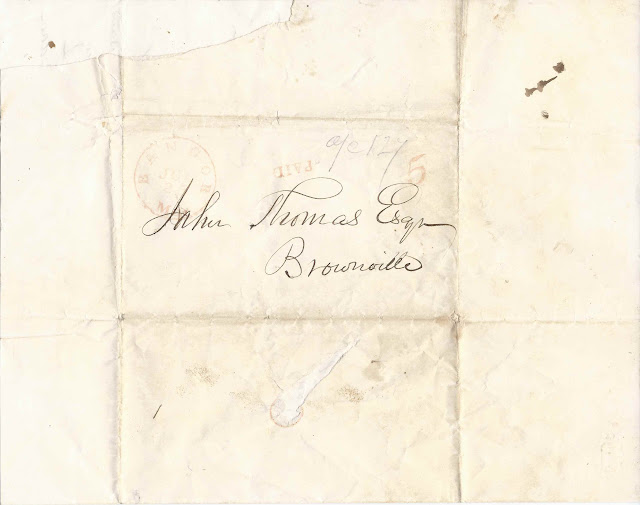 I'm assuming the writer is the Isaac Farrar whose mansion, designed by Richard Upjohn in the 1830s, later became home to the Northern Conservatory of Music and is now the headquarters of the Bangor Y.

Bangor, July 24th 1850
Mr. John Thomas
Sir,
A friend of mine has informed me that Mr. Soule has got a drive on the Pleasant River, logs he left at the Pond, and got part of them down.  I wish you on the receipt of this call on Mr. Soule and inform him that I have written to you to go on and scale and estimate the number of thousands that have got down to the Brownville  Boom.  Of the two marks, I am interested in, I will pay you for the same.  Enclosed is a five dollar bill and when you send the scale send the amount due you.
Respectfully yours,
Isaac Farrar
P.S. Please to state whether the 50 thousand board __ in your letter sent me a few days ago meant for the two marks I am interested in or for the whole got down of all marks.

Isaac Farrar was born about 1798 in New Hampshire, son of Jonathan and Hannah (Cram) Farrar.  Jonathan and Hannah brought their family from Meredith, New Hampshire, to Maine, first to Bath, then to Skowhegan/Bloomfield and, in 1817, to Dexter, where Jonathan operated several mills, including a sawmill, gristmill, tannery and woolen mill.  He also ran a store and was the postmaster.

By at least 1840, they were living at Bangor, where they had, I believe, four children:


Isaac Farrar died about 1860.  Some online sources have his widow Caroline dying at Florence, Italy, on 12 December 1872.

John Thomas, assuming I have the correct person, was born about September 1793 at Sidney, Maine, son of Ichabod and Mehitable (Crosby) Thomas.

If you have corrections to the information above, or more information on the Farrar and Thomas families, please leave a comment or contact me directly.  Thanks!