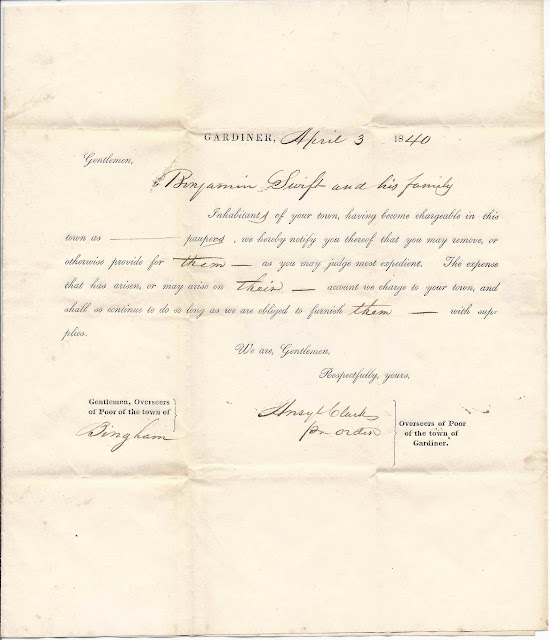 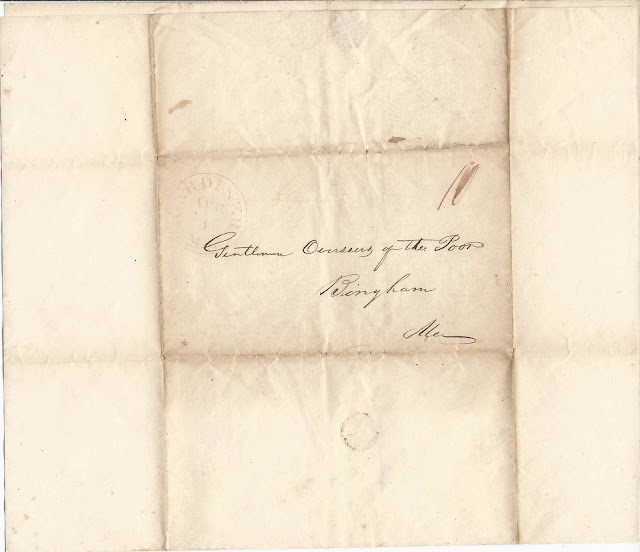 Gardiner, April 3, 1840
Gentlemen,
Benjamin Swift and his family, Inhabitants of your town, having become chargeable in this town as paupers, we hereby notify you thereof that you may remove, or otherwise provide for them - as you may judge most expedient.  The expense that has arisen, or may arise on their account we charge to your town, and shall so continue to do so long as we are obliged to furnish them with supplies.

It's distressing to think of this family having been destitute over a Maine winter.  They would have traveled down the Kennebec River to Gardiner, where hopefully they were able to get on their feet.

Ansyl L. Clark was then the clerk of the town of Gardiner, Maine.  He was born 15 September 1788 at Middletown, Connecticut, the son of Hanson and Sally (Lord) Clark, who moved to Maine after his birth.  He married Sarah Simms Gay, daughter of Asa and Elizabeth (Simms) Gay.  Ansyl L. Clark died 26 July 1870.

The 1840 Census of Gardiner, Maine, shows a family headed by a Benjamin Swift, with seven people in the household, but I have no way of knowing if this is the family named in the document.

I'm not sure if the Benjamin Swift(s) I found in Maine in the 1850 and 1860 Censuses was the Benjamin Swift named in the document either.  Interestingly, though, I found a Benjamin Swift residing in the household of Nathan and Clementine Houghton in the 1870 Census of Bingham, Maine and working as a farm laborer.  This Benjamin Smith would have been born about 1816 in Maine.

He may have been the Benjamin Smith listed in the 1880 Census of Moscow, Maine, a town abutting Bingham, where he was boarding with the family of Josiah and Lizzie Goodrich and working as a joiner.

On Find-a-Grave, there's a listing for a Benjamin Smith who died 6 December 1882 at age 67 and is buried at Bingham.

If you have information on the families of Ansyl Clark or Benjamin Swift, please leave a comment or contact me directly.  Thanks!

Bingham, Maine, and down the Kennebec River to Gardiner, Maine