1862 Certificate that Charles O. Emerson be Appointed Justice of the Peace for York County, Maine 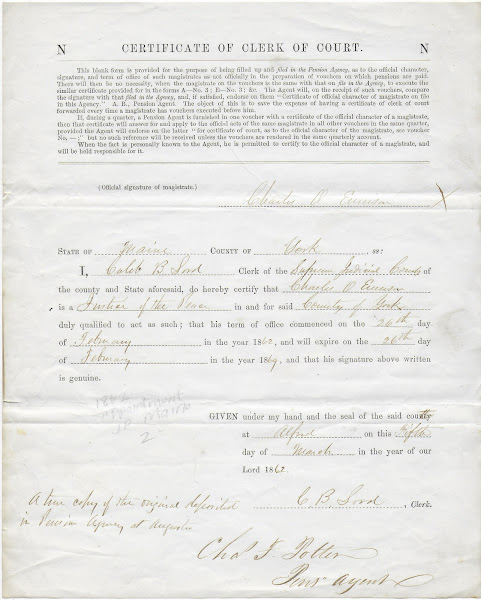 1862 document certifying that Charles O. Emerson be appointed a Justice of the Peace for York County, Maine. Signed by Caleb B. Lord, Clerk of the Supreme Judicial Court of York County.
The form also bears the signature of Charles F. Potter, Pension Agent, and it seems, from text at the top of the form, that Charles O. Emerson would be working as a magistrate on pension matters.
Charles O. Emerson - presumably Charles Octavius Emerson (1799-1863) of York, Maine - who was not long into this term as Justice of the Peace when he died; his FindaGrave memorial contains a short biography and linked relatives
Caleb B. Lord - presumably Caleb B. Lord (1819-1885) of Alfred, Maine
Charles F. Potter - Charles Fox Potter (1821-1867) of Augusta, Maine - Page 54 of A history of that part of the Fox family descended from Thomas Fox of Cambridge, Mass. : with genealogical records notes that Charles was removed from his position as pension agent by Andrew Johnson in 1866 - would love to get to the bottom of that story...
Posted by Pam Beveridge at 1:45 PM