Links to the months of December 1876 and October 1876 appear here and at the end of this post. 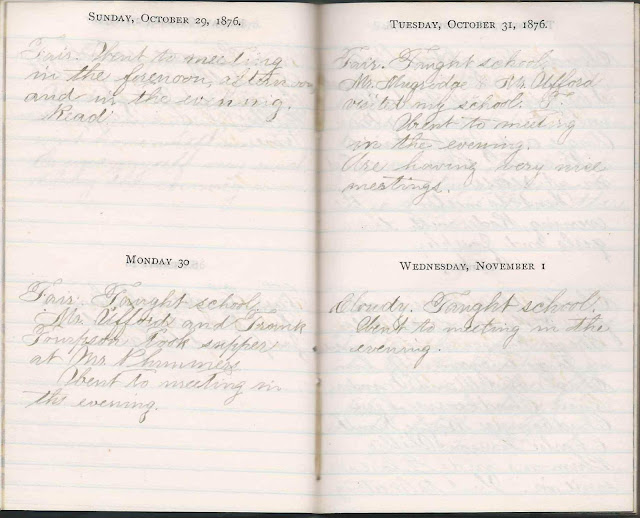 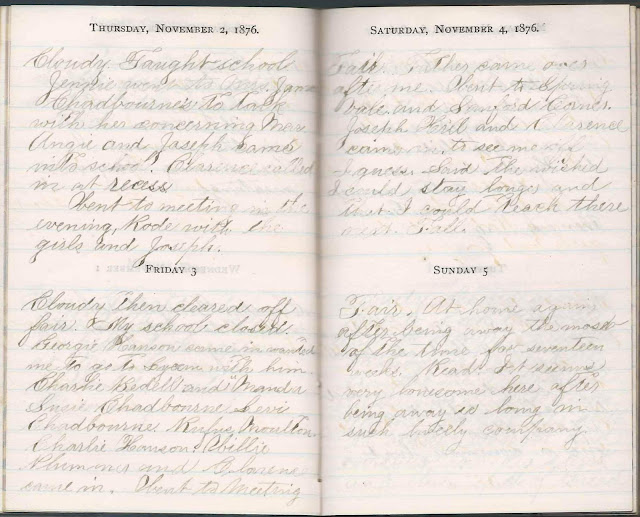 Thursday, November 2, 1876:  Cloudy. Taught school. Jennie went to Mrs. Jane Chadbourne's to talk with her concerning Mar. Angie and Joseph came into school. Clarence called in at recess.  Went to meeting in the evening. Rode with the girls and Joseph.

Friday, November 3, 1876:  Cloudy, then cleared off fair.  My school closed. Georgie Hanson came in, wanted me to go to Lyman [?] with him. Charlie Bedell and "Manda Susie Chadbourne, Levi Chadbourne, Rufus Moulton, Charlie Hanson, Willie Plummer and Clarence came in. Went to meeting.

Saturday, November 4, 1876:  Fair. Father came over after me. Went to Springvale and Sanford Corner. Joseph Hill and Clarence came in to see me off, I guess.  Said they wished I could stay longer and that I could teach there next Fall.

Sunday, November 5, 1876:  Fair. At home again after being away the most of the time for seventeen weeks.  Read. It seems very lonesome here after being away so long in such lovely company. 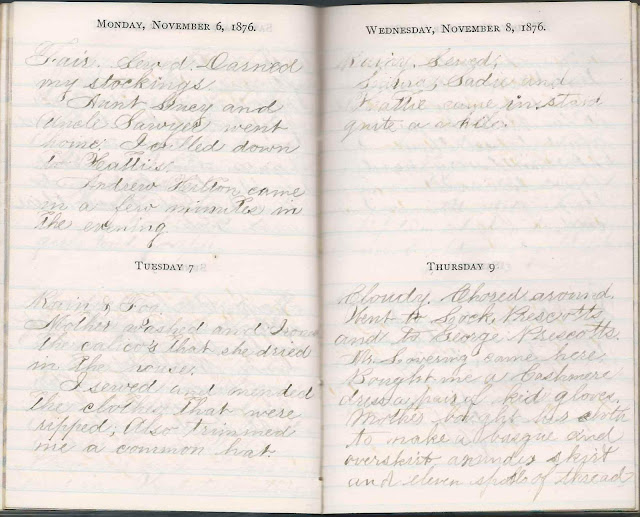 Monday, November 6, 1876:  Fair. Sewed. Darned my stockings.  Aunt Lucy and Uncle Sawyer went home. I called down to Hattie's.  Andrew Hilton came in a few minutes in the evening.

Tuesday, November 7, 1876:  Rain & Fog.  Mother washed and Ironed the calicos that she dried in the house.  I sewed and mended the clothes that were ripped; also trimmed me a common hat.

Thursday, November 9, 1876:  Cloudy. Chored around.  Went to Lock Prescott's and to George Prescott's. Mr. Lovering came here. Bought me a Cashmere dress, a pair of kid gloves.  Mother bought her cloth to make a basque and overskirt, ___ skirt and eleven spools of thread. 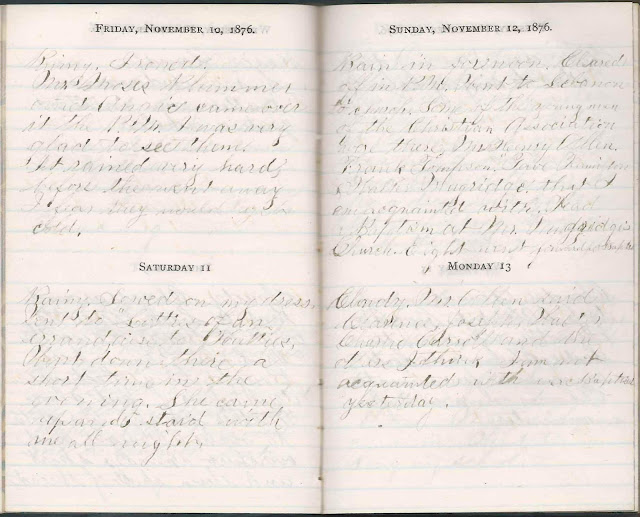 Friday, November 10, 1876:  Rainy, Ironed.  Mr & Mrs. Plummer and Angie came over in the PM. I was very glad to see them. It rained very hard before they went away. I fear they would get cold.

Saturday, November 11, 1876:  Rainy. Sewed on my dress.
Went to Lottie's of an errand and to Hattie's. Went down there a short time in the evening. She came up and stayed with me all night.

Sunday, November 12, 1876:  Rain in the forenoon. Cleared off in P.M. Went to Lebanon to church. Some of the young men of the Christian Association were there. Mr. Henry Allen, Frank Tompson, Tave Hamilton, Walter Mugridge that I am acquainted with. Had a Baptism at Mr. Mugridge;s Church. Eight went forward to get Baptized.

Monday, November 13, 1876:  Cloudy. Mr. Allen said Clarence, Joseph, Walter, Charlie Carroll and the others I think I am not acquainted with were Baptised yesterday. 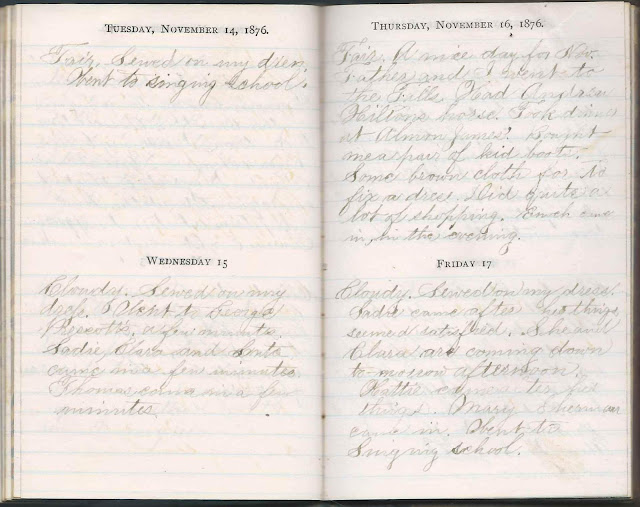 Thursday, November 16, 1876:  Fair. A nice day for Nov. Father and I went to the Falls. Had Andrew Hilton's horse. Took dinner at Almon James'. Bought me a pair of kid boots, Some brown cloth for to fix a dress. Did quite a lot of shopping. Enoch came in in the evening. 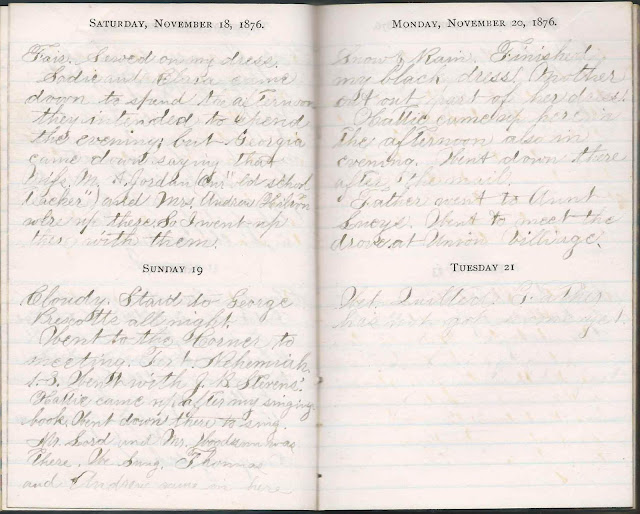 Saturday, November 18, 1876:  Fair. Sewed on my dress. Sadie and Clara came down to spend the afternoon. They intended to spend the evening; but Georgia came down saying that Miss M. A. Jordan, ("Our old school teacher") and Mrs. Andrew Hilton were up there. So I went up there with them.

Sunday, November 19, 1876:  Cloudy. Stayed to George Prescott's all night.  Went to the Corner to meeting. Text [?] Nehemiah.  A. B. [not sure of initials] Wentworth; J. B. Stevens.  Hattie came up after my singing book. Went down there to sing.  Mr. Lord and Mr. Woodsum was there. We Sung. Thomas and Andrew came in here.

Monday, November 20, 1876:  Snow & Rain. Finished my black dress. Mother cut out part of her dress.  Hattie came up here in the afternoon, also in evening. Went down there after the mail.  Father went to Aunt Lucy's. Went to meet the drove at Union Village. 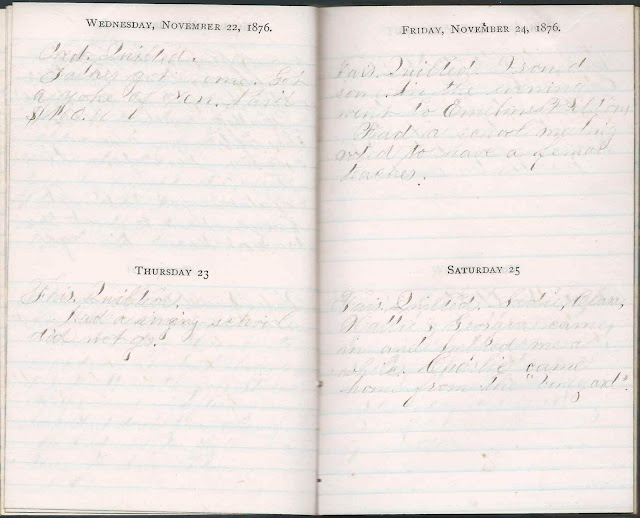 Friday, November 24, 1876:  Fair. Quilted. Ironed some. In the evening went to Emeline Hilton's.  Had a school meeting; voted to have a female teacher.

Saturday, November 25, 1876:  Fair. Quilted. Sadie, Clara, Walter & Georgia came in and helped me a while. Charlie came home from the "Vineyard". 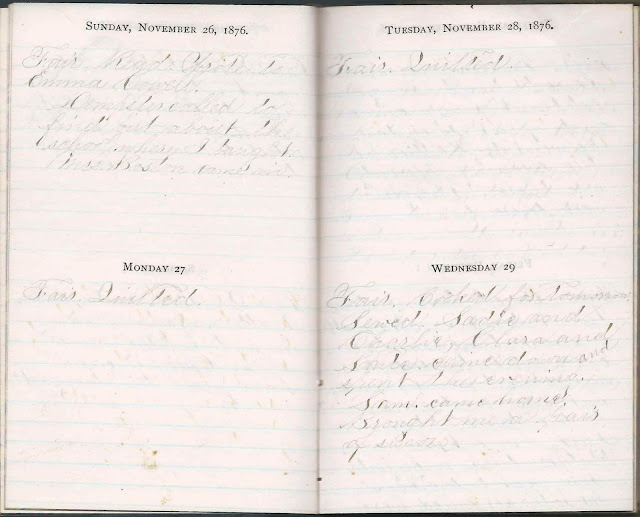 Sunday, November 26, 1876:  Fair. Read. Wrote to Emma Cowell.  Dempster called to find out about the school where I taught.  Mrs. Boston came in.

Wednesday, November 29, 1876:  Fair. Cooked for Tomorrow. Sewed. Sadie and Charlie, Clara and Lute came down and spent the evening.  Sam came home. Brought me a pair of scissors. 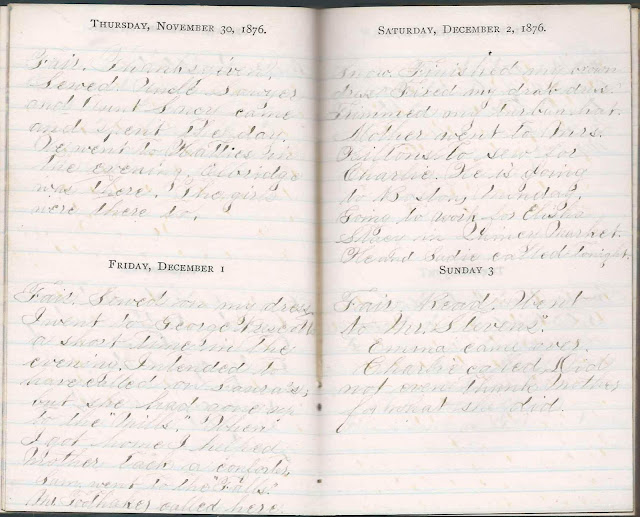 Thursday, November 30, 1876:  Fair. Thanksgiving. Sewed. Uncle Sawyer and Aunt Lucy came and spent the day.  We went to Hattie's in the evening. Elbridge was there. The girls were there, too.


Friday, December 1, 1876:  Fair. Sewed on my dress. I went to George Prescott's a short time in the evening. Intended to have called on Laura's but she had gone up to the "Mills". When I got home I helped Mother tack a comforter.  Sam went to the "Falls".  Mr. Toothaker called here.


Saturday, December 2, 1876:  Snow. Finished my brown dress. Fixed my drab dress. Trimmed my turban hat.  Mother went to Mrs. Hilton's to sew for Charlie.  He is going to Boston Monday. Going to work for Elisha Stacy in Quincy Market. He and Sadie called tonight.