Links to the months of April 1876 and February 1876 appear here and at the end of this post. 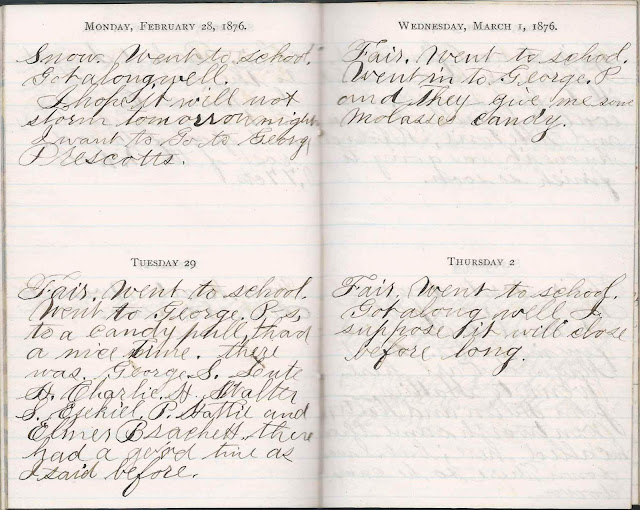 Monday, February 28, 1876:  Snow. Went to school. Got along well.  I hope it will not storm tomorrow night. I want to go to George Prescott's.

Tuesday, February 29, 1876:  Fair. Went to school. Went to George P's to a candy pull & had a nice time. There was George S., Lute H, Charlie H, Walter S, Ezekiel P., Hattie and Elmer Brackett there. Had a good time as I said before.

Wednesday, March 1, 1876:  Fair. Went to school. Went in to George P. and they give me some molasses candy.

Thursday, March 2, 1876:  Fair. Went to school. Got along well. I suppose it will close before long. 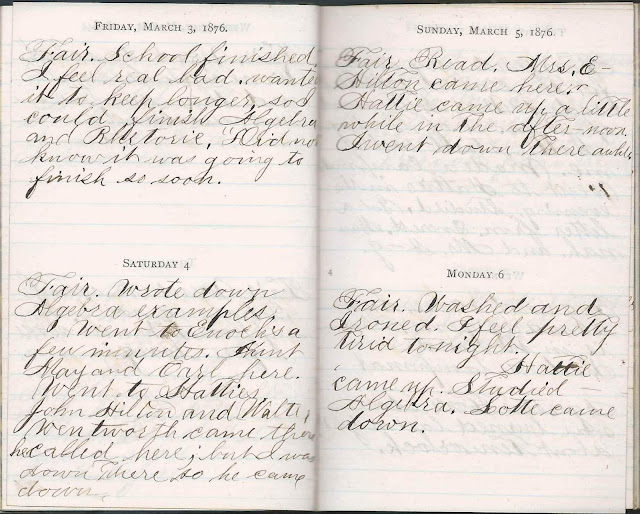 Friday, March 3, 1876:  Fair. School finished. I feel real bad; wanted it to keep longer so I could finish Algebra and Rhetoric. "Did not know it was going to finish so soon.

Saturday, March 4, 1876:  Fair. Wrote down Algebra examples. Went to Enoch's a few minutes. Aunt May and Carl here. Went to Hattie's.  John Hilton and Walter Wentworth came there. He called here, but I was down there so he came down.

Sunday, March 5, 1876:  Fair. Read. Mrs. E Hilton came here. Hattie came up a little while in the afternoon. I went down there a while. 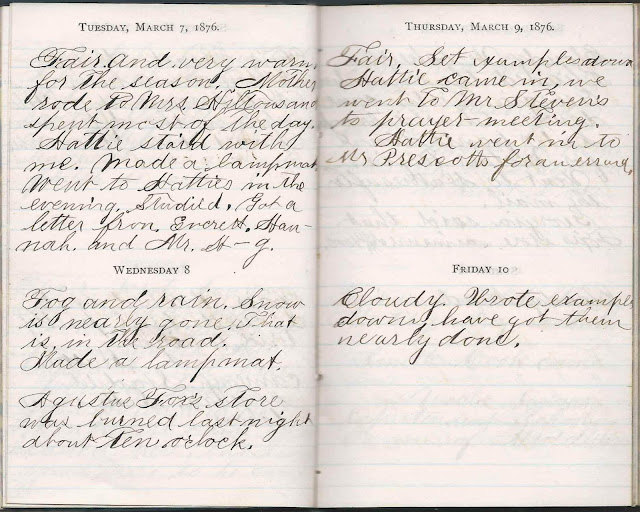 Tuesday, March 7, 1876:  Fair and very warm for the season.  Mother rode to Mrs. Hilton's and spent most of the day.  Hattie stayed with me. Made a lamp mat. Went to Hattie's in the evening. Studied. Got a letter from Everett. Hannah and Mr. H-g.

Wednesday, March 8, 1876:  Fog and rain. Snow is nearly gone. That is in the road. Made a lamp mat.
Augustus Fox's store was burned last night about ten o'clock.

Thursday, March 9, 1876:  Fair. Set examples down. Hattie came in; we went to Mr. Stevens' to prayer meeting.  Hattie went in to Mr. Prescott's for an errand. 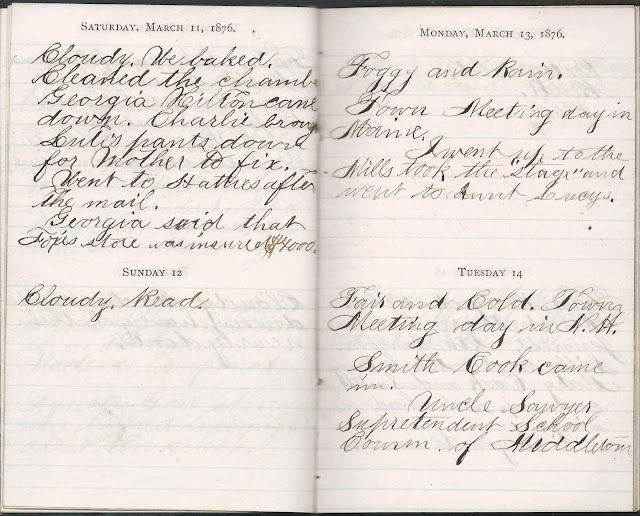 Saturday, March 11, 1876:  Cloudy. We baked. Cleaned the chamber. Georgia Hilton came down. Charlie brought Lute's pants down for Mother to fix.  Went to Hattie's after the mail.  Georgia said that Fox's store was insured $4000. 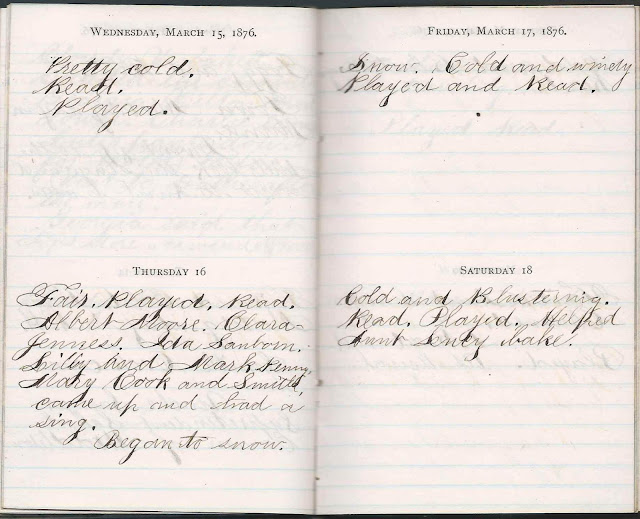 Thursday, March 16, 1876:  Fair. Played. Read. Albert Moore, Clara Jenness, Ida Sanborn, Lilly [definitely looks like Lilly here, but in a later entry about a sing, Ida mentions a Tilly.] and Mark Penny, Mary Cook and Smith came up and had a sing.  Began to snow. 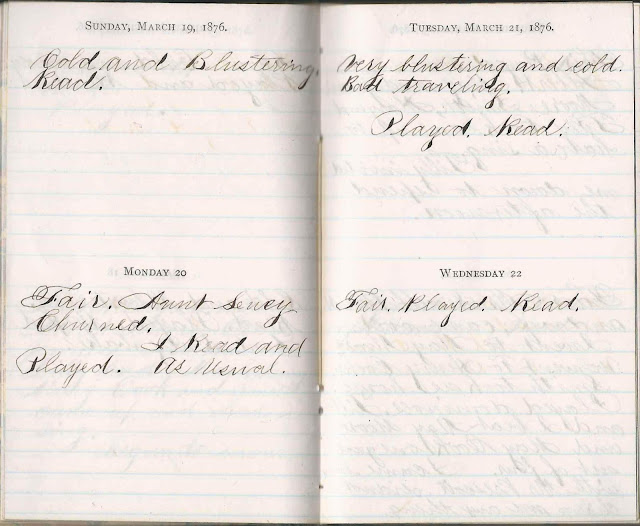 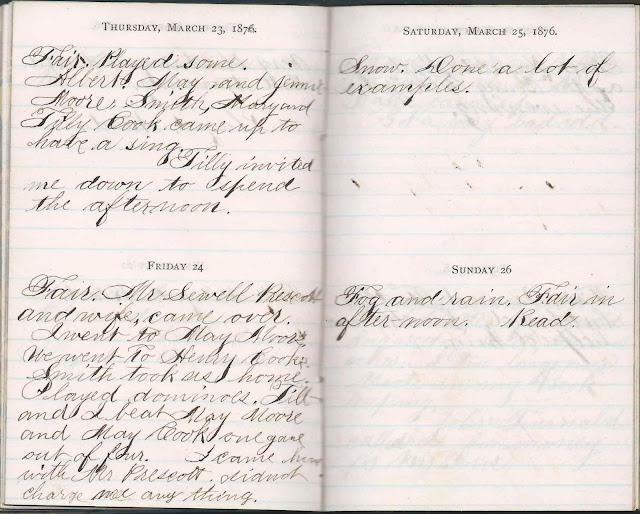 Thursday, March 23, 1876:  Fair. Played some.  Albert, May and Jennie Moore, Smith, Mary and Tilly Cook came up to have a sing.  Tilly invited me down to spend the afternoon.

Friday, March 24, 1876:  Fair. Mr. Sewell Prescott and wife came over. I went to Henry Cook's. Smith took us home.  Played dominoes. Till and I beat Mary Moore and May Cook one game out of four. I came home with Mr. Prescott. Did not charge me anything. 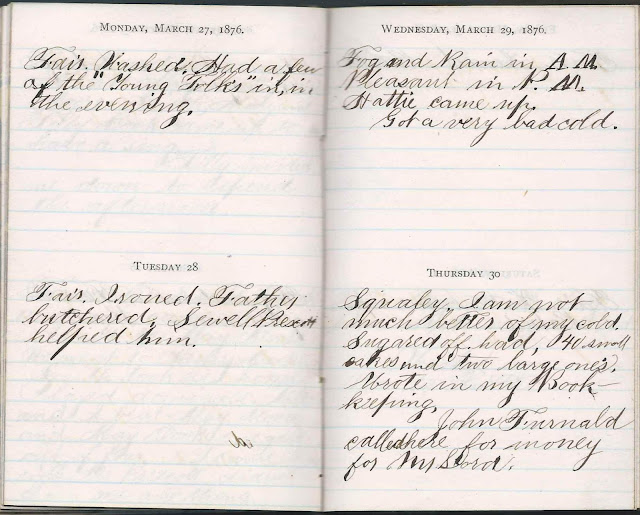 Thursday, March 30, 1876:  Squally. I am not much better of my cold. Sugared off, had 40 small cakes and two large ones. Wrote in my Book-keeping.  John Furnald called here for money for Mr. Lord. 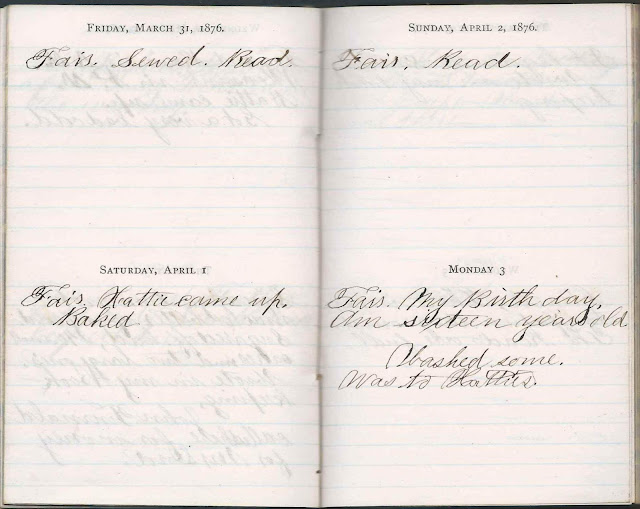