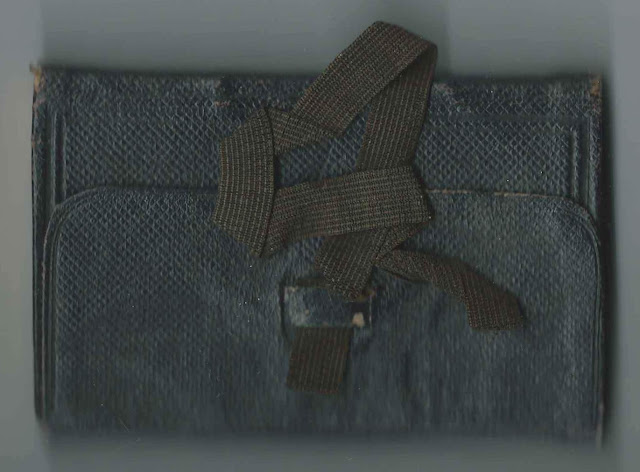 Links to the months of January 1874 and March 1874 appear here and at the end of this post.


Following the images and transcriptions below is a list of the people mentioned, in order of appearance, only once, as some are mentioned multiple times. 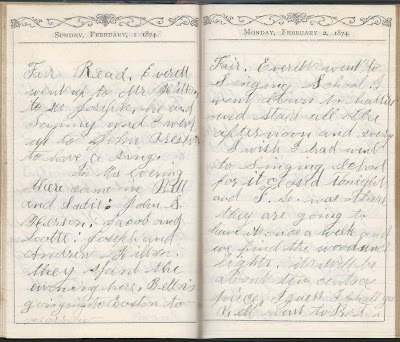 Sunday, February 1, 1874:  Fair. Read. Everett went up to Mr. Hilton's to see Joseph. He and Sammy and I went up to John Prescott's to have a sing.  In the evening there came in Bell and Sadie, John S. Hersom, Jacob and  Lotte, Joseph and Andrew Hilton. They spent the evening here.  Bell is going to Boston tomorrow.
Monday, February 2, 1874:  Fair. Everett went to Singing School. I went down to Hattie's and stayed all the afternoon and evening.  I wish I had went to Singing School for it closed tonight and F. L. was there. They are going to have it once a week and we find the wood and lights. It will be about ten cents apiece. I guess I shall go. Bell went to Boston. 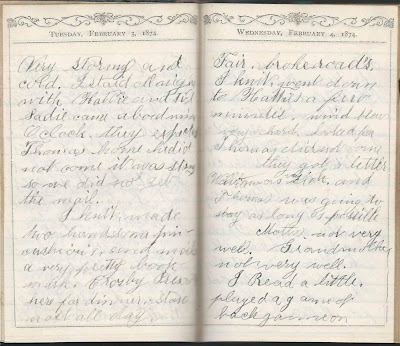 Tuesday, February 3, 1874:  Very Stormy and cold. I stayed all night with Hattie and til Sadie came about nine o'clock. They expect Thomas home. He did not come. It was stormy so we did not get the mail.  I knit, made two handsome pin cushions and made a very pretty book mark.  Crosby Prescott here for dinner. Stayed most all day.
Wednesday, February 4, 1874:  Fair. Broke roads. I knit, went down to Hattie's a few minutes. Wind blew very hard. Looked for Thomas, did not come.  They got a letter.  Walter was sick and Thomas was going to stay as long as possible.  Mother not very well. Grandmother not very well.  I Read a little. played a game of backgammon. 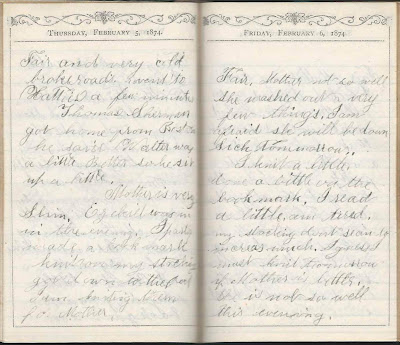 Thursday, February 5, 1874:  Fair and very cold. broke roads. I went to Hattie's a few minutes.
Thomas Sherman got home from Boston. He said Walter was a little Better so he sit up a little.
Mother is very Slim. Ezekiel was in in the evening. I partly made a book mark.  Knit on my stocking. got down to the foot. I am knitting them for Mother.
Friday, February 6, 1874:  Fair. Mother not so well. She washed out a very few things. I am afraid she will be down sick tomorrow.  I knit a little, done a little on the bookmark. I read a little, am tired.  My stocking don't seem to increase much. I guess I must knit tomorrow if Mother is better. She is not so well this evening. 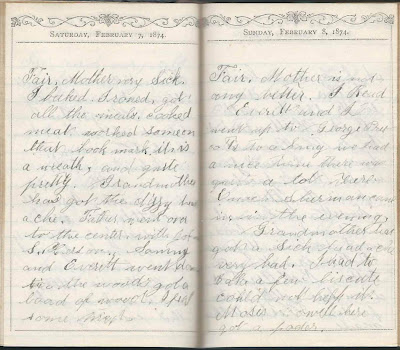 Saturday, February 7, 1874:  Fair. Mother very Sick. I baked, Ironed, got all the meals. Cooked meat. worked some on that bookmark. It is a wreath, and quite pretty. Grandmother has got the dizzy headache. Father went over to the center with John S. Hersom. Sammy and Everett went down to the woods, got a load of wood. I feel some tired.
Sunday, February 8, 1874:  Fair. Mother is not any better. I Read.  Everett and I went up to George Prescott's to a Sing. We had a nice time; there was quite a lot there.  Enoch Sherman came in in the evening.  Grandmother has got a Sick headache very bad. I had to Bake a few biscuits. Could not help it. Moses Cowell here. got a ___ [powder ?] 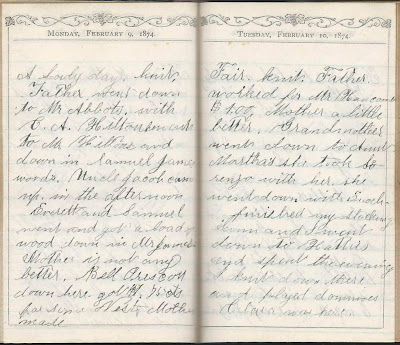 Monday, February 9, 1874:  A Lovely day. Knit.  Father went down to Mr. Abbot's with C. A. Hilton ___to Mr. Hilton's and down in Samuel James' woods. Uncle Jacob came up in the afternoon.
Everett and Samuel went and got a load of wood down in Mr. James.  Mother is not any better. Bell Prescott down here. Got 75 cents for some Vests Mother made.
Tuesday, February 10, 1874: Fair. Knit. Father worked for Mr. Hanscomb. $1.00. Mother a little better. Grandmother went down to Aunt Martha's. She took Lorenzo with her. She went down with Enoch.  Finished my stocking. Sam and I went down to Hattie's and spent the evening. I knit down there and played dominoes. Clara was here. 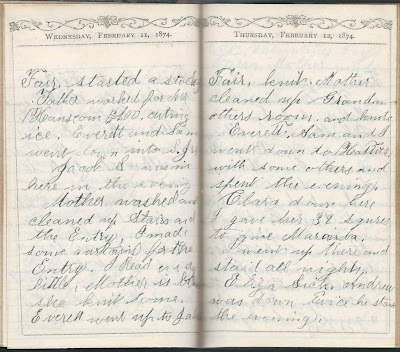 Wednesday, February 11, 1874:  Fair. Started a stocking. Father worked for Mr. Hanscom $1.00 cutting ice.  Everett and Sam went down into S.J. [presumably Samuel James' woodlot].  Jacob S was in here in the evening.  Mother washed and cleaned up Stairs and the Entry. I made some curtains for the Entry. I Read ___ little. Mother is better. She knit some. Everett went up to J__
Thursday, February 12, 1874:  Fair. Knit. Mother cleaned up Grandmother's room and knit.  Everett, Sam and I went down to Hattie's with some others and spent the evening.  Clara down here. I gave her 39 squares to give Marinda.  I went up there and stayed all night.  Eliza Sick.  Andrew was down twice. He stayed the evening. 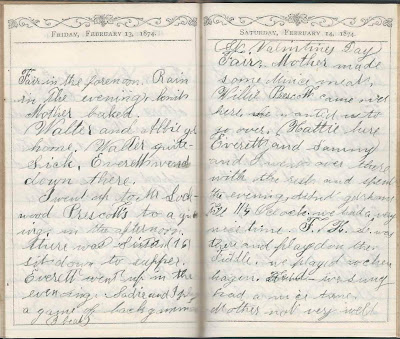 Friday, February 13, 1874:  Fair in the forenoon. Rain in the evening. Knit. Mother baked.  Walter and Abbie got home. Walter quite Sick. Everett went down there.  I went up to Mr. Lockwood Prescott's to a ___ in the afternoon. There was Sixteen (16) sit down to supper. Everett went up in the evening. Sadie and I played a game of backgammon. (I beat)
Saturday, February 14, 1874:  (St. Valentine's Day). Fair. Mother made some Mincemeat. Willie Prescott came over here, wanted us to go over. Hattie here. Everett and Sammy and I went over there with the rest and spent the evening, didn't get home till 11-1/4 o'clock. We had a very nice time. F. H. L. [Freeman H. Lowd] was there and played on the fiddle. We played  Copenhagen. ____ we sung, had a nice time. Mother not very well. 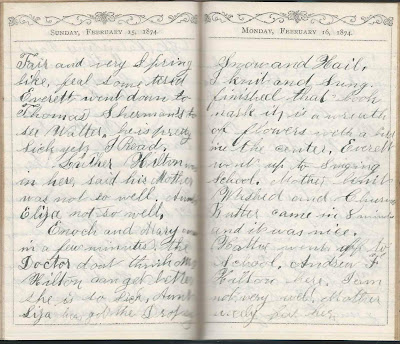 Sunday, February 15, 1874:  Fair and very Springlike. Feel some tired. Everett went down to Thomas Sherman's to see Walter. He is pretty Sick yet. I Read.  Luther Hilton was in here, said his Mother was not so well. Aunt Eliza not so well.  Enoch and Mary came in a few minutes. The Doctor don't think Mrs. Hilton can get better. She is so sick. Aunt Liza has got the Dropsy.
Monday, February 16, 1874:  Snow and Hail. I knit and Sung. Finished that book mark; it is a wreath of flowers with a bird in the center. Everett went up to Singing School. Mother knit, Washed and Churned. Butter came in 8 minutes and it was nice.  Hattie went off to School. Andrew F. Hilton here. I am not very well. Mother nicely for her. 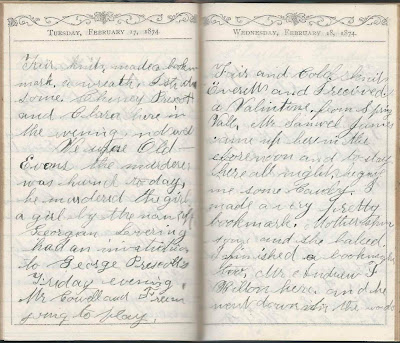 Tuesday, February 17, 1874:  Fair. Knit, made a bookmark, a wreath. I studied some. Cheney Prescott and Clara here in the evening ___  We suppose Old Evans the murderer was hung today. He murdered the girl, a girl by the name of Georgiannia Lovering.  Had an invitation to George Prescott's Friday evening. Mr. Cowell and Freeman going to play.
Wednesday, February 18, 1874:  Fair and Cold. Knit. Everett and I received a Valentine from Spring Vale. Mr. Samuel James came up here in the forenoon and to stay here all night. He gave me some Candy. Made a very pretty bookmark. Mother spun some and she baked. I finished a bookmark, too. Mr. Andrew F. Hilton here and he went down in the woods. 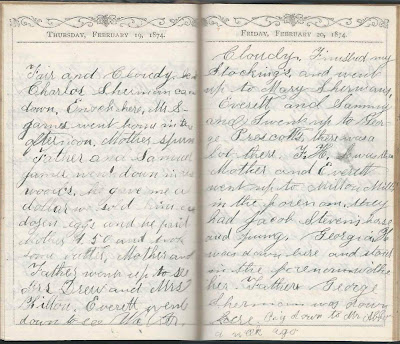 Thursday, February 19, 1874:  Fair and Cloudy. __ Charlos Sherman came down. Enoch here. Mr. S. James went home in the afternoon. Mother spun.  Father and Samuel James went down in the woods. He gave me a dollar. we sold him a dozen eggs and he paid Mother $1.50 and took some Vests. Mother and Father went up to see Mrs. Drew and Mrs. Hilton. Everett went down to see Walter.
Friday, February 20, 1874:  Cloudy. Finished my Stockings and went up to Mary Sherman's.  Everett and Sammy and I went up to George Prescott's. There was a lot there. F. H. L.  was there.  Mother and Everett went up to Milton Mills in the forenoon. They had Jacob Stevens' horse and pung. Georgia H. was down here and stayed in the forenoon with her Father. George Sherman was down here. ___ down to Mr. Abbott a week ago. 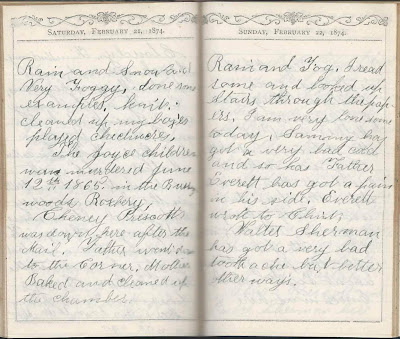 Saturday, February 21, 1874:  Rainy and Snow and Very Foggy. Done some examples. Knit. Cleaned up my ___, played checkers.  The Joyce children was murdered June 12, 1865 in the Bussey woods, Roxbury.  Cheney Prescott was down here after the Mail. Father went down to the Corner. Mother Baked and Cleaned up the Chamber.
Sunday, February 22, 1874:  Rain and Fog. I read some and looked up stairs through the papers. I am very lonesome today. Sammy has got a very bad cold and so has Father. Everett has got a pain in his side. Everett wrote to ___ [Clint ?]  Walter Sherman has got a very bad toothache but better other ways. 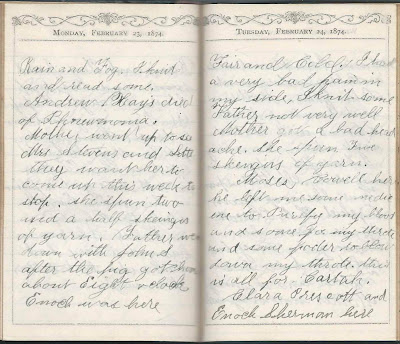 Monday, February 23, 1874:  Rain and Fog. I knit and read some. Andrew Hays died of Pneumonia.  Mother went up to see Mrs. Stevens and Lottie. They want her to come up this week to stop. She spun two and a half skeins of yarn. Father went down with John S. after the pig. got home about Eight o'clock. Enoch was here.
Tuesday, February 24, 1874:  Fair and Cold. I had a very bad pain in my side. I knit some. Father not very well. Mother got a bad head ache. She spun Five skeins of yarn.  Moses Cowell here. He left me some medicine to Purify my blood and some for my throat and some powder to blow down my throat. This is all for Catarrh.  Clara Prescott and Enoch Sherman here. 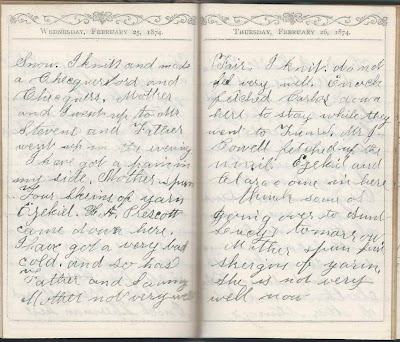 Wednesday, February 25, 1874:  Snow. I knit and made a Checquer board and Checquers. Mother and I went up to Mr. Stevens and Father went up in the evening.  I have got a pain in my side. Mother spun Four skeins of yarn.  Ezekiel H. A. Prescott came down here. I have got a very bad cold and so has Father and Sammy. Mother not very well.

Thursday, February 26, 1874:  Fair. I knit. do not feel very well. Enoch fetched Carlos down here to stay while they went to Funeral. Mr. J. Cowell fetched up the mail. Ezekiel and Clara came in here.
Think some of going over to Aunt Lucy tomorrow.  Mother spun five skeins of yarn. She is not very well now. 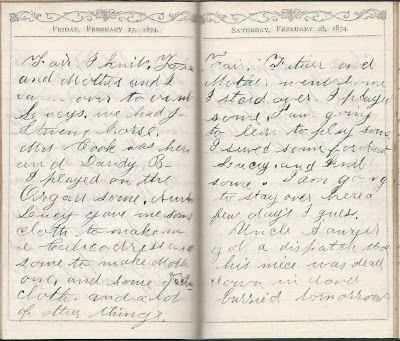 Friday, February 27, 1874:  Fair. I knit. Father and Mother and I came over to Aunt Lucy's. We had J. Stevens' horse. Mrs. Cook was here and Dandy B. I played on the Organ some. Aunt Lucy gave me some cloth to make me a Calico dress and some to make Mother one, and some ___ cloth and a lot of other things.


Saturday, February 28, 1874:  Fair. Father and Mother went home. I stayed over. I played some. I am going to learn to play some. I sewed some for Aunt Lucy and kinit some. I am going to stay over here a few days, I guess.  Uncle Sawyer got a dispatch that his niece was dead down in Dover; buried tomorrow.

Posted by Pam Beveridge at 1:18 PM