Links to the months of July 1874 and September 1874 appear here and at the end of this post. 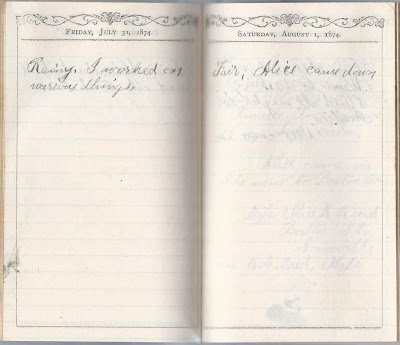 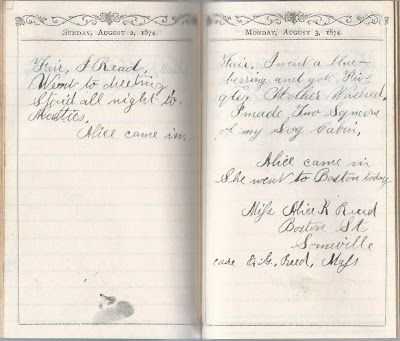 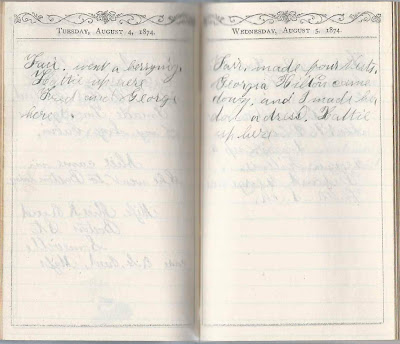 Wednesday, August 5, 1874:  Fair. Made four Vests. Georgia Hilton came down, and I made her doll a dress. Hattie up here. 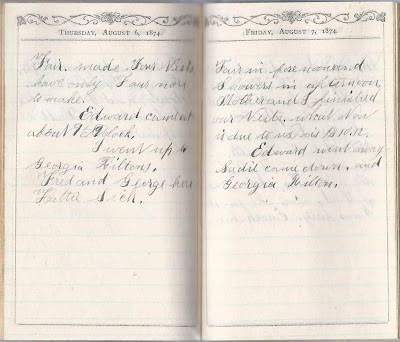 Thursday, August 6, 1874:  Fair. Made Four Vests. Have only Four more to make.  I went up to Georgia Hilton's.  Fred and George here.  Hattie sick

Friday, August 7, 1874:  Fair in forenoon and Showers in afternoon. Mother and I finished our Vests. what Now is due to us is $10.12.  Edward went away.  Sadie came down and Georgia Hilton. 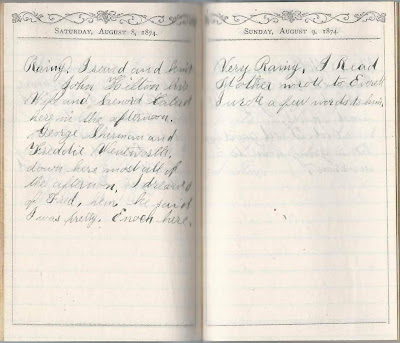 Saturday, August 8, 1874:  Rainy. I sewed and knit.  John Hilton, his Wife and Leonard called here in the afternoon.  George Sherman and Freddie Wentworth down here most all of the afternoon. I dreamed of Fred, hem, he said I was pretty. Enoch here. 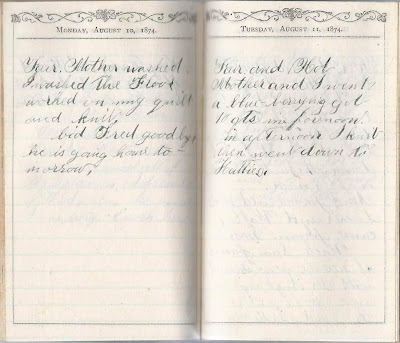 Tuesday, August 11, 1874:  Fair and Hot. Mother and I went a blueberrying, got 10 qts in forenoon. In afternoon I knit, then went down to Hattie's. 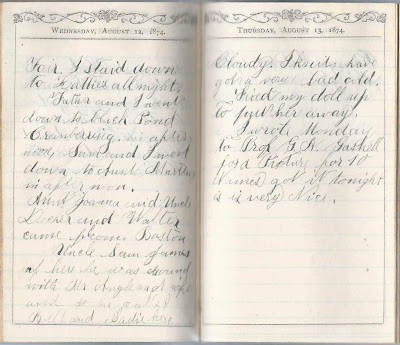 Wednesday, August 12, 1874: Fair. I stayed down to Hattie's all night.  Father and I went down to Black Pond Cranberrying. In afternoon Sam and I went down to Aunt Martha's in afternoon.
Aunt Joanna and Uncle Decker and Walter came from Boston.  Uncle Sam James up here. He was around with Mr. Angle and wife and so he called. Bell and Sadie here. 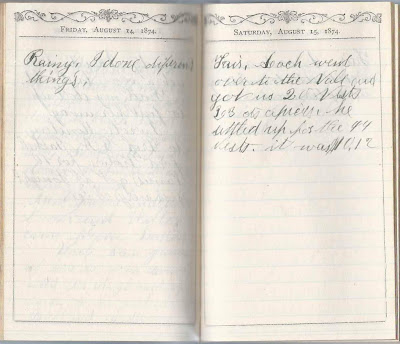 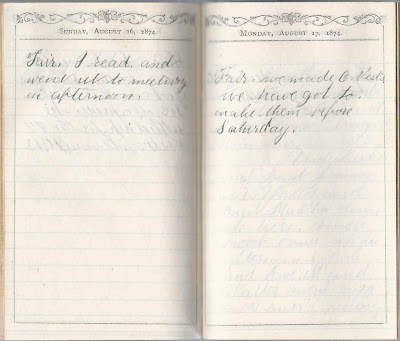 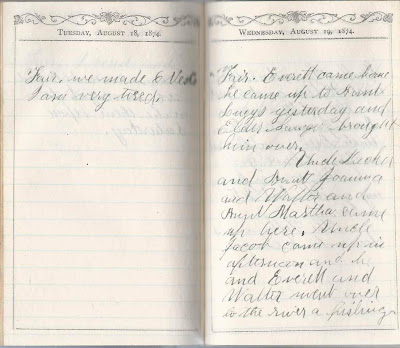 Wednesday, August 19, 1874:  Fair. Everett came home. He came up to Aunt Lucy's yesterday and Elder Sawyer brought him over.  Uncle Decker and Aunt Joanna and Walter and Aunt Martha came up here. Uncle Jacob came up in afternoon and he and Everett and Walter went over to the river a-fishing. 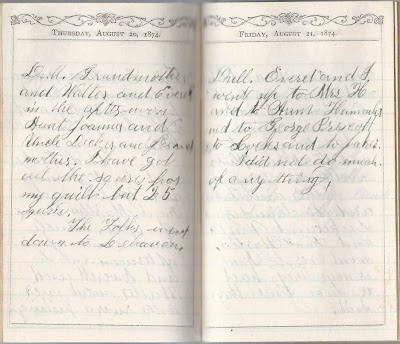 Thursday, August 20, 1874:  Dull. Grandmother and Walter and Everett in the afternoon.
Aunt Joanna and Uncle Decker and Grandmother. I have got all the squares for my quilt but 25 squares.  The Folks went down to Lebanon. 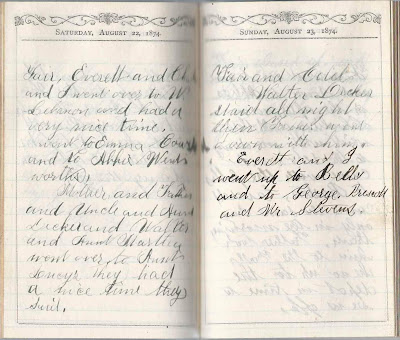 Saturday, August 22, 1874:  Fair. Everett and Charles and I went over to W. Lebanon and had a very nice time. Went to Emma Cowell's and to Abbie Wentworth's.  Mother and Father and Uncle and Aunt Decker and Walter and Aunt Martha went over to Aunt Lucy's. They had a nice time they said.

Sunday, August 23, 1874:  Fair and Cold. Walter Decker stayed all night. Then Father went down with him.  Everett and I went up to Bell's and to George Prescott and Mr. Stevens.


Ida has embarked on an extended visit with her maternal aunt Joanna Farnham (Reynolds) Decker (1825-1909) and uncle Nathaniel Curtis Decker (1828-1888) and their son Walter Curtis Decker (1855-1900) in Boston, Massachusetts.  She'll stay with the Deckers at least through December 1874.  The 1875 diary is missing, so when Ida returned home to Acton, Maine, is unknown. 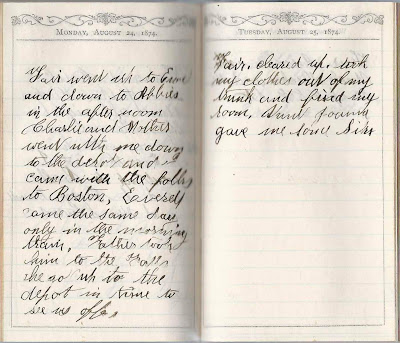 Monday, August 24, 1874:  Fair. Went up to Emma's and down to Abbie's in the afternoon.
Charlie and Mother went with me down to the depot and came with the folks to Boston. Everett came the same day, only in the morning train. Father took him to the Falls. He got up to the depot in time to see us off. 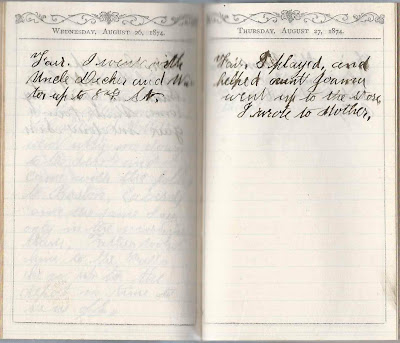 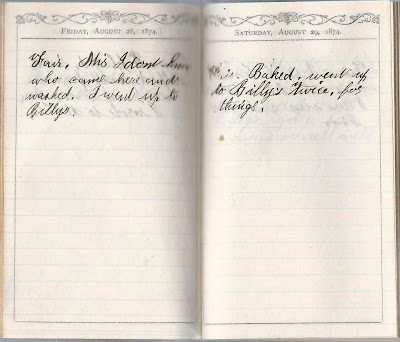 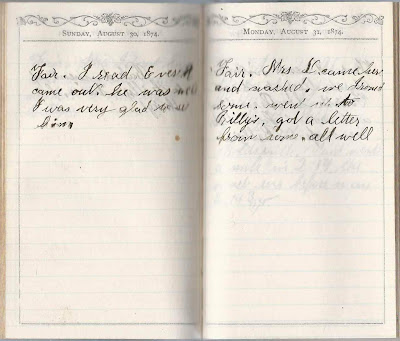