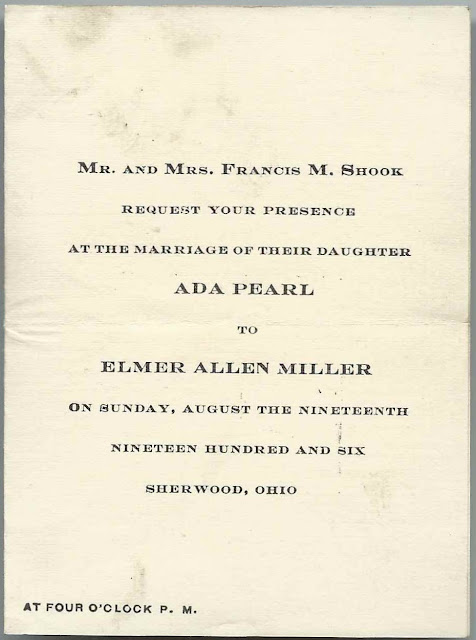 Invitation to the wedding of Ada Pearl Shook and Elmer Allen Miller, to be held on Sunday, August 19, 1906 at Sherwood, Ohio.   Ada's parents were Mr. and Mrs. Francis M. Shook.

The invitation, which measures approximately 4" by 3", was found tucked in the Bible of Jeremiah Bloom & Susanna (Snyder) Bloom, which was apparently passed on to their son James Hagan Bloom, who was an undertaker and furniture dealer at Sherwood, Ohio.  He and his wife Louise (Miller) Bloom were presumably the recipients of this invitation.  It's tempting to think that Louise and Elmer Allen Miller were related.

Ada Pearl Shook, according to her birth record in Ohio Births and Christenings, 1821-1962, was born August 2, 1885 in Delaware Township, Ohio, in Defiance County, the daughter of Francis M. Shook and Susie (Roch or Rock) Shook.

I think that Elmer was the son of John J. Miller and Rebecca Catherine (Miller) Miller.  Though Elmer's parents were Ohio natives, he was born in Washington state in 1879.

Marriage records corroborate the information in the invitation.

Ada died in 1921.  Elmer subsequently married Emma Seneca Rock.  Emma died in 1956 and Elmer in 1969.  All three are buried in the Sherwood Cemetery at Sherwood, Ohio.