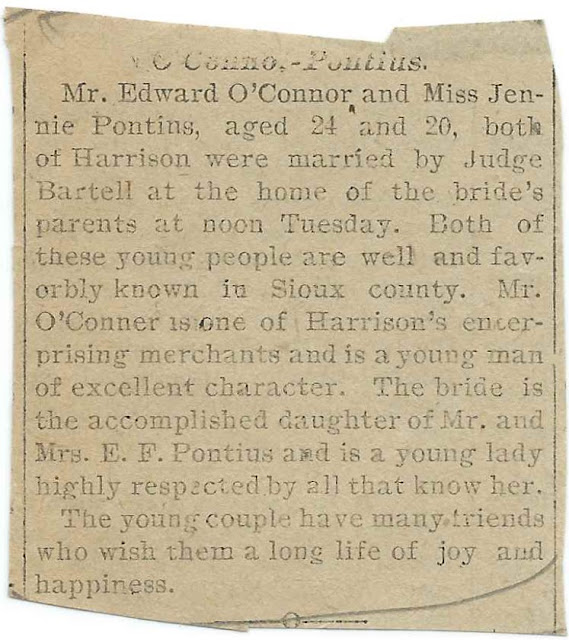 Circa 1903 marriage notice of Edward O'Connor and Miss Jennie Pontius of Harrison, Nebraska.   In the 1910 Census of Bowen, Nebraska, Edward and Jennie noted that they had been married for seven years.

The clipping misspells Pontius as Pontins in one case.  Transcription at the end of this post.

The clipping was tucked in the Bible of Jennie's maternal grandparents, Jeremiah Bloom and Susanna (Snyder) Bloom, Pennsylvania residents who moved to Ohio.  Judging from the mementos tucked inside the Bible, it then passed to their son James Hagan Bloom, an undertaker and furniture dealer at Sherwood, Ohio.

The Bible contains 3 pages of family records, many CDVs and tintypes and other mementos, including several other newspaper clippings.

Jennie's mother, Elizabeth Belzora Bloom (Pontius), was born August 12, 1855 in Richland County, Ohio, daughter of Jeremiah Bloom and Susanna (Snyder).  On September 25, 1873, Elizabeth married Edward Franklin Pontius.  The date and place of Elizabeth's birth and the date of her marriage appear on the family records pages of the Bible.   Elizabeth and Edward moved to Nebraska, eventually to Harrison.

Jennie Adora Pontius was born June 22, 1882 in Nebraska.  Her future husband, Edward Smith O'Connor, was born April 4, 1878 in Iowa.  Jennie and Edward lived at Bowen and Scottsbluff, Nebraska, before moving to Wyoming, first to Douglas and later to Casper.  I didn't find records of any children.  At various times Edward farmed, sold automobiles or worked as a barber.

Edward died in 1956 and Jennie in 1968.  They're buried in the Harrison Cemetery at Harrison, Nebraska.

O'Connor - Pontius
Mr. Edward O'Connor and Miss Jennie Pontius, age 24 and 20, both of Harrison were married by Judge Bartell at the home of the bride's parents at noon Tuesday.  Both of these young people are well and favorably known in Sioux county.  Mr. O'Connor is one of Harrison's enterprising merchants and is a young man of excellent character.  The bride is the accomplished daughter of Mr. and Mrs. E. F. Pontius and is a young lady highly respected by all that know her.
The young couple have many friends who wish them a long life of joy and happiness.

Posted by Pam Beveridge at 4:49 PM