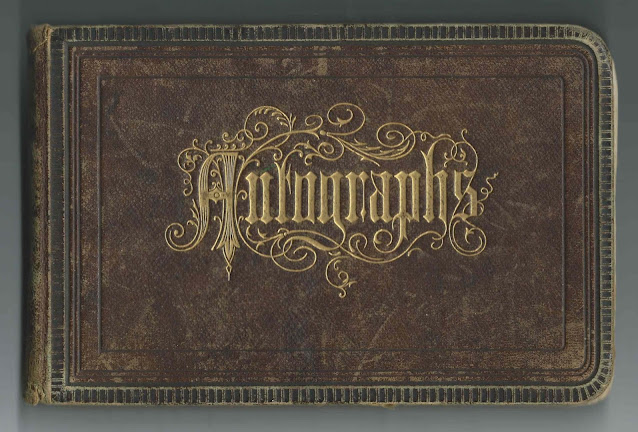 1876-1881 autograph album that belonged to Luella N. Williams, "Lou", who was a student at Almira College, now known as Greenville College, at Greenville, Illinois, when a majority of the sentiments were acquired.

Many thanks to the Archivist at Greenville College for sending me the residences of many of the signers.

The album measures approximately 7-1/2" x 5" and contains the sentiments of about 100 people, a few of whom signed more than one page.  Many were Luella's fellow students at Almira College.
She apparently belonged to a group, formal or informal, called Q. Q.  Several signers referred to Q. Q., and one page entitled Q.Q., with a graphic on its facing page, had four autographs on it, including that of Luella herself.  The others were Belle Knowles, Lottie M. Palmer and Laura Newberry; they also signed individual pages.

Another page, entitled "In Memory Of", was penned at Geneva, Illinois, on June 26, 1876 and lists five names.  The facing page shows a cross and flowers.

A. G. Coleman
C. A. Howell
H. S. Chambers
I. Bevan Hopkins - not sure of this name
W. Lee Chambers 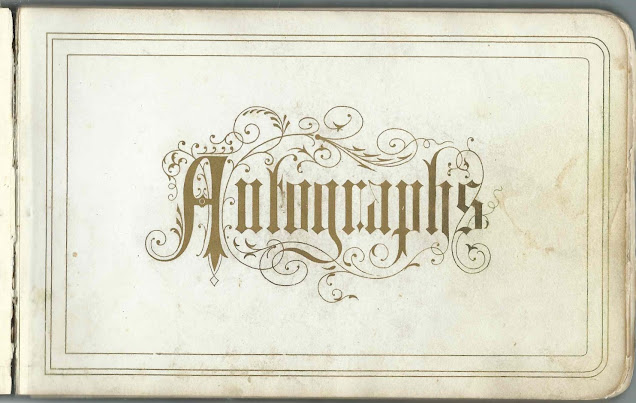 Luella N. Williams, "Lou", was born August 29, 1856 in Illinois, the daughter of Madison and Lydia (Moore) Williams of Wood River, Illinois, near Alton, by the Mississippi River.  Lou had, I think, five siblings.  One of them, J. Abel Williams, was killed by oxen at the age of 13.  Another, Mary J. Williams, died in 1866.
Lou's oldest brother, Thomas Irby Williams, inscribed a page in her album as Irby Williams; he described how pleasant it would be when Lou returned home.  There's a scrap of fabric tucked in this page. 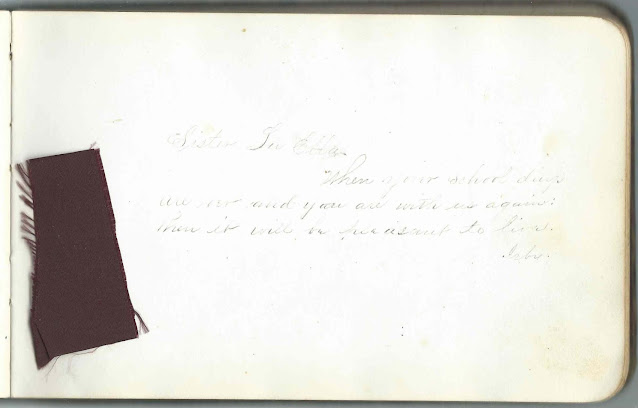 Later in life, on February 17, 1918 in Los Angeles, California, Lou married Thomas Hamilton.  Perhaps he was related to the Hamiltons who inscribed pages in the album, including Effie N. Hamilton, who may have been Lou's close friend.
C. S. Stahl inscribed a page on Monday, April 18, 1879 and pasted a newspaper clipping that mentioned that Mr. A. G. Williams of Clyde was visiting Cinderella.  Someone, presumably C. S. Stahl rubbed part of the text out and inserted the names of Luella and Effie. 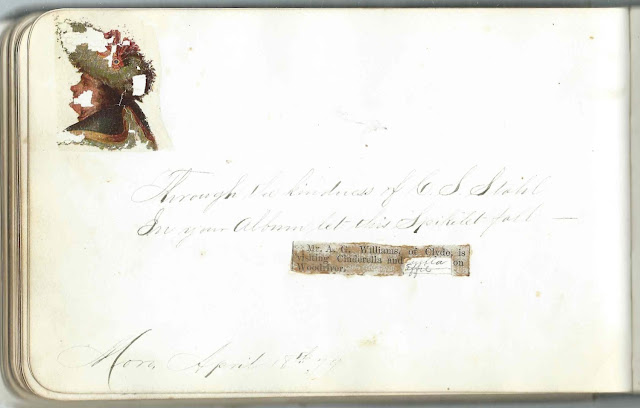 Luella N. (Williams) Hamilton died in 1940 and is buried in Upper Alton, Illinois, with her husband and her family.

For more information on Luella's family, see here and here, information provided by the Alton Museum of History and Art at Alton, Illinois.

If you have corrections and/or information on any of the people mentioned, please leave a comment for the benefit of other researchers.

Surnames in the album - some may be repeats

Signers in the Album         [Note: Given names within a specific surname may not be in alphabetical order.]  Again, many thanks to the Archivist at Greenville College for supplying the home towns of many of the signers who didn't already do so.
A
B
C
D
E
F
G
H
J
K
L
M
N
P
R
S
T
U
W

Posted by Pam Beveridge at 4:52 PM