See a note of January 22, 2016, added to the end of this post, for further information.

Two memorial cards, one for William R. Penniman of Braintree, Massachusetts, and the other for his daughter-in-law Mary Ethel (Hall) Penniman, wife of Walter Aldrich Penniman, of Brockton, Massachusetts. The reverse of William's memorial card has the imprint of the maker, Memorial Card Co. of No. 706 Chestnut Street, Philadelphia, Pennsylvania.
From brief online research, hopefully correct: [corrections and additions welcome!]

William was a prominent contractor, responsible for many buildings in eastern Massachusetts. He was Braintree's representative to the General Court in 1855. Louisa was a professor of music at Hollis Institute in South Braintree.  They had five children:
On 12 November 1885 at Brockton, Massachusetts, son Walter Aldrich Penniman married Mary Ethel Hall, daughter of Augustus Florentine Hall and Susan Elizabeth (Osborne) Hall. Mary Ethel was born 1 December 1861 at East Bridgewater, Massachusetts.  On Census forms, Walter's occupation is listed as carpenter, but he was perhaps a contractor like his father, perhaps in the family business.

Walter and Mary Ethel had a daughter, Rita Mildred Penniman, "May", born 31 October 1890 at Brockton, Massachusetts. She would marry Herman Ralph Eaton at Worcester, Massachusetts, in 1912.

Mary Ethel (Hall) Penniman died of cancer on 19 May 1897 at Brockton, Massachusetts. 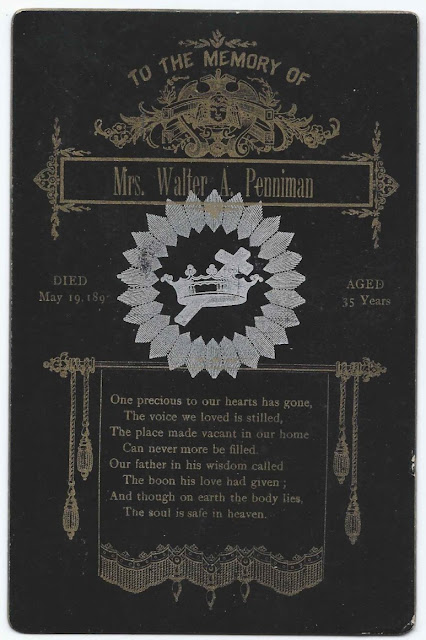 Note of January 22, 2016: Coincidentally, a carte de visite, purchased at a later time, depicting Isabella Calef, a teacher for a while at Brockton, Massachusetts, contains information on the reverse about her student M. Ethel Hall ("Grandma Ethel"); Rita Penniman and Keziah Murdock.

If you have correction and/or additions to the information above, please leave a comment or contact me directly.