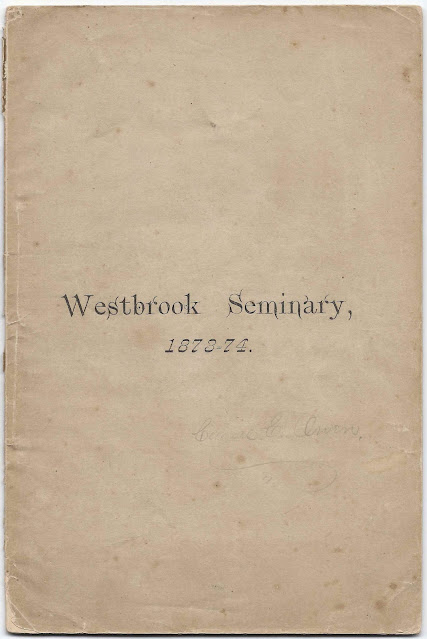 1873-74 Catalogue of Westbrook Seminary, located on Stevens Plains in Portland, Maine.
An alphabetical list of everyone mentioned in the catalogue appears at the end of this post.

The engraving below shows, from left to right, the Church, Goddard Hall, Dining Hall, Hersey Hall and the Seminary Building. 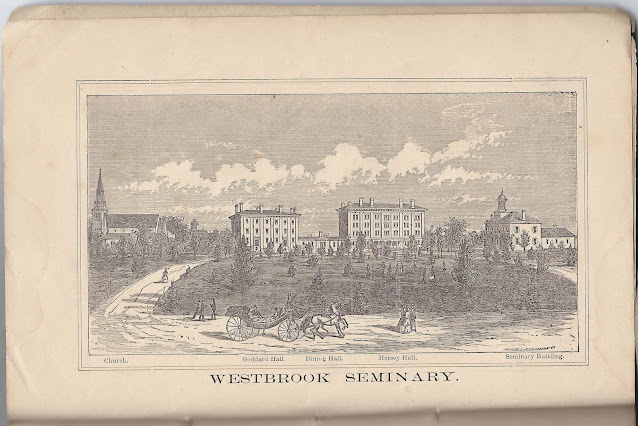 The catalog measures 9" x 6" and contains 32 pages listing names of the Trustees, the Board of Instruction, the Examining Committee, the Board of Visitors, Current students and Graduates dating back to 1863. 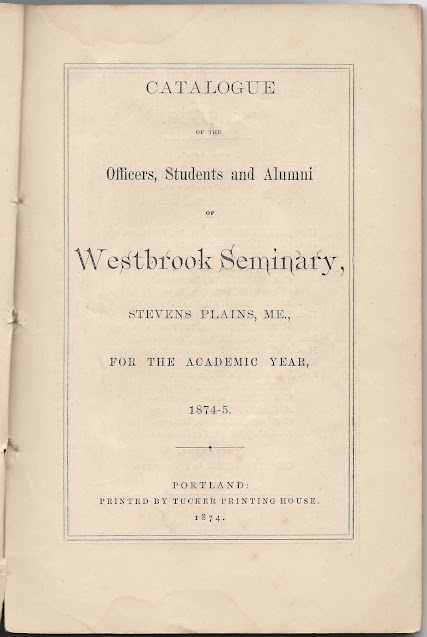 The catalog was printed by the Tucker Printing House at Portland, Maine, in 1874. 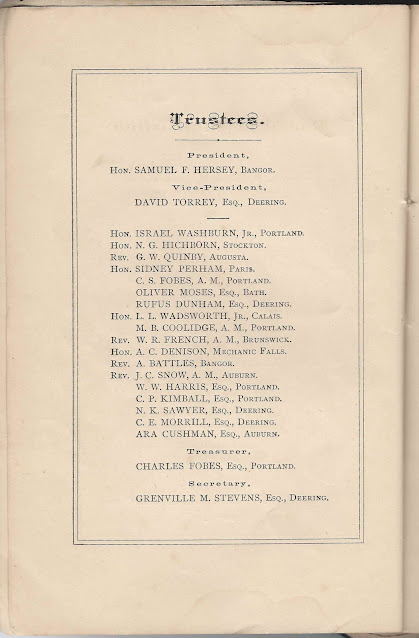 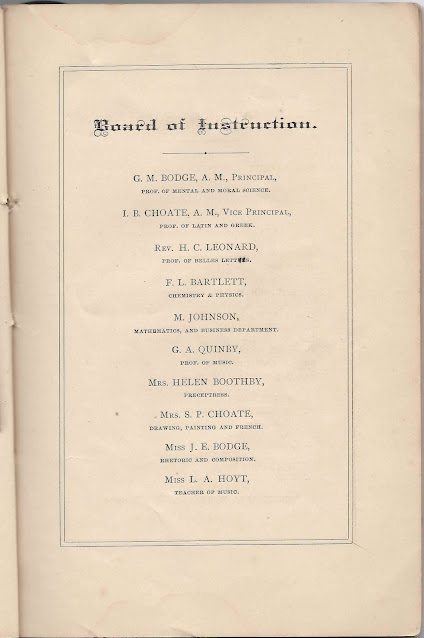 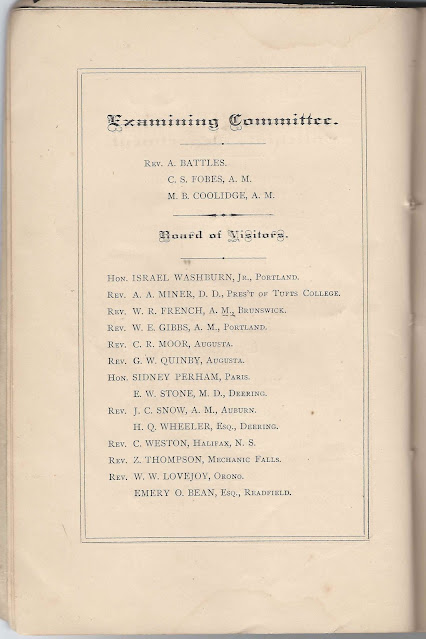 Two pages detail the history of the Seminary. 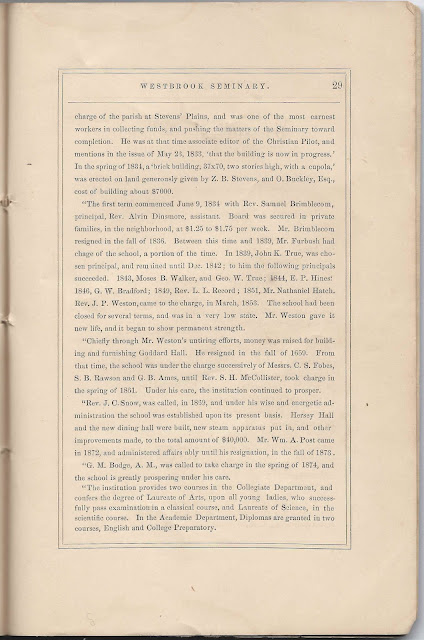 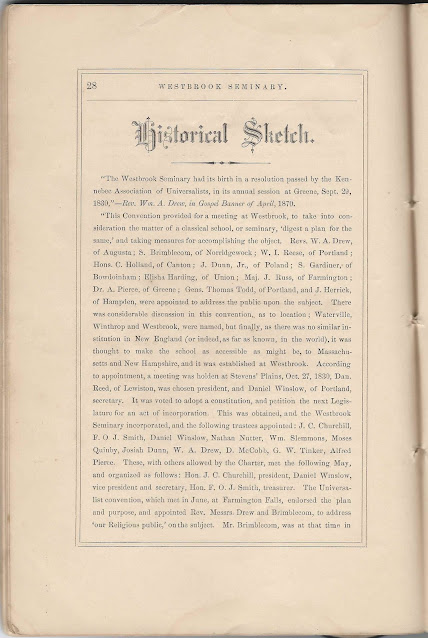 Historical Sketch.
"The Westbrook Seminary had its birth in a resolution passed by the Kennebec Association of Universalists, in its annual session at Greene, September 29, 1830." - Rev. William A. Drew, in Gospel Banner of April, 1870.

"This Convention provided for a meeting at Westbrook, to take into consideration the matter of a classical school, or seminary, 'digest a plan for the same', and taking measures for accomplishing the object.  Revs. W. A. Drew, of Augusta; S. Brimblecom, of Norridgewock; W. I. Reese, of Portland; Hons. C. Holland, of Canton; J. Dunn, Jr., of Poland; S. Gardiner, of Bowdoinham; Elisha Harding, of Union; Maj. R. Russ, of Farmington; Dr. A. Pierce, of Greene; Gens. Thomas Todd, of Portland, and J. Herrick, of Hampden, were appointed to address the public upon the subject.  There was considerable discussion in this convention, as to location; Waterville, Winthrop and Westbrook, were named, but finally, as there was no similar institution in New England (or indeed, as far as known, in the world), it was thought to make the school as accessible as might be, to Massachusetts and New Hampshire, and it was established at Westbrook.  According to appointment, a meeting was holden at Stevens' Plains, October 27, 1830, Dan. Reed, of Lewiston, was chosen president, and Daniel Winslow, of Portland, secretary.  It was voted to adopt a constitution, and petition the next Legislature for an act of incorporation.  This was obtained, and the Westbrook Seminary incorporated, and the following trustees appointed: J. C. Churchill, F. O. J. Smith, Daniel Winslow, Nathan Nutter, William Slemmons, Moses Quinby, Josiah Dunn, W. A. Drew, D. McCobb, G. W. Tinker, Alfred Pierce.  Those, with others allowed by the Charter, met the following May, and organized as follows: Hon. J. C. Churchill, president, Daniel Winslow, vice president and secretary, Hon. F. O. J. Smith, treasurer.  The Universalist convention, which met in June, at Farmington Falls, endorsed the plan and purpose, and appointed Rev. Messrs. Drew and Brimblecom, to address 'our Religious public', on the subject.  Mr. Brimblecom, was at that time in charge of the parish at Stevens' Plains, and was one of the most earnest workers in collecting funds, and pushing the matters of the Seminary toward completion.  He was at that time associate editor of the Christian Pilot, and mentions in the issue of May 23, 1833, 'that the building is now in progress.'  In the spring of 1834, a 'brick building, 37x70, two stories high, with a cupola,' was erected on land generously given by Z. B. Stevens [Zachariah B. Stevens], and O. Buckley, Esq., cost of building about $7000.

"Chiefly through Mr. Weston's untiring efforts, money was raised for building and furnishing Goddard Hall.  He resigned in the fall of 1859.  From that time, the school was under the charge successively of Messrs. C. S. Fobes, S. B. Rawson and G. B. Ames, until Rev. S. H. McCollister, took charge in the spring of 1861.  Under his care, the institution continued to prosper.

"Rev. J. C. Snow, was called, in 1869, and under his wise and energetic administration the school was established upon its present basis.  Hersey Hall and the new dining hall were built, new steam apparatus put in, and other improvements made, to the total amount of $40,000.  Mr. William A. Post came in 1872, and administered affairs ably until his resignation, in the fall of 1873.

"G. M. Bodge, A.M., was called to take charge in the spring of 1874, and the school is greatly prospering under his care.

"The institution provides two courses in the Collegiate Department, and confers the degree of Laureate of Arts, upon all young ladies, who successfully pass examination in a classical course, and Laureate of Science, in the scientific course.  In the Academic Department, Diplomas are granted in two courses, English and College Preparatory.

Details on the Education offered at Westbrook Seminary: (click on an image to enlarge it) 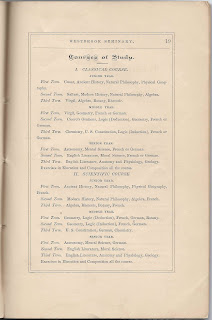 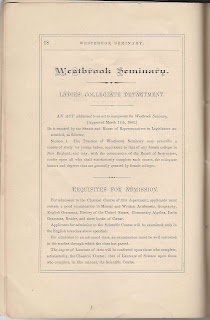 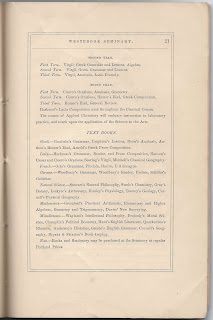 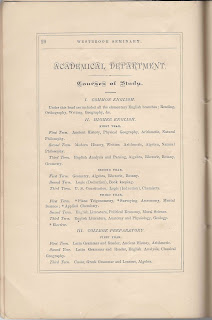 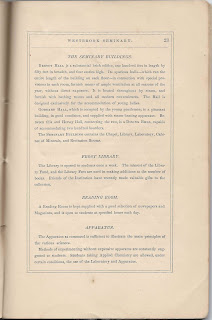 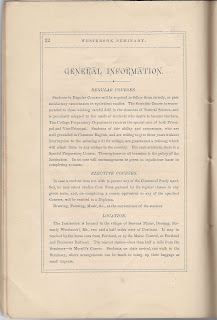 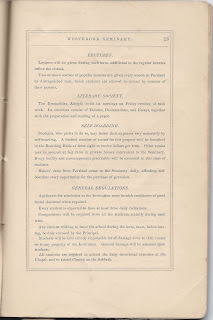 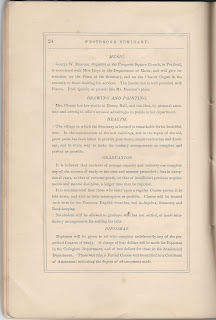 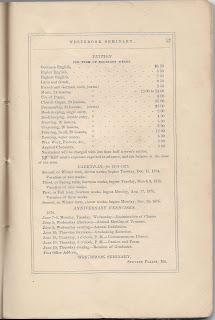 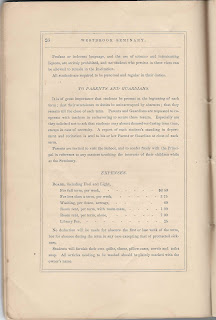 Many pages contain the names of current and former students, too many to list here.  Below, an alphabetical list of the surnames of students, faculty, trustees, etc., with extra information, including residences.  If you notice a surname or surnames you're researching, leave a comment asking for the additional information in the catalogue.