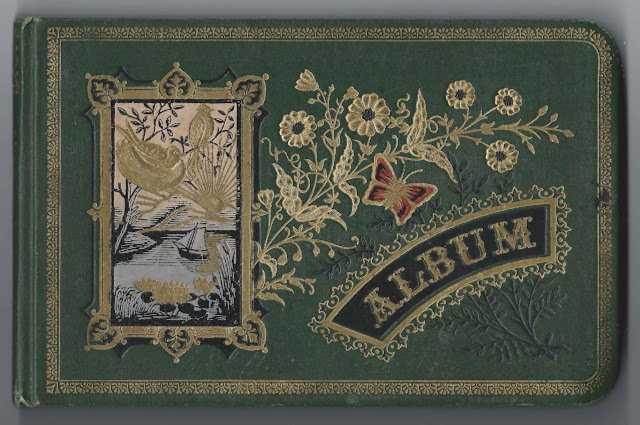 Autograph album that was presented to Van Buren Thorne on April 14, 1883 by his mother, Susannah Mehitable (Keith) Thorne. 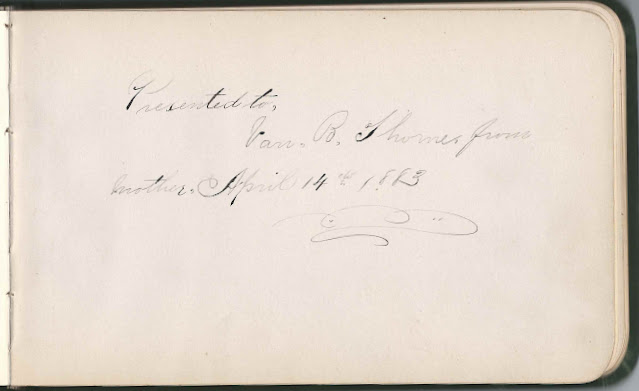 The album is approximately 8" x 6" and contains the sentiments of over 20 relatives, friends and at least one teacher, Frank H. Hayes.
An alphabetical list of the signers appears at the end of this post. 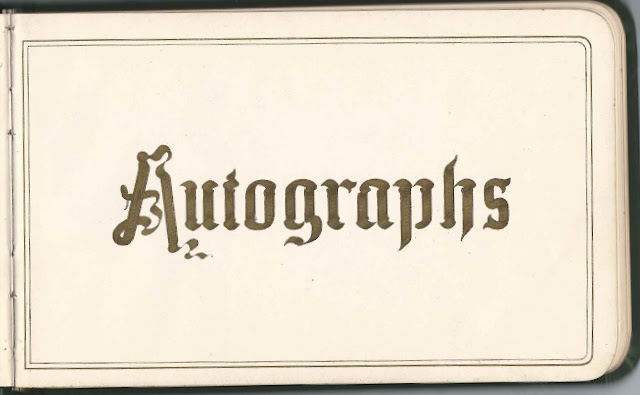 Stella Thorne, his younger sister, signed a page at Sackville, New Brunswick, on September 5, 1894.  Either this Stella was a later child named Stella, or the online references that have Stella as being born and dying in 1879 are incorrect. 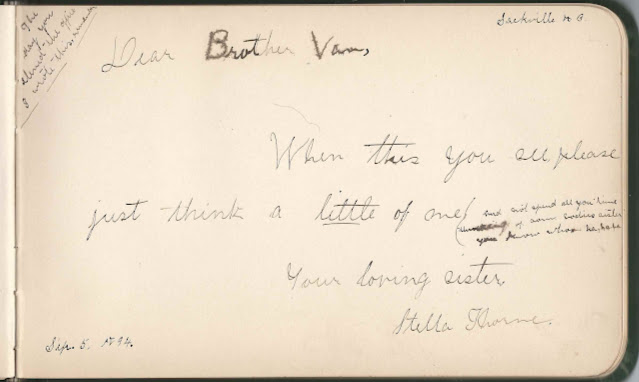 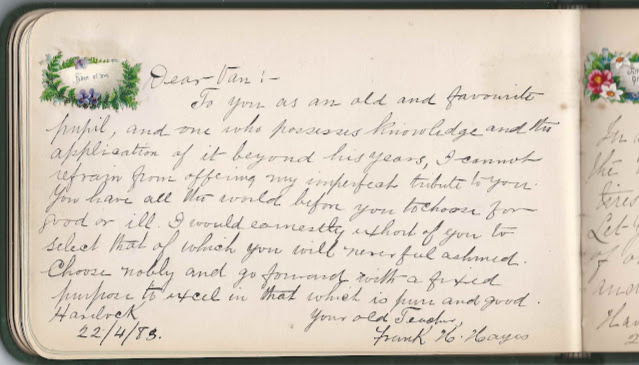 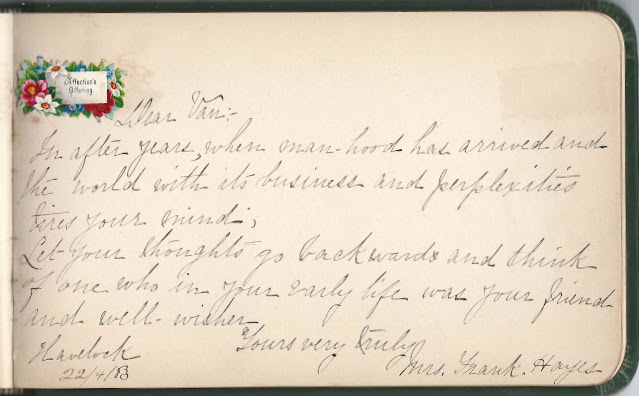 Dr. Thorne graduated from University Medical College in New York in 1896 and was in practice for a time but gave up his practice for a career as a medical and science reporter, eventually for the New York Times.

Interestingly, Dr. Van Buren Thorne's medical notes from 1894 were recently sold on eBay.  They amounted to more than 500 pages of his notes from lectures and clinicals and sketches of people, possibly of some of his professors, who included Thomson, Stimson, Woolsey, Bull, Loomis, LeFevre, Phelps, Fisher, Winters, Guyer, Barnes, Coaxley, Polk, Edgar, and Piffard.

Examples from the notes, with permission from the seller: 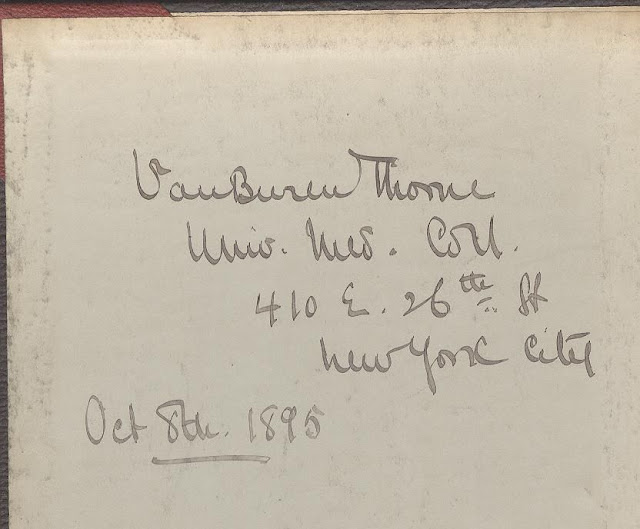 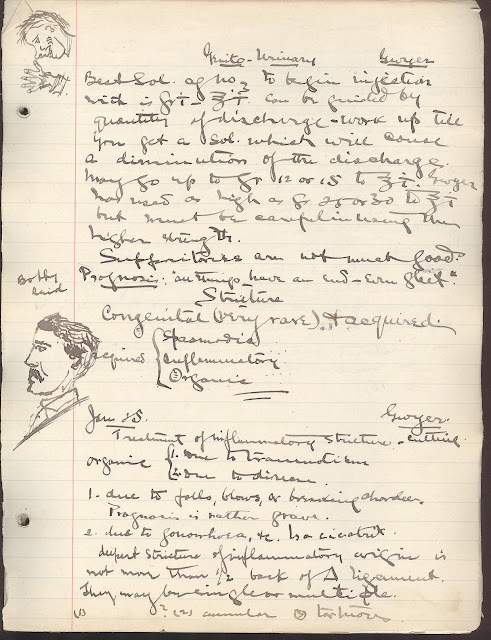 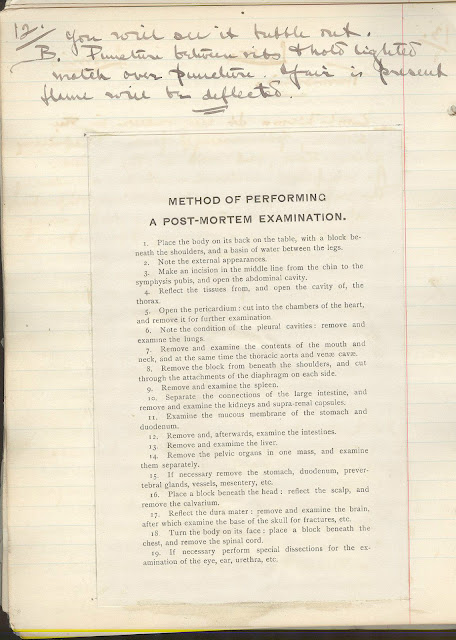 The January 6, 1903 issue of the "Bulletin of the Natural History Society of New Brunswick", contains a reprint of an article originally written for the "New York Sun" by Van Buren Thorne about an encounter with a panther that he and his father had in the Canaan, New Brunswick woods.

The Drs. Thorne were mentioned in an article in a 1904 issue of the Bulletin of the Natural History of New Brunswick regarding a cave near Havelock, New Brunswick.

It may be that in this same formation occurs the cave referred to in the following letter from Dr. B. S. Thorne to Prof. Ganong:
"About one and a half miles from Havelock Corner there is a stream which runs underground for about one mile, and forms 'ice caves.' My son, Dr. Van B. Thorne, a number of years ago, took a line and light and went in about 300 yards, and brought out a large lump of ice in July." He does not state the nature of the rock in which the excavation occurs.

On 15 November 1905 in New York, Van Buren Thorne married May Josephine Kirby, daughter of Dr. Joseph Bassett Kirby and Kate Josephine (Casey) Kirby.  She was born 22 June 1883 in New York City.  Below, an item about their marriage in the "New York Times":

NEW YORK TIMES: November 16th, 1905, Thorne-Kirby: Miss May Josephine Kirby, daughter of Dr. J. Bassett Kirby of  were married to Dr. Van Buren Thorne in the Church of the Paulists at   yesterday at noon in the presence of only a few relatives and friends. Dr. Thorne gave up his practice as a physician to enter newspaper work and is well known among newspaper workers.

Dr. Van Buren Thorne and wife May had, I think, five children.

Dr. Thorne appears in a group photograph, shown below, of the "New York Times" staff in the in the November 4, 1922 issue "The Fourth Estate" 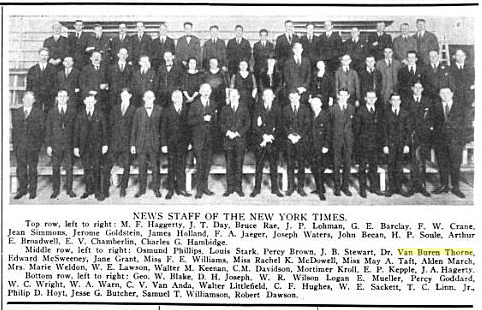