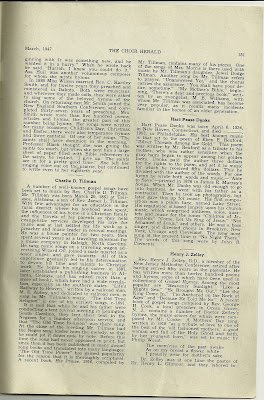 Short biography of Hart Pease Danks included in the March 1947 issue of The Choir Herald. 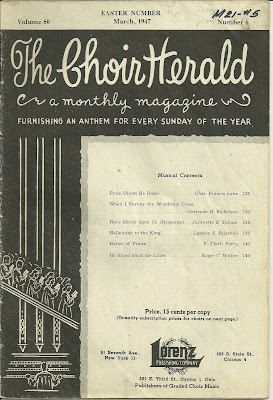 Hart Pease Danks was born April 6, 1834, in New Haven, Connecticut, and died _______ 1903, in Philadelphia.  His best known music is that set to the poem of Eben E. Rexford, "Silver Threads Among the Gold".  This poem was written by Mr. Rexford as a tribute to his mother, who was rather sensitive when the gray hairs began to appear among her golden locks.  Danks paid the author three dollars for the rights to the poem, and set it to music for which he received fifty dollars.  This he divided with the author of the words.  For one hymn he wrote both words and music, --"Able To Save" -- printed in 1876 in James R. Murray's Songs.  When Mr. Danks was old enough to go into business, he went with his father as a contractor.  Then he took up photography, but later gave this up for music.  His first composition was a psalm tune, named Lake Street.  His reputation is based largely upon his church music, which comprised anthems, solos, quartets and music for the songs "Children of Jerusalem", "Come, Let Us Sing of Jesus", "Not Ashamed of Jesus", and others.  He was a bass singer, and directed choirs in Brooklyn, New York, Chicago and Cleveland.  The song most sung at the present time is "No Night There".  The words of this song were by John R. Clements.


From online research, I believe that the father of Hart Pease Danks was Albert Danks, born about 1814 in Massachusetts.  Albert's wife was Mahala, but she may have not have been Hart's mother, but instead Albert's second wife.  There's quite a bit of information about Hart Pease Danks online, but as yet I've found nothing that names his parents.

I found a reference to the wife of Hart Pease Danks as Hattie R. Colahan.   They had several children.