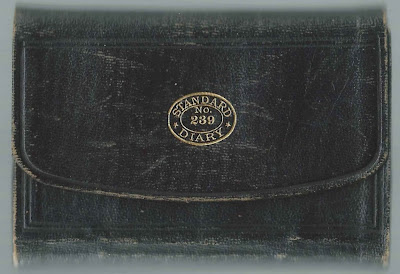 1889 diary of Cora Calista Murdock of Sherman Street, Springfield, Massachusetts.  See all of the pages in the diary at the end of this post. 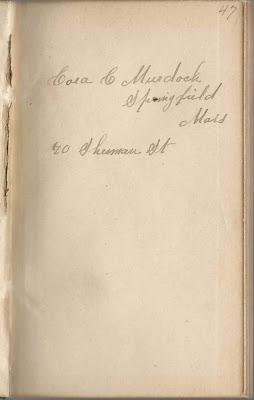 Cora's observations are laconic and deal mostly with the weather and her visits to others and their visits to her family.  There are a few noteworthy entries, though, which describe the good and bad of life in that era.

The diary measures approximately 4-3/4"by 3-1/4" and contains spaces on each page for two days for the 12 months of 1889, plus almanac-type information in the front and pages at the back for Cora to list expenses, letters, notes, etc., some of which she used. 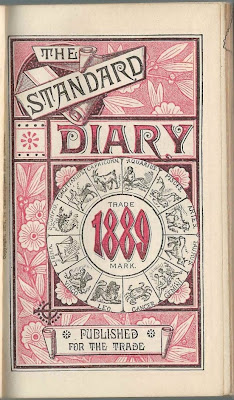 Cora Calista Murdock was February 23, 1853 at Pelham, Massachusetts, the daughter of Emelius Bond Murdock and Phoebe Calista (Chapman) Murdock.   Cora mentioned her birthday in the album. 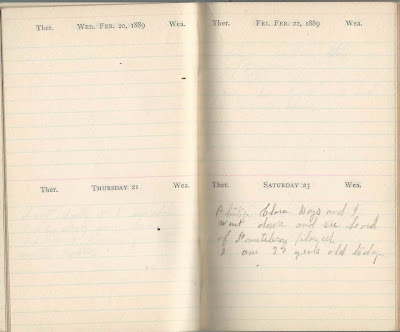 Cora mentioned her siblings Herman Everett Murdock and Clara Maria (Murdock) Potter, wife of Philip Henry Potter, in the diary, especially Clara and her family, and I believe Cora lived with them, at least part of her life.  Cora, whose musings were generally matter-of-fact and not full of detail, made a few observations about a baby, presumably Clara's baby, who was sick, then better, and then sick again.   Then suddenly, the June 2, 1889 entry: "baby died tonight".  "Baby" was William Dimmock Potter, who was born December 23, 1887. 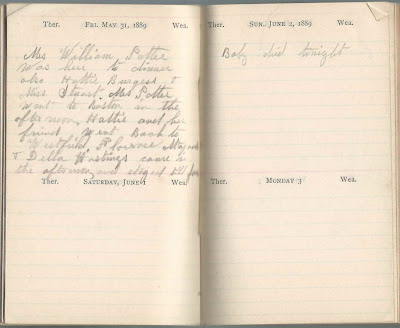 Clara and Philip had, I believe, four or five children, but only two sons survived to adulthood.  Cora mentioned their birthdays in her diary.  Philip Arthur Potter, "Arthur", was born January 8, 1878.  As noted in the diary entry, Clara and her other son Ernest Murdock Potter were born on January 27; Clara in 1855 and Ernest in 1880. 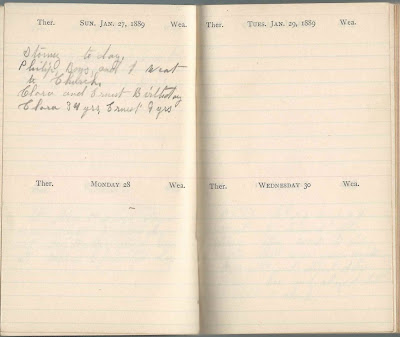 Near the end of the diary, in the section marked "Letters", Cora wrote the birth dates of her family members. 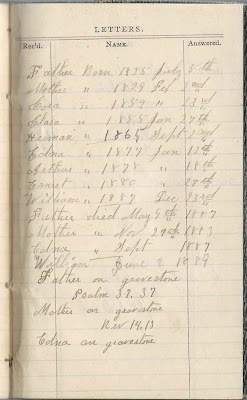 People Mentioned in the Diary