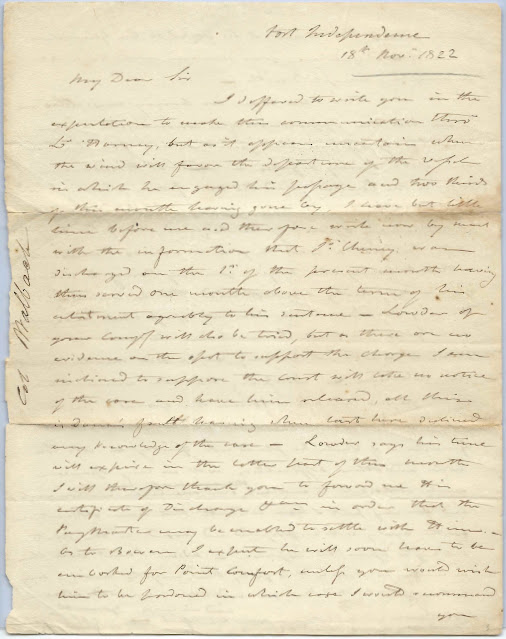 See a transcript at the end of this post [many thanks to those who have contributed].  If you have corrections or additions, please leave a comment or contact me directly - thanks!

The letter discusses the cases of several men charged with military offenses, including Disrespect and Contempt.  Other names appear to be: 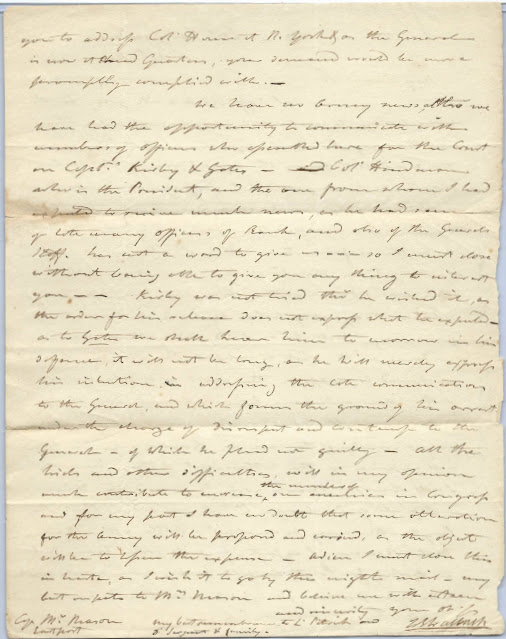 Fort Independence
18th Nov 1822
My Dear Sir
I'd offered to write you in the expectation to make this communication thru Lt. Varney, but as it appears uncertain when the wind will favor the departure of the vessel in which he engaged his passage and two thirds of the month having gone by, I have but little time before me and therefore write now by mail with the information that Joseph Cheney was discharged on the 1st of the present month having then served one month above the term of his enlistment agreeably to his sentence.  Lowder of your company will also be tried, but as there [was ?] no evidence on the spot to support the charge I am inclined to suppose the Court will take no notice of the case and have him released, all this is Davis' fault ___ can't have declined any knowledge of the case - Lowder says his time will expire in the latter part of this month.  I will therefore thank you to forward me his Certificate of Discharge  __ in order that the Paymaster may be enabled to settle with Him.  Or to Bowen.  I expect he will soon have to be embarked for Point Comfort, unless you would wish him to be pardoned in which case I must recommend you to address Col. __ at New York or the General in __ at Head Quarters, your demand would be more promptly complied with.

We have an army now, although we have had the opportunity to communicate with numbers of officers who __ for the Court on Capt. Kirby & Gates - Col. Hindman who is the President, and the one from whom I had expected to receive much news, as he had seen of late many officers of Rank and also of the General's staff, has not a word to give us - so I must close without being able to give you anything to interest you.  Kirby was not tried tho he wished it, as the order for his release __ not express what he expected - as to Gates we shall have him to _ in his _, it will not be long, as he will merely express his intention in addressing the late communication to the General, and which forms the ground of his arrest.  and on the charge of Disrespect and Contempt to the General - of which he plead not guilty - all the trials and other difficulties, will in my opinion much contribute to convince the minds of our enemies in Congress and for my part I have no doubt that some attention for the Army will be proposed and carried, as the object will be to explain the expense.  Adieu, I must close this in haste, as I wish it to go by this night's mail - my best respects to Madame Mason and believe me with esteem and sincerity, your obedient servant J. B. Walbach.
My best remembrance to Sargent and family
To] Monsieur Mason, Eastport
My best remembrance to Lt. Patrick and & Sargent and family.

Posted by Pam Beveridge at 8:37 AM