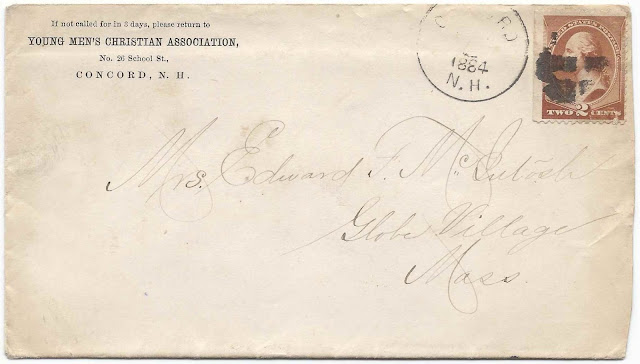 I found at least two places in Massachusetts called Globe Village, one at Southbridge and the other at Fall River.  However, since the couple were married at Southbridge, I'm presuming that Mrs. McIntosh was at Southbridge at the time the letter was written.

The writer appears to be working with the Temperance movement.  Some years later, he would enter Yale Medical College where he received his medical degree in 1897.

A transcription follows each page.  If you're able to fill in the blanks or if you feel that I interpreted a word incorrectly, please leave a comment or contact me directly so that I can correct it.

May 2nd/84
My Dear Wife,
I feel to much the privilege - "I am monarch of all I survey" from the parlor all through to the cellar, "my right there is none to dispute", and that is the worst of it.  "I would not prevail against you" this morning.  The house seems large and empty, especially when I came home last evening at 10:30.  I spent the evening after the Young Men's meeting with Mr. Fiske and was greatly interested in old manuscripts of old colonial times which he showed us.  They once belonged to Rev. Timothy Walker.  Mr. Fiske invited me to 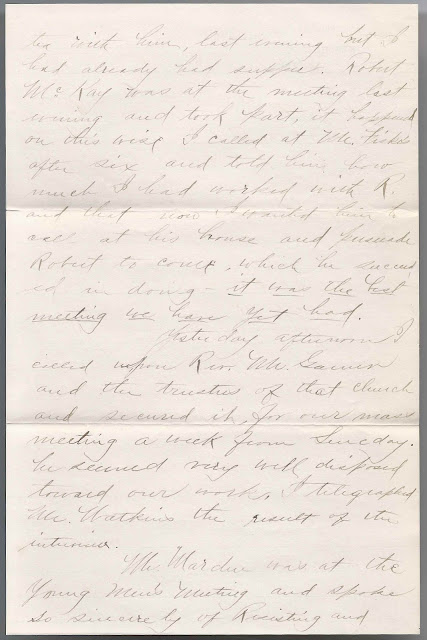 tea with him last evening but I had already had supper.  Robert McKay was at the meeting last evening and took part.  It happened on this wise.  I called at Mr. Fiske's after six and told him how much I had worked with R. and that now I wanted him to call at his house and persuade Robert to come, which he succeeded in doing.  It was the best meeting we have yet had.

Yesterday afternoon I called upon Rev. Mr. Garner and the trustees of that church and secured it for our mass meeting a week from Sunday.  He seemed very well disposed toward our work.  I telegraphed Mr. Watkins the result of the interview.

Mr. Marden was at the Young Men's meeting and spoke so sincerely of Resisting and

____ the spirit.  Mr. Fiske partially broke down with excess of feeling, while making prayer, and two others could hardly in testimony and prayer finish their work, there was such an overwhelming sense of the presence of the spirit, it was indeed one of the richest experiences of my Christian life.

"Though absent not forsaken".  Mrs. Sanders supplied me with a bountiful supply of breakfast, and I am receiving such things as she can supply.  I didn't sleep very well last night and awoke early this morning with no back comforts or any

other kind of comfort (except lowly ones).  I will send papers with trial in them so you can see how they are coming out.

Tell mother that her wish is the only thing on earth that would persuade me to allow you to be drawn from me in this way, but I think I can get through if you don't stay too long.  I look for a letter today.  Have a good time and then come back to Ted.

Hattie had previously been married to photographer Horatio Davis Moulton, son of Joseph C. and Susan (Park) Moulton of Fitchburg, Massachusetts.  Horatio and Hattie had a son George D. Moulton born in 1873.  Apparently the marriage of Hattie and Horatio ended in divorce.

Edward and Hattie had three daughters: