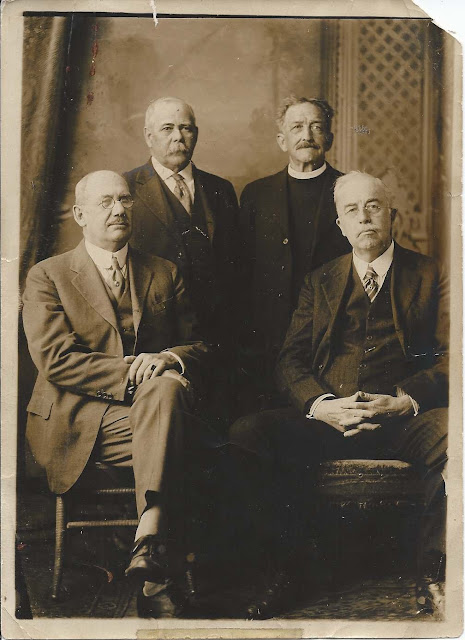 Vintage photograph of four men identified on reverse as:

Since two of the men died in 1930, the photograph had to have been taken that year or earlier. 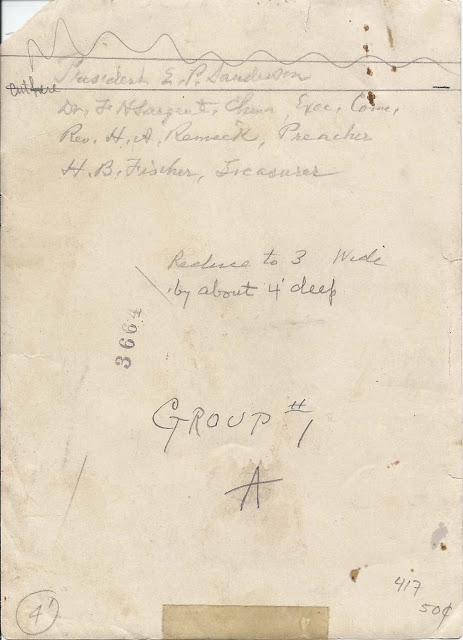 Researching online for a link between these men in order to identify them further, I came across a reference to the Pittsfield, New Hampshire Old Home Day Association.  These men were on the 1919 committee, though the photograph may have resulted from their participation in another year's festivities.

Edward Parkman Sanderson [his middle name may have been Parkham] was born at Pittsfield, New Hampshire, on 5 February 1860, son of Daniel Parkman Sanderson and Elizabeth C. (Norris) Sanderson.  He was a banker and manufacturer in the Waltham, Massachusetts, and became a great benefactor of his home town of Pittsfield, New Hampshire.  He married Evelyn S. Harrington in 1886; they had at least one child, a son Robert.  Edward P. Sanderson died at Tennessee on 1 April 1930.

Dr. Frank H. Sargent was born 31 October 1861 at Pittsfield, New Hampshire, son of Charles H. and Almira (Ring) Sargent.  He married Nellie Winslow in 1898.  Dr. Sargent practiced medicine at Pittsfield, New Hampshire and was the owner of a large farm.  He founded Sargent Hall, a sanitarium dedicated to the treatment of people suffering from addictions to alcohol, tobacco and narcotics.  Dr. Sargent died in 1944.

Herbert B. Fischer was born about July 1873 at Chichester, New Hampshire, son of Anson B. and Caroline F. (Cutler) Fischer.  He married Clara Helen Goss on 3 November 1900; they had at least two children.  Clara died in 1906.  Herbert subsequently married Ethel W. Kendall.  Herbert died in 1946.

Posted by Pam Beveridge at 1:36 PM