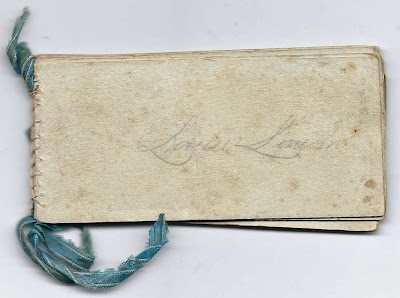 Handmade autograph album that belonged to Louise Lincoln, with pages signed in 1878, possibly from people associated with the Carpenter family's straw manufacturing complex at Foxborough, Massachusetts.

Louise's name is shown on the front cover, above.  The album is approximately 4-1/2" x 2-1/4" inches and contains 26 pages signed by people who identified themselves and some who did not.  An alphabetical list of the signers appears at the end of this post.

Thanks to reader Ed [see his comment below], I believe Louise may have been Louisa Lincoln, daughter of Emerson and Patience (Hathaway) Lincoln, who were born at Raynham, Massachusetts, and Dighton, Massachusetts respectively.

Louisa was born 10 October 1846 at Raynham, Massachusetts.  She had two sisters and two brothers.  Louisa died at Dighton, Massachusetts, in 1924.  I don't believe she ever married.

The photograph below was found with the autograph album but I have no way of knowing if the unidentified woman was Louisa Lincoln, another worker at the straw company, a Lincoln relative or a completely unrelated person.  There's nothing on the reverse of the photograph. 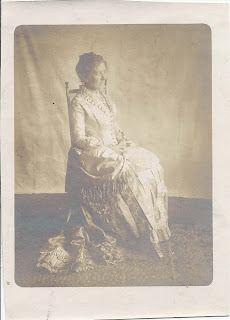 Many pages indicate that they were signed at the "Sewing Hall".  Fortunately, one page included "Hamlet Hall", so I was able to make the connection to the O. & W. Carpenter manufacturing facility.  Hamlet Hall was built in 1845 to serve as a combination sewing house and dormitory for the young ladies who were attracted to the employment there.

Read about the Hamlet House and see a photograph here in Foxborough: Gem of Norfolk County, by Jack Authelet of the Foxborough Historical Society, by entering "Hamlet House" in the search box.

As shown in Ed's comment below, Louisa's sister Florence also worked at the straw shop.

Several of the women who signed pages in Louise's album gave Maine as their address.  Others came from Foxborough and other towns in Massachusetts.

Maria E. Conant of Winterport, Maine, signed a page at Foxboro, Massachusetts in 1878.

M. Louise Sawtelle of Sidney, Maine, signed a page at Foxboro, Massachusetts, in 1878.

Kate Gleason of Foxboro, Massachusetts, signed at page at the Sewing Hall in 1878.

Leland Merrill wrote his name vertically on the page signed by Ella C. Merrill of Taunton, Massachusetts in 1878.

Albert E. Pond signed a page at the Music Hall.

If you have a theory as to the identity of Louise Lincoln or insights into the Hamlet House of the Carpenter straw manufacturing complex or into any of the signers listed below, please leave a comment or contact me directly.  Thanks!

Complete list of signers, in alphabetical order: [Note: given names within a specific surname may not be in alpha order.]

Posted by Pam Beveridge at 2:34 PM