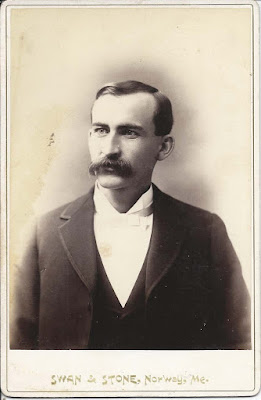 Cabinet photograph of a man identified on reverse as Bert Kilgore.  The photograph was taken by the Swan and Stone studio of Norway, Maine. 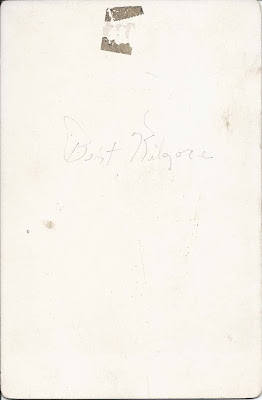 I believe the man in the photograph is Adelbert D. Kilgore who was born at Hartford, Maine, on 25 May 1858, son of Joshua Dennett Kilgore and Cynthia (Eames) Kilgore.  I found photographs of him at an older age when his mustache was in its silver prime.  His middle name may have been Donald.

Adelbert was married at least three times.  On 28 August 1883 he married Lizzie Adams, daughter of Sylvester and Louisa (Paule) Adams of Stoneham, Massachusetts.  They had at least three children: