1880s autograph album that I believe belonged to Ruby Brown of Unionville Center, Ohio, judging from the clues of three signers who declared themselves to be Ruby's cousins.

My hesitation is that many online trees don't show Ruby as a girl, but rather as Reuben Wright Brown; one tree, however, had both Reuben and a Ruby, born a couple years later, so I'm hoping that tree is correct. 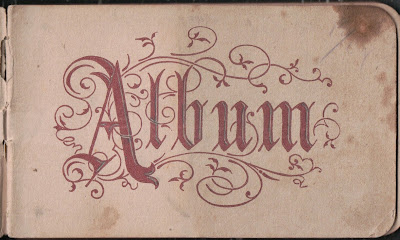 At first, before researching the cousins, I found a Ruben Nathaniel Converse from Ohio who might have fit the bill, as there are people by the name of Converse who signed pages in the album.  That possible Ruby, however, was a man, and at least one of the pages in the album, signed by Hamer Maddex in 1884, implies that Ruby was a girl. 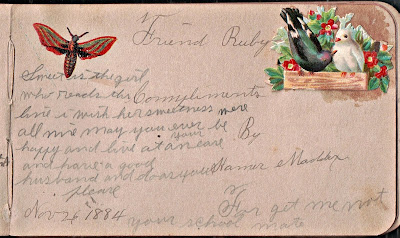 The album is approximately 5" x 3" and is missing half of its front cover and half of its back cover.  It contains about fifty pages signed by Ruby's relatives and friends.  A complete list of the signers, in alphabetical order, appears at the bottom of this post.

Ruby Brown was born about 1873 in Ohio, daughter of Andrew and Nancy E. (Valentine) Brown, both born in Ohio.   Her paternal grandparents were Andrew and Mary (Jolley) Brown.

There's a page in the album signed by Ruby's cousin Jolley Martha of Marysville, Ohio.   She may have been in the habit of reversing her names, for effect. 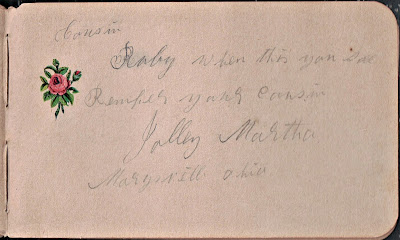 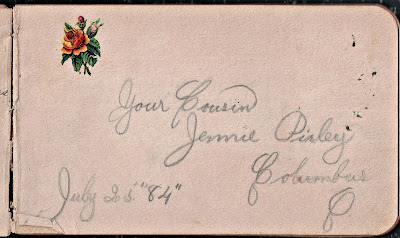 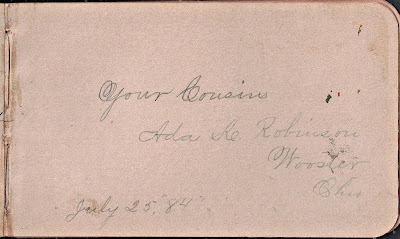 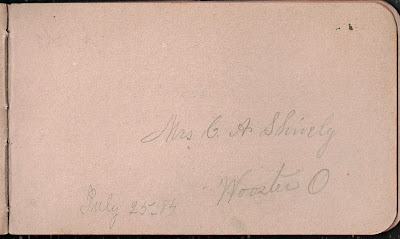 If you have information on the Ruby who owned this autograph album, especially if you feel she is someone other than Ruby Brown, please leave a comment or contact me directly, so that I can make corrections.

I'd also appreciate hearing from you if you have information on any of the signers listed below.

Complete list of signers in alphabetical order by surname [Given names within a particular surname may not be in alpha order.]