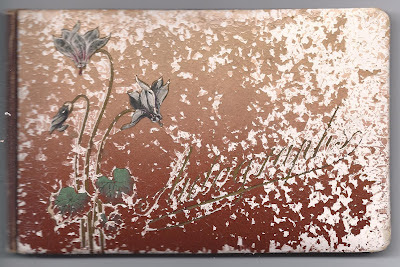 Autograph album with dates from 1902 to 1930, with pages signed by  Coolidge family members and four others, from the Jay, Maine, area. 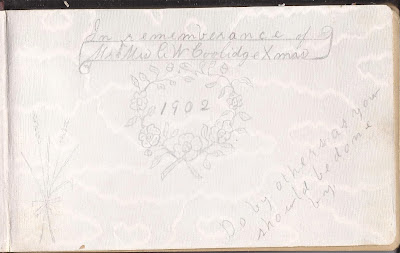 Augustus married Sarah Eastman Norton on 12 June 1854, according to a brief section on her father and mother, Warren and Sarah Almira (Pottle) Norton in A History of the Town of Industry: Franklin County, Maine, from the Earliest, by William Collins Hatch, 1893.

Augustus and Julia had two children:


The next page in the album was signed by Alice Lucile Coolidge of North Jay, Maine, in 1929.

Alice was born 9 December 1919 at Dixfield, Maine, the daughter of Adelbert C. and Lillian Alice (Simmons) Coolidge.  Alice was not a direct descendant of Augustus Wyeth Coolidge, at least not on the paternal side.

Alice signed another page in the album in 1930:

Alice father, Adelbert Clinton Coolidge, signed a page in the album in 1910.  He was born 9 March 1887 at Dixfield, Maine, son of Clinton Enoch Coolidge and wife Annie Mary (Porter) Coolidge, who were born at Errol, New Hampshire, and Andover, Maine, respectively.

Tena Belle Simmons of North Jay, Maine, who was the sister of Alice's mother Lillian (Simmons) Coolidge, signed a page in 1910.

Because Lillian (Simmons) Coolidge didn't sign a page, I wonder if the album were originally hers.  She was born 15 May 1888 at North Jay, Maine, daughter of Gilbert and Rose E. (Paine) Simmons, who were born in Canton, Maine, and Jay Bridge, Maine, respectively. 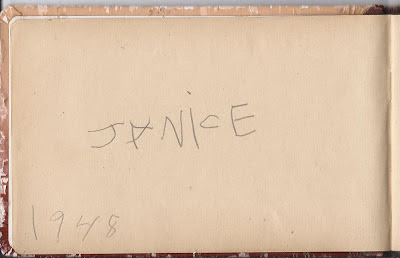 If you have corrections or additions to the information presented here, or insights into any of the signers, please leave a comment.  Thanks!

Back cover and spine 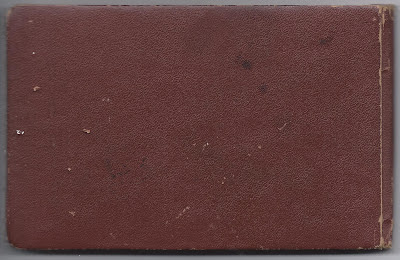 Map of the Jay, Maine area