1888 Letter from J. A. Nickerson in Norway, Maine, inquiring about a Pony for his Children 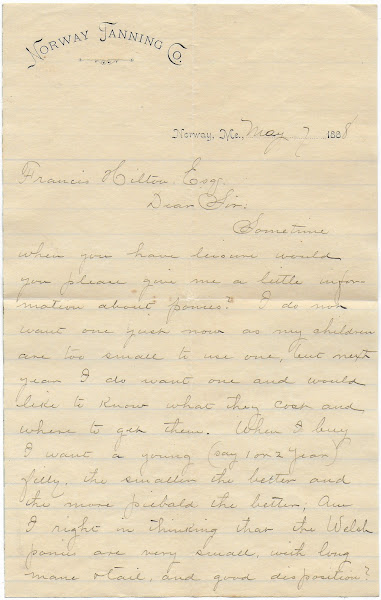 May 7, 1888 letter to Francis Hilton, Esq., from J. A. Nickerson at Norway, Maine, regarding the planned purchase of a pony for the next Spring. Sadly, the envelope, which would have shown where Francis Hilton lived, did not accompany the letter.
At first I thought about how lucky the Nickerson children were!  But when reading that their father wanted a one or two year old, I cringed, as the situation truly calls for a forgiving adult pony with a long, reliable track record.  Hopefully Mr. Hilton weighed in, and the children survived! 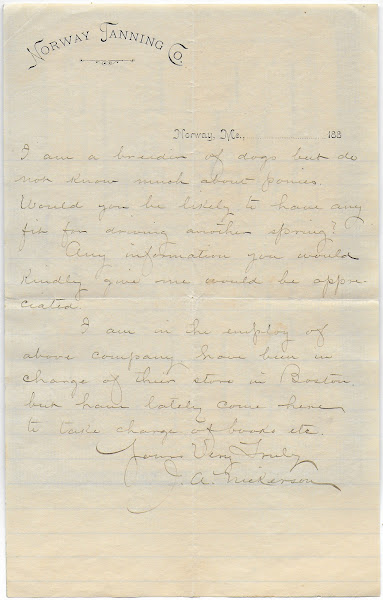 Although J. A. Nickerson was keeping the books at Norway Tanning at the time of the letter, he was presumably the same person who was managing a furniture store at Norway by January 1, 1889, as shown in an advertisement at the bottom of page 2 in the Oxford Democrat, published in Paris, Maine.
J. A. Nickerson may have attended business college, as his handwriting would seem to indicate.
I wonder if he was Joseph Andrew Nickerson (abt 1850, Eastport, Maine - 1908, Malden, Massachusetts), a widower, who was working in Boston as a bookkeeper, as noted in the 1880 Census. His 1871 marriage to Josephine Beckwith had ended with her death in 1874. Their son Joseph, perhaps their only child, appears to have died at or shortly after his birth in 1872.
In 1881, Joseph married Fanny Florence Pratt. They had at least 3 children, born in the 1880s, who fit the age range of the children implied in the letter.
As for the letter's addressee, perhaps Francis Hilton was the farmer Francis Hilton (1844-1913) in Anson, Maine. If you have another candidate, please leave a comment or contact me directly.
If you have corrections and/or additions to the information above, or an alternate theory of the identity of J. A. Nickerson, or an identity for Francis Hilton, Esq, please leave a comment or contact me directly.
Transcription
Norway Tanning Co.
Norway, Me. May 7, 1888
Francis Hilton, Esq
Dear Sir:
Sometime when you have leisure would you please give me a little information about ponies? I do not want one just now as my children are too small to use one, but next year I do want one and would like to know what they cost and where to get them. When I buy I want a young (say 1 or 2 year) filly. The smaller the better and the more piebald the better. Am I right in thinking that the Welsh ponies are very small, with long mane & tail, and good disposition?
I am a breeder of dogs but do not know much about ponies. Would you be likely to have any fit for driving another spring?
Any information you would kindly give me would be appreciated.
I am in the employ of above company, have been in charge of their store in Boston but have lately come home to take charge of books, etc.
Yours very truly,
J. A. Nickerson
Posted by Pam Beveridge at 11:47 AM