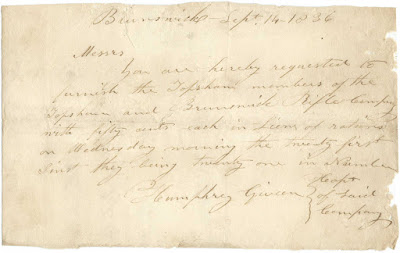 September 14, 1836 letter, shown above, written by Capt. Humphrey Giveen, Captain of the Topsham and Brunswick Rifle Company, asking the Selectmen of Topsham for 50 cents each for 21 men, in lieu of rations.

Reverse of the letter: 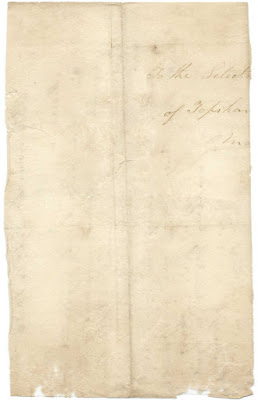 September 1837 letter, shown below, written by Capt. Alvah Jameson, informing the Selectmen of Topsham, Maine, of the rations needed by his fifty-five men. 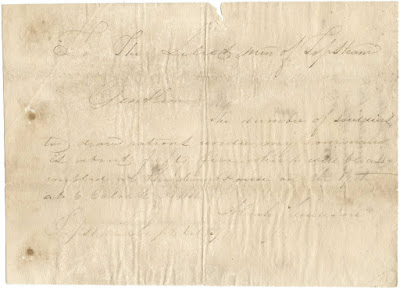 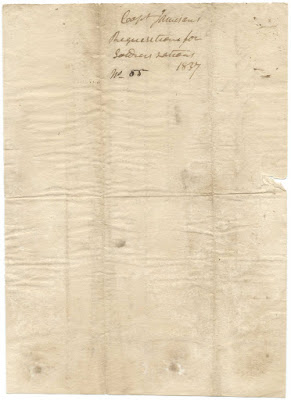 1)  Transcript of the letter written by Capt. Humphrey Giveen:


Brunswick, Sept. 14, 1836
Messrs
You are hereby requested to furnish the Topsham members of the Topsham and Brunswick Rifle Company with fifty cents each in Lieu of rations on Wednesday morning the twenty first inst.  they being twenty one in Number.
Humphrey Giveen, Captain of Said Company

To the Selectmen of Topsham, Maine

2)  Transcript of the letter written by Capt. Alvah Jameson

To the Selectmen of Topsham
Gentlemen
The number of soldiers to draw rations under my command is about fifty five, which will be assembled at the Court House on the 19th at 6 October A.M.
Alvah Jameson

From brief online research, hopefully correct:  records are very sparse and what I found may be in error, so any corrections and clarifications would be appreciated.

Alvah Jameson, who rose to the rank of Colonel, was born September 23, 1809 at Topsham, Maine, son of John Jameson and Mary (Hewey) Jameson.  On June 27, 1849 Alvah married Celia Ann Perkins, daughter of Nahum Perkins and Elizabeth (Lowell) Perkins.  Alvah died on September 4, 1850 aboard the Birmingham, in which he had two shares in the vessel and contents, near or at San Francisco, California, perhaps on a quest in the Gold Rush.  Read more about Alvah Jameson in content provided online by the Topsham Library; scroll down to his name.