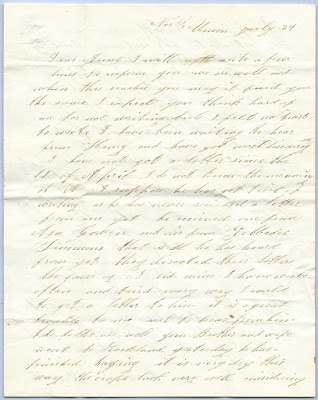 Two mid-nineteenth century letters that Amanda (Pease) Fossett of North Union, Maine, sent to her aunt.  The letters contain family news and describe a controversy in the family over the selling of a farm.

Each letter consists of a double sheet of paper, folded in two, with writing on two panes.  See transcripts and images farther below.   If you notice that I've transcribed something incorrectly, please do not hesitate to provide a clarification.

Amanda (Pease) Fossett was born October 12, 1826 at Appleton, Maine, daughter of Robert and Sarah (Liniken) Pease.  On March 18, 1846 at Union, Maine, Amanda married merchant Henry Fossett, Jr., son of Henry and Margaret Fossett.  Amanda and Henry had at least three children.  It appears that Henry and Amanda both served as postmasters in North Union, Maine, Henry in the 1860s and Amanda starting January 4, 1876.

Each letter consists of a double sheet of paper, folded in two, with writing on two panes.  See transcripts and images farther below.

Names/places in Letter #1, dated July 24 [no year written] at North Union, Maine; it seems to the the older of the two.
Names/places in letter #2, dated February [no day or year]; with an addition written about a week later, Amanda noted; she dated the addition Feb. 28, though I'm not sure of the day.
I'm hoping that readers with knowledge of the families of the Union, Maine, area, will make sense of the clues provided in the letters and be able to identify some of the other people mentioned. 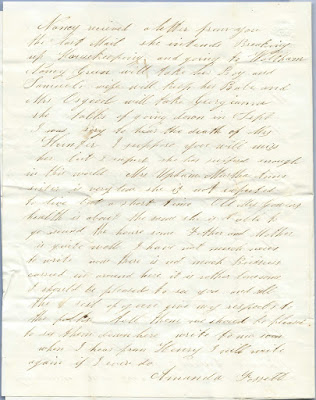 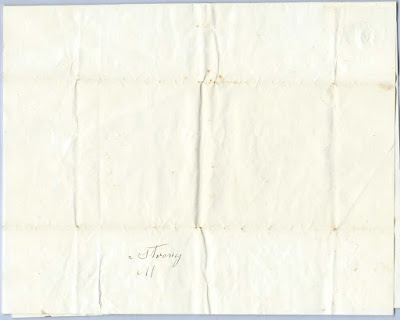 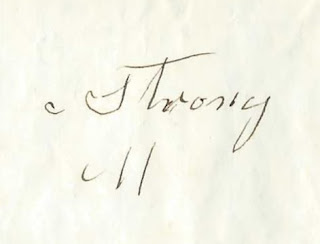 North Union, July 24
Dear Aunt,
I will write a few lines to inform you we are well and when this reaches you may it find you the same.  I expect you think hard of me for not writing but I felt no heart to write.  I have been waiting to hear from Henry and have got most discouraged.
I have not got a letter since the 18 of April.  I do not know the meaning of it.  I suppose he has got tired of writing as he has never received a letter from me yet he received one from Asa Gowen and one from Zebbedee Simmons that is all he has heard from yet.  They directed their letters the same as I did mine.  I have wrote often and tried every way I could to get a letter to him.  It is a great trouble to me not to hear from him.  The folks are well.  Your Brother and wife went to Rockland yesterday.  He has finished haying.  It is very dry this way.  The crops look very well considering.  Nancy received a letter from you the last Mail.  She intends Breaking up Housekeeping and going to Waltham.  Nancy Green will take her Boy and Samuel's wife will keep her Babe and Mrs. Osgood will take Georgianna.  She talks of going down in September.  I was sorry to hear the death of Mrs. Hunter.  I suppose you will miss her but I expect she has suffered enough in this world.  Mrs. Upham, Martha Ames' sister, is very low.  She is not expected to live but a short time.  Old Mrs.  Gowen's health is about the same.  She is able to go around the house some.  Father and Mother is quite well.  I have not much news to write now.  There is not much Business carried on around here.  It is rather lonesome.  I should be pleased to see you and all the rest of you.  Give my respect to the folks.  Tell them we should be pleased to see them down here.  Write to me soon.  When I hear from Henry I will write again if I ever do.
Amanda Fossett 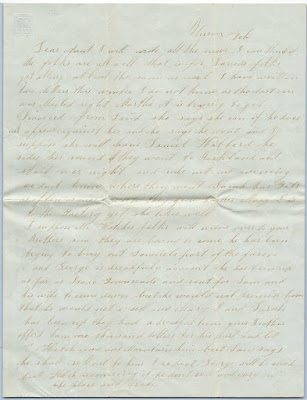 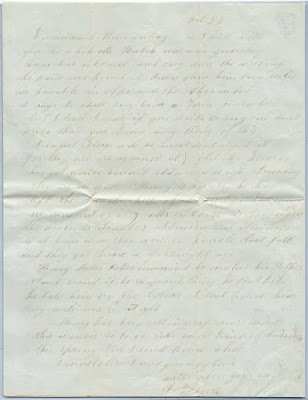 Union, Feb.
Dear Aunt,
I will write all the news I can think of.  The folks are all well.  That is for David's folks get along about the same as usual.  I have written two letters this winter.  I do not know as the last one ever Mailed right.  Martha A is trying to get Divorced from David.  She says she can if he does not appear against her and he says he won't, and I suppose she will have Daniel Hibberd.  He rides her round.  They went to Rockland and stayed over night and rode out one evening.  We  don't know where they went.  Sarah has fits as often as once a week.  They grow harder.  Mary E. is to the Factory yet.  She likes well.  I suppose Mr. Hatch's folks will move over to your Brother's soon.  They are bound to come.  He has been trying to buy out Samuel's part of the farm and George is dreadfully against.  He has been up as far as Isaac Townsend's and sent for Sam and his wife to come down but he would not promise him that he would not sell and Mary, I and Sarah has been up.  They had a dreadful time.  Your Brother offered Sam one thousand dollars for his part and let [?] Hatch come and maintain him but Sam says he shall sell out to him.  I expect George will be mad but Hatch is coming if he don't sell and carry on the place and trade.
Feb 28 [?]
I commenced this a week ago so I will write you the whole.  Mr. Hatch was over yesterday.  Sam has sold out and they done the writing.  He paid one hundred down, gave him two notes, one payable in April and the other in Oct.
S says he shall buy him a Farm somewhere but I don't know.  If you write to anyone don't write that you know anything of this.  I expect George will be most dead about it for they are all against it.  Old Mrs. Gowen has got quite smart.  Nancy was up Sunday.  They are all well.  Henry is well.  He has left the handkerchief off of his eye but can see more out of it.  Mr. Stone is to Augusta this winter as Senator.  Elmira and Augusta is at home now.  They went to Lowell last fall and they got home a fortnight ago.
Henry Miller takes command.  He makes his Father [?] sound if he says anything he don't like.  He take him by the Collar.  I don't know how they will make it yet.
Henry has been getting up more wood this winter so to go into some kind of business this spring but I don't know what.
I must close.  I send you my love.
Write when you can.
A Fossett

Posted by Pam Beveridge at 3:35 PM