1862 letter from Union Soldier Horatio Richards of Rockland, Maine, then at Alexandria, Virginia, to Friend Back Home 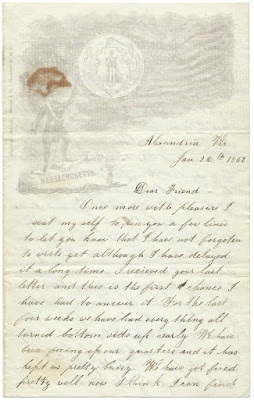 January 26, 1862 letter and enclosure from Knox County, Maine, native Horatio Richards, then at Alexandria, Virginia, and serving, if the information I have is accurate, in the New York 38th Infantry, after initially enlisting in Company D of the 4th Maine Infantry.   Horatio would return to Company D of the 4th  Maine in June 1863, shortly before the Battle of Gettysburg.

The paper has a faint illustration captioned Massachusetts; perhaps Horatio borrowed writing materials from a nearby Massachusetts unit.  There's no envelope with the letter, which is addressed to "Dear Friend".  The letter was directed to someone who shared Horatio's love of song and theater, perhaps to one of his siblings.
Images of the pages and a transcript appear at the end of this post.

Horatio enclosed handwritten lyrics to a song called "Kitty Wells" and promised to send more, including the lyrics to "Let Me Kiss Him for His Mother"; "The Cottage by the Sea"; and comic song "Joe Bowers".  Here's a variant entitled "Katy Wells":

Sadly, Horatio did not survive the war .  After capture, he was imprisoned at Belle Isle, Virginia, where he died on October 15, 1863.  His younger brother John, who may have been the letter's intended recipient, enlisted later on and, tragically, he also died during Civil War service, at Pensacola, Florida, on September 2, 1864.

This letter was purchased some time ago, and it came with many photocopied pages that comprise the lengthy Pension File of Margaret (Maddocks) Richards, based on the service and loss of her two sons, Horatio N. Richards and John E. Richards.   It appears that it took the affidavits of several acquaintances to prove that Margaret had depended on the contributions of her sons for her support during their lifetime.

Also included are copies of two more letters written by Horatio, one to his parents dated May 12, 1862; and one to his brother, dated June 11, 1863, in which he tells of having receiving no pay for a very long period and advising his brother not to enlist, even if he must go hungry and bare-footed.   If brother John E. Richards was the recipient, this is bittersweet indeed, as John did enlist and died in Florida in 1864. 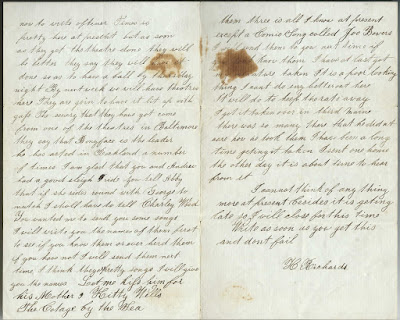 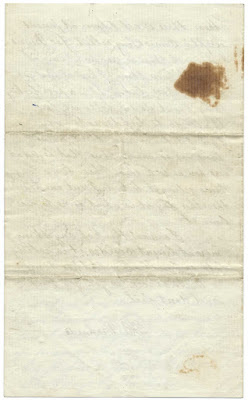 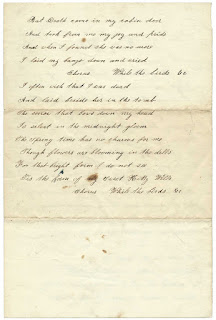 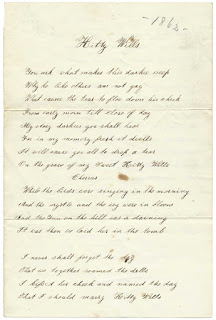 Alexandria Vir.
January 26, 1862
Dear Friend
Once more with pleasure I seat myself to pen you a few lines to let you know that I have not forgotten to write yet although I have delayed it a long time.  I received your last letter and this is the first chance I have had to answer it.  For the last four weeks we have had everything all turned bottom side up nearly.  We have been fixing up our quarters and it has kept us pretty busy.  We have got fixed pretty well now.  I think I can find now to write oftener.  Time is pretty here at present but as soon as they get the theatre done they will be better.  They say they will have it done so as to have a ball by Thursday night.  By  next week we will have theatres here.  They are goin to have it lit up with gas.  The scenery that they have got came from one of the threatres in Baltimore.  They say that Bonyface is the leader.  He has acted in Rockland a number of times.  I am glad that you and Andrew had a good sleigh ride.  You tell Abby that if she rides round with George to [too] mutch [much], I will have to tell Charley Wood.  You wanted me to send you some songs.  I will write you the names of them first to see if you know them or ever heard them.  If you have not I will send them next time.  I think they are pretty songs.  I will give you the names.   "Let me kiss him for his Mother"; "Kitty Wells"; "The Cottage by the Sea".
Them three is all I know at present except a Comic Song called Joe Bowers.  I will send them to you next time if you don't have them.  I have at last got my miniature taken.  It is a poor looking thing.  I can't do any better out here.  I will do to keep the rats away.  I got it taken over in Third Maine.  There was so many there that he did not care how he took them.  I have been a long time getting it taken.  I sent one home the other day.  It is about time to hear from it.
I cannot think of anything more at present.  Besides it is getting late, so I will close for this time.
Write as soon as you get this and don't fail.
H. Richards

Posted by Pam Beveridge at 9:38 AM