1907 Postcard and Letter from George A. Briggs and wife Cora (Skillings) Briggs of Paris, Maine 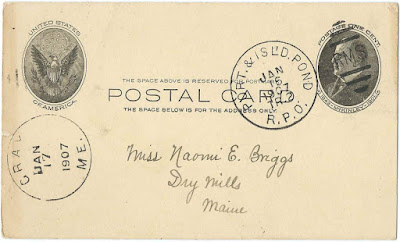 January 1907 postcard, above, from Cora (Skillings) Briggs and March 1907 letter from her husband George A. Briggs at South Paris, Maine, both addressed to George's sister Naomi E. Briggs at Dry Mills, Maine.  Transcript and images farther below. 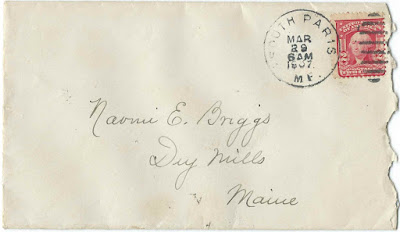 Naomi E. Briggs and her younger brother George A. Briggs were among the children of Samuel Briggs and Mehitable R. (Smith) Briggs of Paris, Maine.  Naomi was born August 29, 1832, and George was born May 13, 1852.  I don't believe Naomi ever married, but George Married Cora Skillings on April 22, 1876 at South Paris, Maine. 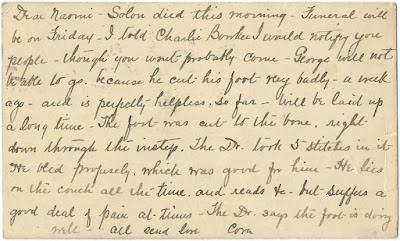 The postcard, above, with a postal marking of January 17, 1907, was written in a nice handwriting by Cora (Skillings) Briggs, presumably a day earlier, on January 16, 1907, the date of Solon Briggs' death, and contains mention of:

Dear Naomi.  Solon died this morning.  Funeral will be on Friday.  I told Charlie Bowker I would notify you people - though you won't probably come.  George will not be able to go because he cut his foot very badly - a week ago - and is perfectly helpless, so far - will be laid up a long time.  The foot was cut to the bone, right down through the instep.  The Dr. took 5 stitches in it.  He bled profusely, which was good for him.  He lies on the couch all the time and reads, etc. - but suffers a good deal of pain at time. The Dr. says the foot is doing well.  All send love, Cora. 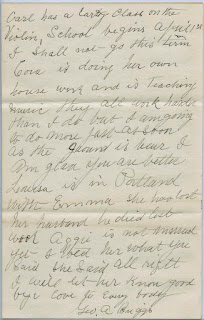 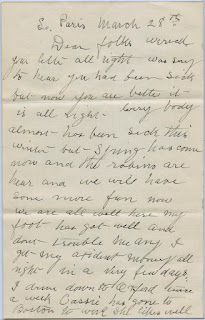 Dear folks, we recd. your letter all right, was sorry to hear you had been sick but now you are better it is all right.  Everybody almost has been sick this winter but Spring has come now and the robins are hear [here] and we will have some more fun now.  We are all well  here.  My foot has got well and don't trouble me any.  I get my accident money all right in a very few days I drive down to Oxford twice a week.  Cassie has gone to Boston work she likes well.  Carl has a large class on the Violin, School begins April 1st.  I shall not go this term.  Cora is doing her own house work and is teaching music.  They all work harder than I do but I am going to do more just as soon as the ground is bear [bare].  I am glad you are better.  Louisa is in Portland with Emma.  She has lost her husband.  He died last week.  Aggie is not married yet.  I told her what you said.  She said all right.  I will let her know.  Good bye, love to every body.
George A. Briggs.


If you have corrections and/or additions to the information above, please leave a comment or contact me directly.

Posted by Pam Beveridge at 4:55 PM