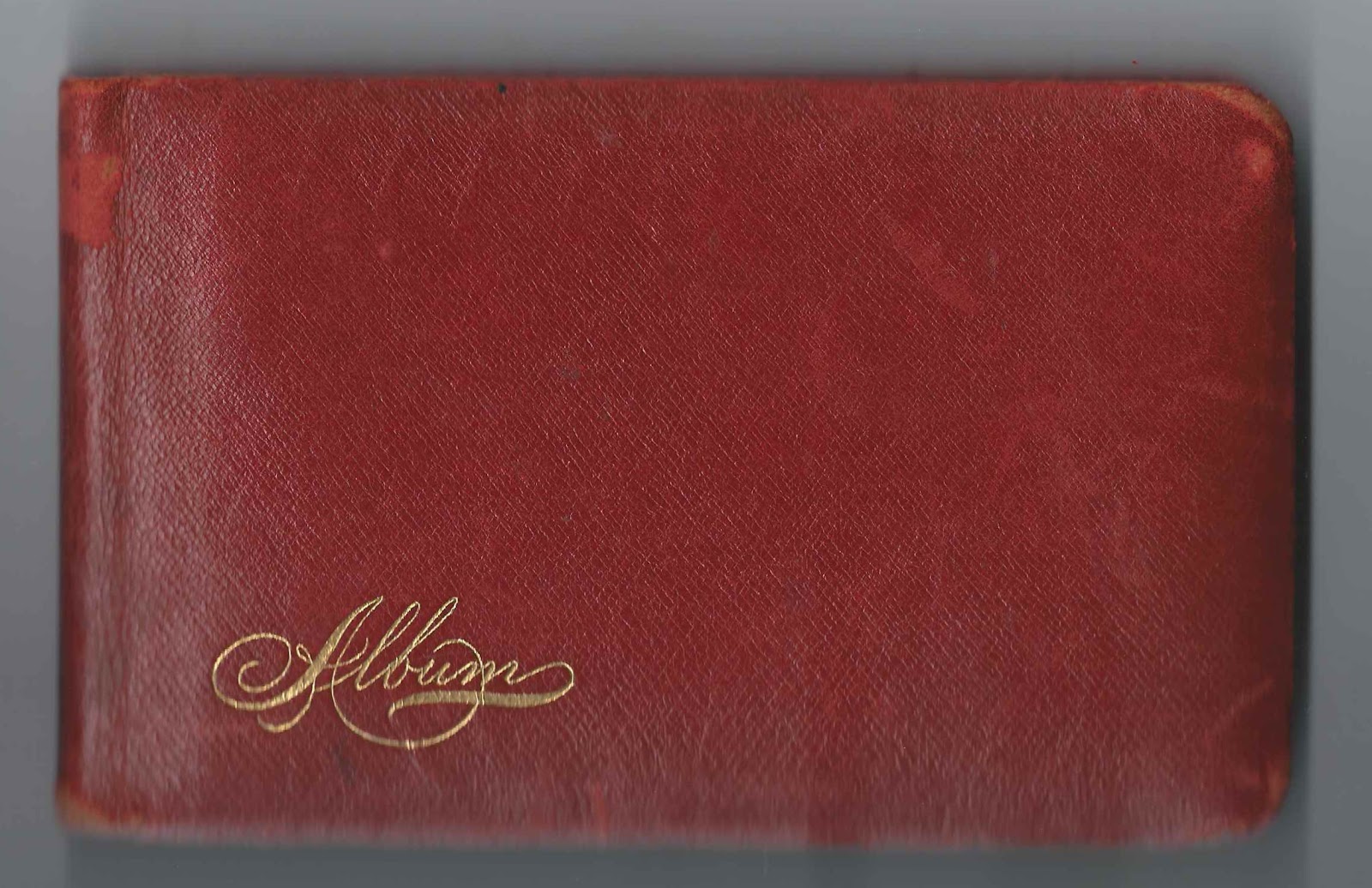 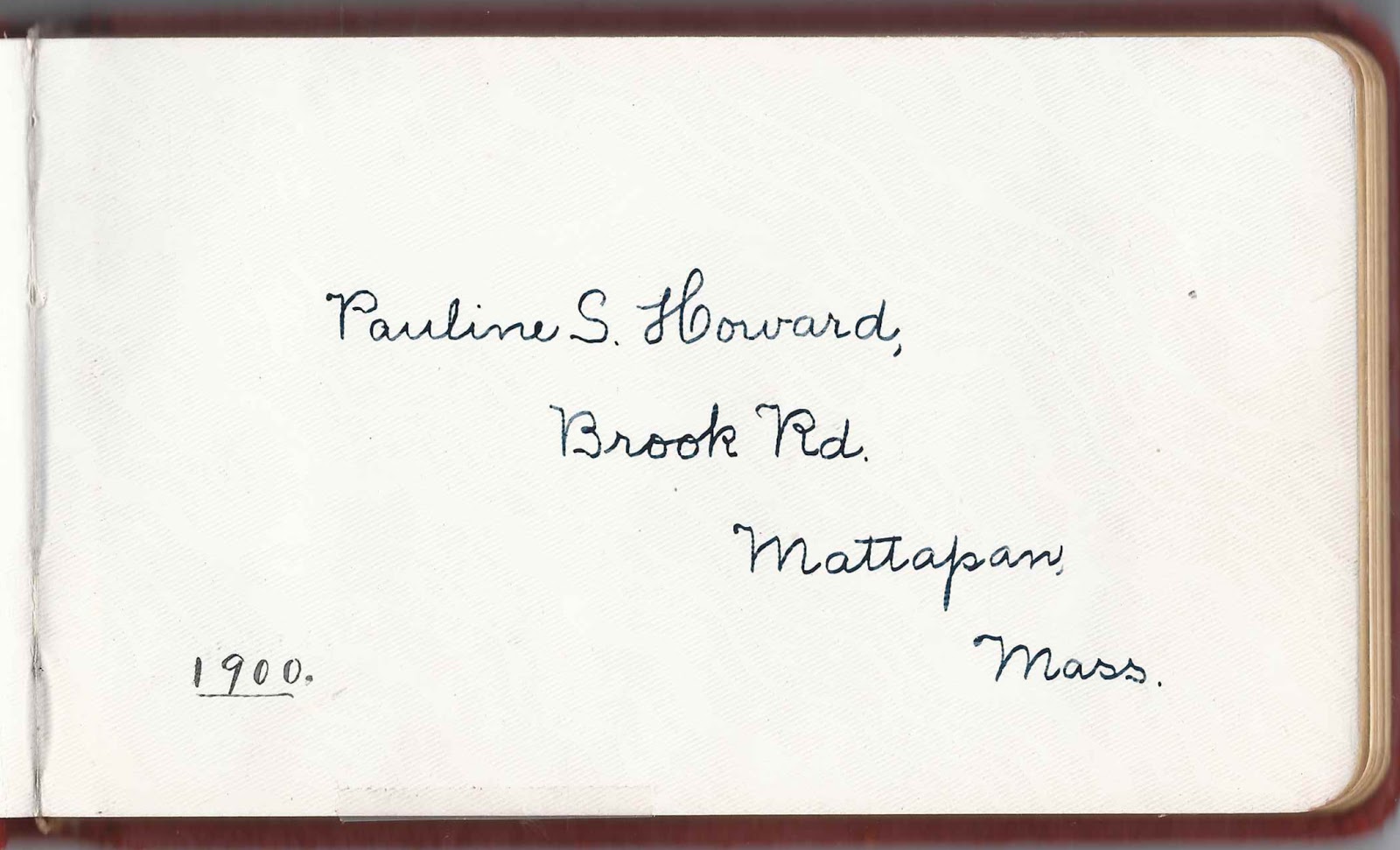 The album was found with two other autograph albums from the 1870s, albums that belonged to Pauline's mother Mary Ellen (Sumner) Howard.  One of those albums is featured here, and the other is featured here.

Pauline's album measures approximately 7" x 4-1/4" and contains the sentiments of over 50 of Pauline's relatives, friends and classmates.  Some indicated they were attending Boston University, and others, S.N.S., which I presume was Salem Normal School, so named at the time.

A few of the pages appear to have been collected as the autographs of "celebrities", such as a professor at the Smithsonian Institute, whose name I can't decipher, and the Governor of New Hampshire, Henry B. Quinby, among others.

One page was signed Mother, but also has the name Alice Carey, who signed the page at Milton, presumably, Massachusetts, on January 5, 1908.  Pauline's mother Mary Ellen (Sumner) Howard was still alive at this time.  Perhaps Alice was a housemother or the mother of a close friend.  The flowers in plastic pasted on the left facing page have a notation that they were acquired at Letham, Scotland, in 1901.

Another page was signed by Hazel E. Howard, who called herself Pauline's "Sister".  I didn't find that Pauline had a sister, so perhaps these two young women were related otherwise or just found themselves, with the same surname, at the same school and affectionately called themselves sisters. 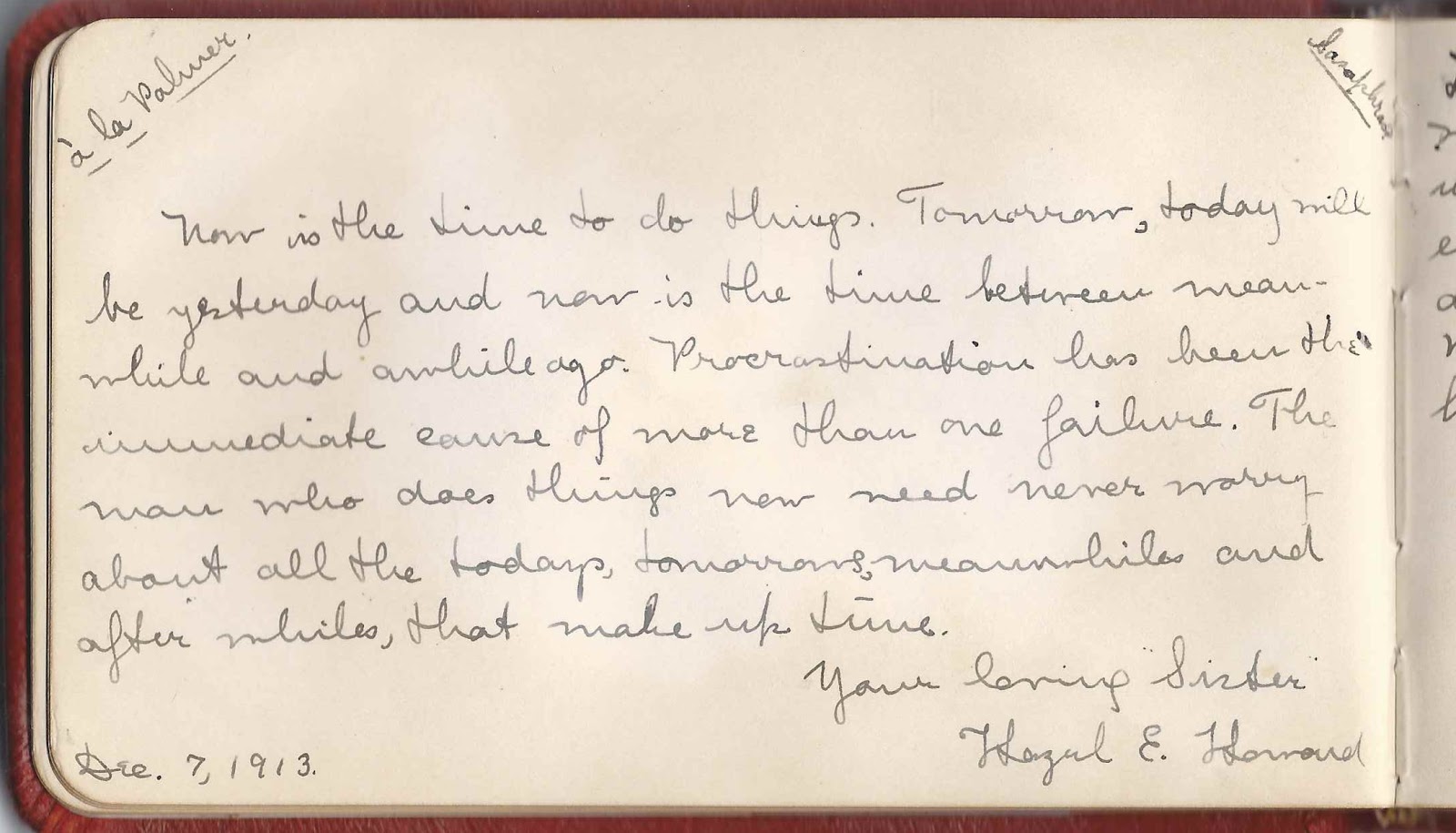 On 20 October 1917, at Milford, New Hampshire, Pauline married Raymond Edward Stimson, son of Edwin/Elwin C. Stimson and Genieve/Geneva H. (Pickering) Stimson.  Raymond was born 3 August 1883 at Hinsdale, New Hampshire.  It appears that Pauline had moved to Amherst, New Hampshire, to teach.
They had, I believe, one child, a daughter.  It was the daughter, I presume, who gave the Mother's Day card that's pasted in the album. 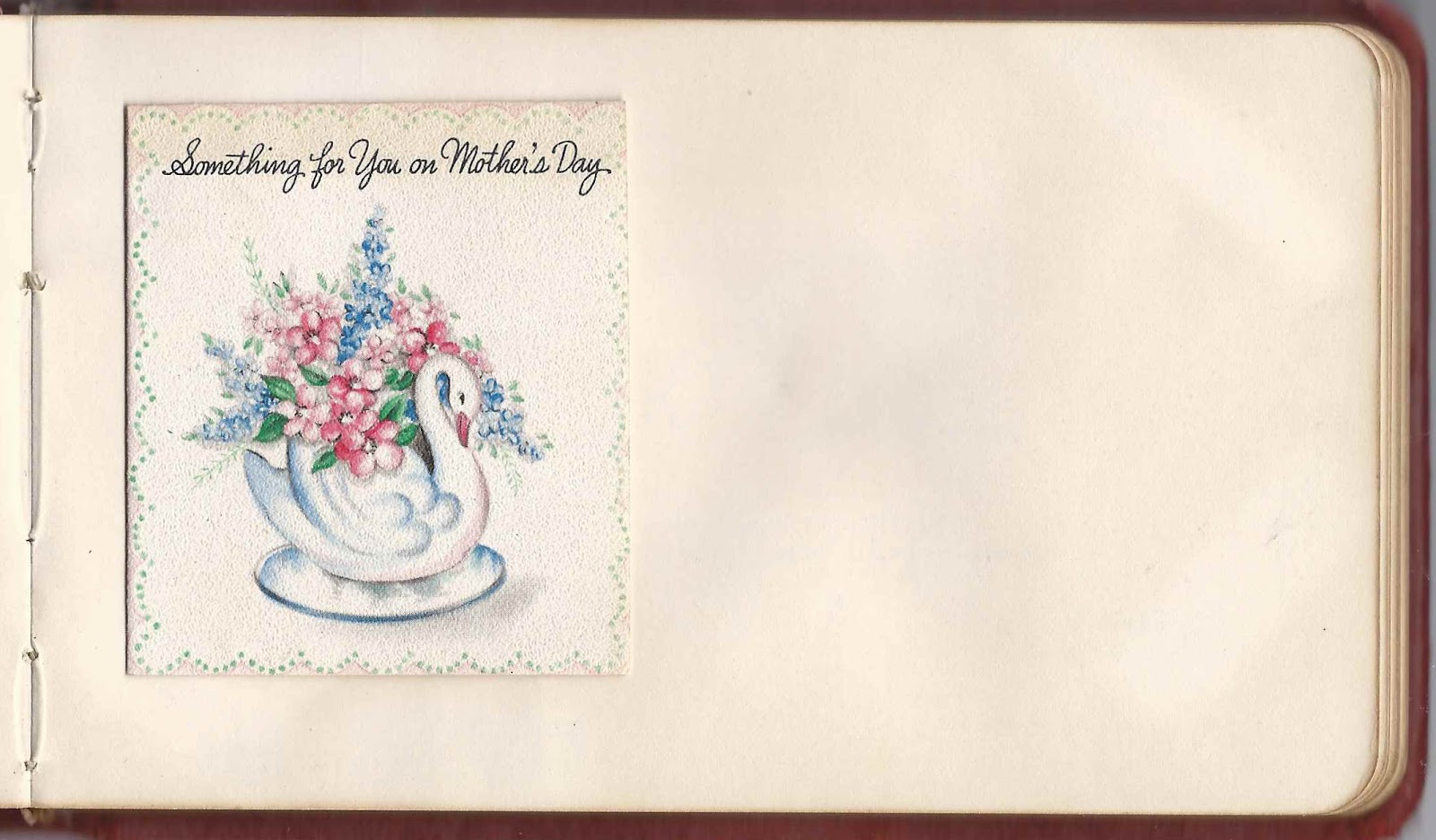 Another interesting feature of the album is that six pages have photographs of the signers pasted on them, either from the beginning by the signer or added as an embellishment by Pauline.  Loella L. Farmer signed a page on May 26, 1913. 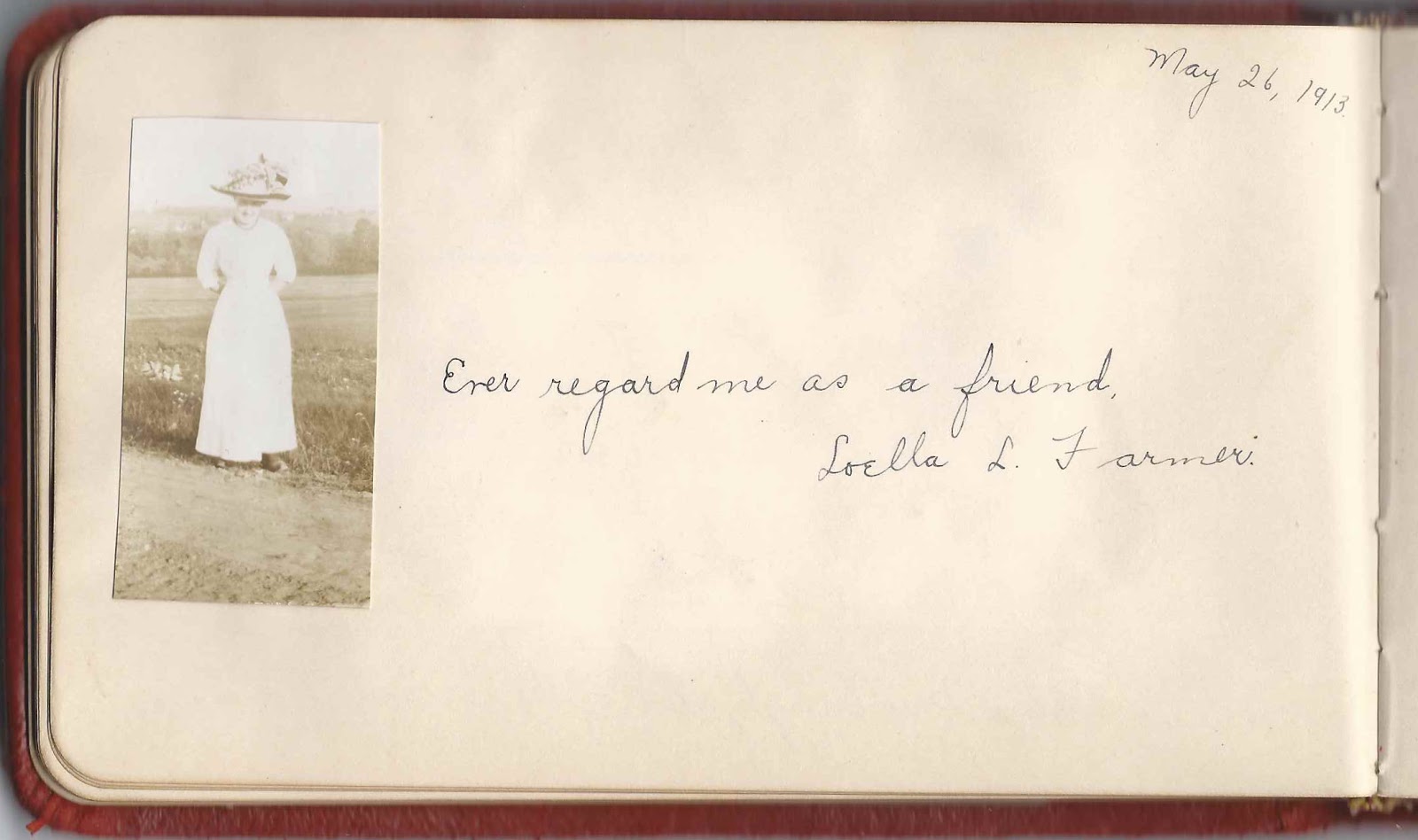 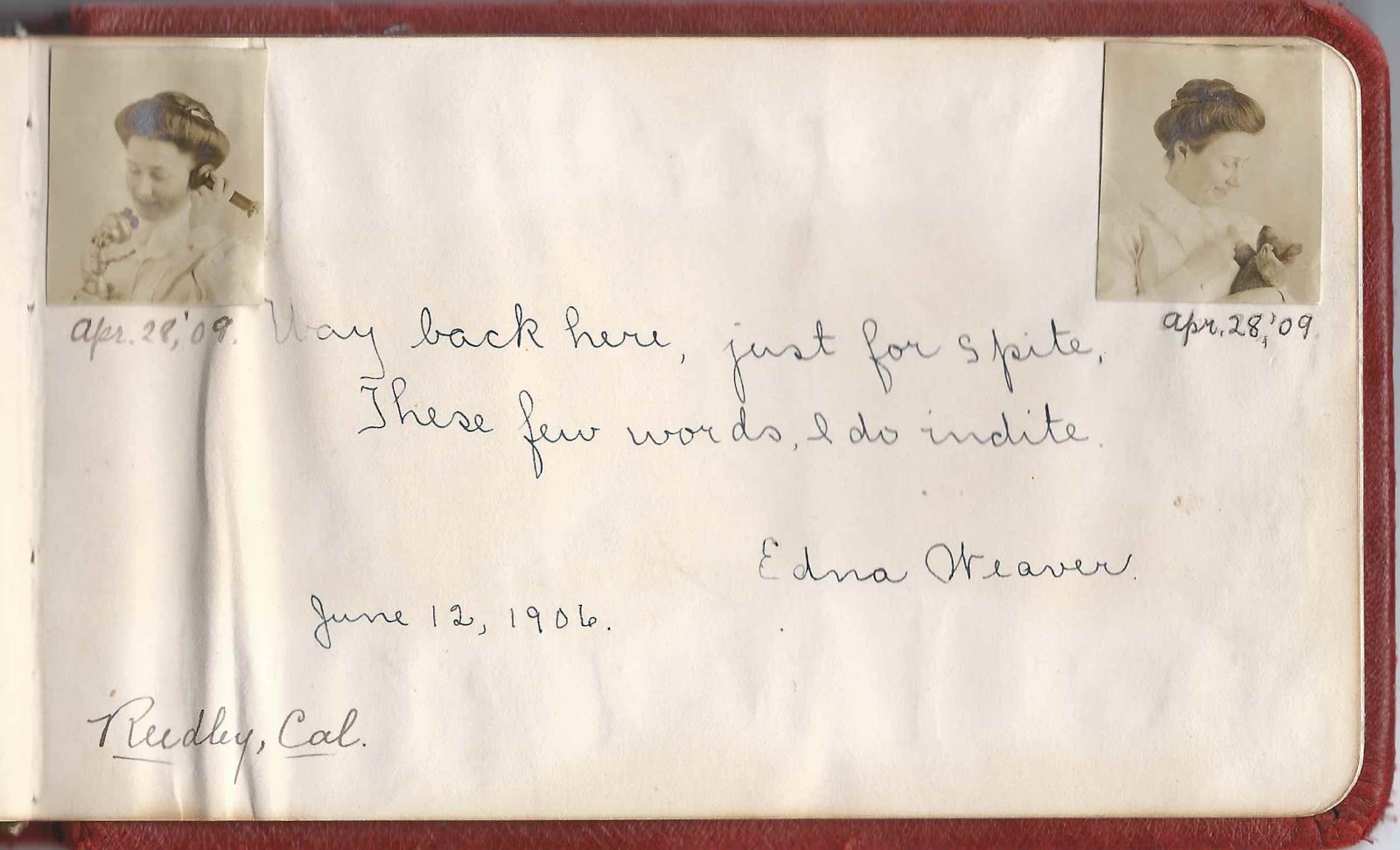 A photograph of signer W. B. Garvin was cut into a heart shape; wonder if there's a story there?   He signed his page on June 13, 1913.  If you can decipher his middle name, please leave a comment or contact me directly.  Note:  As you can see from the comments section, a reader has found that the signer was Walter Burns Garvin of Richford, Vermont. 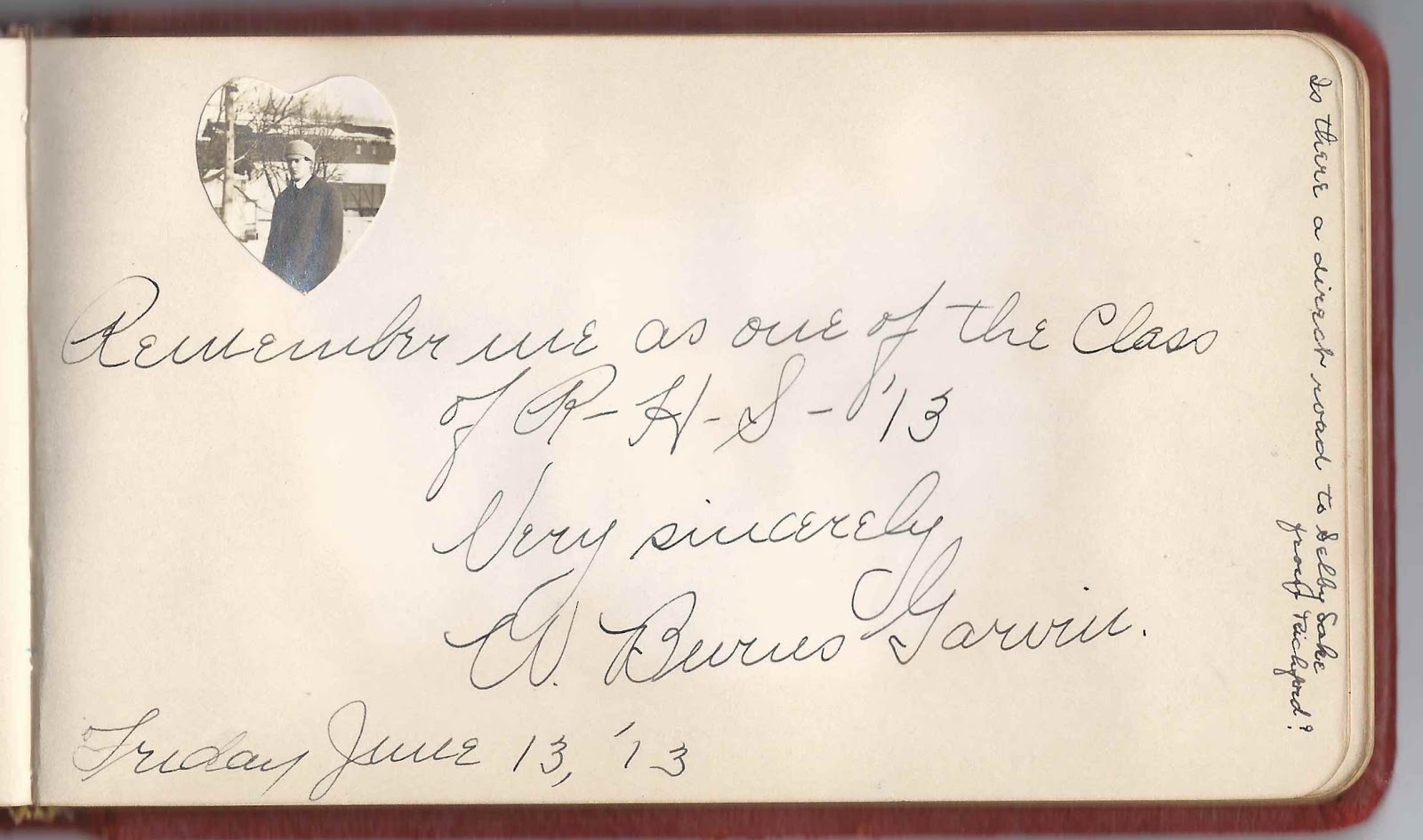 Joseph H. Plant of Lyndon Center, Vermont, who signed on June 10, 1911, pasted a bouquet on his page. 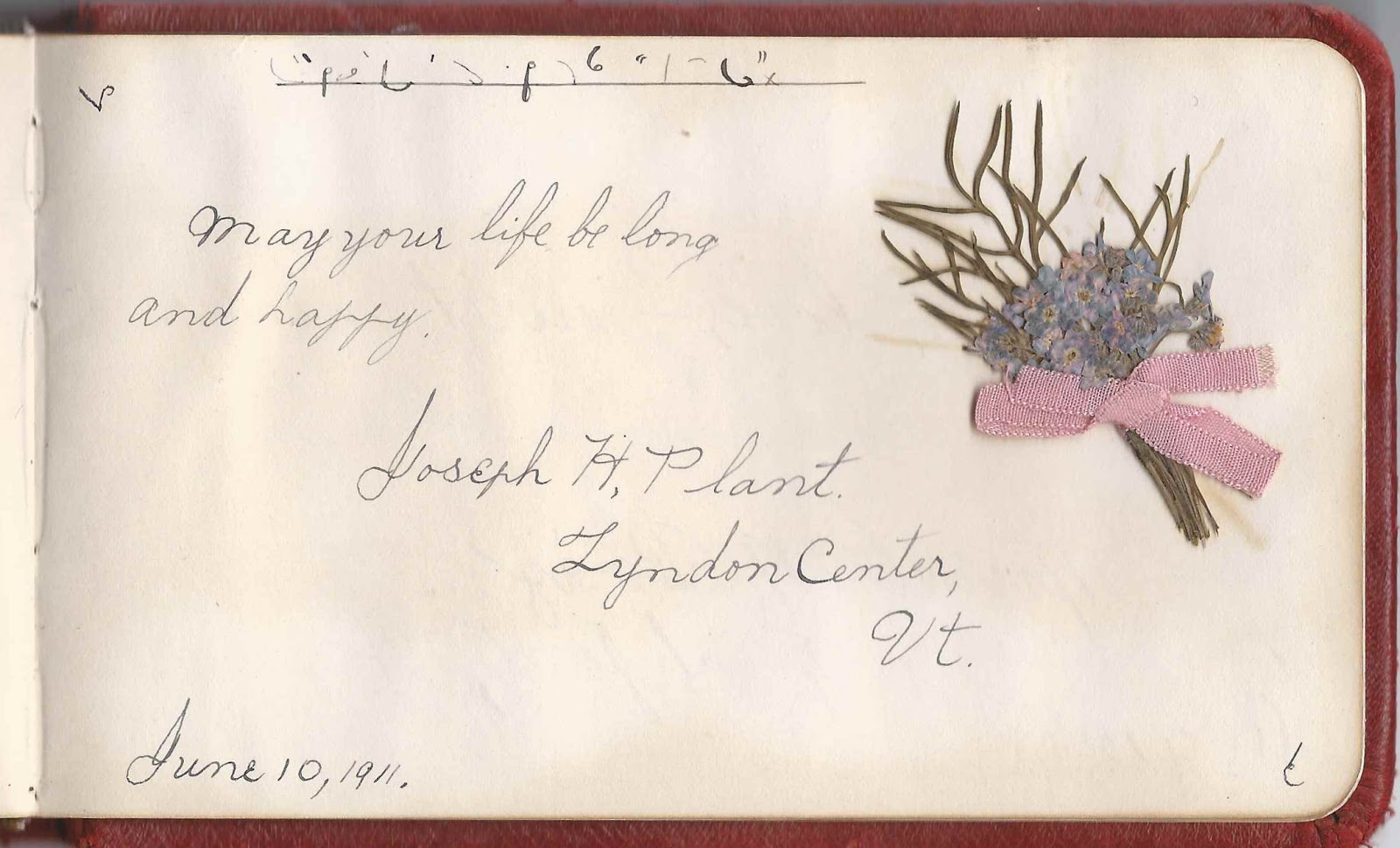 Surnames in the Album  [Some appear multiple times.]

List of signers:   [Note: Given names within a specific surname may not be in alphabetical order.]

Posted by Pam Beveridge at 8:25 AM