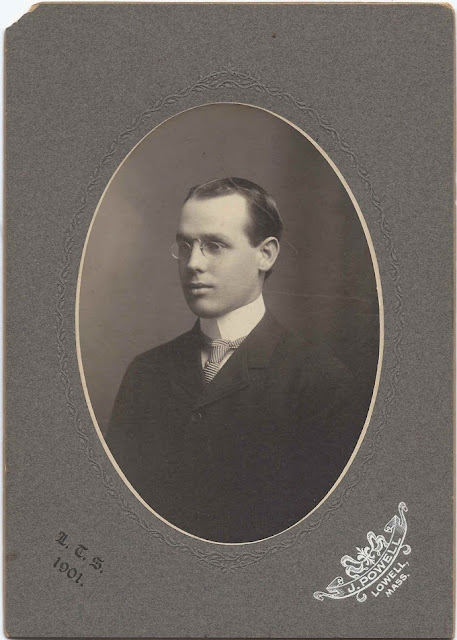 Note of June 27, 2014: this blog post has been edited as a result of new information provided by a reader's comment (see comments section.)
Photograph of a young man identified on the reverse as N. T. Ewer, who was Nathaniel Trull Ewer (1877-1935), taken by the studio of J. Powell of Lowell, Massachusetts.  Notations in the lower left front indicate that this was a 1901 graduation photograph from L.T.S., or Lowell Textile School. 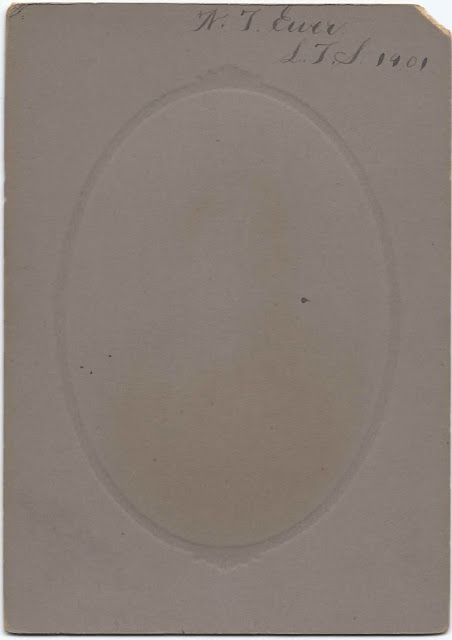 By the time of the 1910 Census, Nathaniel and Mabel were living at Chester, Delaware, and had two children, son Kendall Swint Ewer and daughter Priscilla Swint Ewer.  Nathaniel was working as chemist at a dye company.

By 1920, the family was living at Springfield, Delaware, and there was another child in the family, son Nathaniel, Jr.  Nathaniel, Sr., was still working as a chemist at a dye company.

Nathaniel Trull Ewer, Sr., received a patent in 1924 for a foam stablilizer.

If you have corrections to the information above, or additions to it, please leave a comment for the benefit of other researchers.

While researching Nathaniel Trull, I came across several articles about a Nat Ewer and the Lucy Evelyn, the Harrington, Maine-built three-masted schooner that spent her final years as a gift shop at Beach Haven, New Jersey.  Small world!  I remember the late Norman Nelson of Machias, Maine, reminiscing about his experience sailing on the Lucy Evelyn to Cape Horn in 1934, when he was 16.  Many years later, while driving down the Atlantic coast, Norman happened to pass through Beach Haven and was thunderstruck to see the Lucy Evelyn there.