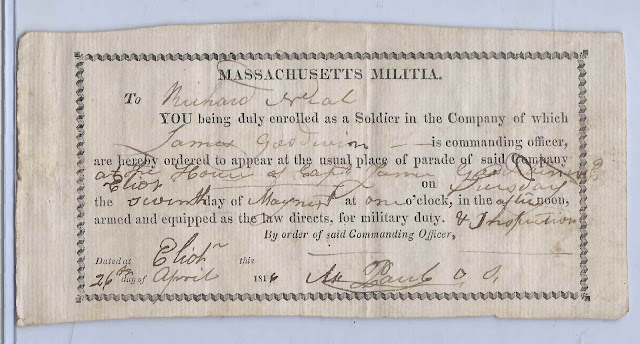 [Note: Be sure to read the comments section where a reader has provided crucial information.]

Small Massachusetts Militia document, a bit larger than 6-1/2" x 3", dated 26 April 1816, informing Richard Neal of Eliot, Maine, that he must appear at the house of Commanding Officer James Goodwin on Tuesday, 7 May 1816, and be armed and equipped for military duty.

Someone, presumably Richard, wrote a note to his mother on the reverse, advising that his health was not very good at present. 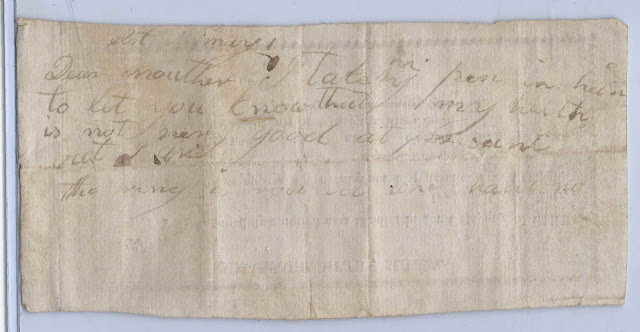 According to an online genealogy of the Goodwin family, on Richard married Elizabeth Goodwin, "Betsey", who was born 11 April 1788 at Kittery, Maine, the daughter of Daniel and Sarah (Hobbs) Goodwin.  They married 21 March 1819, according to an entry in the book Old Kittery and Her Families by Everett Schermerhorn Stackpole, published in 1903.

Tragically, again referring to the Goodwin genealogy, this Richard Neal, who was farming at the Neal Garrison on Goodwin Road in Eliot, killed his wife Betsey in a "fit of mental derangement" on 4 October 1825.

Read an account of the murder in the book America Bewitched: the Story of Witchcraft After Salem, written by Owen Davies, and published in 2013 by Oxford University Press.

By the time of the murder, the couple had three children, the youngest not even a year old:


Is it any wonder that three of the four children never married?  As to what happened to Richard after the murder of his wife, I don't know, except that he lived on until 1857.

If you have corrections to the information above, or if you feel that the Richard Neal in the military document is not the Richard Neal who married Betsey Goodwin, please leave a comment or contact me directly.  Thanks!

Posted by Pam Beveridge at 7:31 AM