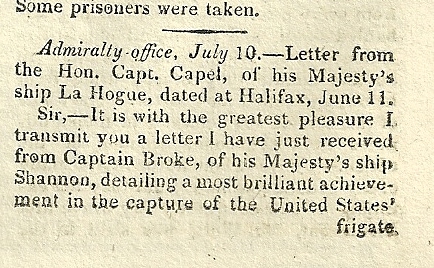 Article found in the September 1813 issue of the Gentlemen's Magazine, published in London by Sylvanus Urban, Gent., containing letters from British Navy officers Thomas Bladen Capel and Philip Broke regarding the capture of the US frigate Chesapeake by Broke's ship HMS Shannon, off the coast of Massachusetts.

Transcript follows the scans of the article. 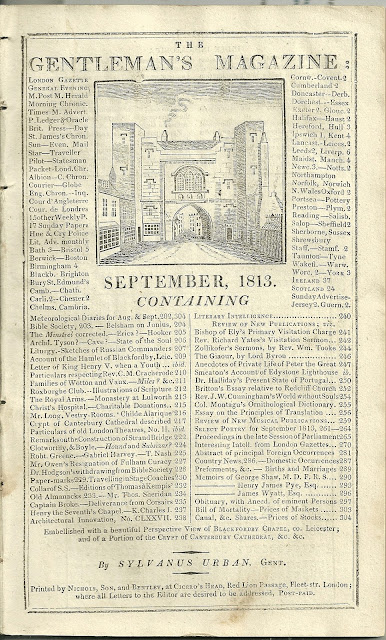 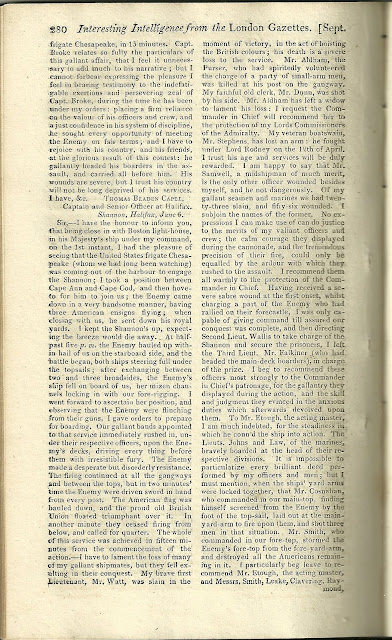 Admiralty -office, July 10.- Letter from the Hon. Capt. Capel, of his Majesty's ship La Hogue, dated at Halifax, June 11.
Sir, - It is with the greatest pleasure I transmit you a letter I have just received from Captain Broke, of his Majesty's ship Shannon, detailing a most brilliant achievement in the capture of the United States' frigate Chesapeake, in 15 minutes.  Capt. Broke relates so fully the particulars of this gallant affair, that I feel it unnecessary to add much to his narrative; but I cannot forbear expressing the pleasure I feel in bearing testimony to the indefatigable exertions and persevering zeal of Capt. Broke, during the time he has been under my orders; placing a firm reliance on the valour of his officers and crew, and a just confidence in his system of discipline, he sought every opportunity of meeting the Enemy on fair terms; and I have to rejoice with his country, and his friends, at the glorious result of this contest: he gallantly headed his boarders in the assault, and carried all before him.  His wounds are severe, but I trust his country will not be long deprived of his services.  I hae, &c. THOMAS BLADEN CAPEL, Captain and Senior Officer at Halifax.

Shannon, Halifax, June 6
Sir, - I have the honour to inform you, that being close in with Boston light-house in his Majesty's ship under my command, on the 1st instant, I had the pleasure of seeing that the United States frigate Chesapeake (whom we had long been watching) was coming out of the harbour to engage the Shannon; I took a position between Cape Ann and Cape Cod, and then hove-to for him to join us; the Enemy came down in a very handsome manner, having three American ensigns flying; when closing with us, he sent down his royal yards.  I kept the Shannon's up, expecting the breeze would die away.  At half-past five p.m. the Enemy hauled up within hail of us on the starboard side, and the battle began, both ships steering full under the topsails; after exchanging between two and three broadsides, the Enemy's ship fell on board of us, her mizen channels locking in with our fore-rigging.  I went forward to ascertain her position, and observing that the Enemy were flinching from their guns, I gave orders to prepare for boarding.  Our gallant bands appointed to that service immediately rushed in, under their respective officers, upon the Enemy's decks, driving every thing before them with irresistible fury.  The Enemy made a desperate but disorderly resistance.  The firing continued at all the gangways and between the tops, but in two minutes' time the Enemy were driven sword in hand from every post.  The American flag was hauled down, and the proud old British Union floated triumphant over it.  In another minute they ceased firing from below, and called for quarter.  The whole of this service was achieved in fifteen minutes from the commencement of the action. - I have to lament the loss of many of my gallant shipmates, but they fell exulting in their conquest.  My brave first Lieutenant, Mr. Watt, was slain in the moment of victory, in the act of hoisting the British colours; his death is a severe loss to the service.  Mr. Aldham, the Purser, who had spiritedly volunteered the charge of a party of small-arm men, was killed at hi spost on the gangway.  My faithful old clerk,Mr. Dunn, was shot by his side.  Mr. Aldham has left a widow to lament his loss;  I request the Commander in Chief will recommend her to the protection of my Lords Commissioners of the Admiralty.  My veteran boatswain, Mr. Stephens, has lost an arm: he fought under Lord Rodney on the 12th of April.  I trust his age and services will be duly rewarded.  I am happy to say that Mr. Samwell, a midshipman of much merit, is the only other officer wounded besides myself, and he not dangerously.  Of my gallant seamen and marines we had twenty-three slain, and fifty-six wounded.  I subjoin the names of the former.  No expressions I can make use of can do justice to the merits of my valiant officers and crew; the calm courage they displayed during the cannonade, and the tremendous precision of their fire, could only be equalled by the ardour with which they rushed to the assault.  I recommend them all warmly to the protection of the Commander in Chief.  Having received a severe sabre wound at the first onset, whilst charging a part of the Enemy who had rallied on their forecastle, I was only capable of giving command till assured our conquest was complete, and then directing Second Lieut. Wallis to take charge of the Shannon and secure the prisoners, I left the Third Lieut. Mr. Falkiner (who had headed the main-deck boarders) in charge of the prize.  I beg to recommend these officers most strongly to the Commander in Chief's patronage, for the gallantry they displayed during the action, and the skill and judgment they evinced in the anxious duties which afterwards devolved upon them.  To Mr. Etough, the acting master, I am much indebted, for the steadiness in which he conn'd the ship into action.  The Lieuts. Johns and Law, of the marines, bravely boarded at the head of their respective divisions.  It is impossible to particularize every brilliant deed performed by my officers and men; but I must mention, when the ships' yard-arms were locked together, that Mr. Cosnahan, who commanded in our main-top, finding himself screened from the Enemy by the foot of the top-sail, laid out at the main-yard-arm to fire upon them, and shot three men in that situation.  Mr. Smith, who commanded in our fore-top, stormed the Enemy's fore-top from the fore-yard-arm, and destroyed all the Americans remaining in it.  I particularly beg leave to recommend Mr. Etouch, the acting master, and Messrs. Smith, Leake, Clavering, Raymond, and Littlejohn, midshipmen.  This latter officer is the son of Capt. Littlejohn, who was slain in the Berwick.  The loss of the Enemy was about 70 killed, and 100 wounded.  Among the former were the four Lieutenants, a Lieutenant of marines, the master, and many other officers.  Capt. Lawrence is since dead of his wounds.  The Enemy came into action with a complement of four hundred and forty men; the Shannon having picked up some recaptured seamen, had three hundred and thirty.  The Chesapeake is a fine frigate, and mounts 49 guns, eighteen on her main deck, two-and-thirties on her quarter-deck and forecastle.  Both ships came out of action in the most beautiful order, their rigging appearing as perfect as if they had only been exchanging a salute.
I have, &c           P. B. V. BROKE
Capt. Hon. T. B. Capel, &c
Killed on board H.M.S. Shannon - G. T. L. Watt, First Lieutenant; G. Aldham, Purser; John Dunn, Captain' Clerk; fourteen seamen, four marine, and three supernumaries.

Some of the action between the Shannon and the Chesapeake could be seen from the Boston Lighthouse on Little Brewster Island, about 20 nautical miles away: