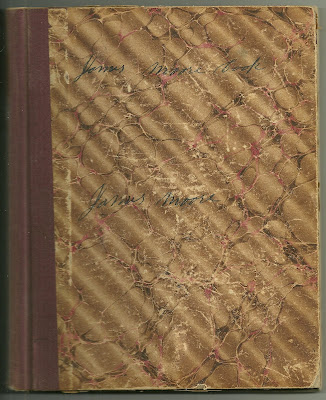 Diary of James Moore of the Lakewood area of Ellsworth, Maine.  He kept his diary very intermittently until 1901 when he became more conscientious about keeping it up.  If you look closely at the above image of the front cover, you will see his name, twice.

James Moore was born 30 May 1837 in Maine, the son of Gary Townsend Moore and wife Miriam (Garland) Moore. His paternal grandparents were John, Jr. and Polly (Townsend) Moore. His maternal grandparents were Josiah and Sarah "Sally" (Swett) Garland.
On 21 August 1858 he married Laura Ann Garland, who was born 5 February 1838, at Ellsworth, Maine, the daughter of Leonard Jarvis Garland and wife Azuba A. "Zuby" (Moore) Garland. Her paternal grandparents were Josiah and Sarah "Sally" (Swett) Garland. Her maternal grandparents were Edward and Elizabeth B. "Betsey" (Maddocks) Moore.
James and Laura A. (Garland) Moore had four children that I could find, perhaps more. They and their children were:
James Moore died 27 March 1903, an event that a reader of the diary knows, sadly, is coming. His wife Laura Ann (Garland) Moore died 22 May 1921.
The diary described above was found with four other diaries that were kept by James' daughter-in-law Vesta Estella (Garland) Moore.
For more information on the Moore and Garland families, see the page for James and Laura A. (Garland) Moore at the Maine and Maritime Canada Genealogy network.
If you have any corrections, additions or insights regarding the information provided here, please leave a comment or contact me directly. Thanks!

Transcript of July 1901 entries:
July 1, 1901.  Simon Garland commenced driving the mail from Lakewood to Ellsworth Falls.  Whitmore Garland commenced haying in Uncle John Moore’s field today.  I have been doing little of everything.  Scott been down town with a load of wood.


July 2.  Whit broke his mowing machine.  He was to work for his father.  Some smart showers today.

Ellsworth, July 3, 1901.  Wednesday.  July 3 I been mowing down in the field that Scott Moor bought of John R. Moore.  Lornenda A. Garland and Nora Moore been down to Ellsworth Falls this afternoon.  Lorenda lost one bushel of corn and fifty cents worth of sugar, 2 bars of soap and I took her horse and went back to John and found her sugar and soap.  The corn was gone.

July 6.  Scott Moore went down to the Falls to get the raking machine wheels Saturday and he brought John Moore and Ellen his wife from Boston up home and John and I went to the free Christians Conference this afternoon.

Ellsworth, July 7, 1901.  Rained this forenoon.  Brother John and I went up to Mariaville to go to meeting but there weren’t any.  We have been to the prayer meeting this evening.

July 8.  John Moore and I took the horse and went out to [? Han***] beach this forenoon.  This afternoon we went down to Uncle Charles Garland’s sand beach.  Scott Moore is to work on the [Sedge Brook?] bridge.  Finished the bridge today.

July 9.  Scott Moore and I commenced haying today in earnest.  Laura A. Moore and I went down to see Lorenda Moore her sister tonight.  She is real sick.  John Moore went up to Mrs. Wilber’s this forenoon.

July 13.  Scott Moore has gone down town.  Brother John Moore has gone down with him.  John is going to William Moore’s to stop one day, and from there to Edmund Hopkins in Trenton to stop a few days and will start for Boston next Thursday.  Simon Garland went up to Mrs. Dely Wilber’s and got Ellen Moore and carried her down town.

July 14.  Laura and I went up to meeting in Mariabille.  Mrs. Thurlow preached.  Ada Garland and Aunt Eda Garland was there to meeting.  When we got home, Mary Ann Grindal was there.

July 17.  Scott Moore and I hauled in 4 loads of hay.  Finished hauling in hay in the upper field.  Scott commenced mowing in the swale.

July 18.  I been down town to see Dr. Phillips.  I have got a bladder trouble.  Laura went down to Fred Frazier’s and we got dinner with them.  John R. Moore and Howard Moore took supper to our house.  They was here through the most of the shower.  John put two loads of hay in the barn he sold to Scott.

July 20, 1901.  Scott has been downtown and Vesta wnet down to Fred Frazier’s.  Scott got a barrel of flour and bought some grass of Leonard Garland and gave him 9 dollars.  I mowed some in the swale.

July 22.  Scott Moore is down to Leonard Garland’s mowing some grass he bought of him.

July 23.  I been down to Leonard Garland’s place with Scott Moore and hauled home a load of hay.  Nora Moore went back with the horse this afternoon and Scott hauled home a load of hay tonight.  Ada Garland and Mary Garland was up to our house today.
Lorenda A. Garland went down to Edmond Hopkins in Trenton today and carried down some peas and some blueberries for Nora Moore.  May and Fanny went down with her.

July 24.  Leonard Garland took Scott’s horse and hauled him up a load of hay and put the horse in the buggy and went back for Scott to have her come home.  We had a heavy shower.  John R. Moore hauled in his last load of hay from Abner Frazier’s place.  He had 8 loads.

July, Saturday 27, 1901.  I went down town this forenoon to carry down butter and get the wheeltires set.  Scott Moore finished up haying down to Leonard Garland’s today.  He got 3 tons of hay.

July, Sunday, 28.  Laura & I been to Mariaville to meeting.  Had a nice meeting.  Mrs. Thurlow preached.  Rained some today.

July 31, 1901.  Scott Moore went up to Mariaville to see George Black about meadow hay.  Could not get any.


A map of the Lakewood District of Ellsworth, Maine:


Thanks for stopping by!
.
Posted by Pam Beveridge at 2:36 AM