1847 letter from City of Bangor, Maine to Town of Athens regarding the Loring Plummer family 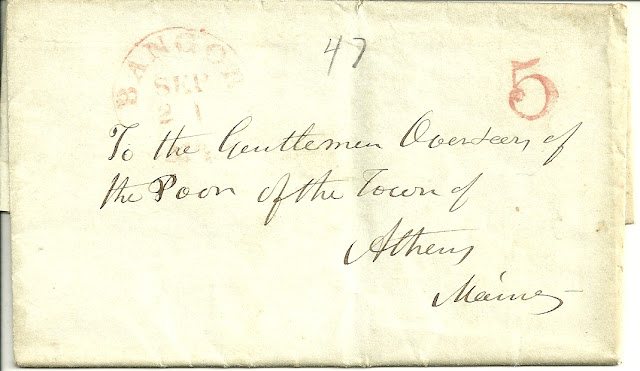 September 18, 1847 letter from the City of Bangor to the Gentlemen Overseers of the Poor of the Town of Athens, Maine, regarding the family of Loring Plummer who continued to be in need of assistance. 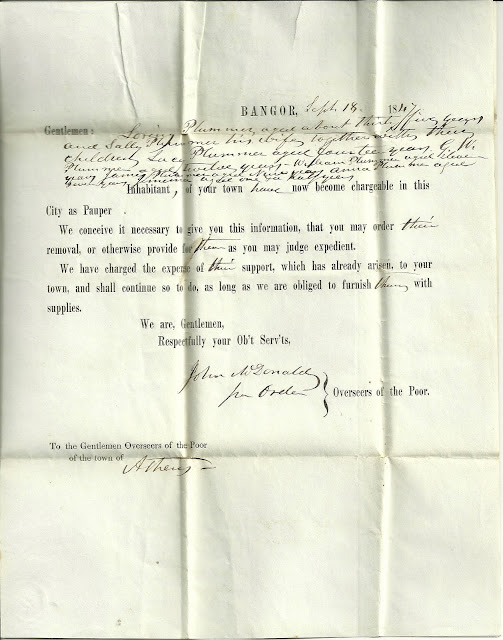 The letter was signed by John McDonald, representing the Overseers of the Poor of the City of Bangor, Maine.


This letter was the subject of a short article by a Massachusetts author in the May 2010 issue of the Maine Genealogist.  There was no image accompanying it.  When I first read the article back then, I had no idea that it was a letter I had purchased myself on eBay in 2009, recently come to light.


Loring Plummer was born 2 April 1811 at Brighton, Maine, the son of William and Betsey Plummer or Plumer.  Loring had a brother Horace Plummer, born 19 June 1815, also in Brighton.  [Some online sources are erroneously indexed as Bridgton, Maine; it pays to read actual records oneself - and to have visited many of the cities and towns of Maine.]

Loring married Sarah Sally Grant, who was born 25 October 1816, presumably in the Somerset County area.  I wonder what desperate circumstances drove the family to Bangor in the late summer of 1847.

Their children, mentioned in the letter, were:

Loring and Sally Plummer eventually moved to Dover, Maine, in Piscataquis County.  I hope their lives took a better turn.

Posted by Pam Beveridge at 4:06 PM